Having long vowed to offer complimentary Internet browsing to passengers, Delta Air Lines this week signaled it is ready to make good on its commitment, with CEO Ed Bastian promising from the floor of CES in Las Vegas that members of the carrier’s SkyMiles frequent flyer program will be able to avail of free Wi-Fi, with T-Mobile as sponsor, beginning on 1 February and on 700 Viasat Ka-band IFC-equipped domestic aircraft by the end of the year.

But while it’s certainly notable that a major US airline is ready to offer free Wi-Fi on most domestic flights, Delta is technically not a pioneer in this regard. JetBlue Airways has provided free Viasat-powered Internet to passengers for nearly ten years. And outside of the United States, a cluster of carriers have also seen fit to support this complimentary amenity.

Take Intelsat customer Japan Airlines, for instance. In 2017, JAL announced it would provide free Internet access to all customers flying on domestic routes, as supported by a traditional Gogo (now Intelsat) Ku-band airborne connectivity system which had been fitted years earlier to some 77 JAL aircraft, including Boeing 737s, 767s and 777s.

Now Japan Airlines has announced it is extending free onboard Internet to its Embraer E190 fleet, having already installed Intelsat’s more advanced 2Ku IFC solution on the first of 14 E190s operated by its regional commuter subsidiary, J-AIR.

The E190s previously only offered wireless IFE to passengers. By the fall of 2024, when 2Ku installs are completed, they’ll offer both solutions, making J-AIR the first regional operator in Japan to offer both inflight entertainment and connectivity, as well as the first E190 aircraft equipped globally with the Intelsat 2Ku system.

“Adding 2Ku will enable the same free inflight Internet experience they have had since 2017 on the larger jets. For Intelsat, this is a great showcase for other E190 operators around the world who want to offer a free service to all their passengers,” says Dave Bijur, senior vice president of Commercial for Intelsat Commercial Aviation.

The 2Ku package is optimized for larger transport aircraft. But Japan Airlines and Intelsat have nonetheless seen fit to bring it to the 2-2 configured E190.

Separately, Intelsat is working with cable and wiring specialist Carlisle Interconnect Technologies to bring to market a new broadband inflight connectivity solution that can operate seamlessly on NGSO and GEO networks and is optimized for the narrower fuselages of regional jets.

The low-profile, low-power Ka1717-branded package for regional jets will compete with a new breed of electronically steerable antennas as well as nextgen air-to-ground offerings in North America and elsewhere. 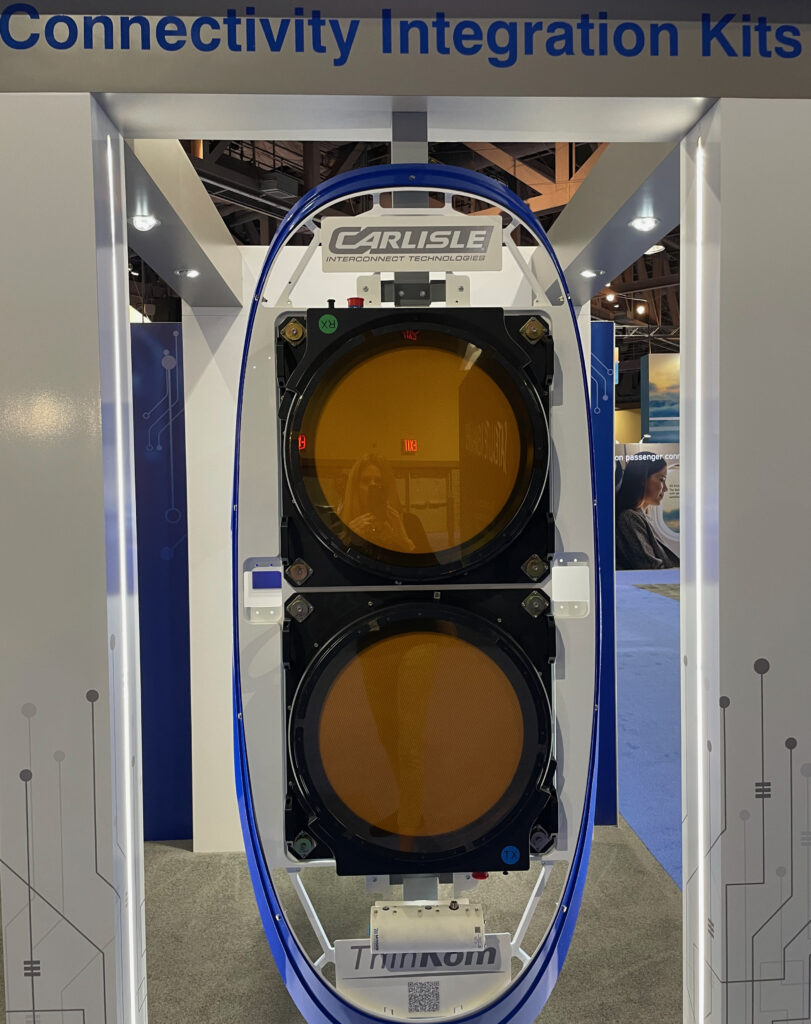 During an interview with Runway Girl Network at the APEX/IFSA EXPO in Long Beach, CarlisleIT director of sales, Asia Pacific Jerome Viagas explained that his firm “is providing all the structures and the adapter plate, the radome and all the integration and certification package to integrate these antennas to the aircraft and make sure we have the whole structural package in order to adapt these antennas to the aircraft.”

Whether Delta will consider this IFC package for regional jet equipage remains to be seen. Delta reported from CES that it plans to bring free Wi-Fi on international and regional aircraft by the end of 2024. Its regional jets are currently fitted with air-to-ground connectivity, as managed by Intelsat (and as supported by the Gogo Business Aviation network). And Intelsat’s Ku-band and 2Ku IFC solutions are fitted to Delta longhaul aircraft at present (the carrier’s IFC commitment on the A330s and A350s expired in July 2022). Meanwhile, tying loyalty to free Wi-Fi, as Delta has done, is a growing trend.