Boasting over 70 airline customers around the globe, FlightPath3D is best known for delighting passengers by supplying 3D inflight moving map software that runs on both in-seat and wireless IFE systems. But the product innovation company is now able to go far beyond its original “where am I now?” map story to enable passengers to ascertain “where else could I fly?” and then proceed to design their future travel itinerary in-flight and share it with their social networks.

“[W]e’ve mashed up maps, video, and flight data into a single product, offering what could be more akin to inflight travel management, and you can take your guide off the plane,” FlightPath3D CEO Duncan Jackson explained to Runway Girl Network during an interview at the APEX/IFSA Exhibition in Long Beach. 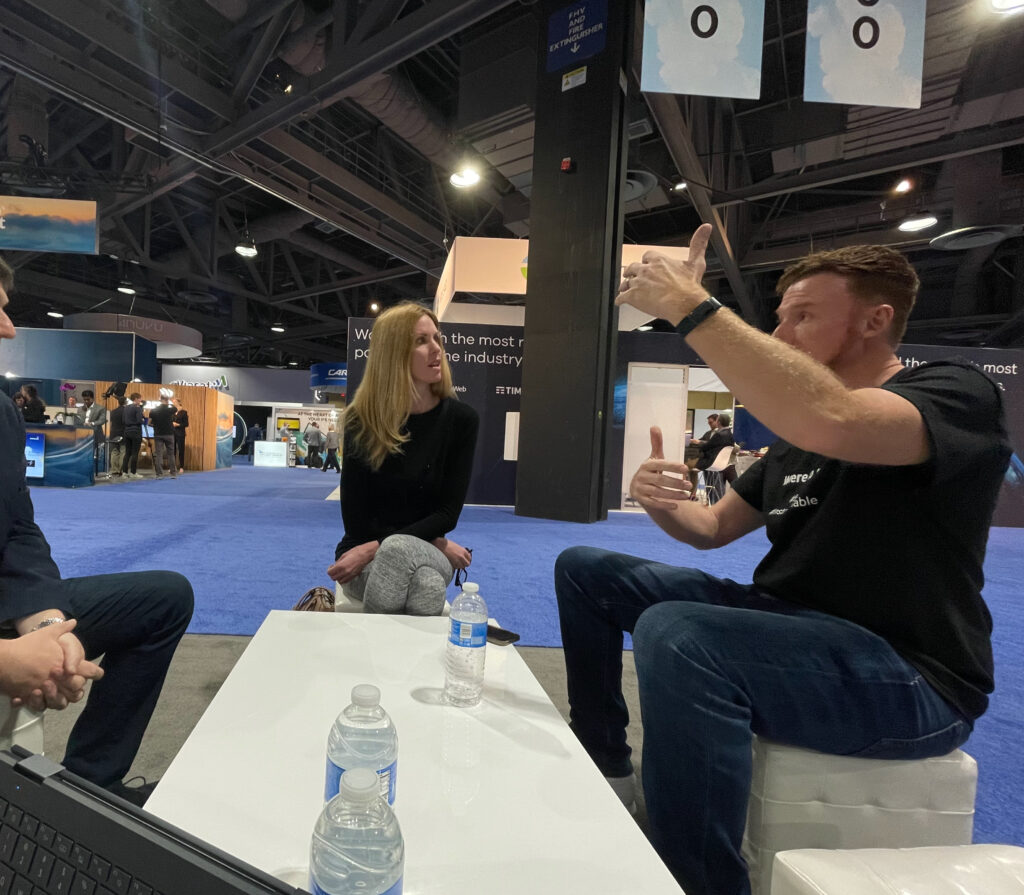 Observing that the number one travel inspiration platforms are no longer Google and Tripadvisor, but rather Instagram and short-form video platform TikTok — with the #travel hashtag generating many billions of views a year — FlightPath3D two years ago decided to build a video “experiential” map platform, called WhereWeFly.

The WhereWeFly application gives passengers access to the airline moving map and a virtual flight deck view, as usual, but also enables them to dive down deeper into destination videos to not only learn about things to do at their destination, but to build an itinerary for those activities if they so choose, and even book experiences in-flight.

For aircraft that do not offer live inflight connectivity, said Jackson, “we can pass that interest via QR code or some other point activation.” But he noted that connectivity “is becoming so pervasive”, so bookings can be made in real-time in these connected environments. 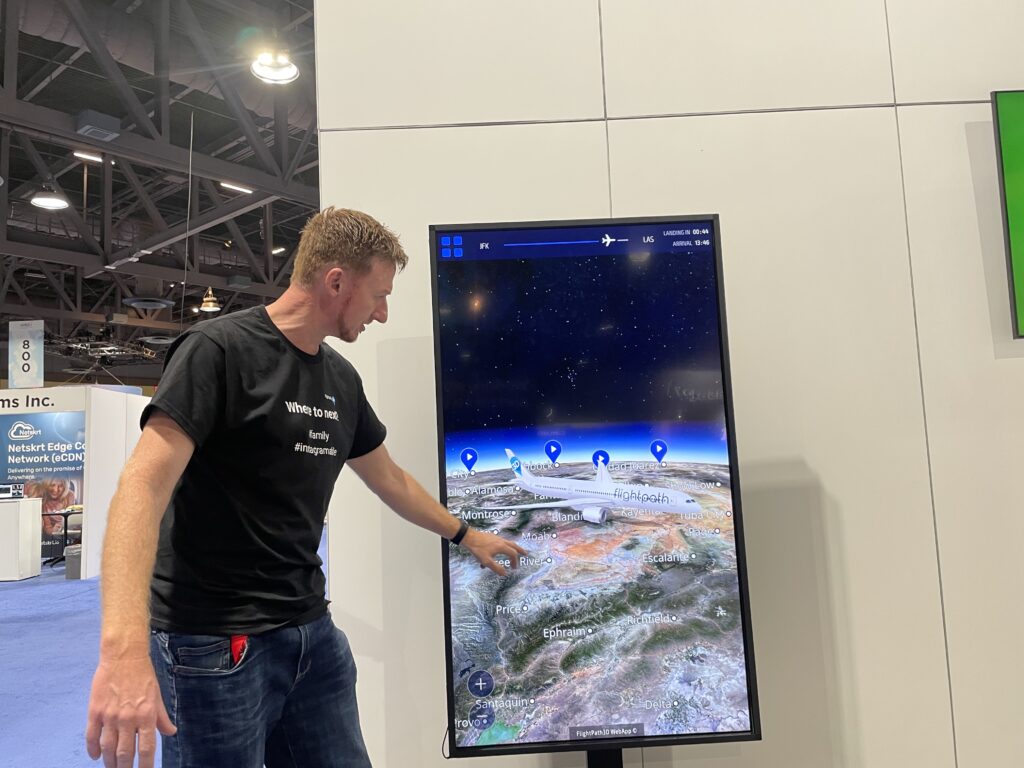 Jackson provided an example of a flight from New York JFK to Las Vegas. Onboard the aircraft, a passenger might receive a notification to their mobile device, showcasing things to do when in Vegas, such as the Strip, the High Roller Ferris Wheel, and other famous spots. The passenger can then drop into the airline’s FlightPath3D-powered, fully immersive WhereWeFly platform, check out all the things they may want to do in Las Vegas, and swipe right for more information, including Michelin Guide content that provides great tips on what to do. They can then build their itinerary from there.

But the passenger might also opt to build an itinerary for future travel. This too is supported because the passenger can access a searchable directory of the airline’s route map, look at the network, zoom in and click on a location, and search for the best beaches, for instance, and other great things to do. 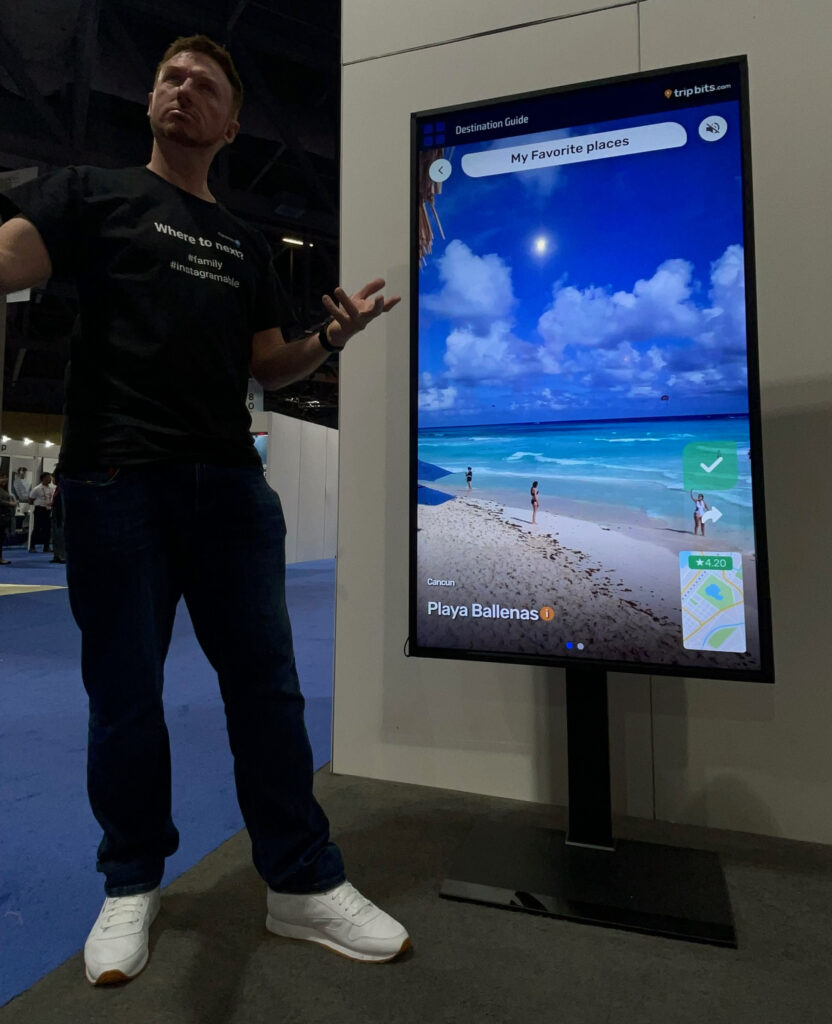 Moreover, a data cloud can tell the passenger what’s trending right now for architecture, family friendly events, and other types of travel experiences. “So, there’s the layer of the map,” for those who simply want flight information “or you can get immersive, a bit like Google Street View, and dive into a video of things to do. But then behind that is another layer of all the flight schedule and routes to get you there,” explained Jackson. 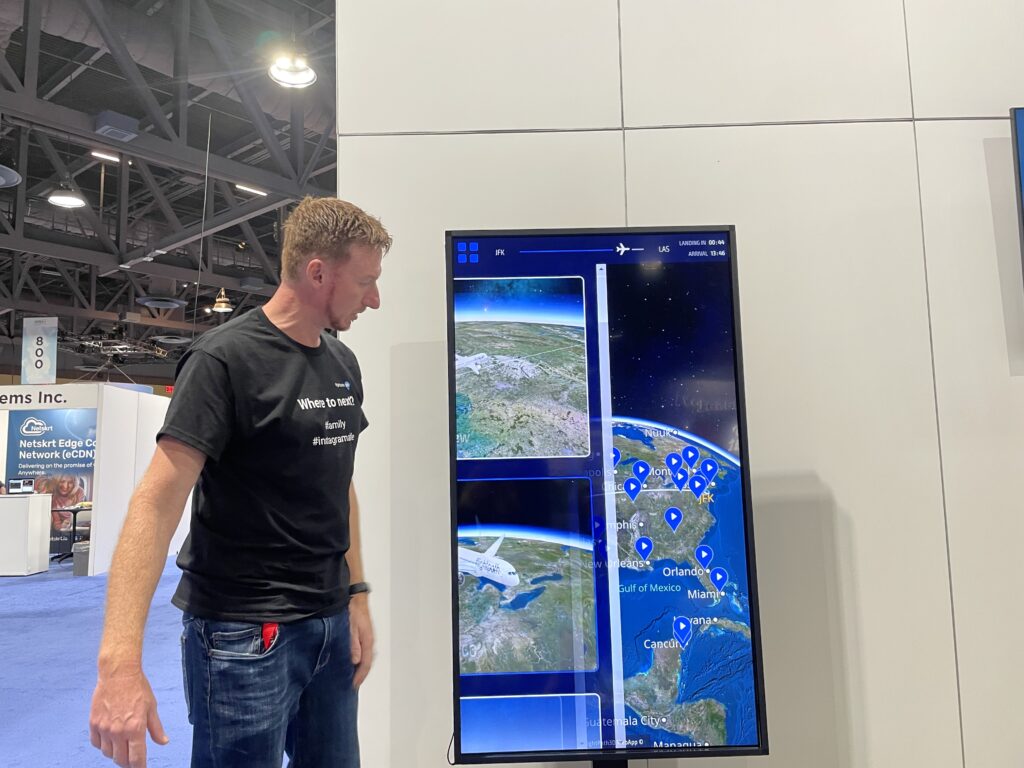 Air Canada last year launched the WhereWeFly interactive route map, deploying it on its Panasonic Avionics seatback IFE systems, as well as on aircraft fitted with Thales’ wireless portal as accessed by passengers on their own devices.

“In one click, Air Canada’s hubs are instantly showcased presenting all routes from their primary global hub in Toronto (YYZ), or from Montreal (YUL), a principal gateway to French and other international markets, or Vancouver (YVR), the airline’s premier gateway to the Asia-Pacific,” noted FlightPath3D at the time. “Passengers can plan their next trip right inside the inflight entertainment map.” 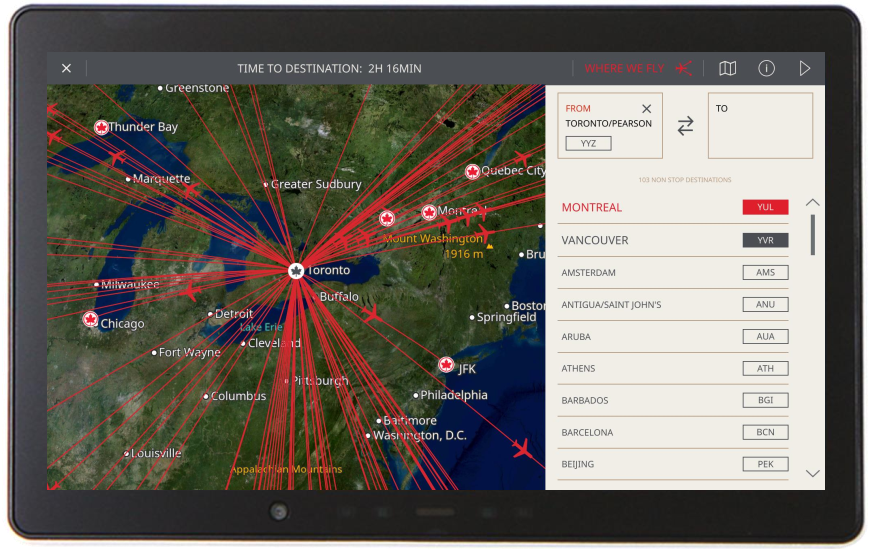 To be clear, FlightPath3D doesn’t take content from TikTok or Instagram, which would create content licensing challenges and associated costs. Instead, its experiential platform features FlightPath3D’s own compelling videos. Jackson revealed:

So, we’ve now got the largest library of video ‘points of interest’ probably out there. We have 100-plus ambassadors shooting content for us all around the world.

They’re traveling around the world and they get paid for generating the content for us and they’re pumping it through the network.

Notably, Southwest Airlines last year signed on for destination reels, offering content for 118 cities at launch, said Jackson. “So, we went to shoot in Boise [and] Las Vegas and at launch we had thousands of videos in-flight for people to go experience [content-wise for free] in all the locations, and people are absolutely addicted to swiping through, saving, sharing our new video platform.”

Indeed, passengers can share their itineraries via the usual social media channels.

The FlightPath3D CEO reckons that a good portion of the firm’s current moving map customers will upgrade to this far more immersive and sharable experience. “Based on the interest today,” he said at the APEX/IFSA EXPO in late October, “I see a very promising rollout of some of the leading brands. So we are doing what we do best, which is bring the right product to market and hope that makes sense for an airline.”

But in a fascinating evolution for FlightPath3D, the company is now enabling this type of travel management functionality on the ground and paired with airports’ full flight schedules and videos.

“We’ve just gone live in Heathrow in the last six weeks and we’re building a kiosk version to operate throughout the airports or sit in a business class [lounge]. So you’re looking at a product that can live in a mobile device, on the airport’s website,” said Jackson, in addition to the airline’s version being accessible in-flight via the FlightPath3D-supported moving map IFE application.

“We literally had airports fly on Southwest and Air Canada, came to us and said ‘it’s better than our website experience’.”

And so, in helping passengers to design and book their own itineraries via the key touchpoint of the moving map — and inspiring their future travel to new destinations — FlightPath3D has evolved into something far beyond an inflight moving map solutions provider.

Little wonder, then, that several EXPO attendees confided to RGN that WhereWeFly was among the best innovations on the show floor. Given the seismic level of digital innovation on display, that’s really saying something. 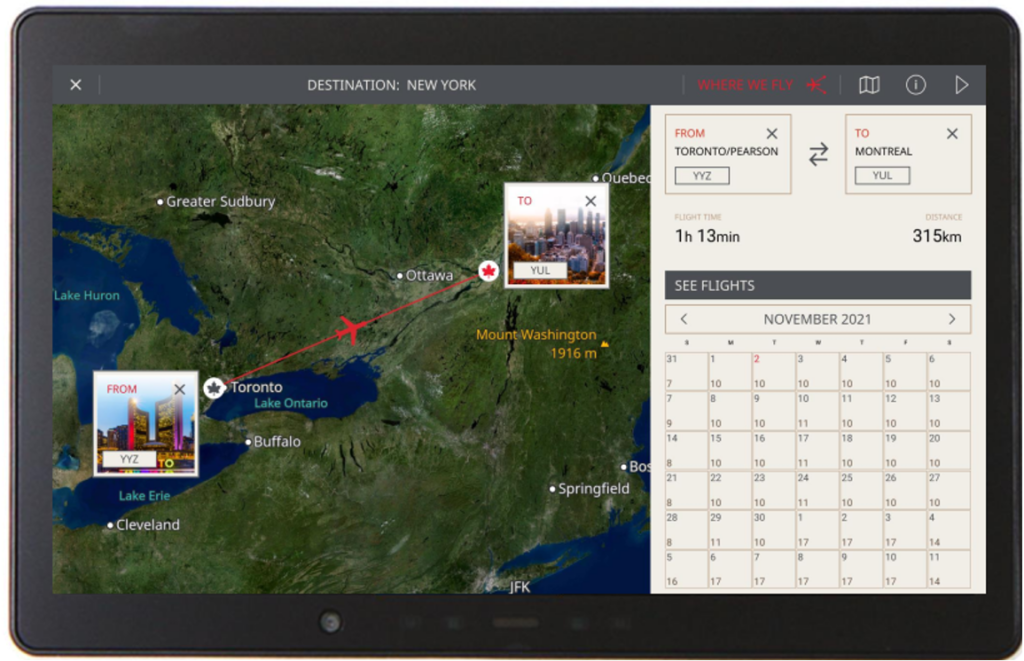 Passengers can plan their trip with WhereWeFly on Air Canada’s IFE. Image: FlightPath3D