With two legs down in my Canadian Air Carrier Extravaganza, West-Coast Edition —  first on Lynx Air and then Flair Airlines —  it was time for a slightly different kind of adventure: flying a WestJet Link Saab 340 turboprop from Vancouver back to Calgary via Cranbrook, a small airport nestled in the Canadian Rockies.

Canadian regional Pacific Coastal Airlines operates feeder flights for WestJet under the WestJet Link brand. I discovered the Vancouver-Cranbrook-Calgary routing on Google Flights, with a very low price of CAD $134 (prices from here on out will be in CAD).

Google linked me over to WestJet’s website to complete the booking, and incredibly the itinerary appeared at the quoted fare. For kicks, I attempted to replicate the fare directly on the site, and couldn’t do it: the fare jumped to over $400. How Google found it and got it to work I don’t know. And maybe it’s best to simply accept the fact that it did, and enjoy. 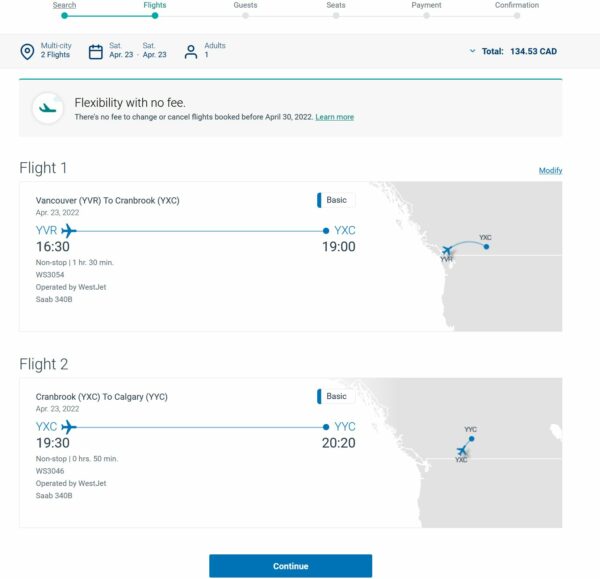 The remainder of the booking process was straightforward, albeit surprising. WestJet offers two fare classes technically, but functionally offers four. On the face of it, there’s economy and premium, but each has its own refundable options that come (or don’t come) with a variety of seat choices and bags and fee charts. In all cases, carry-ons are included in the price. 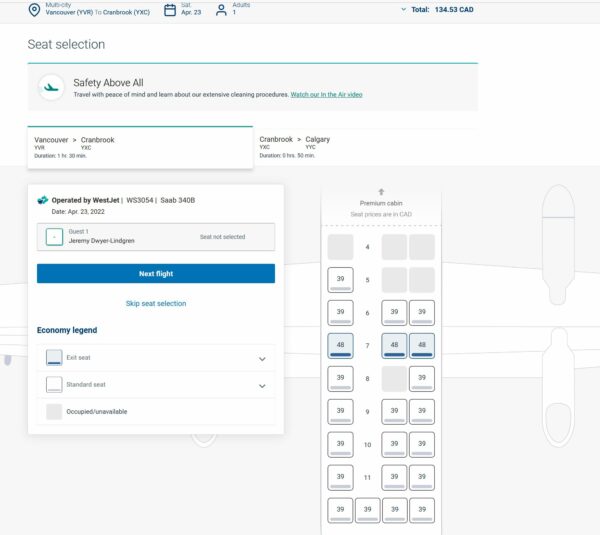 Having chosen the basic economy fare, checked bags were not free. I didn’t have one so it didn’t matter. Seat selection was also not free. I’m normally perfectly happy to pay for a window seat, especially considering that I booked this routing specifically to fly aboard the Saab 340 — a flight that in good weather is effectively a sightseeing adventure over the Canadian Rockies. But the fees were downright obscene.

The cheapest seat choice on the tiny, 34-seat turboprop for the first leg was $39. The second flight, only 40 minutes long on the same small plane, was $42. That included the middle seat in the very back. I’ve paid less to select seats on ten-hour transatlantic flights.

The most expensive exit row seats sold for $50, while the first three rows were marked premium cabin and off limits altogether (honestly what does premium cabin look like on a Saab 340?!). Wild.

At least I had a window seat, though.

The next afternoon the gate agent boarded by zone at the end of Vancouver’s A pier. After a long walk down an abnormally long commuter zone, the WestJet Link-painted Saab 340 came into view. 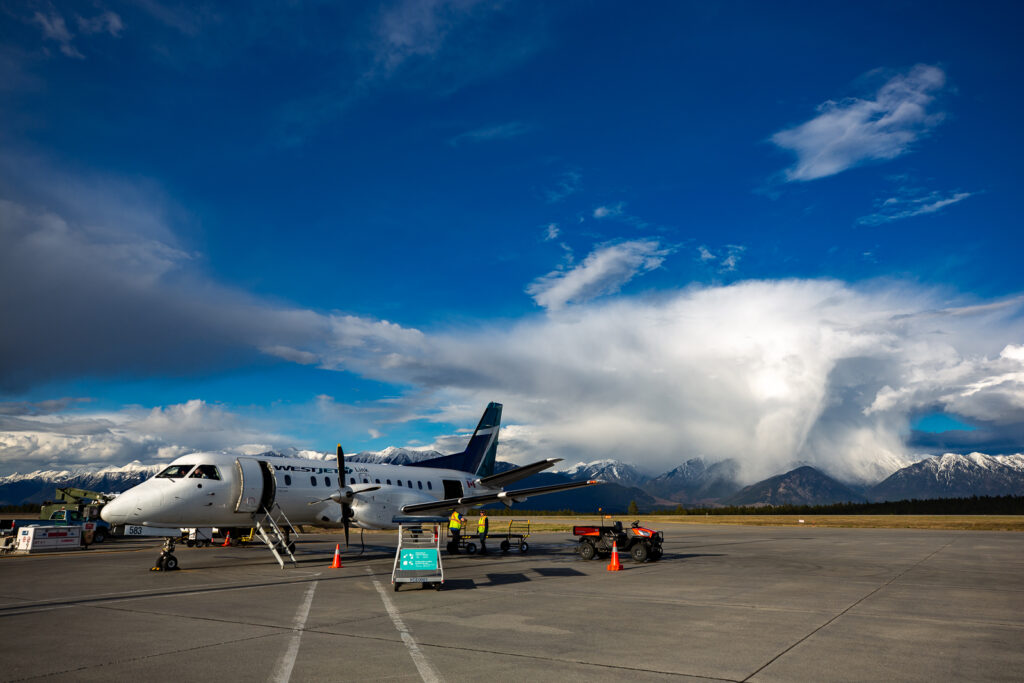 I climbed up the stairs into the tiny airplane and settled into seat 11A, which was chosen at random at check-in and in the penultimate row. The aircraft is configured in a 1-2 layout, except the final row which was laid out in a solid five-across arrangement. Unsurprisingly, there was no difference between what had been marked as premium seats and the rest of the cabin. My larger roller bag fit into the overheads, though it took some work. 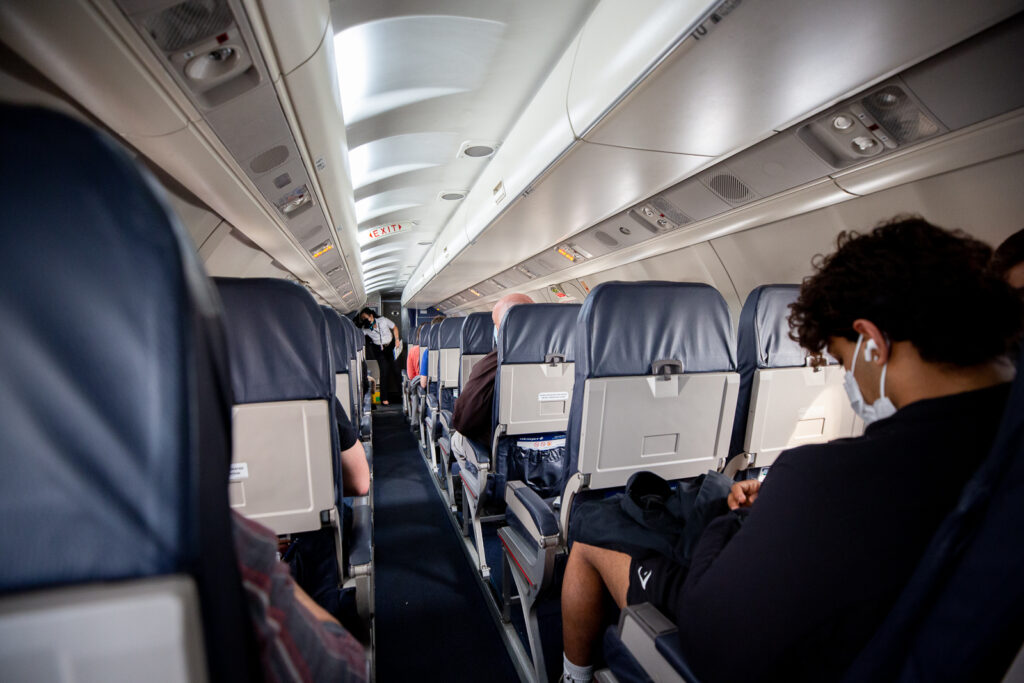 The cabin was clean but a bit worn, with probably few if any updates in its 25-year lifespan.

My concerns about changing seats were ultimately unnecessary. The cabin was maybe 60% full, and after a low, slow takeoff I was able to move about.

Not long after departure the lone flight attendant came through the aisle with a small trolley, offering beverages and a small snack for free. The chocolate-topped cookie was especially good, and it was nice to be offered something without having to present a credit card. 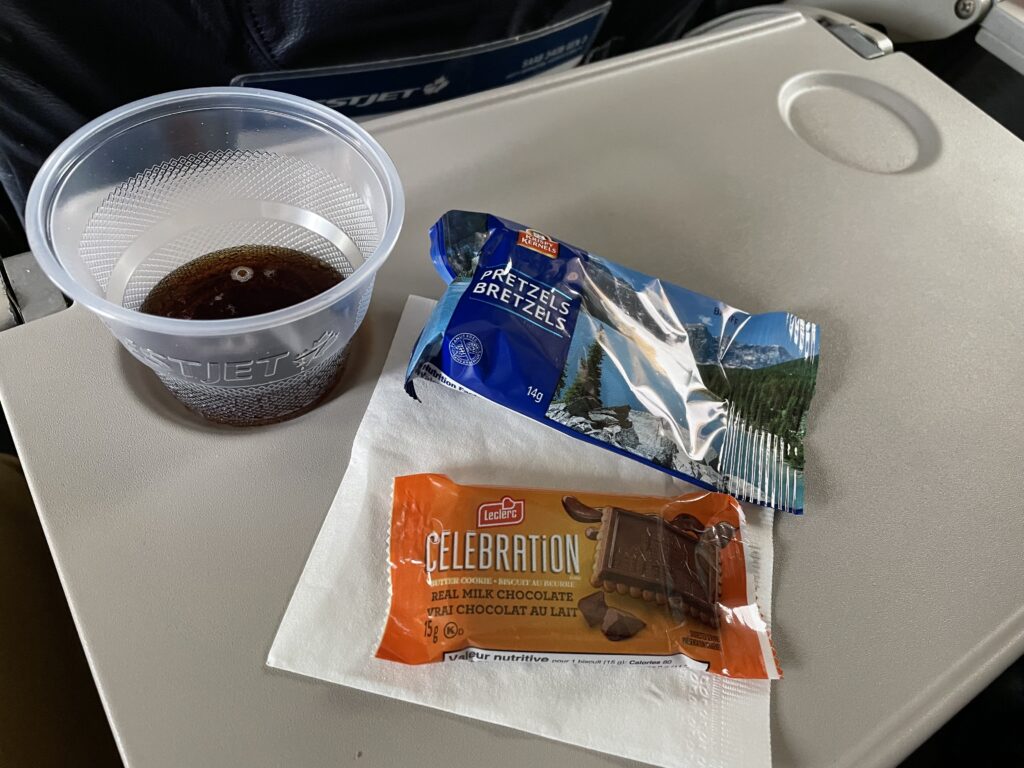 The aircraft has no Wi-Fi, no entertainment, and no power outlets.

What it does have are some of the best views of the Cascade and Rocky Mountain ranges that you’ll ever see. 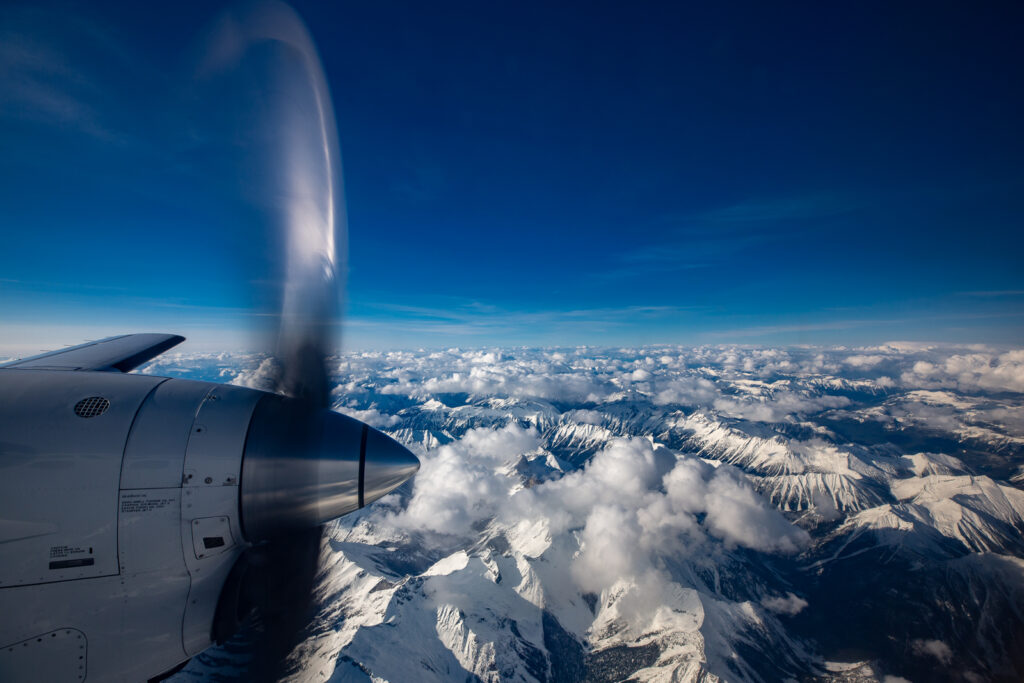 The views out the window, any window really, were absolutely stunning and among the best I’ve ever experienced.

The airplane landed in Cranbrook an hour and a half later, pulling into the very small but very nice airport under a blue sky and surrounded by snow-capped peaks.

Thirty minutes later we were back in the air, departing for Calgary. The flight was exactly the same as the first, only half the length.

Once again, the jaw-dropping views of the Rockies stole the show. What’s not to love about these spectacular views?

For the most part, you’re probably not going to fly this route unless you’re going to or from Cranbrook. If you get the chance, however, do it.

The crews are friendly, the plane is fun, and the views are out of this world.