SWISS will be offering Business and First Class guests a selection of the best top chefs’ creations of the past few years under its ‘SWISS Taste of Switzerland’ programme on long-haul services from Switzerland from the beginning of September. At the same time, SWISS is introducing a new Business Class service concept for all its long-haul flights that enables travellers to bring greater individuality to their air travel experience and decide for themselves when they want to eat during their flight.

For six months from today onwards, Swiss International Air Lines (SWISS) will be offering Business and First Class travellers on its long-haul services from Switzerland selected creations from top Swiss-based chefs who have participated in the airline’s ‘SWISS Taste of Switzerland’ inflight culinary programme over the past few years. The dishes, which are accompanied as usual by Swiss regional wines and speciality cheeses, reflect the broad variety of Switzerland’s cuisine. Of the 70 guest chefs drawn from all the country’s cantons who have been spotlighted on board since the award-winning programme began back in 2002, Silvia Manser, Silvio Germann, Jean-Marc Soldati, Mike Wehrle, Thomas Amstutz, Hans-Jörg and Anja Zingg, Franck Reynaud, Christian Kuchler, Lorenzo Albrici and Rolf Hiltl are currently featured aloft.

SWISS First travellers can look forward to two dishes from Mike Wehrle of Bürgenstock Hotels & Resorts: a starter of marinated lobster with pecorino cheese and cauliflower panna cotta, followed by veal tenderloin with black truffle sauce. The choice of main courses further includes sautéed cod with seafood nage and potato and fennel brandade, the creation of Silvio Germann of IGNIV by Andreas Caminada in Bad Ragaz. The SWISS First menu is rounded off by a choice of two desserts which includes a blueberry slice with chocolate crumble and Appenzeller beer ice cream by Silvia Manser of Restaurant Truube in Gais. 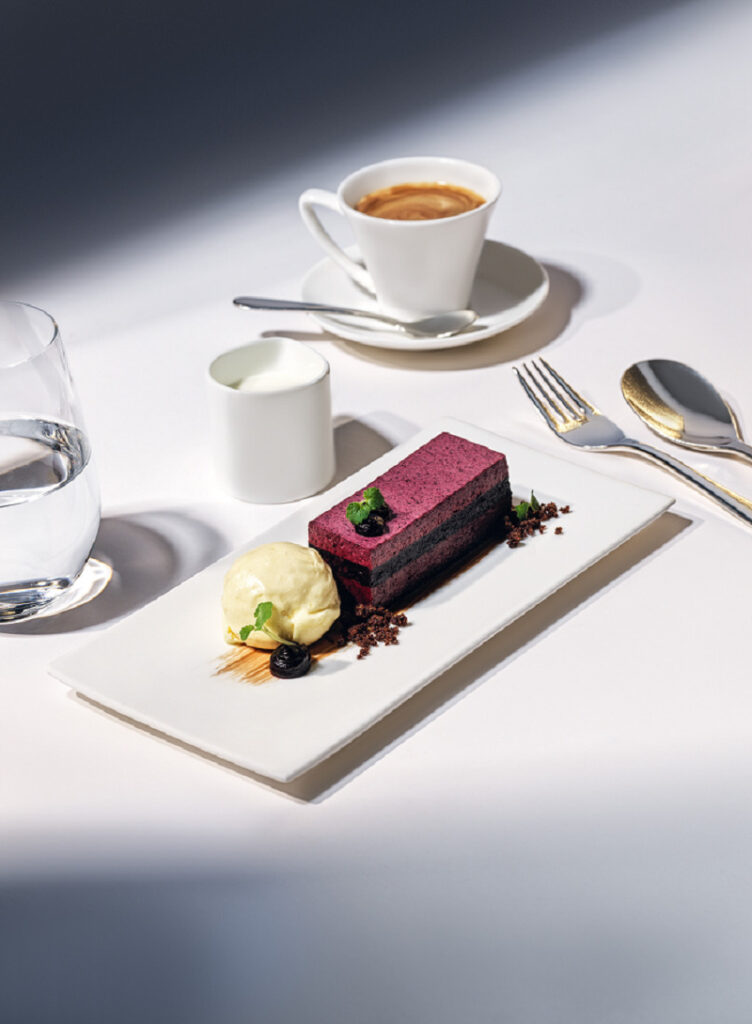 First Class guests are further treated to a selection of speciality Swiss cheeses that include an Aletsch Grand Cru from Canton Valais and a Swiss Style 10, which is Switzerland’s homage to Britain’s Stilton cheese. The choice of Swiss wines on offer extends to a Chasselas Clos du Boux 2020 Grand Cru Epesses from Luc Massy of Canton Vaud and a Ligornetto 2018 DOC Ticino red from Luigi Zanini of Canton Ticino.

For SWISS Business travellers, the choice of SWISS Taste of Switzerland starters newly extends to a vegetarian option: a beetroot tabbouleh with green pea guacamole from Zurich’s Hiltl vegetarian restaurant, which is offered alongside a Balik salmon sashimi with avocado, cucumber and wasabi vinaigrette by Christian Kuchler of the Taverne zum Schäfli in Wigoltingen. Business Class guests have a choice of main courses, too, which includes a ‘Meat Love’ meatloaf with morel sauce created by Anja and Hans-Jörg Zingg of the el paradiso Mountain Club in St. Moritz. The menu concludes with the sweet delight of a cheesecake with chocolate sponge and citrus fruits by Franck Reynaud of the Hostellerie du Pas de l’Ours in Crans-Montana. 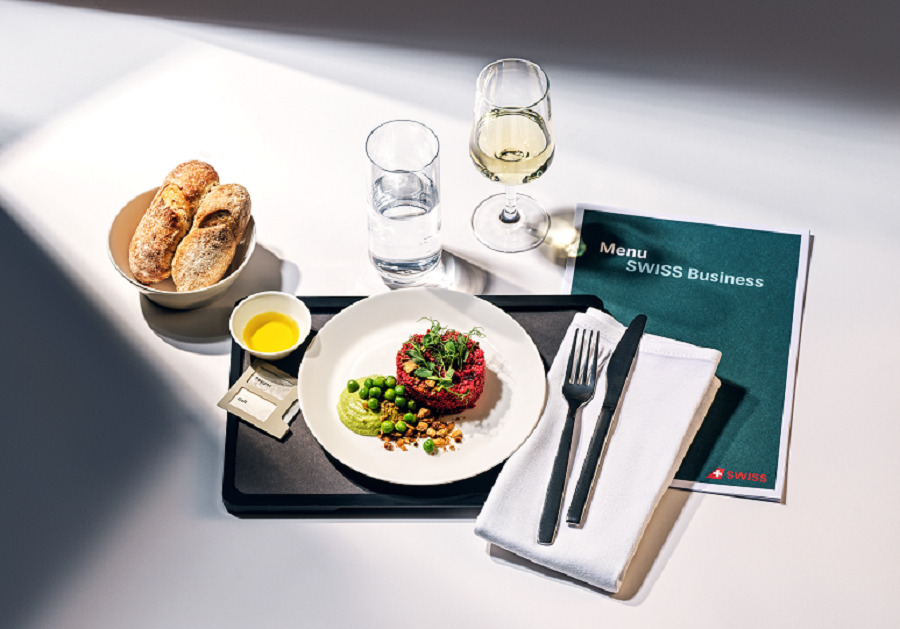 The speciality cheeses on offer to SWISS Business guests include a Passo dello Spluga from the Splügen Alpine Dairy and a Fette Berta by Ueli Moser from the Seeland region. The choice of Swiss wines extends to a Château de Châtagneréaz 2019 Chasselas from Canton Vaud and a Syrah Classique AOC 2019 from the Domaine Jean-René Germanier in Canton Valais.

SWISS now also offers its Business Class travellers a new and more individualized service concept on all long-haul flights. In addition to the traditional ‘restaurant’ service in which the meals are served one course at a time, guests can now take advantage of a new ‘casual dining’ option in which they receive their starter, main course and dessert together and at a time of their choosing. The new service options, which are introduced today, enable the guest to tailor their inflight experience even more closely to their specific wishes and needs.

In a further innovation, the additional service shortly before landing has been replaced by a new ‘SWISS Bistro’ concept. This consists of a new bistro menu inviting guests to choose from a range of hot items (such as a Swiss prime beef burger with coleslaw salad), cold items and snacks according to their individual tastes and hunger at any time after the main service until shortly prior to landing.

All images credited to SWISS