With the rise of longhaul single-aisle aircraft, an old question becomes new again: how can airlines span the increasingly wide “comfort canyon” between business class and economy class?

The original comfort canyon came in the widebody context as increasingly spacious and feature-filled seats with direct aisle access like Cirrus (from Sicma, later Zodiac and now Safran), Super Diamond (B/E Aerospace, then Rockwell Collins, now Collins Aerospace), Solstys (Sogerma, now Stelia) and the rest of the pack increased the comfort gap between business and economy.

When business class was initially introduced in the late 1970s — by Qantas or British Airways, depending on how you define the word “class” — the niche was relatively minimal, fitting in between the recliners and sleeperettes of first class and the still relatively spacious and well-pitched economy class seats.

As the physical size of recliner-sleeper seats and distance between rows grew during the 1980s and into the 1990s, the proverbial comfort gap grew as well. And once the business class flatbed arrived with the first “flappy-fan” British Airways Club World seat in 1999, and the first direct aisle access in business with the Virgin Atlantic Upper Class suite in 2003, with direct aisle becoming the standard over the next ten years and doors arriving with the Qatar Airways Qsuite in 2017, the front side of the canyon started to recede into the distance — and quickly.

Meanwhile, in economy, shrinking pitch saw even full-service airlines dropping below 30”, while the Boeing 777 was transformed from a comfortable aircraft of choice at nine-abreast to an uncomfortable ten-abreast. Thus, the back wall of the canyon also retreated.

A solution for many airlines was a new class of recliners: longhaul premium economy. It seems like it’s the obvious answer in the world of narrowbodies, as more and more longhaul single-aisle aircraft are unveiled with spacious business class seats offering direct aisle access up front but economy seats in a 3-3 configuration down back.

Premium economy is supposedly the most profitable segment of area on the aircraft. So why isn’t it appearing alongside the new layouts?

There’s certainly precedent for recliners on narrowbodies: the longer range Boeing 757s often offered recliners (and later flatbeds) up front, while outside Europe a recliner in domestic business (or in US domestic first) is standard. Indeed, the standardisation runs all the way down from the seating layout — 2-2, for sure, and pitched at around 35-36” these days — to specific products, with the Collins Aerospace MiQ seat widely operated both in the widebody and narrowbody contexts in shorthaul business and longhaul premium.

The opportunities are ripe, but there are complications in a smaller narrowbody cabin that do not necessarily exist in widebodies, or not in the same way.

The class transition problem is a tricky one, since the transition area between business and, say, premium economy usually requires a customised interstitial product. It could be a monument — whether a lavatory, a customised rear to the final business seat — or a simpler divider, but it will require certification testing and may end up reducing space efficiency.

Largely, this means abandoned space forward of the monument where the “overlap” between seats would be. This may be more complicated to manage and mitigate on the smaller fuselage, or it may turn out to be easier, with bins closer to the top of seats, plus inter-class curtains and other dividers regularly seen. 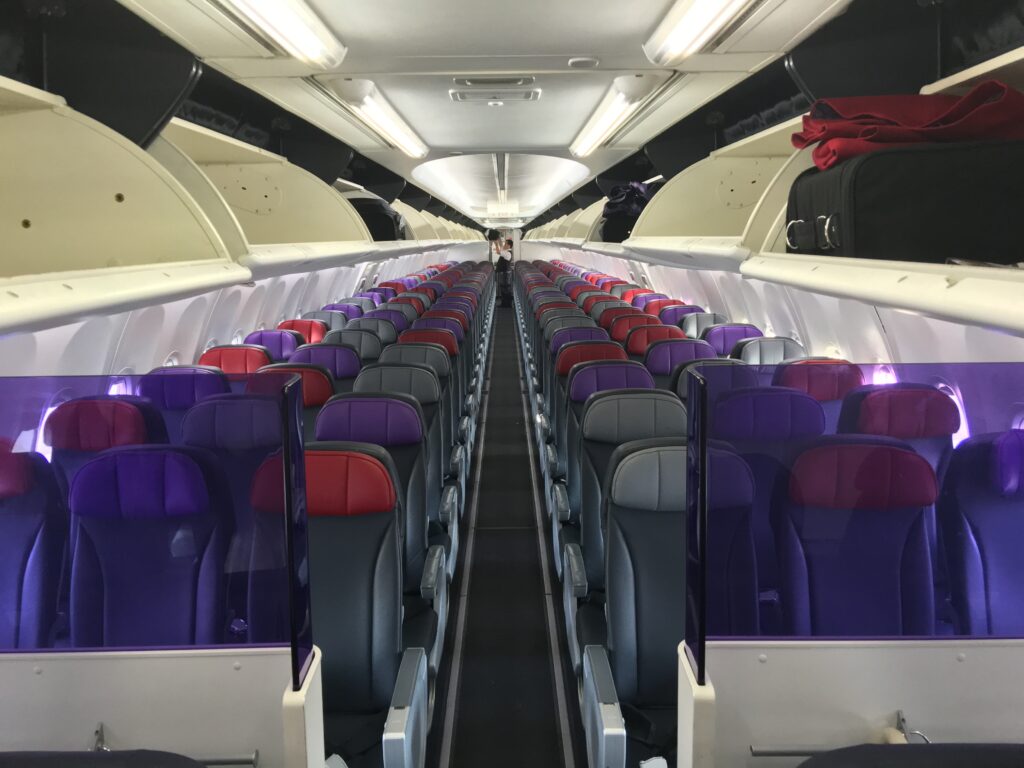 On the plus side for practicality, a growing number of narrowbody operators have abandoned the divider between recliners and economy seats, which may reduce the impact between premium and regular economies.

There’s also a market question: do the lower volume routes that an Airbus A321XLR will serve, for example, support a full three class configuration with business, premium and economy, or even three-and-a-half class if extra-legroom economy is thrown in? On the other hand, can airlines connecting over a hub where premium economy is offered on one leg continue to simply downgrade passengers to regular economy where it is not?

These and other questions will be answered over the next few years, particularly at Airbus as the later A321LR and forthcoming A321XLR cabins turn from LOPA design into hard, thermoplastic reality.