As airlines look expectantly towards the resumption of flights during the next phase of COVID-19 lockdown lifting, the new shape of the airline cabin is taking form, with protective shielding and seat dividers emerging quickly as a measure that seems likely to reassure passengers. But how are these cabin additions being certified?

Lufthansa Technik is in the process of doing the certification work for a new head-level divider, using supplemental type certificates (STCs) from EASA, the European Aviation Safety Agency, which signs off the work.

The divider, a sort of head-level shrouding for the middle seat of three, can fit on the three primary mainline narrowbody seats aboard the Lufthansa Group’s hub airlines (Lufthansa itself, Austrian, Brussels Airlines, and Swiss — no word yet on Eurowings). The three seat types are the Recaro BL3520 which débuted as the Lufthansa Neue Europakabine (NEK) over a decade ago, the Geven Essenza that is replacing it on the Lufthansa Group hub airlines’ Airbus A320 family fleets, and the ZIM Unique on Swiss’ Airbus A220s. A formal equipage decision has not yet been made by the airlines. 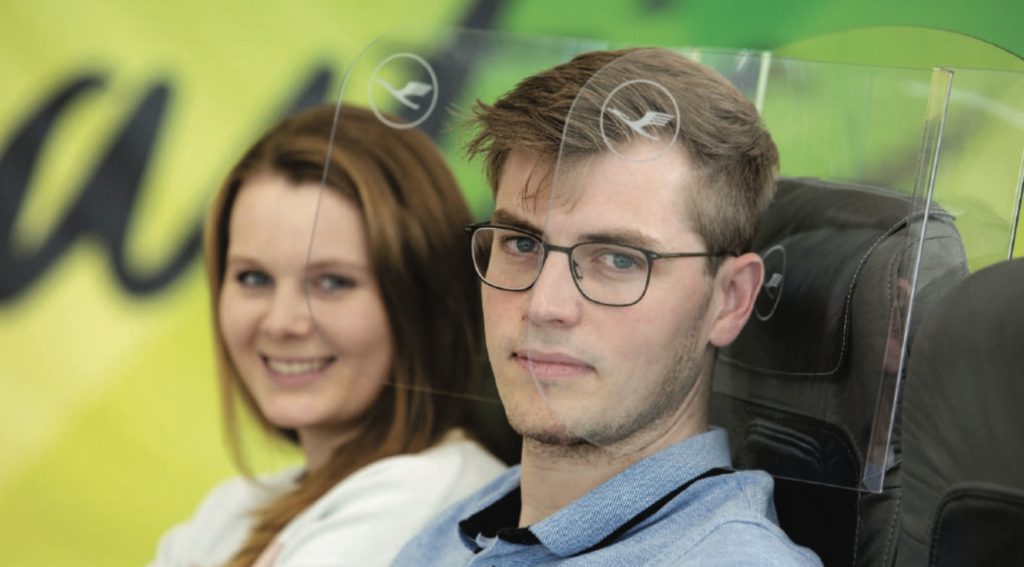 The divider fits onto the middle seat of three. Image: Lufthansa Technik

However, Lufthansa Technik is designing and certifying the head-level divider at pace, having started just a month ago. “The reason why we are doing our own certification STC is because we need to expedite this divider,” head of product cabin modification Georg Stoffelen told Runway Girl Network, after the firm presented at an Independent Aircraft Modifier Alliance (IAMA) virtual think tank webinar.

Stoffelen said. “If we use OEM SBs [original equipment manufacturer service bulletins] and certification it would take, we think, more time to get everybody together.”

How much more time? “Our experience is that it’s six to eight weeks, and then you get an answer. The OEM is interested, and then you have a forward-and-back with all the questions you have to answer. I think we’ve cut off two months of investigation time between us and the OEM,” Stoffelen estimated.

Instead, the dividers are certified via an EASA STC as a “non-significant major change”, since the shrouding is less than eight hundred grams in weight and is thus accounted for in the seats’ basic certification and Technical Standards Orders (TSOs).

“If you touch the TSO, it means HIC [the head injury criterion element of] dynamic testing, it would be necessary to involve the OEM. But because we only have a 600-800 gram heavy divider, we stay under the limit of dynamic testing. This is one of the goals.” 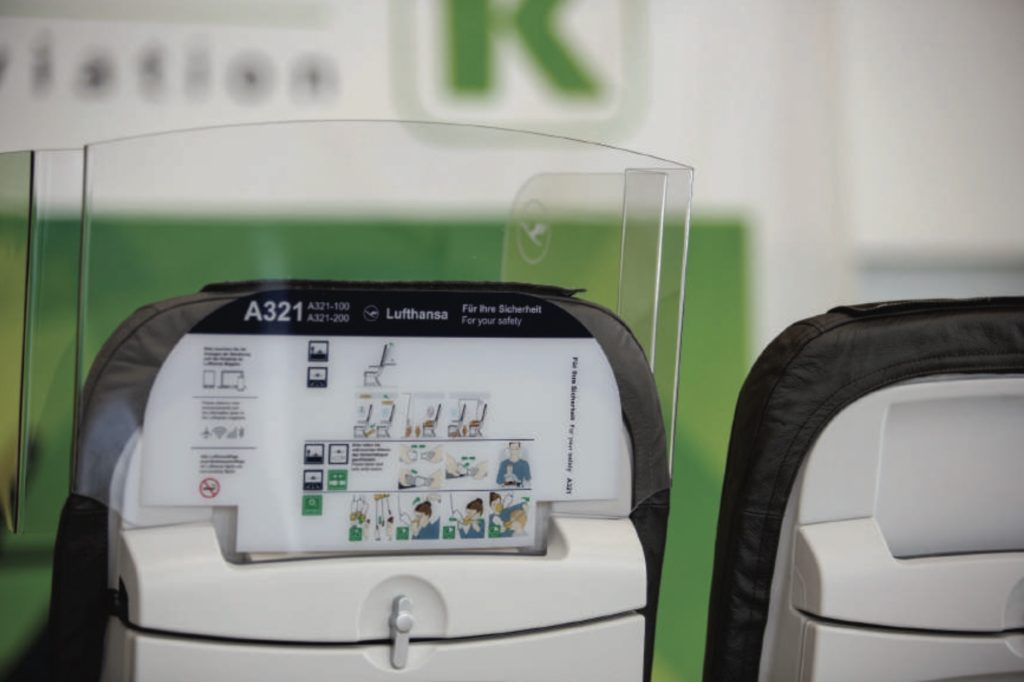 Since the divider fills the literature pocket, the safety card information is printed onto it. Image: Lufthansa Technik

That’s not to say that certification will be a breeze — literally or figuratively, since LHT had finished airflow tests the day before RGN spoke LHT, with thirteen tests remaining at the time.

While declining to provide a full list of testing — on the basis that this expertise is part of the company’s competitiveness — Stoffelen outlines three material qualification tests, four cabin safety certification tests including evacuation modeling, and three structural integrity tests such as abuse loads.

As it happens, one of the biggest challenges is sourcing the polycarbonate material, which — as anyone visiting a European supermarket, pharmacy or other essential business that has created physical barriers will spot — is in high demand.

“This is the biggest bottleneck,” said Lufthansa Technik’s Torben Biehl. “The entire world at the moment is requesting transparent plastics in every industry, so it’s quite challenging to get the material now.” 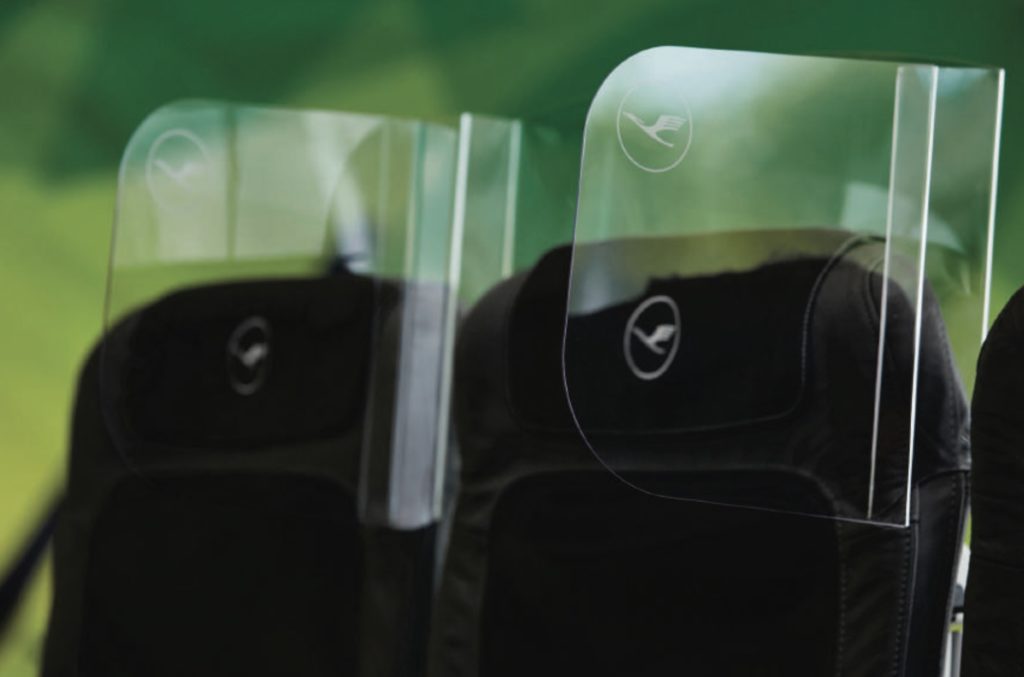 The polycarbonate can, if necessary, be branded. Image: Lufthansa Technik

The solution has been working in partnership with Krüger Aviation, a small Hamburg-based supplier, and twenty-one tonnes of polycarbonate have now been secured: enough for the “hub airlines” of the Lufthansa Group.

LHT is working with Krüger Aviation to manufacture the dividers. Image: Lufthansa Technik

Noted Stoffelen, “we’re still working with the airlines to check their wishes and their economic requirements that they have right now for the seat divider.”

That set of requirements will be crucial: are these items needed and wanted by passengers? How effective are they, even if as placebo or as a reminder for travelers not to let their guard down? We’re still waiting for the results of those tests.