No airline wants to start retrofits immediately after a new aircraft and new seat goes into service, but Virgin Atlantic is having to do so to fix the problems with the newly designed fold-down tables on its Cirrus NG business class seats aboard its Airbus A350-1000.

There’s much to like in the new cabin, and a full review will be published soon. But this is a Safran Seats product, and it’s a seat where Safran predecessor Zodiac Aerospace has had problems in production and quality, most notably with Cathay Pacific.

Virgin Atlantic’s executive vice president for operations Phil Maher sat down with Runway Girl Network on the aircraft during a media flight (on which RGN was a guest of the airline) to delve into the details.

The airline has done an impressive job in fixing many of the commonly found issues with the seats. “There’s a couple of issues around the trim and finish that we’re working on with Safran, but they can be overcome very quickly,” Maher says. These include shrouding not aligning, for example.

But the real problem with the seat is the tray table. Previous Cirrus tables, including from Cathay Pacific and Finnair, swing out from the triangular side table space and unfold.

Virgin’s current table, by contrast, folds down in its entirety from the seatback in front. It then travels in a horizontal arc to situate itself in front of the passenger.

Fundamentally, it is too large, does not permit easy egress in the down position, and any passenger larger than perhaps a 34-36” waist (or who is, say, pregnant) will find the table uncomfortable. 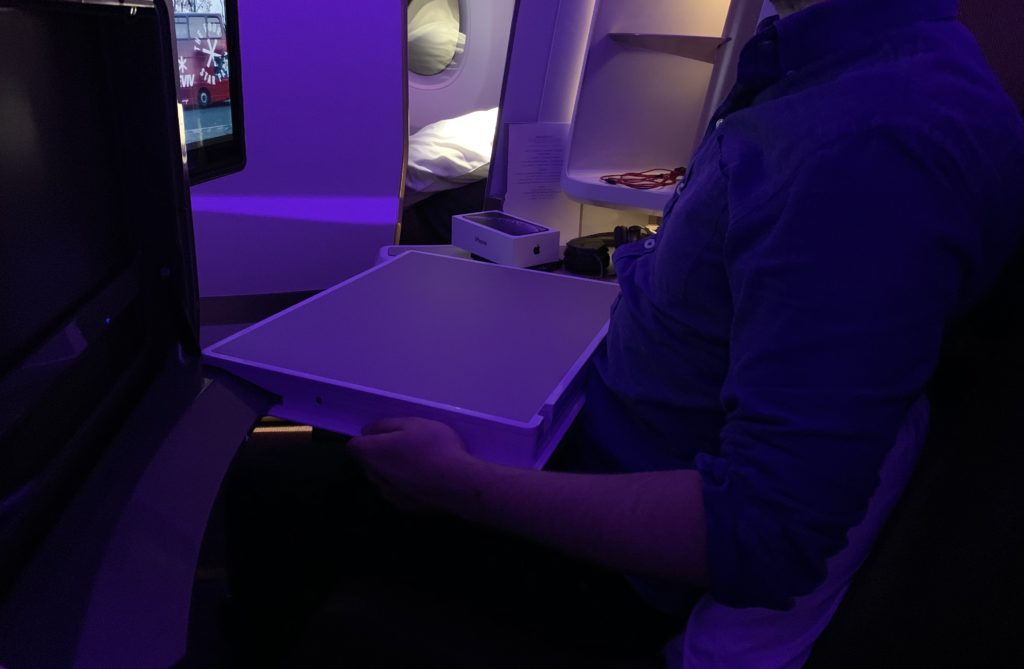 The table is a tight fit even for passengers without extra padding. Image: John Walton

Your journalist, who is in fairness of rather more ample a frame than average, certainly found it problematic, although the effect was worse behind row 1.

In the meantime, the crew are thoughtfully serving the meal on the triangular side table, helped by tapered plates and multi-course meal design.

The problem, says Maher, is that “we did a huge amount of test analysis, and we used the 95th percentile passenger, and it all works from a design perspective. You go into service and in reality there are some constraints in there that really doesn’t meet passenger expectations.”

Again using CDC statistics, the 95th percentile adult male waist circumference is 128.1cm or 50.4 inches. A passenger of this size would not be able to use the table comfortably, if at all. 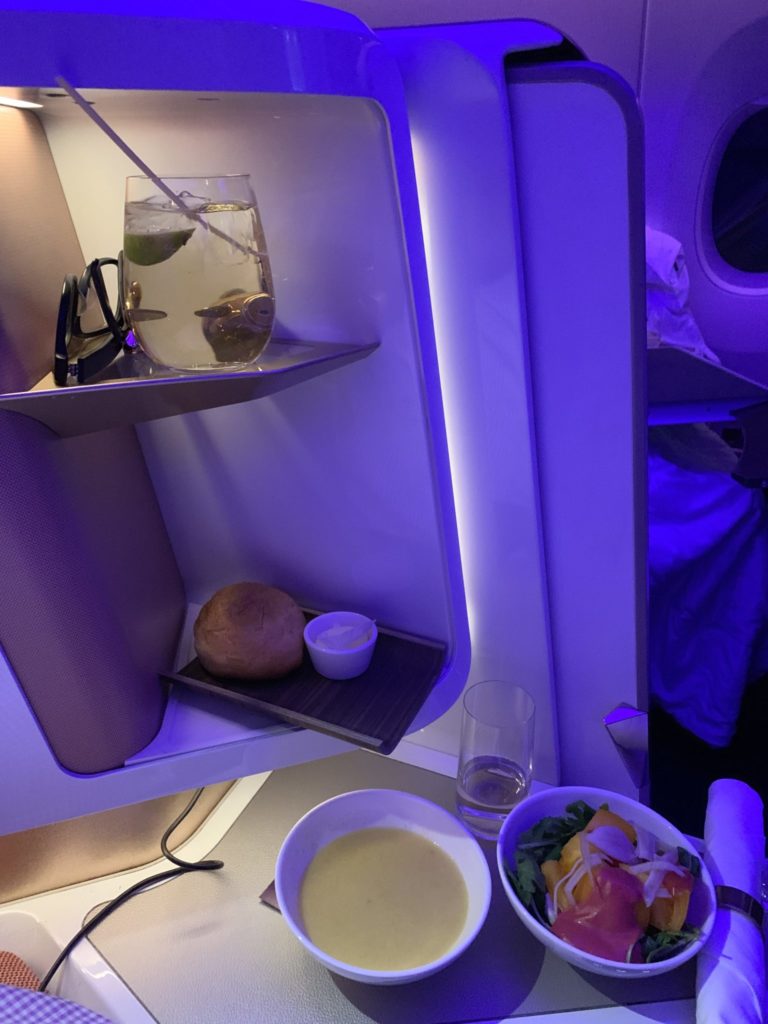 The crew offers the option of serving the dinner courses on the side table for passengers for whom the tray table is too snug a fit. Image: John Walton

It is surprising that this failure of functionality managed to slip into actual service. But all credit to Virgin, it is fixing this problem, and fast. “We designed a new tray table,” Maher explains. “The early customer feedback we had some months ago, we weren’t giving the flexibility in the tray table that customers needed. We’re going to move that. We’ve already designed a new table that’s coming into service in October. We’re already ahead of the curve.”

“We’ve gone in with a design team, our design team and an external agency, redesigned the new tray table,” Maher says. “Not only does it provide a single surface for the tray to come out and move backwards and forwards, giving you flexibility, it also gives you a second tray table to one side so you can put your iPad, your phones and stuff on the side.” 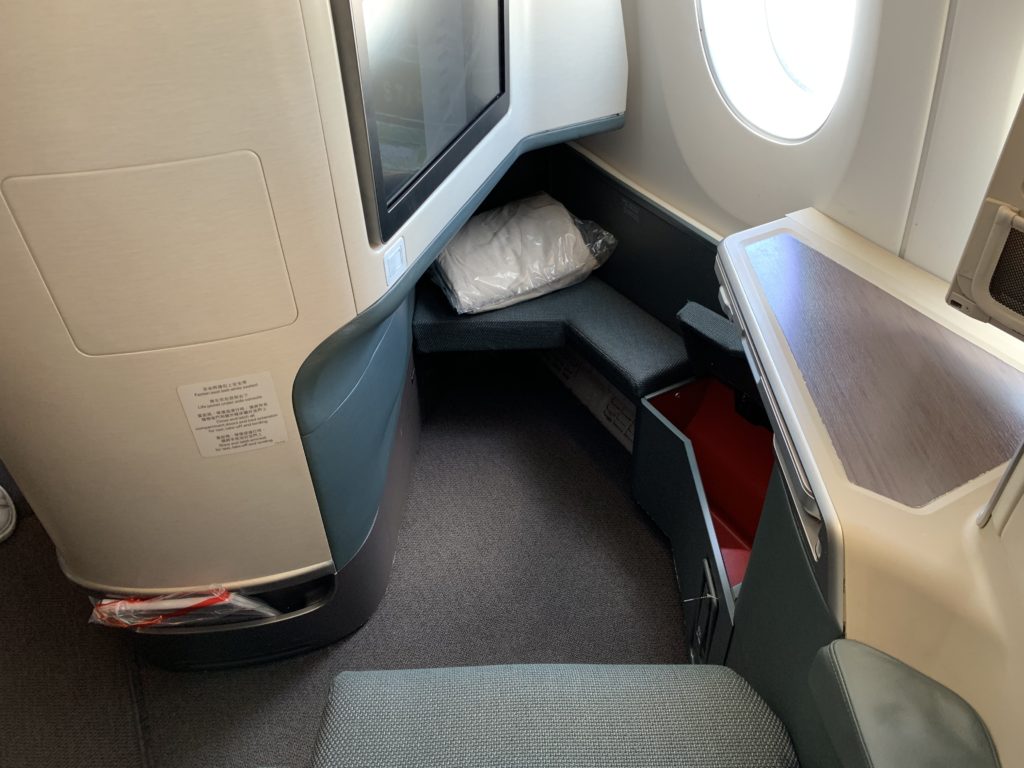 Cathay’s A350 Cirrus table swings out. Note the airbag at head impact level on the seatback. Image: John Walton 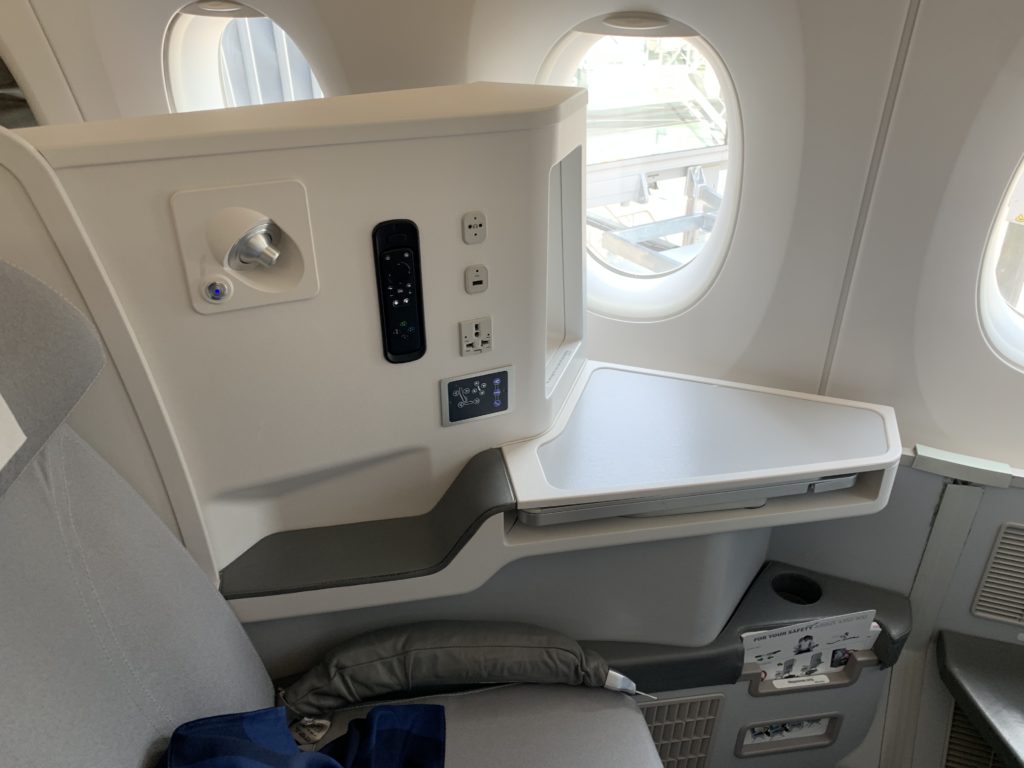 Finnair’s A350 Cirrus table, too, swings out. Image: John Walton

In terms of functionality, says Maher in reference to the redesigned tray table, it “comes down, slides across and comes out. As it slides out, it opens another surface, so you end up with a massive double surface.”

It is, Maher notes, “in production already. We’re using a company in Italy to rapidly develop the production scheme, and we’re expecting it to be in service in October. I’m really pleased the team have been able to do a design sprint, get a new solution in place.”

While the prospect of retrofits immediately after entry into service may be shocking, Virgin Atlantic’s swift response may well mean that the issue is, like the tray table itself, folded neatly away. 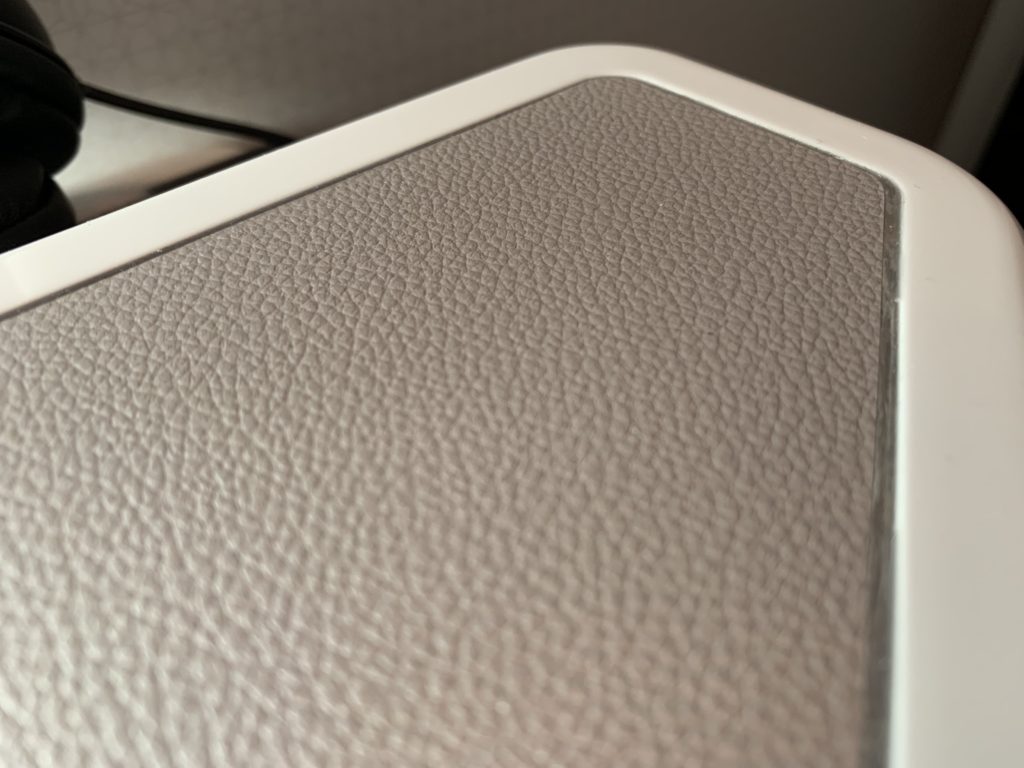 One example of trim and finish issues Virgin has been solving is the Safran side-table laminate problem. Image: John Walton

Virgin Atlantic provided flights and accommodation on its media trip launching this product.

The heat is on with aircraft ESAs. Carlisle has a cool answer