A few months ago, multiple media outlets reported that Thai Airways was disallowing passengers with a girth wider than 56 inches from flying in the Zodiac Aerospace-made Cirrus business class seats on its Boeing 787-9 aircraft due to safety concerns.

As it turns out, the seatbelt extenders distributed to larger passengers on board aircraft disengage the seatbelt airbag system. These systems are in place on a multitude of airlines and aircraft types to ensure a variety of seats – spanning business class, premium economy and bulkhead economy – pass strict head injury criterion (HIC) testing during certification.

Runway Girl Network reached out to multiple industry stakeholders, including Thai’s business class seat manufacturer, to find out if we should expect to see more passengers barred from seats with seatbelt airbags.

De-activation of the airbag system to accommodate the larger individual does not prohibit that individual from occupying that seat. De-activation of the seatbelt is acceptable as there is no requirement to address HIC for situations where the extender is used to disable the airbag system for passengers outside of the certifiable range of occupants.

In short, with the occasional exception such as Thai, passengers of size who need seatbelt extenders are still able to fly in seats that use airbag systems, as industry is generally looking the other way on this issue.

But does this not mean, then, that those who use extenders for seatbelts with airbag systems are less safe than their slimmer counterparts in the event of an emergency, such as a survivable crash?

A spokesman for the FAA explains:

The FAA requires that inflatable lapbelts will deploy and provide protection under crash conditions for a range of stature from a two-year-old child to a 95th percentile male.

Occupants requiring a lapbelt extender are well above the 95th percentile. In that instance, de-activation of the airbag in the seatbelt is safer than leaving the airbag active in combination with a seat belt extender.

Using a broad range of occupants has proven to be very effective in establishing safety standards. However, because it is a range, and not the entire population, there will be individuals that are outside the range.

This “outside the range” logic is akin to the reasoning employed by the FAA for children under the age of two, who are not required to be in a child restraint in their own seat, despite the dangers associated with being held in an adult’s lap during flight. Since 1979, the NTSB has advised the FAA to require that babies be in an appropriately secured child restraint in their own seat, but the agency has not adopted this recommendation.

It’s also important to note that seat certification is still achieved using crash test dummies that were configured based on population size data from the 1970s; they are not sized to adequately represent the passenger mix on today’s aircraft. At 223 pounds, the 95th percentile male ATD dummy is a fairly normal weight for today’s broader, taller, heavier humans. Moreover, larger individuals are not the only passengers who may need extender belts; passengers with permanent or temporary disabilities sometimes use extenders to accommodate their own needs (stoma bags, broken limbs, etc). 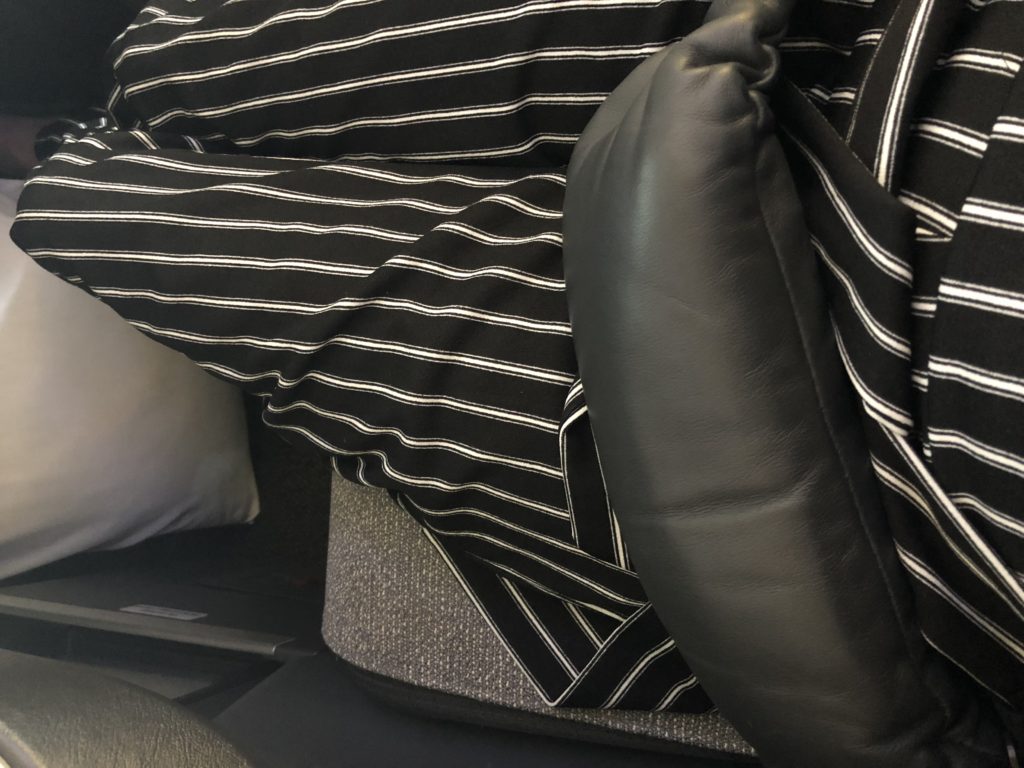 And what of the passengers who accept that their airbags won’t work in business class or premium economy, or are compelled to buy two economy class seats due to their size? Their bodies are going to go somewhere in an impact, and it feels negligent that the industry doesn’t know where.

Zodiac rightly points out that its popular Cirrus lie-flat business class seat is by no means the only seat featuring seatbelt airbags. “You mentioned Cirrus. As you know, there are many business or premium economy class seats using airbags to ensure compliance with certification rules, i.e. safety of passengers. This is not specific to one particular seat,” stresses a spokesman for the firm.

“As of today, as airbags in seats generate more complexity in manufacturing and maintenance, we see more solutions like 3-point seatbelts developing (like in your car or in business aviation).”

RGN has reached out to other major seatmakers to understand how they are innovating to accommodate passengers of size.

But it seems clear that industry and its regulators have a choice – do the research and test the seating that already exists to ensure it is survivable for everyone in the cabin, and mandate changes for future developments; or openly admit the de facto standard that seats are not tested for survivability for a growing percentage of passengers.

In Conversation: Bernie Baldwin at the Farnborough Air Show