After several years on the interiors trade show circuit, Safran has secured a launch customer for its ultra-wide Fusio business class mini-suite in the form of Japan’s All Nippon Airways. ANA will take six shipsets linefit and six shipsets retrofit for its Boeing 777-300ER fleet, and will also install the seat linefit on its upcoming Boeing 777X aircraft, which are delayed owing to problems with the GE9X engine.

Runway Girl Network discussed the new seat with Christophe Accolas, executive vice president for sales at Safran Seats, who emphasized that the seatmaker was speaking about Fusio as a product rather than for its customer.

The seat for ANA, which the carrier is branding as “The Room”, is a “highly customized version of our Fusio seat model, which is the result of a partnership cooperation between ANA, ourselves, the IFE provider Panasonic, and a third design company, Acumen,” Accolas tells RGN.

In form, Fusio is a significantly more spacious evolution of the “Yin-Yang” concept first created by Safran predecessors Contour/Britax Rumbold as the ‘Mohawk’ Club World seat for British Airways, which launched 20 years ago. That seat — the one with the movable fan divider last seen on the OpenSkies operation before it was folded into LEVEL — was the first fully flat business class bed.

The seat is also doored to create a mini-suite, and in a particularly interesting way given the complexities of certifying doored mini-suites like Fusio at a time when regulators still do not currently have agreed, formalized standards for this kind of seat.

Accolas tells RGN that the privacy from the doors has two key parts: firstly, a sliding door extends towards the passenger from the seat monument part that contains the IFE monitor. Secondly, what Accolas refers to as a “pop-up door, which is coming from the lateral armrest and is moving up only”, extends vertically. 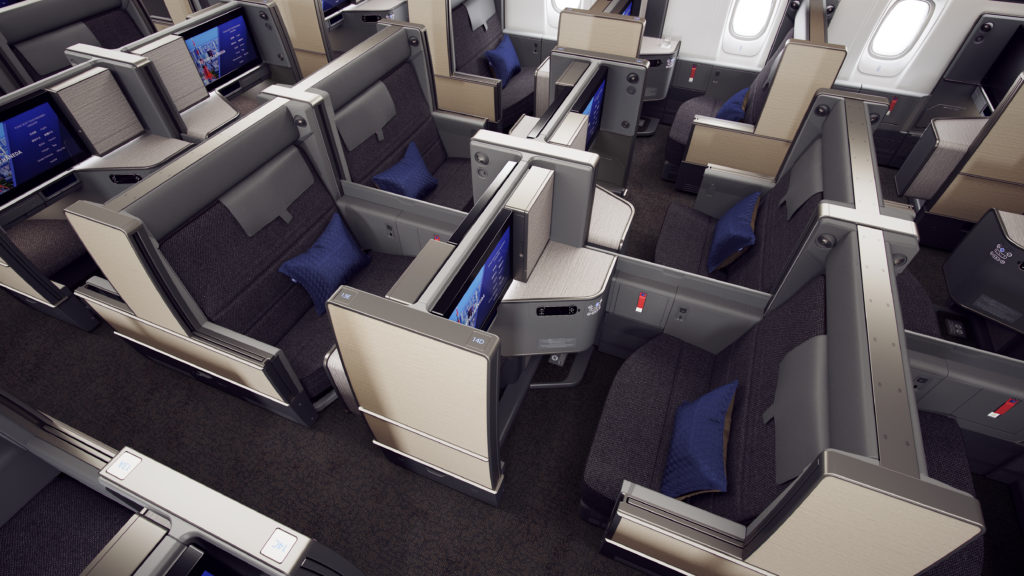 Part of the suite doors rises upwards from the aisle-side armrest. Image: ANA

The key difference between Fusio and less dense business class seats is that there is no overlap at the passenger’s seated shoulder level, or roughly half of the seat. “The bed surface that you are achieving with this specific yin and yang configuration, is forty percent above what you are achieving with a classic business class herringbone or staggered seat model,” suggests Accolas, with maximum width reaching 35”. 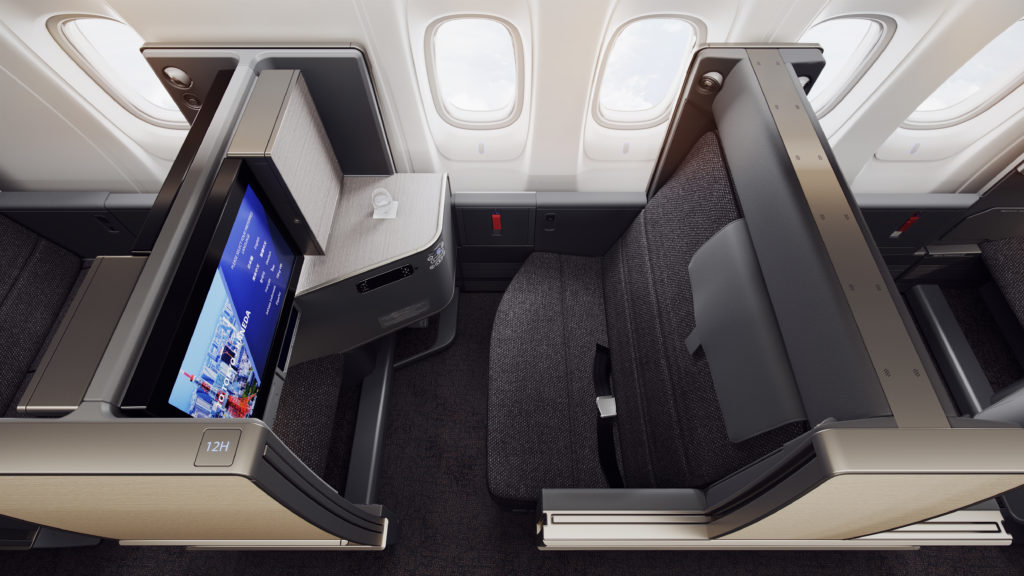 As a result, “the density is not as good as the Cirrus or Skylounge seat model, but as you could have seen in the pictures, the passenger experience and the attributes of the seat are closer to first class, even a mini-suite first class, than really a traditional herringbone or staggered business class seat,” Accolas says.

Accolas says that in the bed conversion process, the seat pan moves forwards and the backrest reclines, “in a similar manner to what we have in our Skylounge or Cirrus seat models,” rather than the backrest flipping over to provide the sleeping surface.

Given the design, seat pitch calculations are somewhat complex, with Safran quoting 107 inches for the nested pairs of seats, which divides into two to create a comparable seat pitch of 53.5”.

“The 107 is the typical and basic seat pitch for the Fusio, and this is what ANA has taken and confirmed,” Accolas explains, highlighting that Fusio is variable in pitch for airlines that want to order more or less bed length. “There is not really a minimum or maximum. You can imagine to adapt it to every customization that an airline like. Of course, if you reduce the seat pitch you will reduce the bed length available for the passenger.”

With this level of width, though, comes a business-class problem last seen on the infamous Koito seats Singapore Airlines installed a couple of generations ago: the seats are too wide, and passengers couldn’t get comfortable, leading SQ to create a rectangular bolster cushion to allow passengers some support.

Safran has options here, says Accolas, as “part of the standard optional features we propose for the seat”. However, on the ANA version, “we had many discussions on this potential feature, which have been finally decided by the customer not to be installed. We could imagine to add it, but at the end of the design choice by ANA they decided not to have it for this Fusio.”

Despite multiple requests, Safran was not able to explain how the seat satisfies the EPF (emergency passage feature) requirement in certification regulations, with Accolas saying, “I know that our certification team worked a lot on this, especially with the Boeing people. I know that it is passing all the regulations. I do not have the details on how we have been able to achieve it, sorry.”

One might hypothesize that either this ‘double-door’ factor or the fact that the armrest-side element extends upwards (and would thus arguably be unlikely to deploy upwards in a crash situation) could satisfy the EPF requirement.

Still on certification, Accolas confirms that the HIC challenges have been addressed via an over-shoulder belt. 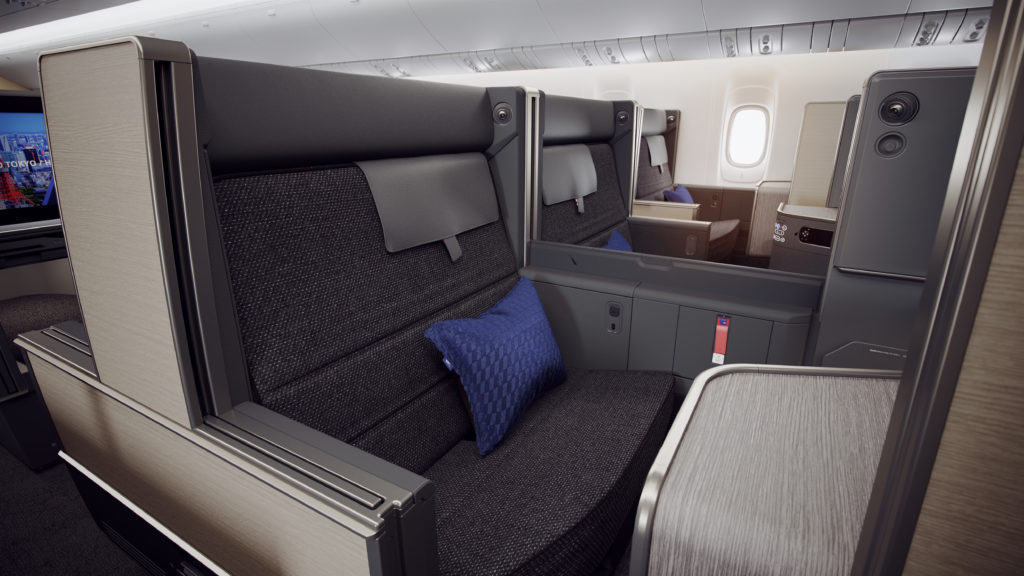 HIC certification is via an over-shoulder belt. Image: ANA

But crucially, it will need to be seen whether Safran has managed to design — and will manage to manufacture — adequate stability and noise-dampening into the structure between the two seatbacks. The company did not do so successfully with its last yin-yang design evolution, the ill-fated American Airlines “Concept D” seat.

ANA does not have exclusivity on Fusio, Accolas confirms, although some of the specific design features developed in the partnership ANA put together are unique to the airline’s implementation. 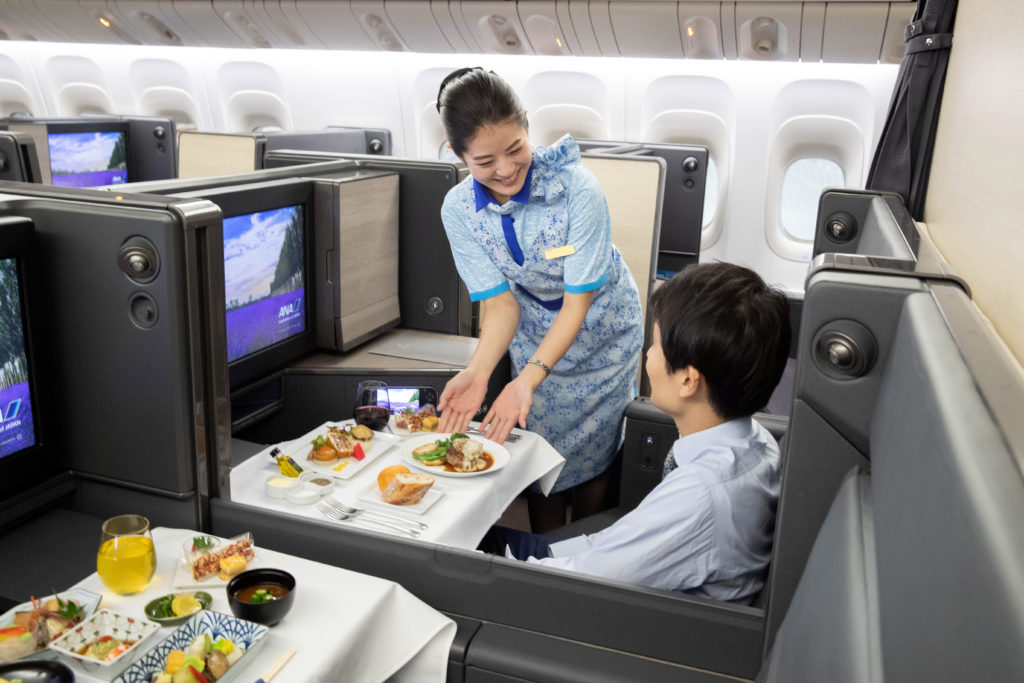 The tray table slides out from underneath the monitor in front. Image: ANA

Press Release: Iberia reduces the use of plastic on its flights