On my way to the 2019 IATA Annual General Meeting in Seoul, I had a choice to make. Flying Korean Air, I could opt to take the once cutting-edge Airbus A380 out of New York JFK, or I could go slightly out of my way to Boston to fly on the airline’s newest type, the Boeing 787-9. The Boston route was not even a month into its launch, but it was the obvious choice for this #PaxEx nerd.

After a quick hop up to Boston on the American “shuttle” and a terminal change, I checked in and headed to the Air France lounge. The lounge is located near the boarding gate Korean used, but is mostly a windowless space that I wouldn’t want to spend a ton of time in. There are some decent food and beverage options, but I wanted to save my appetite for dining on board.

On board the big blue 787-9, I turned left into the Prestige cabin, featuring just three rows of the airline’s newest Prestige Suite product. Row one contained Korean’s now discontinued First Class cabin, which was the same Prestige Suite with some extremely minor modifications. The intimate cabin sports an interesting take on the recent premium cabin suite craze, with seats in each row being slightly offset, providing a small passageway for passengers in window seats to access the aisle without stepping over anyone. The passageway also provided a shelf for storage of the random assortment of items people fly with these days. Each seat felt like it provided a great amount of privacy without having to add a “door” to get it done. 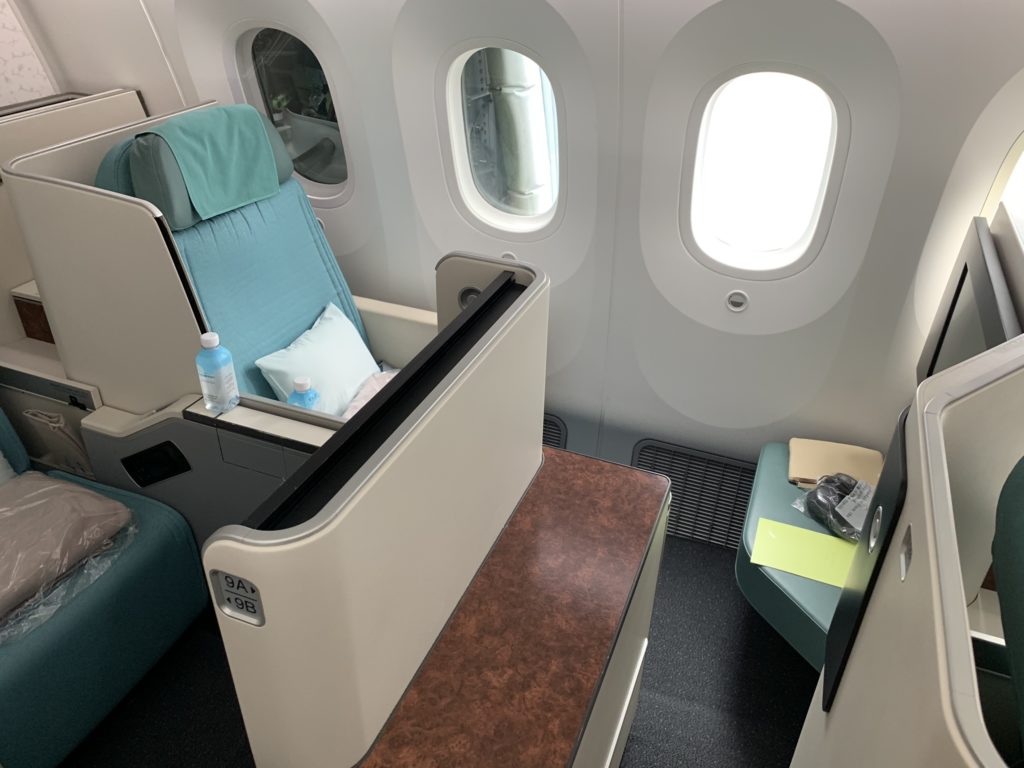 After a quick pre-flight beverage, the 787 departed a wonderful uncongested Boston Logan for the 14-hour flight to Incheon. Just after takeoff it was time for lunch. First up was a roasted bell pepper roll with cream cheese, a seared prawn and scallop salad as an appetizer, and my choice of the Korean Bibimbap for the main course. 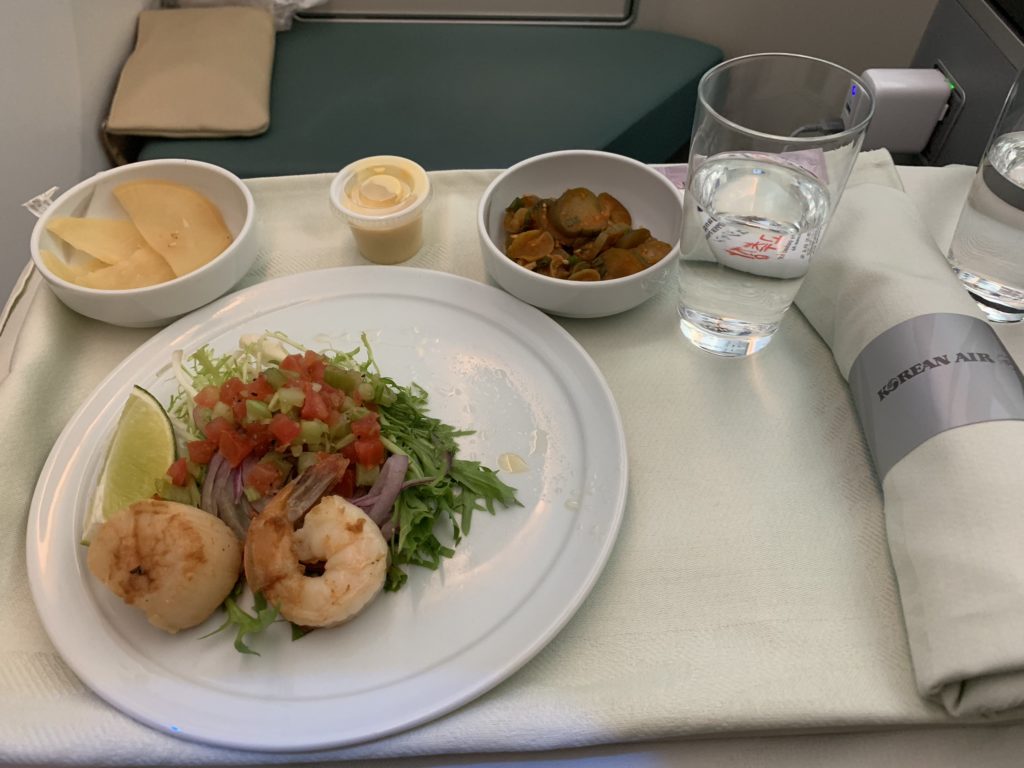 Service of the courses was efficient but somewhat rushed, an odd feeling for such a long flight. Menus were collected after ordering, so I had to rely on a photo I took of the menu for the rest of the flight if I wanted to see the drink selection. 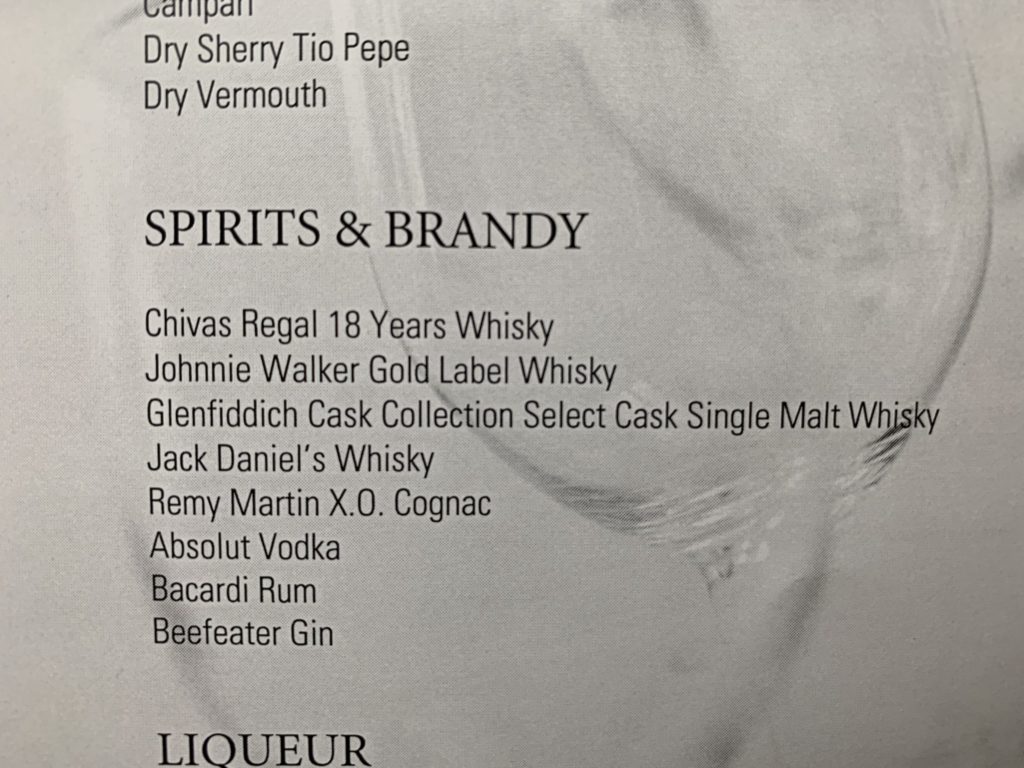 While the Bibimap was tasty enough with enough of the hot pepper sauce sprinkled on it, I found the minced beef portion to be insufficient for a main course. This simply wasn’t going to cut it until dinner, even after the delicious and huge bread pudding dessert. 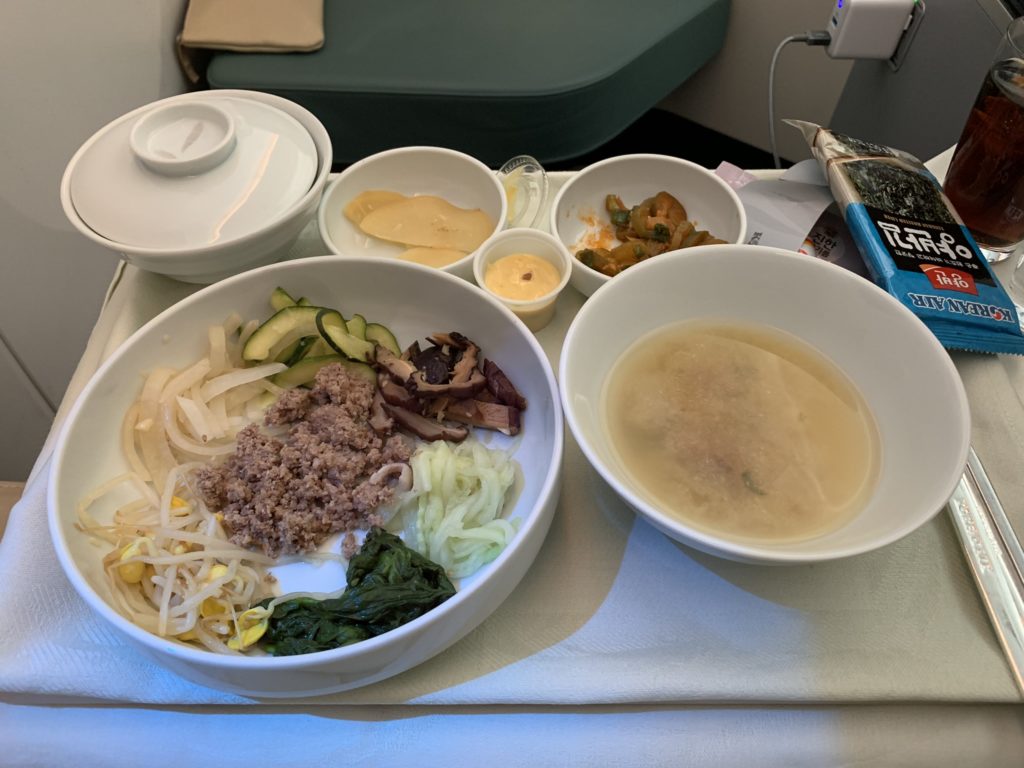 At some point between the two meals I asked for a ramen noodle snack, which was prepared wonderfully and hit the spot. The shrimp dumpling noodle soup dinner was good, but with just two dumplings was once again on the small side. 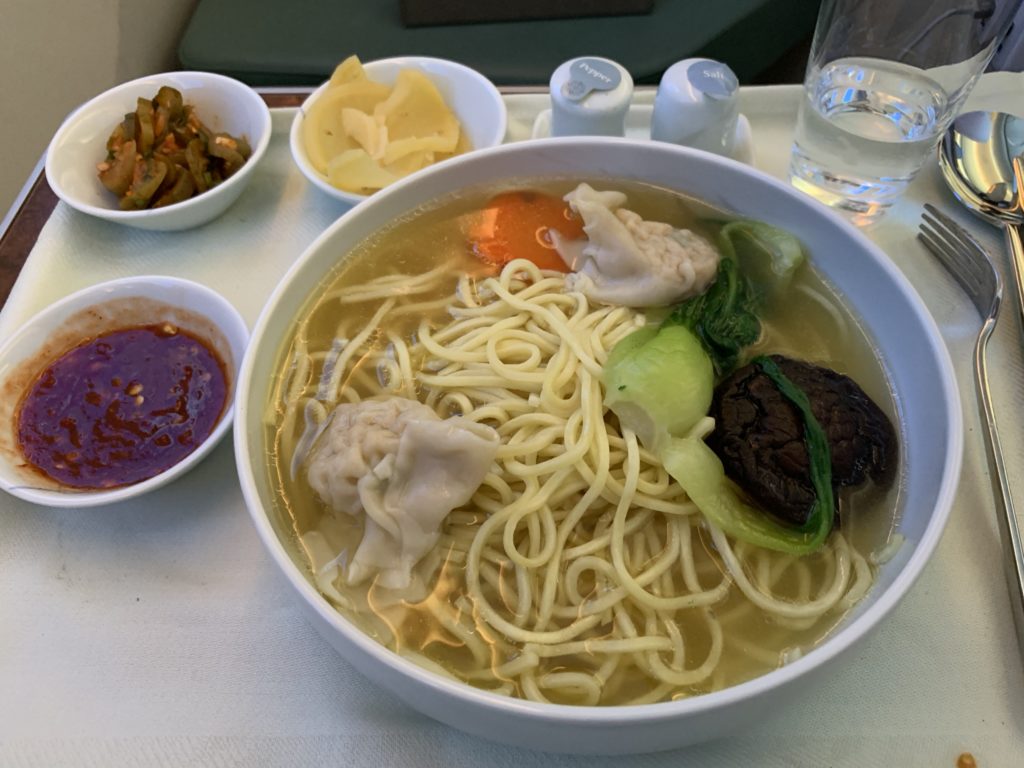 Without Wi-Fi installed on any of the operating Korean Air fleet (the enabled 737 MAX is grounded), all waking eyes would be glued to the Thales entertainment screens. While the system was responsive enough when controlled through the tethered handset (I only made it reboot once), the content selection was woefully insufficient. 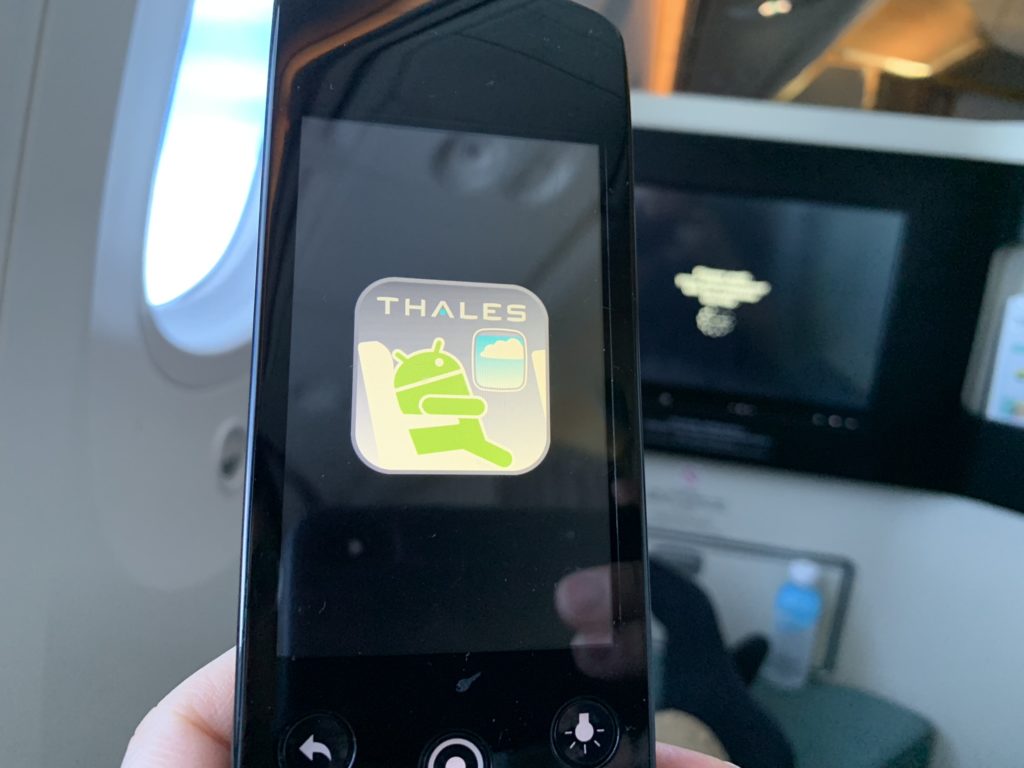 I’ve seen tons more content loaded on Delta regional jets, and this 787 operates routes that span the globe. Once again I had to bust out the trusty iPad, which I loaded with offline content in anticipation of this issue. The USB port at my seat was inoperative, so I had to rely on the AC power outlet to keep things charged up.

I managed to get a few hours of sleep, aided in part by just how utterly private the seat feels. I had plenty of room to stretch out and the footwell wasn’t too compact like on some other similar seat configurations. The biggest annoyance on board was simply how warm it was. Korean did not configure its 787s with personal air vents, so passengers are at the mercy of whatever temperature the crew sets. Naturally, that was much higher than I preferred for sleeping. Being on the sunny side of the aircraft certainly didn’t help, as much as the electrochromic window shades tried to keep out the heat it just wasn’t enough. All the enhanced pressure and humidity of the 787 means nothing to me if I’m roasting in my seat.

The highlight of this flight was most certainly the Prestige Suite hard product. Nothing about the catering, entertainment, or service really stood out as particularly memorable. If you can put up with the heat, though, you’re bound to get a good night’s sleep, and that’s what matters most to me on a longhaul flight. 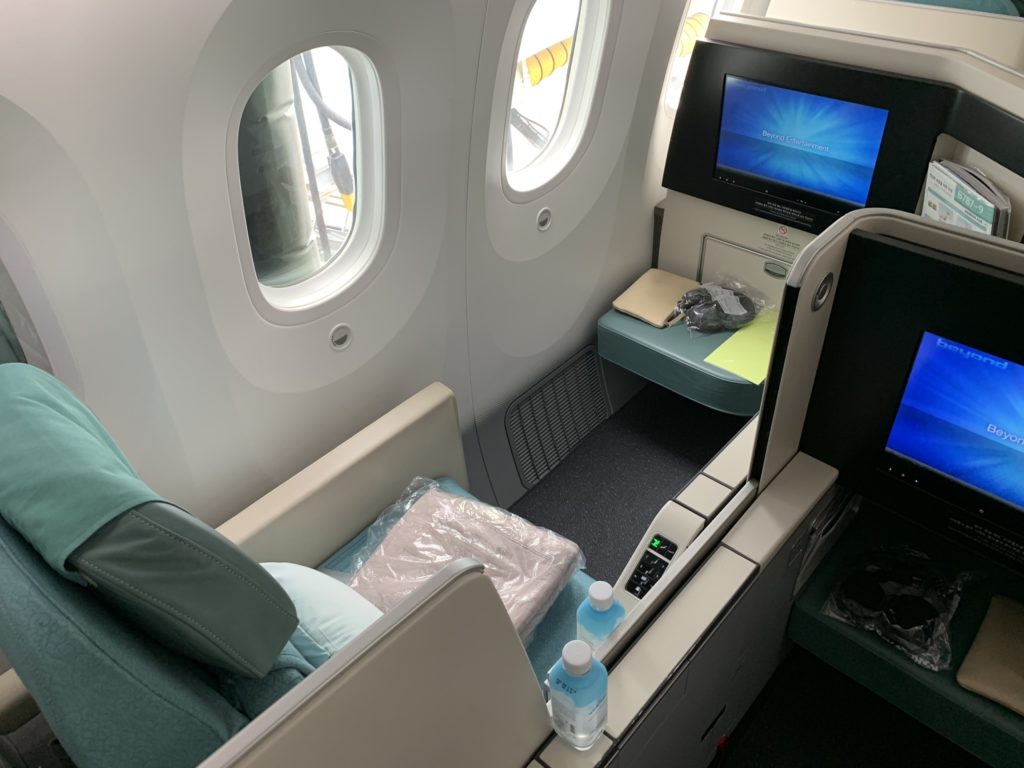 Note: This flight was provided by IATA and Korean Airlines, but all opinions and statements are that of the author. All images are credited to the author, Jason Rabinowitz

#PaxEx Podcast: Deciphering the messaging from Airbus and Boeing in Paris