If there’s a perfect storm of passenger experience trends at the moment, it’s Virgin Atlantic’s afternoon tea. Now offered in all three of the airline’s cabins — Upper Class business, premium economy and the economy class that was at one point going to be called “riff-raff” — it sits neatly in the centre of a Venn diagram of several key trends.

First off, afternoon tea is a retro throwback to a time gone by, when settling down for a mid-afternoon sandwich and cake was a thing, when people took the time to sit and chat together. On the ground, our busy modern lives mean that it is largely now a luxury leisure option to put a bit of swank into a city trip.

In the retro airline context your author discussed in a eulogy to the transatlantic airline afternoon teas of his misspent youth, afternoon tea was partly served because on-demand widescreen inflight entertainment was not yet a thing, and it was always a pleasant way to break up a seven-hour flight while watching movies on the big screen or looped on tiny four-inch monitors. Retro is in vogue right now, with British Airways rolling out multiple retrojets, as a new generation rediscover a fascination with aviation history.

Afternoon tea is trickling back through the cabins… hopefully not literally. Image: Virgin Atlantic

Indeed, having afternoon tea on an aircraft still seems half oddly antiquated ritual, half right-in-the-zeitgeist self-care mindfulness moment. On the latter point, Netflix’s Queer Eye, a show at the heart of pop culture, served up an afternoon tea in its series. Airlines and suppliers are moving towards mindfulness, wellness and relaxation on board, and taking a moment for a ritualized pause is right up that alley.

Afternoon tea is an example of trickle-down passenger experience, too. Virgin Atlantic’s afternoon tea service concept in Upper Class has evolved over the last few years, and it’s notable that “Cake Boy” Eric Lanlard has “designed a bespoke series of afternoon teas” for passengers throughout the aircraft: it’s a little bit of consistently branded luxury for everyone.

And that little bit of luxury is very Virgin Atlantic. Truly, apart from the Upper Class bar and its flip-over seats, there’s very little that differentiates the airline’s hard product — it’s the splash of glam that makes the Virgin brand. Let’s not go overboard, of course: in economy the tea is made up of a scone, a sealed pot of clotted cream and a sandwich roll. But it’s still very cute, with middle class fave Bonne Maman jam and iconic Rodda’s Cornish clotted cream, itself retro in branding.

But Virgin didn’t have to go the extra mile to present the economy service in a signature red box with line-drawn hot air balloons reminiscent of the designs on its delightful Upper Class mugs, or print hashtags on the placemat for the premium economy version.

That little box and indeed the whole service is very Instagram-me-please, and seems that kind of social-media focussed passenger experience is trickling down from premium cabins faster than perhaps one might have imagined. Let’s thank mobile, social, vocal passengers for their work.

Afternoon tea is deeply cultural, too, and if its place in the national psyche of the UK isn’t clear, there are entire county rivalries fought over the correct way and order to apply the jam and cream onto the scone.

Of course a kaffeklatsch isn’t only a British thing: Finnair’s kahvikutsut service is equally delightful, equally cultural and equally welcoming. If passengers from Shanghai or Rio de Janeiro haven’t experienced afternoon tea before, they’ve probably watched it on TV, and if not then it’s a lovely opportunity for a heart-to-heart moment with fellow passengers or even the crew, explaining how it’s done.

Altogether, it’s the perfect example about how a little bit of thought about a sandwich and a sweet treat can make much more #PaxEx than the sum of their parts — no matter which way up you spread your scone. 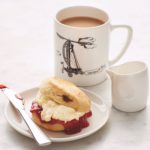 The designs inside the economy box are reminiscent of Upper Class. Image: Virgin Atlantic 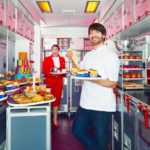