Fully flat business class beds with direct aisle access on narrowbody aircraft will become increasingly important in the next cycle of airline procurement, and the aircraft interiors industry is working hard to meet the demand. Passenger expectations of business class products will continue to rise, and the scale of medium- to longhaul narrowbody flying will increase substantially as the Airbus A320neo family (particularly the A321neo and A321LR) and Boeing 737 MAX family (especially the 737 MAX 9 and MAX 10) begin to ramp up deliveries.

Existing longhaul narrowbody business class seats already aren’t up to the widebody standard, which is particularly noticeable when they’re competing with better seating on certain routes. Even besides the lack of direct aisle access, the Rockwell Collins Diamond seat (as seen on many a Boeing 757) has particularly constrained foot space, and the original style Thompson Vantage seat (as seen on BA’s midhaul A321s, and in a slightly more spacious model on JetBlue) has a choice between the “throne” and no direct aisle access. A variety of other seats in scattered service are pushing twenty years old, like the BA 2000-era Club World Mohawk or Virgin Atlantic’s 1999 J2000 seat, while American Airlines’ A321 transcon first class Zodiac Cirrus hasn’t been replicated by other carriers.

Enter the Thompson Vantage Solo, looking like a photocopy of the Contour clone of the Virgin Atlantic 2003-era Upper Class inward-facing herringbone seat — if, not to put too fine a stylistic point on it, the photocopier were set on Boring Corporate.

Thompson suggests that the seat can be installed at an effective 33” pitch, which isn’t as dense as any of the other products once you do the multiplication and division for pairs and staggered seats, but isn’t a million miles away. It certainly sounds like the seat that Malaysia Airlines CEO Peter Bellew revealed to RGN at the Paris Air Show this year.

From the renders, the herringbone is effective, with the monitor placed over the foot space, which should both increase shoulder room and add a large storage space option for passengers. The design has evolved slightly in the few years since Thompson’s former management, then significantly more receptive to industry media than presently, demonstrated the first concept mockup to me in the back room of its Aircraft Interiors Expo stand. 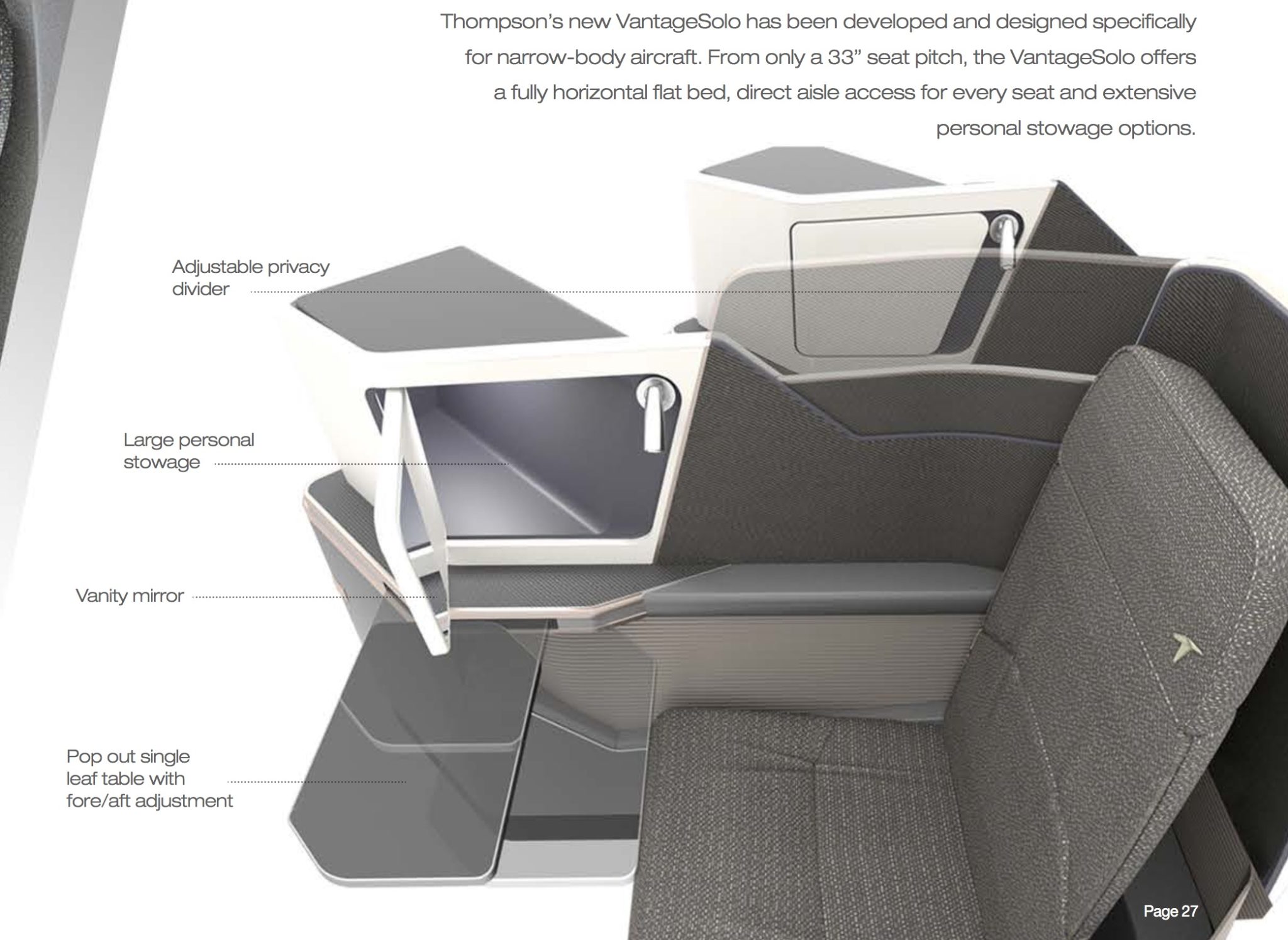 Thompson declined to provide any comment to Runway Girl Network, with Andy Morris, vice president for sales and marketing, stating only: “With regards the Vantage Solo, we’re still at the very early design stages and are unable to release any more information that is contained in the current brochure which can be downloaded from our website.” [sic]

Overall, the idea is sound, although the inward facing herringbone aspect is controversial. I still have a soft spot for the original 747 version of the Virgin seat, which remains spacious with a remarkably unconstrained bed area, although others find the need to turn their neck to look out the window a frustration.

Unlike the Virgin model (which flips over to create the bed space, another point of contention that I actually like on balance, since it avoids the need to have the same seating foam serve as both chair and bed) the Vantage Solo extends to form a bed, like the Delta, Cathay Pacific and Air Canada seats that were the subject of Virgin v Contour. The result of that lawsuit would appear to be the reason why Thompson feels able to create its own remarkably similar product.

The herringbone layout should also enable airlines to create space-saving monuments, both at the front of the cabin where the feet of the front row passengers could tuck into the galley storage space, and at the back of the cabin where the wall between business and economy could include a sizeable closet or self-service drink bar à la JetBlue Mint.

Careful design and collaboration with airlines will be required to ensure that the end product is successful, though. Thompson’s first-generation 2008-era Vantage product on Delta’s Boeing 767s, with its immovable armrests, has not stood the test of time — and indeed, subsequent versions of the same seat on other aircraft in a similar configuration have used movable armrests. As with so many bright ideas, the key will be in the implementation.

Why premium economy on 787 is sweet spot for Air France, passengers

Press Release: Mobility among markets to be served by O3b mPOWER