Allow me for a moment to bring you on an unashamedly rose-tinted journey down passenger experience memory lane, all the way back to my childhood, to the joy of a complimentary afternoon tea sitting in the bright sunshine of a window seat in economy on a jumbo jet during an extended mid-afternoon flying west from London Heathrow to New York.

Growing up shuttling between the UK and USA down the back of British Airways’ 747-100, -200 and -400 jets as I did, one of my earliest and fondest memories of childhood is the afternoon tea service on British Airways. Woe betide the flight attendant who pushed their trolley down the other aisle faster than the one approaching my seat: afternoon tea meant tucking away my book, tidying away my colouring pencils, and getting ready for one of the simpler pleasures of flying.

In the 1980s and 1990s, inflight food was more than a means to an end of keeping passengers from feeling hungry. In the times when the only inflight entertainment was a dimly-lit film projected onto the front bulkhead of each cabin — or, modernity of modernities, the same film over what now feels like an ultra-low-resolution cathode ray tube for passengers sitting in rows in front of the main screen — food was inflight entertainment.

And the afternoon tea was the best of all. 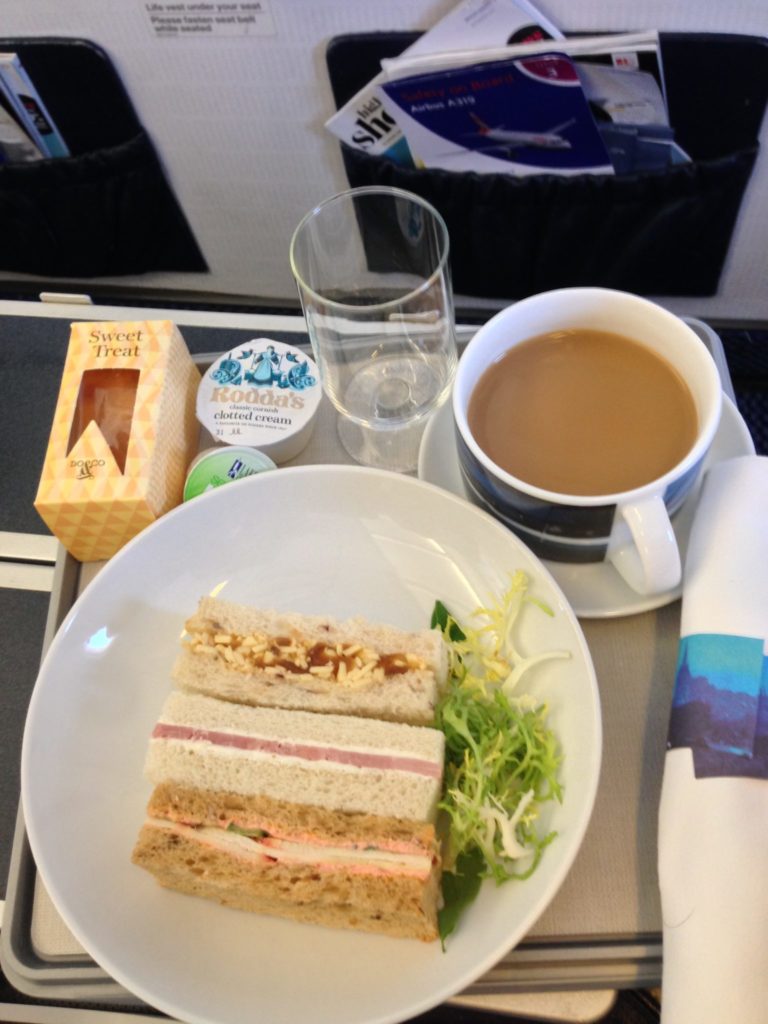 There was something uniquely and happily British about the old afternoon tea service. Image: John Walton

I suspect that the caterers always considered the finger sandwiches to be the main dish of the afternoon tea service, and an early fascination of mine was the progression, as the year and the years went by, of fillings: sweet peppers and cream cheese; coronation chicken; egg and cress; ham with mustard; savoury cheese; thinly-sliced roast beef; tuna mayonnaise; cucumber with the slightest sprinkling of pepper; Scottish smoked salmon.

The trick was always to unwrap the sandwiches from their plastic wrapping one at a time, lest the dry air of an early jumbo jet dehydrate them to a stale unhappiness by the time you’d finished eating the first.

But the pièce de resistance was always the scone.

A scone, sometimes served warmed from a basket, sometimes room temperature in a particularly fiddly little plastic sleeve, sometimes with currants and raisins, sometimes without. It came with a small pot of Cornish clotted cream, always from Rodda’s, the best-known makers of the smooth, creamy, unctuous spread. A little pot of jam — strawberry, naturally — in the perfect proportion to make a big, sticky scone-jam-cream sandwich. (I would later learn that, naturally, there is a cross-border conflict between the counties of Devon and Cornwall over the correct order in which to apply the jam and cream.) 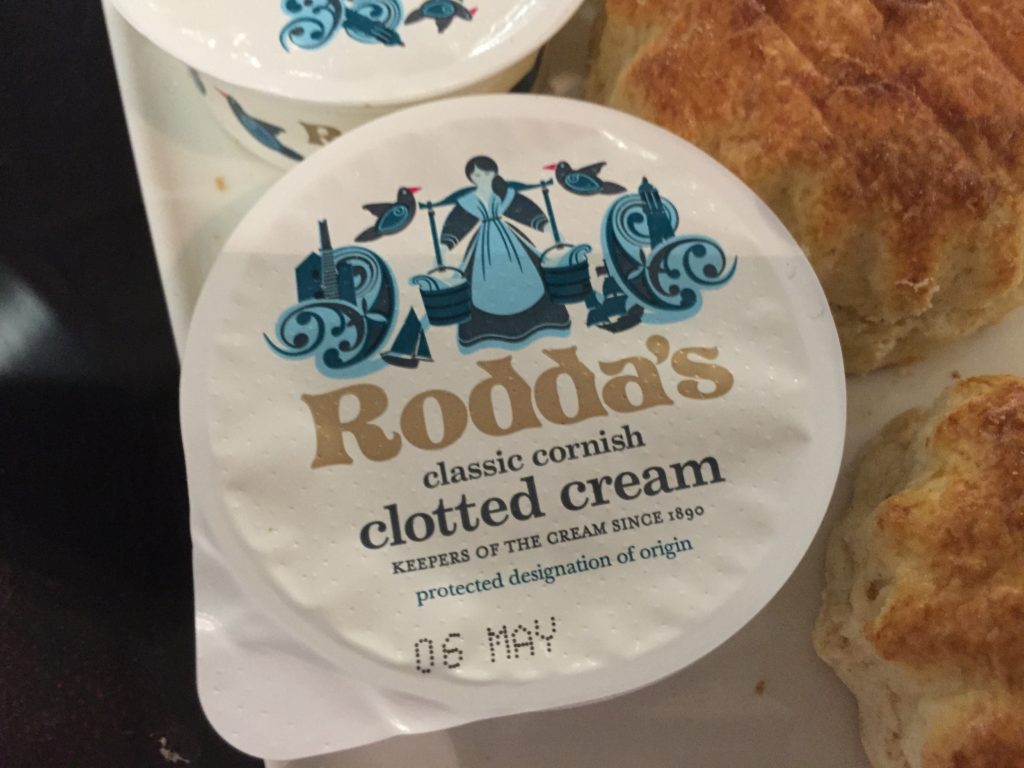 The entertainment in a cream tea — for the difference between regular afternoon tea with sandwiches and perhaps a slice of cake is whether there’s a scone with cream — is assembling the scone. Peel off the plastic seal from the pot of clotted cream. Twist the lid off the mini-jam jar with its satisfying metallic clunk. Break the crumbly scone in half. Spread the cream and jam on the scone, making sure to scrape the very last bits out of the bottom of the jam jar and cream pot. Sandwich the two halves of the scone together like a proper sticky little child and bite into it, trying as much as possible to avoid the tutting of nearby passengers as crumbs inevitably tumble down from your mouthful of fruity, sconey, clotted creamy deliciousness.

A warmed scone, smooth cream and a burst of fruit from the jam — no more. Image: John Walton

And you’d wash it all down with a cup of tea, always with milk, sometimes with sugar. If you were a rebel (and there was a brief period where I was) you’d ask for coffee instead, the bitter instant brew barely palatable with the packet of sugar from your own tray and only slightly more so if you managed to beg a spare sachet from the next passenger.

Ten years later, and shuttling between Heathrow and European destinations in business class, one of the joys of an afternoon flight in Club Europe was the afternoon tea, an almost exact equivalent of my 1980s economy meal except with china teacups. I recall being grateful for it more often than it seems most people were: partly because of my fondness for a happy childhood memory, but partly because I’d often left a hotel before lunch, spent an hour or two making my way to and through the airport, only to find an unimpressive, foodless lounge and no open catering outlets in the non-Schengen zone of EU airports. 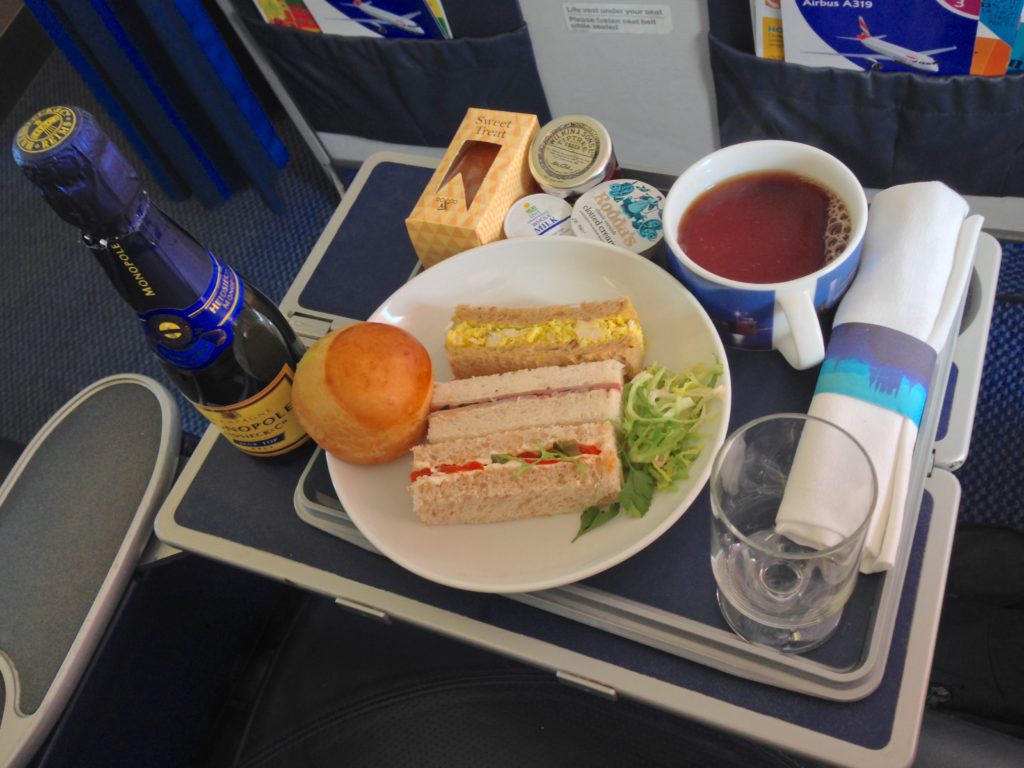 On my latest Club Europe flight — mid-strike, on BA rather than Qatar Airways metal, from London to Lyon with an all-senior crew on board — I shed a tiny (if entirely metaphorical) tear as I discovered that the famous British Airways afternoon tea has gone the way of complimentary gin and tonics in Euro Traveller. But not entirely: it limps on like an overly soggy sandwich, which alas is not the problem with the stale, boring, diminished fingers I was served.

Gone, too, is the joyful production of the basket of warmed scones — always a fun diversion on an entertainment-less BA narrowbody, not least in terms of managing to eat it without spilling jam and clotted cream everywhere — previously served alongside a moist piece of something thoughtfully selected like a lemon drizzle cake, both of which have been replaced by a sad, miserly morsel of Dundee cake. (You’ll have had your tea…)

Its absence feels like the loss of a familiar old friend, and that’s rather what flying British Airways around Europe feels like too. Perhaps it was inevitable, as the rose-tinted Cool Britannia of my childhood gave way to the Brexiting reality of today, but I for one will miss the scone, the clotted cream, the jam, and even the increasingly delightless finger sandwiches.

BA needs to get its mojo back, and soon. It’s all very well to advertise the latest — and, taste-wise at least, pretty greatest — Marks & Spencer sandwiches for economy class, with the food menu left prominently in Club Europe. But if BA is going to be selling a “Posh Club Sandwich” in economy, it would be nice it catered anything remotely approaching that quality to passengers who were actually paying posh Club money for a distinctly un-posh Club Europe seat. 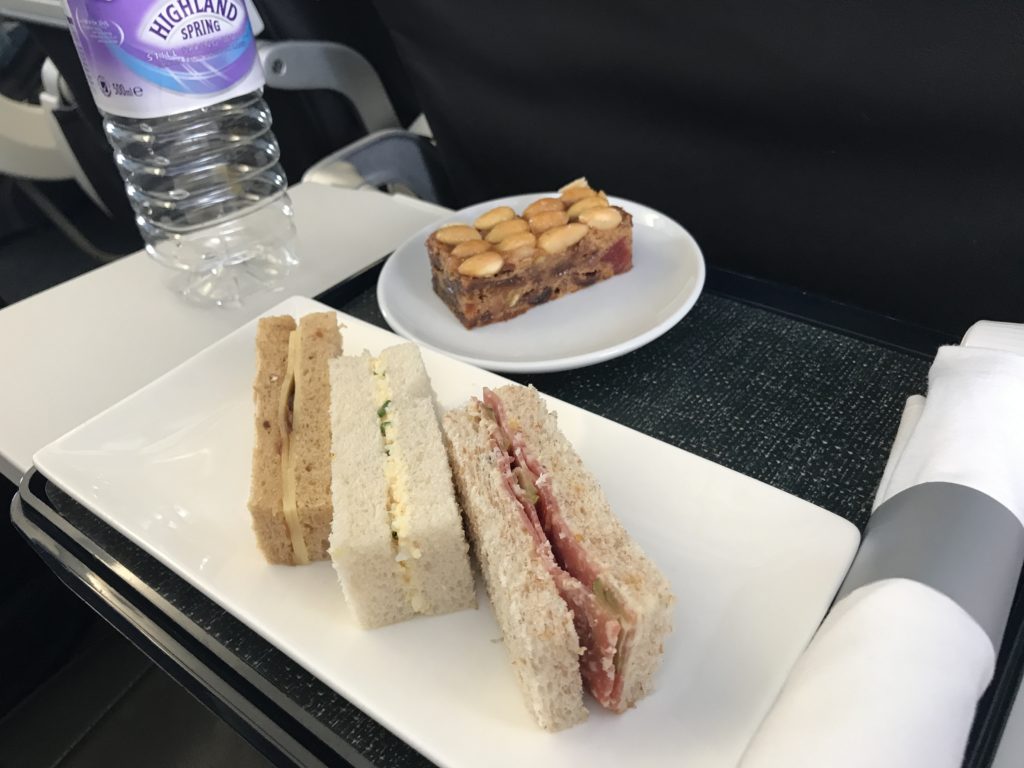 Alas for this limp and lackluster imitation of an old friend. Image: John Walton