Travelling through Europe by high speed train isn’t only speedy, it’s inexpensive, comfortable and productive. I recently needed to travel from rural France near Lyon to Frankfurt, a trip that took five and a half comfortable, productive hours in a wide first class seat with direct aisle access costing just under €80, on one of France’s international TGV trains and a German ICE.

The cost alone — a flight in Lufthansa’s economy (now 29” down the back) for over €340, which is the only nonstop on the route — would have swung it for the train, but the convenience of city-centre travel and the productivity gains of five hours of work time on the train versus five hours of non-productive time was a real bonus. If I hadn’t wanted to go to Frankfurt Airport, I could have stayed on the same French train all the way to central Frankfurt, which would have made the train even more convenient if I were heading into the city.

I boarded the double-decker TGV Duplex at Lyon, following the clear platform digital signs to ensure I was in the right section of the platform for my car. This isn’t quite Japan-style queueing where the door of the train stops at a precisely marked spot, but it worked well enough.

Inside, I climbed the stairs with my luggage and popped it in one of the spacious racks, which were half empty in the mostly full carriage. No weighing or measuring of my bags here, which is a real advantage. 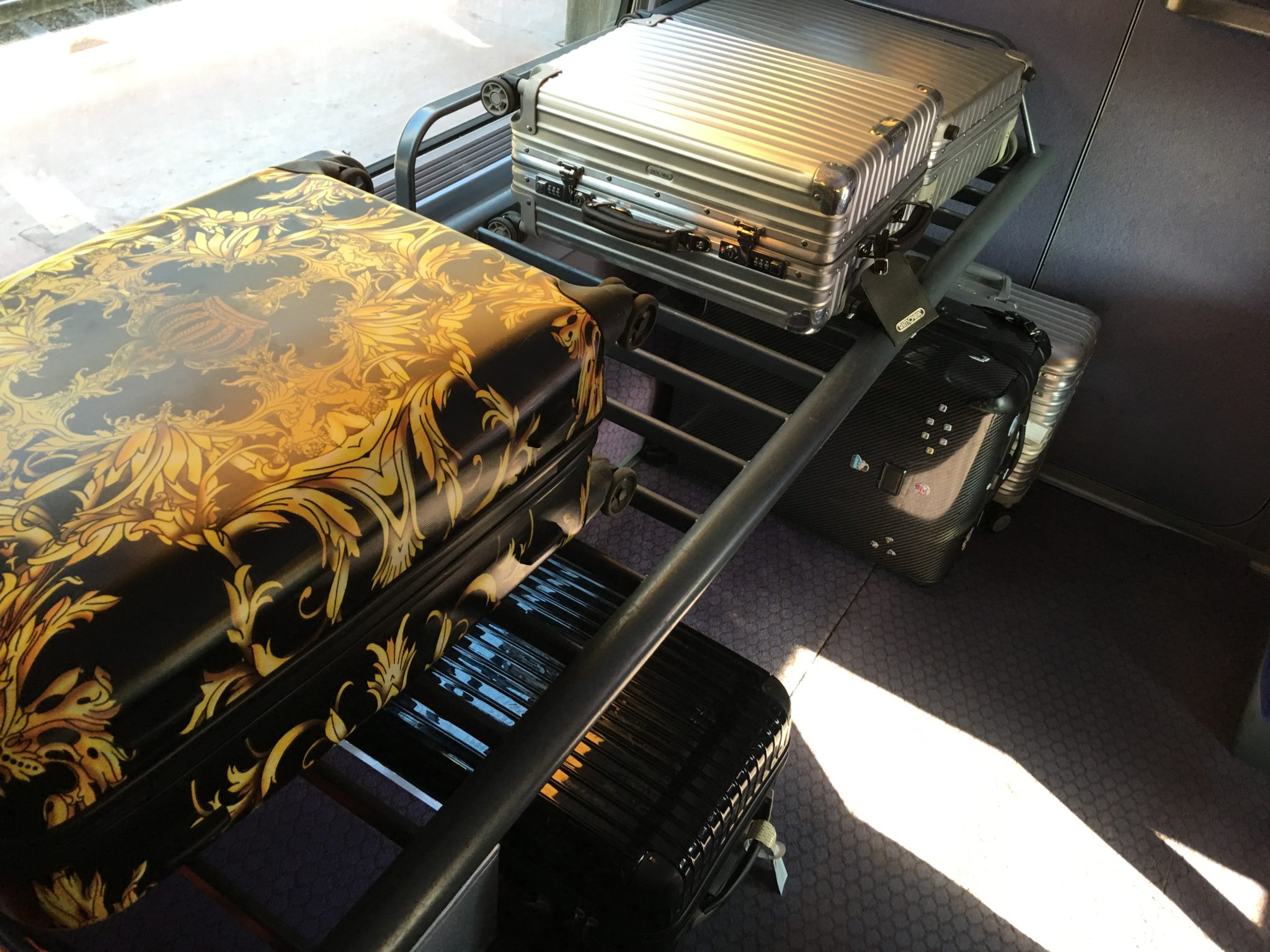 The squashy recliners were supremely comfortable, and my window matched up with the countryside of France that started to zip by at first 260 km/h and then 320 km/h as the train headed along to the LGV Est, one of the newest stretches of high speed rail in the world.

I was impressed that the onboard crew — multilingual in French, German and English — came round quickly to offer at-seat service from the snack bar, and enjoyed a tasty and perfectly melty croque-monsieur with a crisp Kronenbourg beer before knuckling down to get some work done thanks to the at-seat AC power socket and large work table.

After changing crews to a German team at Strasburg, five hours later the TGV pulled into Mannheim for my 18-minute connection for the direct ICE high speed train to Frankfurt Airport. With elevators and ramps, the connection was easy and I enjoyed ten minutes in the late summer sunshine with a cold drink before the ICE arrived.

Where the French TGV first class seats are roomy if a little dated, the ICE3 seats on this train were up to date but less spacious. Rather than making the seats wider, Deutsche Bahn has widened the aisles. The seats were comfortable enough, but I was pleased to have been on the TGV for the longer leg of my trip.

A full bar and bistro/restaurant car sits between first and standard class, although the first class attendant offered to bring my glass of German Sekt sparkling wine directly to my seat. I was delighted to find myself in one of the nose sections of the train, right behind the driver’s seat. If only this had been the front of the train rather than the back, or at least the train hadn’t been coupled to another! Regardless, it was a slightly odd yet very cool passenger experience, with added whimsy from a little packet of complimentary Haribo gummy bears.

But the key to the overall experience was the matter-of-fact simplicity of this kind of European interconnectedness across national borders and rail networks. It’s this well-designed connectivity — together with the #PaxEx advantage over airlines — that makes high-speed train travel in the EU so appealing. 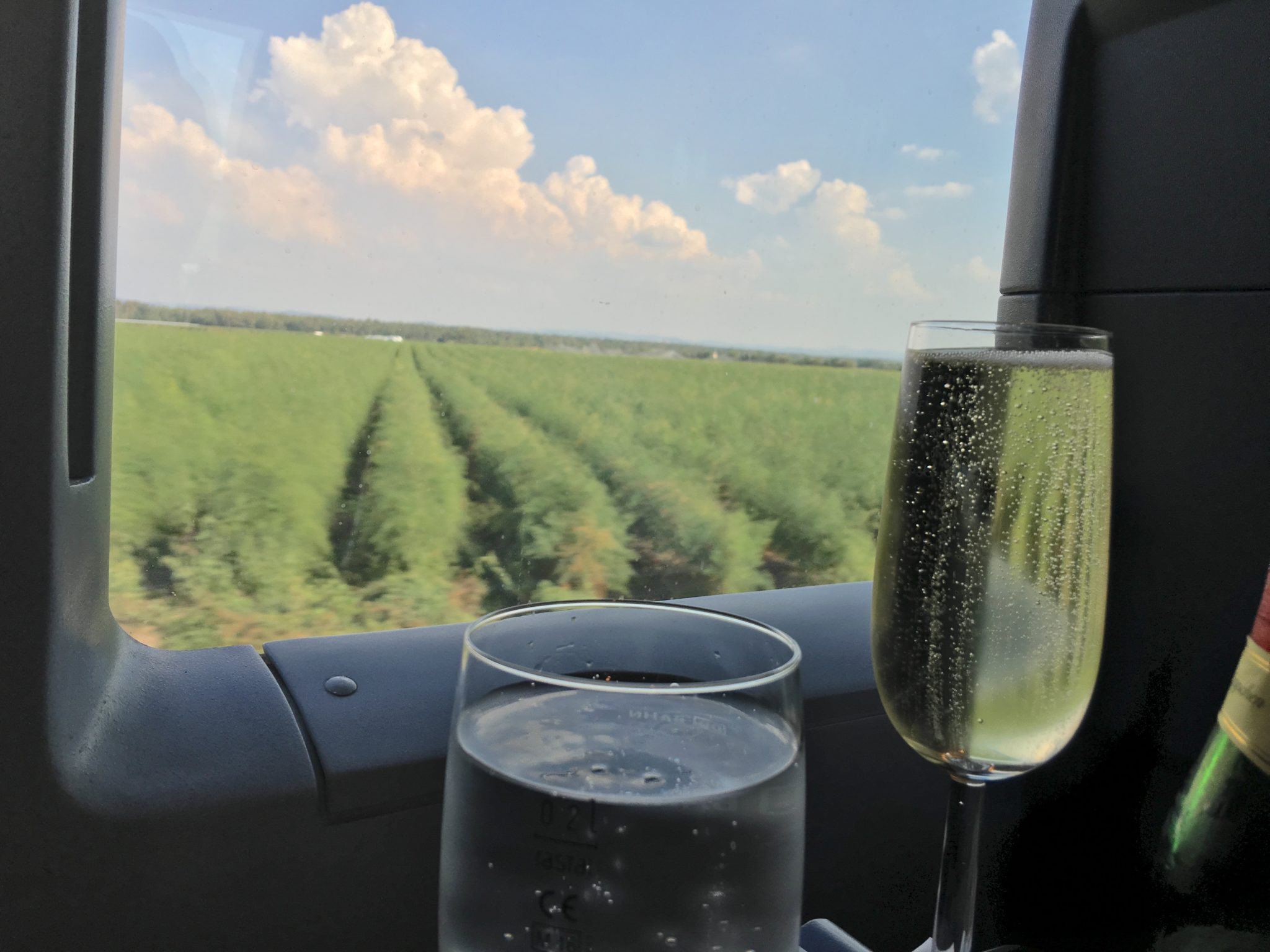 A glass of bubbles and a window seat on a sunny day – ideal. Image: John Walton