“If only we had a bullet train.” That’s how most visitors to Japan respond after experiencing Japan’s super-efficient, scrupulously clean, simple to navigate and blindingly fast Shinkansen high-speed rail system, which stretches from end to end of the largest island, Honshu, and down through most of the southwesterly industrialised island of Kyushu.

Yet what can the airline industry outside Japan learn from the passenger experience (#PaxEx) on board these awe-inspiring trains?

Inside the Shinkansen trains

On most trains, there is a two class system, with standard class and Green Car, which generally provides more legroom and fewer seats across.

All trains have standard class seating, usually in a 2-3 configuration, but on some newer or refit Shinkansen standard class is in a more spacious 2-2 layout. The various JR operators (the network is split regionally between a number of largely privatised train companies) have been open about their reasoning for improving passenger experience: to compete against the small seats onboard Japan’s domestic low-cost carriers. 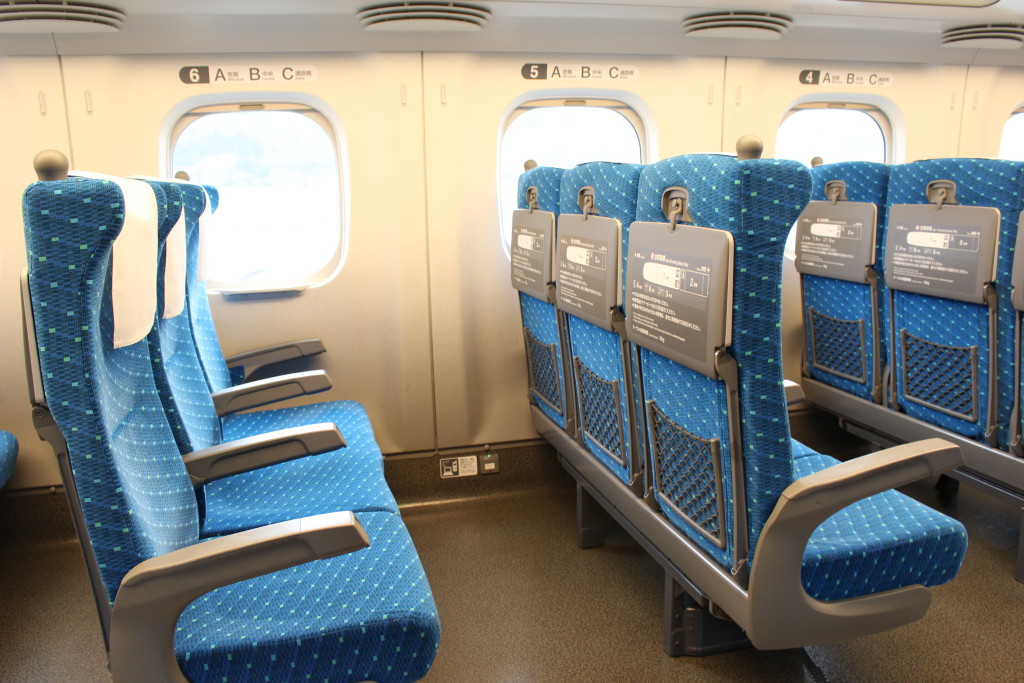 Seat pitch even in standard class is superior to airlines

Green Car is a very pleasant way to travel, generally with a 2-2 layout compared with 2-3 in standard class, although there are exceptions: the relatively new Kyushu Shinkansen in Japan’s southwest is 2-2 throughout to attract passengers from slower trains on the basis of comfort, and LCC-competition Hikari Rail Star trains within the main island of Honshu are also 2-2 for similar reasons.

Interestingly, Japan’s domestic full-service airlines ANA and JAL follow the “slightly better than standard” for premium domestic seating, with their “Class J” style products in a 2-3 configuration on standard narrowbodies like the Boeing 737 within Japan. In comparison with domestic first in the US or business in Australia there’s less space — but the price is commensurately lower as well. 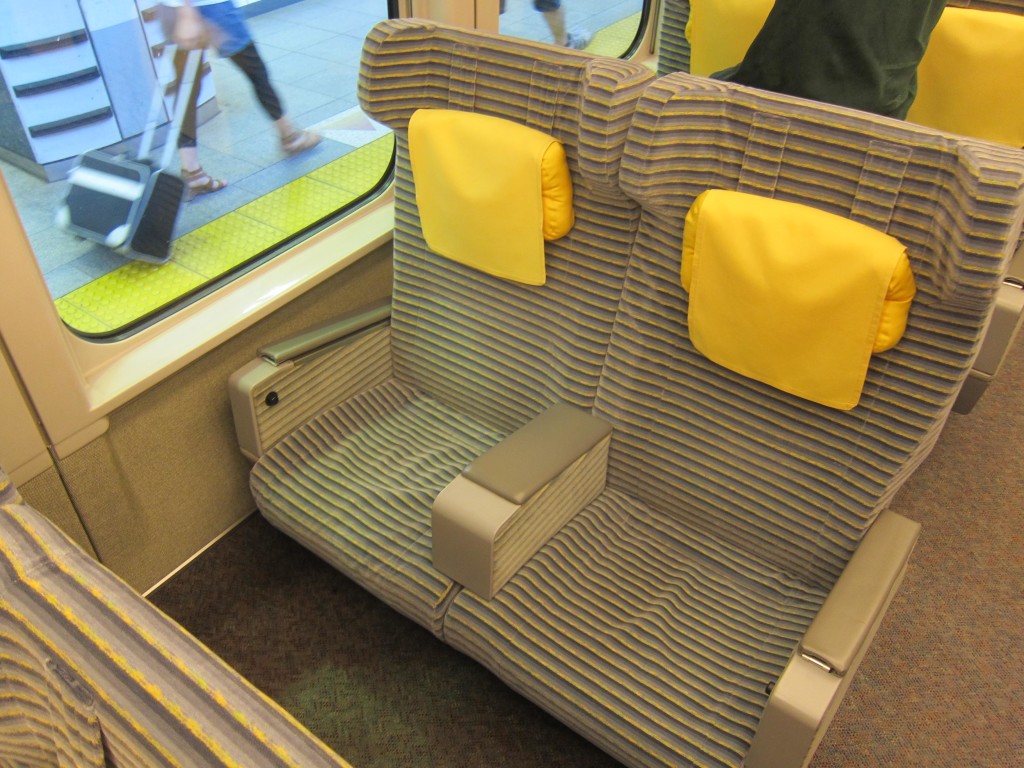 Some newer Shinkansen lines, notably in the northeast of Japan, offer Gran Class, which is superior to Green Car and has pod-style recliner seating, but not on all trains.

Power is offered at-seat on newer Shinkansen train sets, and although it might seem surprising to outside observers that tech-loving Japanese passengers were not clamouring for AC sockets on older trains, the power bank (rechargeable external lithium-ion batteries for personal entertainment devices) was a staple of Japanese electronic stores long before it arrived in the west. With the potential and actual dangers of lithium-ion battery fires on aircraft well demonstrated in recent months, more power outlets would certainly be a sensible  model for the airline industry to emulate.

In addition to standard lavatories, Shinkansen trains also offer urinals for male passengers, and with the increasing focus on optimising lavatory space in the aviation industry it is surprising that we have only really seen these in premium aircraft cabins. The urinal facility means that the standard lavs remain cleaner, and the in-and-out speed reduces queueing. With fewer lavatories per passenger being installed on new and refit widebody aircraft, this would seem to be an obvious opportunity for space optimisation.

Information, too, is helpful, prominent and multilingual. The front and back bulkhead of each Shinkansen carriage is fitted with a display screen that displays a variety of multilingual content: the train type, destination, next stops, as well as advertising and public service information. Further info, including the location of the seat in the train is printed on the underside of the seatback tray.

It’s surprising that the airline industry isn’t better at providing information (whether flogging scratchcards or credit cards), but the real benefit could be for providing information to passengers in an age where the overhead monitor has been largely relegated. In particular, with the advances in lightweight and easily updatable screens, information in multiple languages (especially where the crew are only nominally competent in a spoken language) could be displayed clearly and as appropriate to the phase of flight. 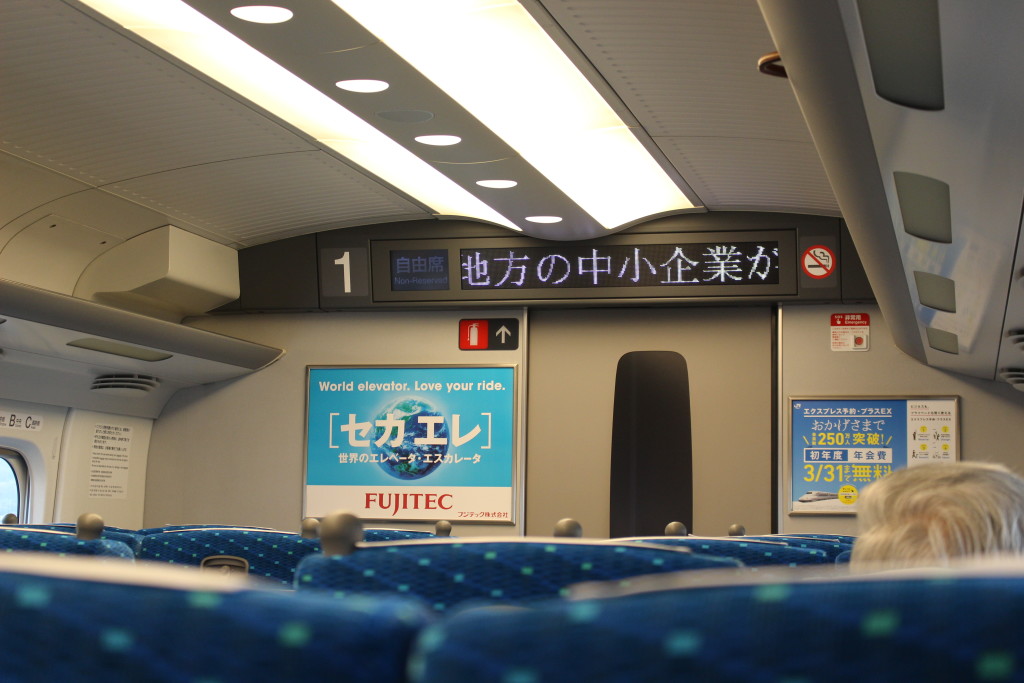 Before getting on the train

Boarding is a fascinating process and can seem like a near-miracle of efficiency to passengers from other countries. Each Shinkansen platform has a series of numbered decals on the ground that specify exactly where the door to each carriage will arrive on the platform, with printed lines on the ground denoting where boarding passengers should wait in order to be out of the way. Where more than one type of Shinkansen operates, there are different decals. Need car 5 on a Hikari train? Look for the number 5 and the word Hikari. Within a matter of seconds — rarely more than a minute — after stopping, passengers have disembarked and boarded.

The MTA is attempting to train New Yorkers on how to wait for the subway. Good luck with that. pic.twitter.com/M77825UXi3

Clearly, that’s not for every society, and the eight to sixteen car length of the Shinkansen, together with its pre-set routes, gives it a multi-door boarding advantage. Yet there are few airlines and airports working to fix the one-door, chaotic boarding process to benefit speed and ease of boarding — although of course numerous airlines board premium class passengers separately from economy on larger aircraft for passenger experience reasons.

Food to bring on board the Shinkansen is also worth mentioning. The uniquely Japanese ekiben — delicious regional specialities in train-friendly bento-style boxes, sold at kiosks on the platform and in the main station at many locations and eaten cold on the train — predates the Shinkansen but has developed further with the spread of the high-speed network. There is an opportunity here for airlines to learn from the Japanese way of providing space-efficient, compact souvenir meals, and to do so profitably: less elegant bento-style meals are sold in konbini convenience stores all across Japan, but ekiben are a premium product, sold at a premium, and purchased gladly. 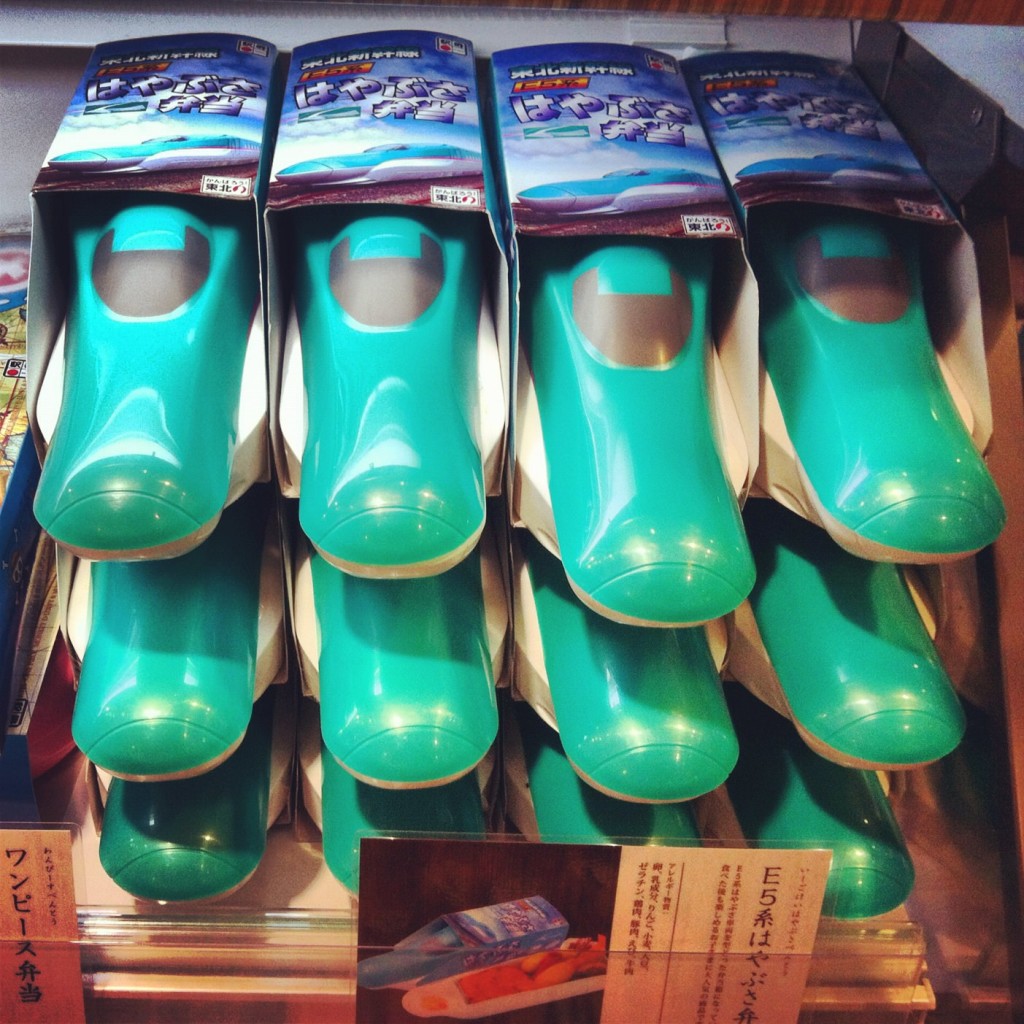 Ekiben meals even come in the shape of Shinkansen trains!

Airports, too, have an opportunity to differentiate and delight passengers: imagine US airports serving regional specialty sandwiches, salads or chilled tapas-style meals rather than the ubiquitous pretzel and cookie outlets…and imagine them doing it at a premium that reflected the quality of ingredients rather than because the captive market means they can charge $14 for a damp turkey sandwich.

When it comes to the end of the journey, the cleaning teams on Shinkansen also impress, with smartly uniformed and highly trained crews leaping onto the train as soon as the last passenger is off. The trains are also designed for speed in cleaning, with net pockets offering visibility of any rubbish, and a cultural convention to bring your recycling and trash with you when alighting from the train. At larger stations, cleaning crew wait with an empty bag for rubbish and recyclables by the door of each car.

There are clearly numerous differences between the Shinkansen and air travel in all its various national and regional contexts. Yet the success of this remarkable rail system means it would be foolish to ignore the opportunities for mimicking the best of Shinkansen’s #PaxEx initiatives.

How ViaSat will preserve bandwidth for hungry airline passengers