Sometimes I have the joy and the privilege to experience an airline service so excellent that I wish it served as an example of how to surprise and delight passengers.

It might not be surprising that it was a first class service on a Japanese carrier — both ultra-premium cabins and airlines of Japan are almost expected to be excellent — but the experience was so outstanding that it’s well worth the analysis.

With some of the best food I’ve ever enjoyed at altitude, ANA first class, which I flew thanks to cashing in miles from Frankfurt to Tokyo Haneda, exceeded my already high expectations.

ANA's first class food is among the best I've eaten in the sky, hands down. #thatjohnonnh #paxex pic.twitter.com/ltaoMVBagK

Let’s be clear, though: ground services at Frankfurt were mediocre business class at best. ANA uses its own checkin at Frankfurt, but it isn’t particularly upmarket or special, being a single first class desk that also serves the airline’s frequent flyers. The airport’s security queues were the normal business/first class line that have all of the warmth and pleasantry for which Frankfurt Airport is deservedly not renowned.

The six deep queue for first checkin – and the lack of proactive assistance from business – wasn’t ideal. Image: John Walton

The Frankfurt lounge is Lufthansa’s Senator level offering, which would be fine for a business class lounge but which is decidedly sub-par for first class. It’s a shame that ANA and the other Star Alliance airlines serving FRA haven’t clubbed together for an LAX-style joint first class lounge, if Lufthansa isn’t going to budge on letting other airlines’ first class passengers into its facilities.

Boarding, however, was well above average for the usual Frankfurt scrum, thanks to what felt like double the number of staffers for a normal widebody departure from the airport. Efficient queueing by the largely Japanese passengers, of course, also helps. 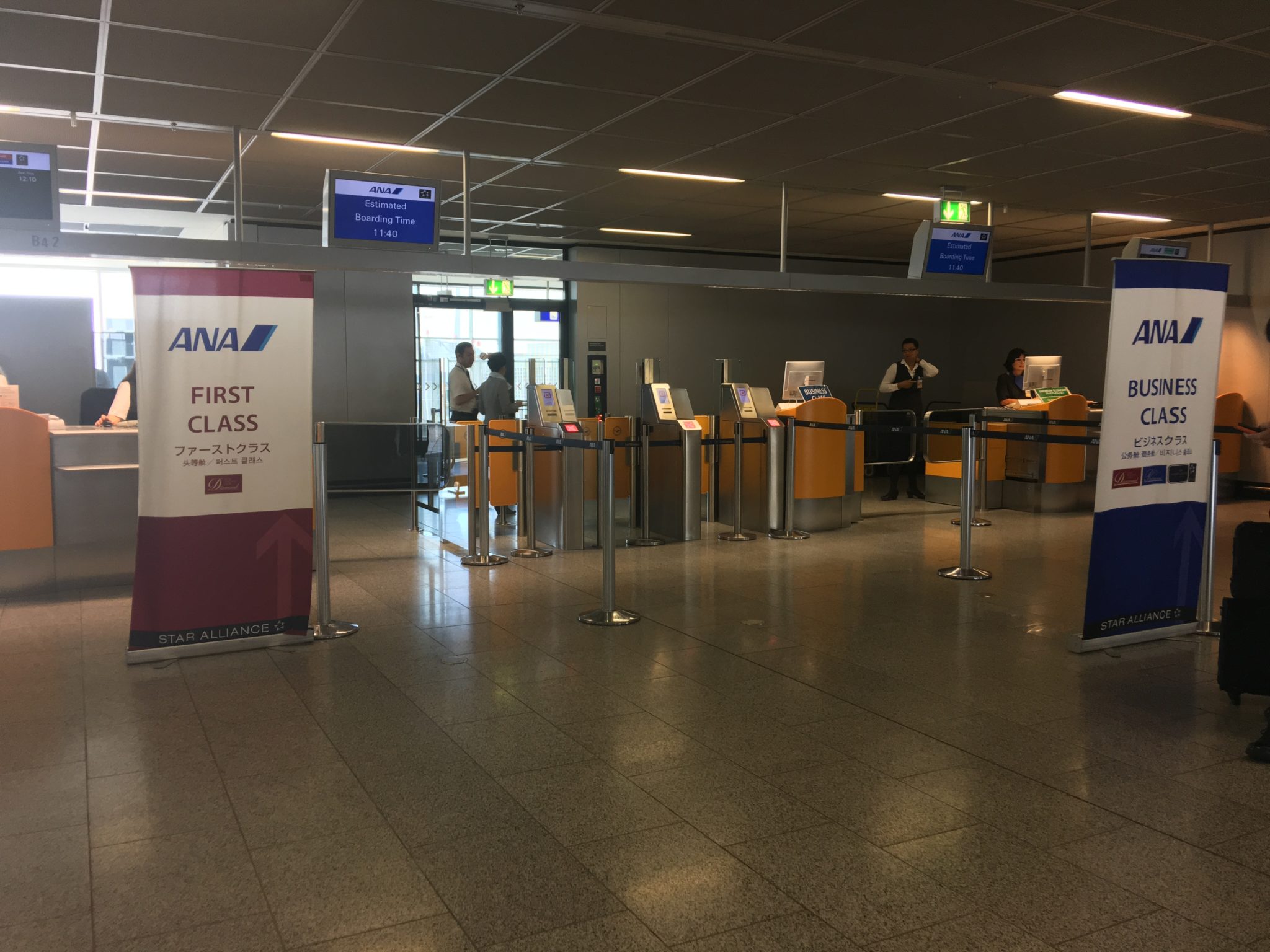 Boarding was efficient but I could wish Frankfurt were a little less drab. Image: John Walton

ANA’s focus on omotenashi — Japanese style hospitality, carefully considering and anticipating the needs of customers — was evident the moment I walked on board. Smiling flight attendants greeted me and I was ushered all five feet to my seat, 1A, before the flight attendant offered to hang my jacket in my personal coat locker.

The eight first class seats were ANA’s latest, the First Square product. Yes, it rather feels like an office cubicle. That is, perhaps, the point, given the largely C-suite audience to whom the styling is aimed. It’s also quite functional, especially on the relatively wide 777 cross-section, enabling the coat locker and numerous options for stowing personal items in addition to a wide seat.

Once I got over the cubicle feel from the outside, I was delighted by the attention to detail in the seat. From the half-dozen compartments for spectacles, headphones, mobile phones, and so on, to the clever swing-out carbon fibre effect side table to the beautiful mirrored shine on the main table and its graceful sliding motion, I think ANA should be rightfully proud of this seat in every aspect but one.

The one thing I disliked was the way that the audio controls and headphone stowage on the outboard side of the seat got in the way of the view. The length of my seat would have given me four full windows, but the two that would feel most natural to gaze from were blocked by the seat. Given this flight had a good six hours of daylight, I missed the great view of northern Europe that our route would have offered. I’m faintly baffled by this decision: Japanese train #PaxEx designers have long maximised the view from long distance and excursion carriages, and it’s odd that ANA hasn’t gone the same way.

Lots of storage and multiple reading light options—but not for looking out the window. Image: John Walton

I appreciated the wide range of inflight entertainment on a crisp screen, although like many first class products the screen is six feet away and feels small. These days, airlines need to be investing in wall-to-wall screens in first class.

Top marks, though, for the charming Sky Eye “Tastes of Japan” prefectural tourism videos. These sub-half-hour shows feature the local equivalent of Miss Apple Grower 2015 and whatever the slightly odd yuruchara anthropomorphic mascot is for the region.

Not only is this a great way for foreigners to dip their toes into part of Japanese culture, it’s exactly the sort of uniquely homegrown tourism promotion content aimed squarely at visitors that airlines can do really well. They’re now appearing on YouTube, so take a look:

But I simply can’t say enough good things about the food and beverage on board. I’ve flown my fair share of first class products, but ANA’s simply took first prize in every way.

Let’s start with the wine. ANA serves the eminently delicious Krug as its signature first class Champagne, and it’s hard to argue with that for any reason other than that quite a few other carriers serve Krug too. But ANA dismisses all those concerns by offering a second, rotating selection of vintage Champagne: in this case, the 2006 Palmes d’Or from Nicolas Feuillate.

Now, Feuillate’s standard Brut is nothing to write home about, but the Palmes d’Or is an all Pinot Noir vintage with a stunningly deep colour and fascinatingly fruity taste. I’d never had it before, but it stood up very well to both the Krug competition and the altitude of the cabin.

Every other wine I tried on #thatjohnonnh was also delicious — including the Japanese Koshi. A+ port too. #paxex pic.twitter.com/d2sJv1E0TD

Of the rest of the wine list, I sipped at tasting glasses of the Margaux and the Beaune when I had the beef cheek dish later in the flight, but neither of these famously expensive wine regions produce bottles that show in their best light at altitude. The Petaluma Shiraz, however, stood up a little better.

I also rather enjoyed the light, delicate Koshu, a Japanese grape from a vineyard in Yamanashi prefecture, near Mount Fuji. This kind of showcasing of homegrown products to a discerning international audience is a key part of truly excellent first class passenger experience.

Fruit and fruit juice are surprising luxury items in Japan, with $35 melons or nashi pears frequently seen in supermarkets and upmarket fruit shops. This tart but sweet juice was utterly delicious, and ideal for altitude.

Let’s talk food. For this flight, ANA caters its main meals out of Frankfurt but the light meals are return catered from Japan, which made the quality of the ex-FRA catering all the more impressive.

Western and Japanese menus are offered, both for the main meal and in the section of mix and match smaller dishes. Playing to ANA’s strengths, and as a big fan of the elegant Japanese kaiseki style of dining, I skipped the Western option and went for the Japanese meal.

I won’t go through every single morsel of food I enjoyed, but the fish was fresh and delicious, while the tastes and textures of each course were varied and contrasted very well. The sakes that the crew suggested to pair with each set of courses went down exceptionally well too.

In characteristic Japanese style, too, the place setting, glasses, bowls, plates and even chopstick-rest were beautiful, almost as much of a work of art as the carefully designed and prepared food that was served on them.

#thatjohnonnh setting four: the "main course". The amberjack was simply stunning, as was the 🦀. #paxex pic.twitter.com/xMGhjXOph3

Overall? The best food I’ve ever enjoyed on a plane. As we know, umami is the taste that works best on aircraft, and a lot of Japanese food is redolent with it. Is that why this meal stood out? Was it the impeccable hospitality, served elegantly, on beautiful tableware?

Later in the flight, the flight attendants proactively suggested some typical Japanese snacks to enjoy while watching films, including small bowls of Japanese and international favourites.

Later (much later!) In #thatjohnonnh I tried the curry, pork loin & ramen. Curry was my fave, but airplane ramen 💯. pic.twitter.com/CwZKsyzp4L

And, shortly before descent, the crew were lovely enough to bring round a birthday cake — not pre-arranged, but just after I’d mentioned it to one of the flight attendants while chatting after takeoff. When it comes to surprise and delight, ANA hit both with this gesture, all the way down to the purple petals that matched my shirt.

And just before landing the amazing crew brought me out some birthday cake, with purple petals. #thatjohnonnh pic.twitter.com/qsvHbM812E

The pair of first class lavatories were kept spotless throughout the flight, and were well stocked with Shiseido brand upmarket cosmetics, together with ANA-branded necessaries. 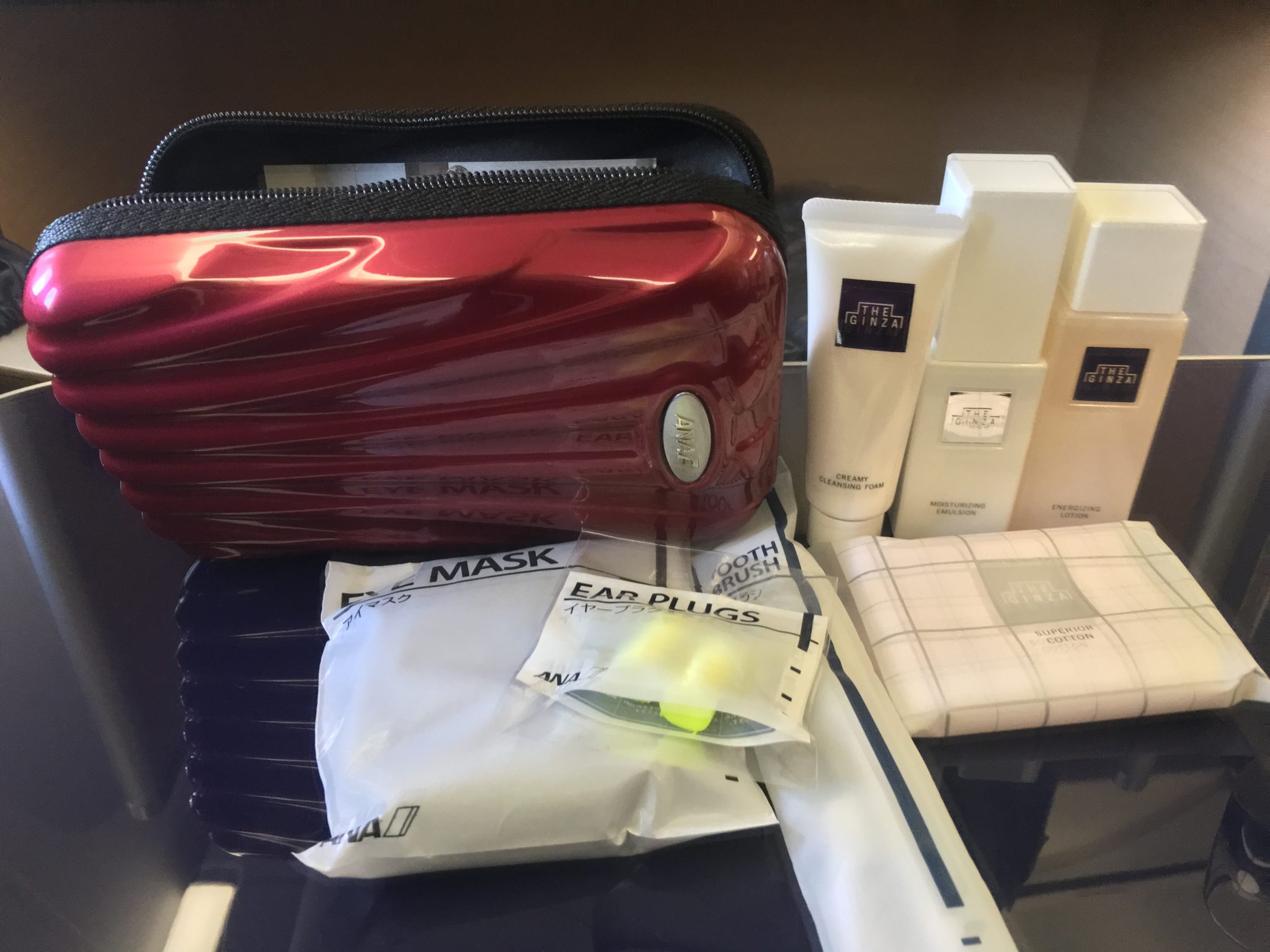 Panasonic Avionics Ku-band connectivity was available, but truly insanely priced throughout the aircraft (not just in first class). With more airlines offering complimentary wifi to premium passengers, this is an area for ANA to examine closely.

Apart from that and the Frankfurt departure experience, though — and neither wifi nor outstation lounges are handled ideally by any longhaul airline — this was truly a superlative flight. If only they could all be like this. 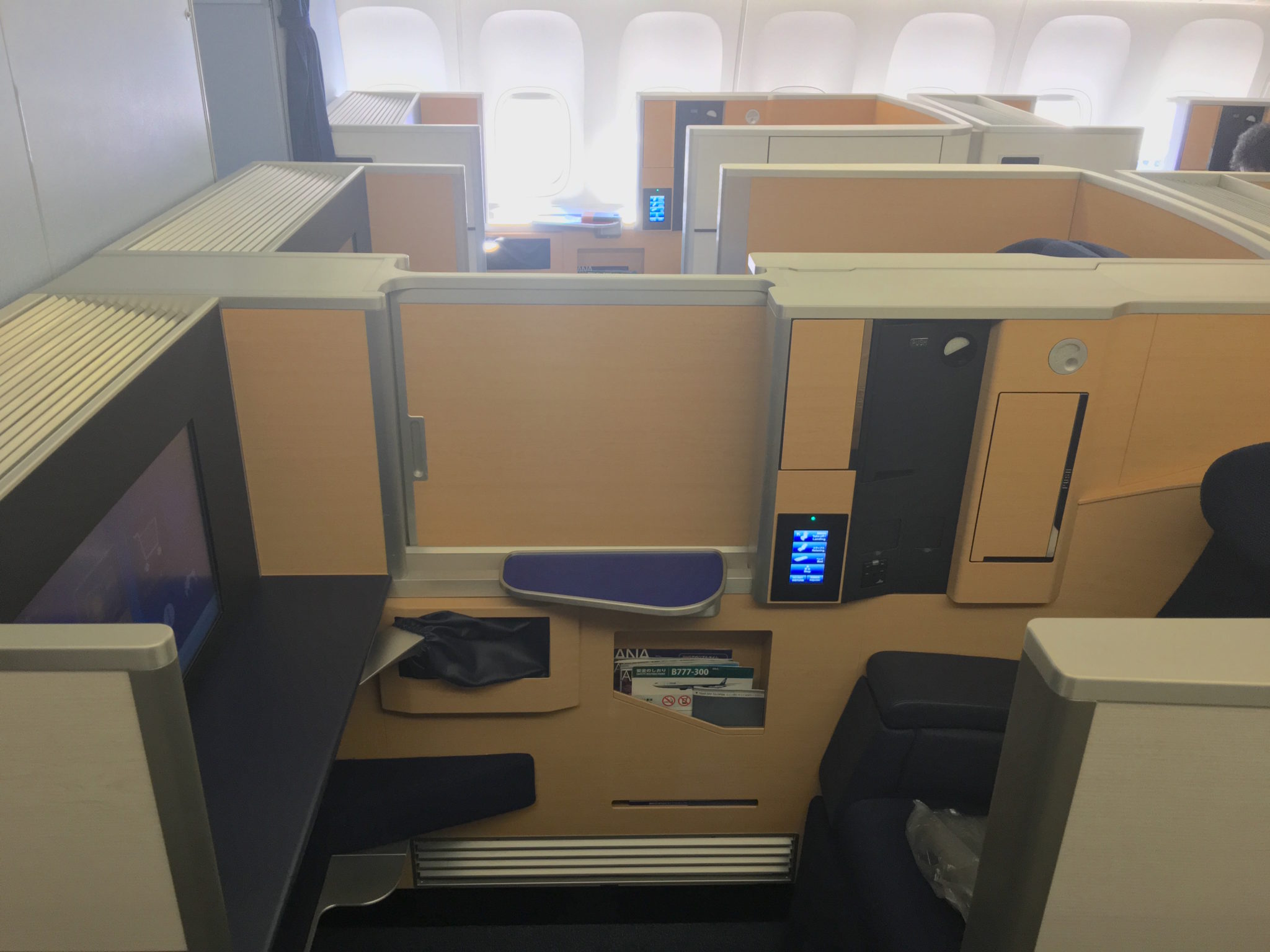 The wood effect is quite modern Japanese in it’s aesthetic and the seats are almost as private as suites. Image: John Walton