United Airlines’ new commercial for its Polaris business class struck a chord with me this week, not least because it’s fascinating to see what an airline thinks it needs to advertise — and wants to advertise — when unveiling a significantly revamped class of service that it intends to position between business and first class, “redesigned from Ahh to Zzz”.

The format of the ad is a relatively cutesy mnemonic that spells out “Polaris”, which United’s British voiceover artist (I see Brits are still the voice of distinction and refinement even after Brexit) for some reason pronounces “Pol-air-iss” rather than “Pol-ar-iss”.

📊: How do you pronounce "Polaris"?

Permission to indulge: a glass of sparkling wine sits on a table, and one is delivered to a passenger in the new signature Polaris carrel inside an airy branded Polaris lounge.

United will up its lounge game with the Polaris lounges it plans to roll out to major hubs. And it needs to, if it is to compete with international carriers. There is, to an extent, a fair amount of opportunity here. United’s outstation lounges have recently seen upgrades, and in certain airports the competition has not kept up with the pack.

Yet even the generally well-received United Club at London Heathrow Terminal 2 isn’t truly up to snuff even compared with the other Star Alliance lounges in that same terminal. From what United has said and shown, the Polaris lounges will be a big upgrade, on par at least with Delta’s Sky Club facilities.

That's right, United flyers, Sodexo's LHR #meatgruel may be coming to a United Club near you! #paxex pic.twitter.com/NLq7ZsBNNd

Out of this world: a waterfall shower rains down as a passenger opens a door.

Clearly, with two of seven point of the Polaris acronym focussing on lounges, this is where United hopes to differentiate itself. The clean, elegant shower head in the ad contrasts favourably with the grubby, dingy, worn shower rooms in British Airways’ Heathrow Terminal 5 lounge complex, which are in a shameful condition and don’t seem to have been upgraded in the eight years since that facility opened. It wouldn’t take much to push the newer United facilities there ahead of the competition.

Loving the seasonal cuisine: a signature food choice is plated and presented, and more food is presented at what looks to be a “third place” in a pass-through between cabins. Without wishing to draw too many conclusions from what is a relatively quick shot, I’d be very surprised to see this kind of space appear in the advertised form on an aircraft, though — this kind of third place is usually located between the main boarding doors 2. 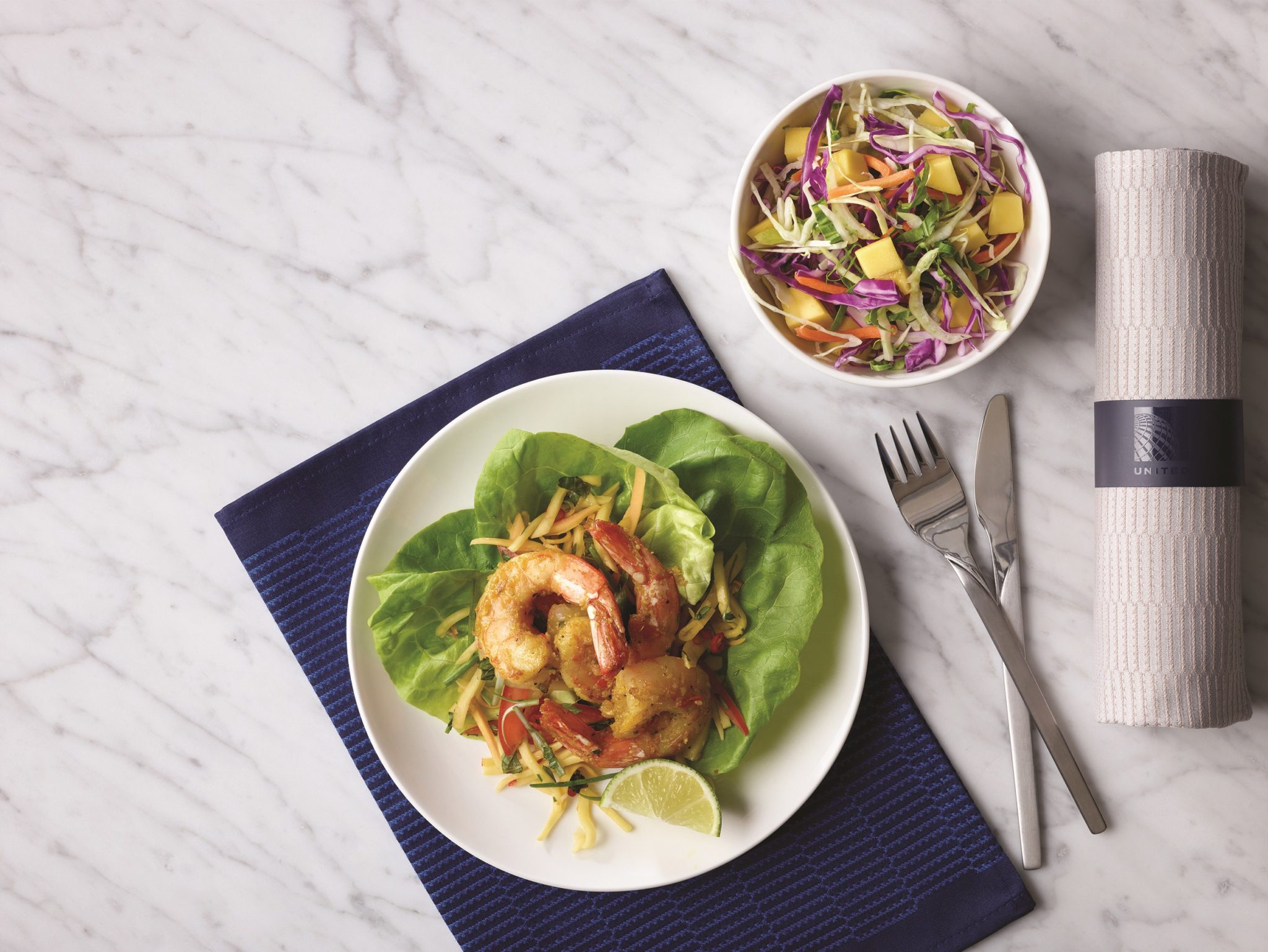 Seasonal cuisine is on the menu. Image: United

It would also behove United to think about how to make the space more inviting and welcoming — shades of slate grey do not compare favourably with mood-lighting and premium-feel surfaces with which that other airlines have outfitted these spaces, nor indeed with the attractive surfaces with which United’s Polaris seat has been presented. Still, this mixture of soft product and hard product focus is interesting given United’s previous offerings.

Access to everything, including the aisle: with an overhead shot of the centre seat section, including a visual demonstration of how the Polaris customisation of the Zodiac SkyLounge seat, United is hitting hard on the hard product. It doesn’t truly address the zero-sum game of staggered seating, but it does show that Polaris voids some of the worst issues around aisle-adjacent passengers being bumped or feeling less private than passengers with the foot cubby/side table between them and the aisle.

It’s rare for an airline to so clearly show how its seats are arranged, with most preferring to show contented passengers with Mona Lisa smiles reclining to flat, enjoying the inflight service, or being served by preternaturally pleasant flight attendants.

United’s decision to go big with its seats suggests that the airline thinks it has a product that both displays well (which it does, notably with a second appearance of the marbled side table surfaces, which are delightful) and eclipses the product offered by the competition (which it does, to an extent, given the rollout of less zero-sum, more spacious outward-facing herringbone seats on both American Airlines and Delta Air Lines). 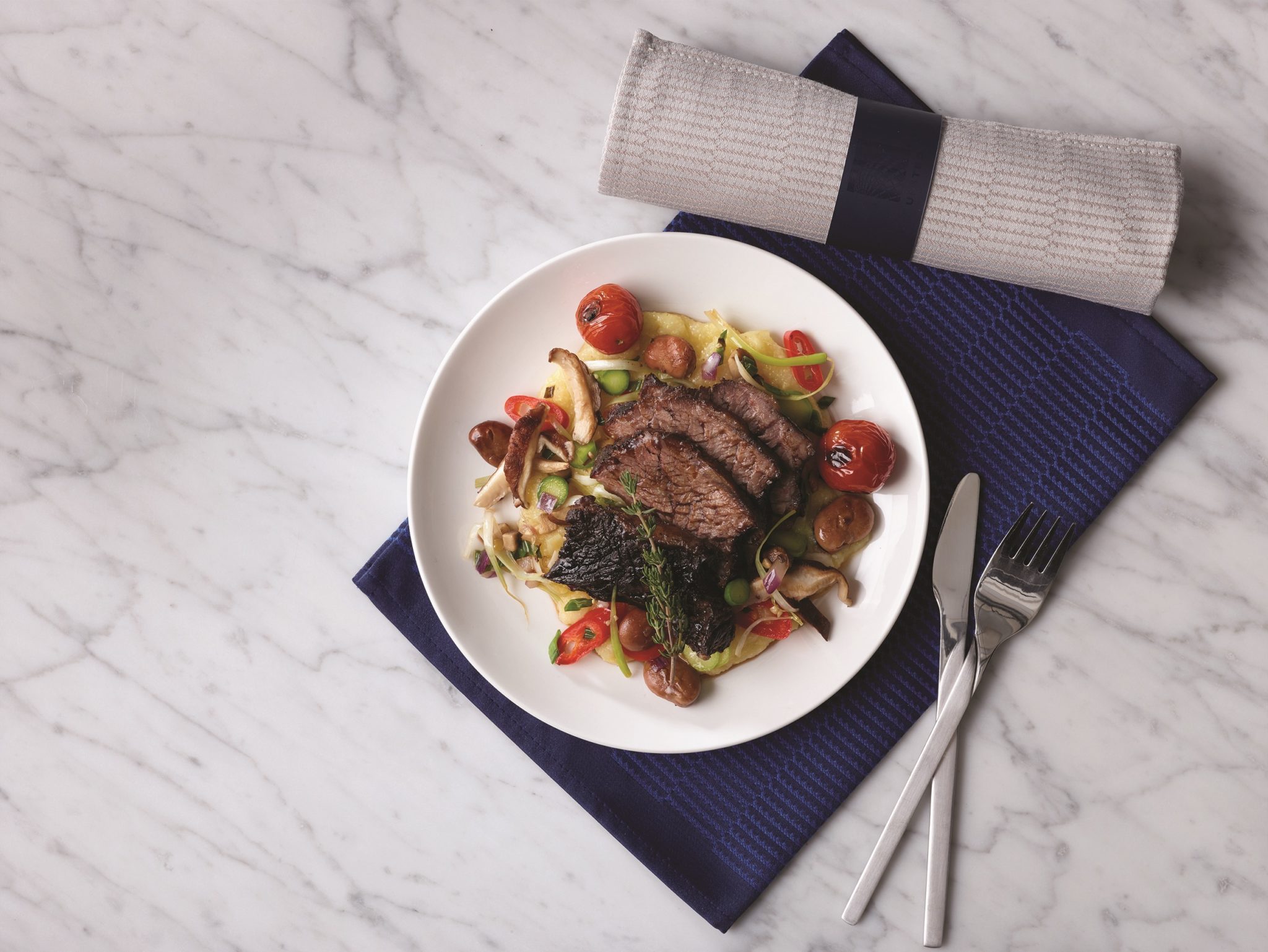 The innovative marble textured side table returns again and again in the ad. Image: United

Reclining in tailor-made bedding: United shows its ribbon-tied Saks Fifth Avenue partnership linens being unwrapped like a present, before a return of the marbled side table with a pair of spectacles placed on top for, one assumes, bedtime.

Apart from the focus on the innovative marble surface, United is showing that its product meets one of the frequent criticisms of the previous generation of seats (including its own pre-merger United business class product): that there is nowhere for people who wear glasses to put their specs while asleep.

I must be dreaming: a passenger sinks into a full-sized pillow with, again, the Saks logo.

Co-branded bedding is nothing new, although partnering with a department store is an unusual and perhaps brave choice. The Saks Fifth Avenue brand still feels too fusty, grandmotherly or Nantuckety for the range of markets United will need to reach, and jars when contrasted with the much younger and funkier Cowshed amenities provided for Polaris passengers.

So long, jetlag: a third focus on the sleep side of things, and another overhead shot, this time of the window seat, with the marble side table making another reappearance, as a flight attendant hands a passenger’s jacket back.

A key part of United’s Polaris introduction has focussed on the sleep function of modern business class seats. The very branding — stars can only be seen in the night sky, after all — is intended to underline this aspect of the business class cost-benefit analysis. Indeed, the opportunity to get a good night’s sleep en route and arrive rested is perhaps the most important factor for business class passengers, whether travelling for work or for leisure.

Meet the experts behind Polaris:

Overall, the focus on sleep and the hard product is unusual. The pre-merger United business class seats are the worst fully flat product on the market in their very narrow, 2-4-2 forwards-backwards configuration. While the pre-merger Continental seats (B/E Aerospace’s Diamond product) are better, neither has direct aisle access for all passengers. The Zodiac SkyLounge Polaris seats are a big improvement, but I still have concerns that the airline will rue the selection of a staggered business class seat as more and more competitors coalesce around the outward-facing herringbone (American Airlines most recently). 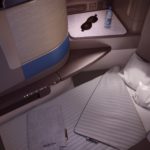 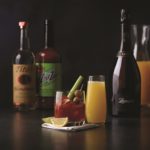 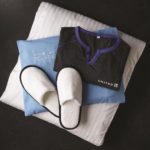 Interestingly, these amenities make no appearance in the ad whatsoever, with passengers sleeping in their own clothes. Image: United

Sing Street will leave you singing in the aisle