HAMBURG — In the global mainline airliner duopoly, the number of entries into service of new and revitalised jet aircraft is relatively low in historical terms. Yet the regional market that stretches from Sao Paolo to Irkutsk to Montréal to Nagoya to Komsomolsk has never been so strong and diverse. Ensuring airliners enter into service smoothly, with no major issues and minimal rework in early airframes, is a key test of an airliner’s success and post-launch order book — and Airbus focused honestly on the travails of its two latest aircraft at its Innovation Days media event here this week.

Until recently, the aviation industry had not covered itself in EIS glory in the past decade or two. The A380’s wing rib problem, Boeing 787’s well-documented battery issues, the Airbus A350’s cabin interiors delivery delays, and the A320neo’s Pratt & Whitney engine startup problem have all contributed to concerns about early deliverability for Boeing and Airbus.

The latest batch of regional airliners, however, have seen more issues, most notably the Mitsubishi MRJ wing issue, the significant delays to the CSeries, and the questions about whether the Irkut MC-21 will deliver on its many promises. Can the regionals learn from the mainliners here?

Airbus has always claimed that its relatively slow ramp-up plans for the A350 allowed it to prepare for a reasonable amount of programme slippage. While this brought the airframer a fair amount of criticism from the markets, in the 20/20 hindsight of the cabin interiors delivery débacle, Airbus’ move would seem prescient, even prophetic.

Airbus CEO Fabrice Bregier: "I was pissed off." Regarding supplier shortages for seats and lavatories slowing A350 ramp-up. #AirbusID16

This is particularly true given the material and ongoing failures by the overconsolidated cabin interiors industry to deliver seats, lavatories and other monuments on time and to specification, most recently for the A350 but also, for example, for American Airlines’ Boeing 787.

"It is a bit silly to be blocked on a few seats or lavatories but it is our job to make it work." -Bregier re A350 delays #AirbusID16 #PaxEx

Similarly, while the Airbus facilities at Toulouse and Hamburg are increasingly covered with what chief operating officer Tom Williams called “gliders”, sans Pratt & Whitney PW1000G engines, the fact is that the airframes themselves are built to spec and ready to receive their powerplants later in 2016 as soon as they become available. Multiple engine options also reduce the single-supplier risk that scuppered the Lockheed L-1011 back in the day.

A320neo: “Magically these gliders, in the second half of the year, will get their engines,” says Airbus’ Fabrice Brégier. #AirbusID16

(That the A320neo flight test program raised an issue with the larger engines warming the hydraulic systems to a slightly higher temperature, thus raising questions from previously planned launch customer Qatar Airways, is both dismissed by Airbus in that Doha has not reached the 50°C threshold in recorded history, and solved by the airframer in that it will raise the threshold to 55°C.)

Yet there are so many engine-less A320neo family aircraft at the Hamburg Finkenwerder factory that one journalist at the Airbus Innovation Days wondered whether they had overflown a second Hamburg airport dedicated to low-cost carriers.

But this does not appear to be 787 “terrible teens” issue, where significant rework and overweight issues on early Dreamliners meant that numerous airframes have sat in Seattle awaiting customers. Ethiopian will take several at a substantial discount, largely for regional use, and Air Austral just received its first example.

Overall, despite a positive plan to solve the issues on the A350 and the A320neo, the tone from Airbus senior management about the EIS issues for these two aircraft hit a resigned fatalistic note. Have we reached the point of diminishing returns on achieving a smooth entry into service? Are there by default always going to be a series of issues that are inevitable given the lack of vertical integration in the industry?

The story of the relatively low-risk Airbus A330neo certification — due “at the end of 2017” according to Airbus President & CEO Fabrice Brégier — will show whether or not the airliner industry (or at least its European side) has made significant progress getting aircraft ready for service. 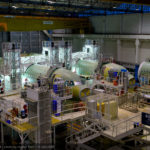 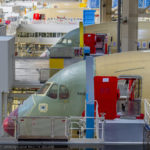 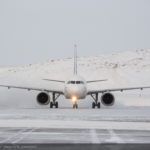 There are still many engine-less A320neo family aircraft in Hamburg. Image: Airbus 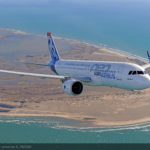 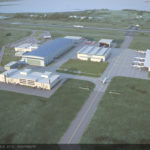 RGN Premium: On supplier network, Bregier is not a happy camper