When passengers access their own on-demand streaming subscriptions onboard aircraft, they consume a lot of bandwidth. Some airlines simply don’t permit the practice. But for those that do, bandwidth can be costly — either for the operator that shoulders the cost, the sponsor that has paid for the opportunity, or the end user who pays out-of-pocket for the session (or indeed some combination thereof). That is why French company Airmont has devised a way to support inflight streaming with radically less data consumption.

Using patented data compression technology that requires a simple retrofit of existing cabin wireless hardware, over 50 simultaneous streams can be supported per server at a rate of 550 Kbps per stream, says Airmont, which bases this rate on the assumption that a Ku-band or Ka-band satellite connection or air-to-ground IFC is onboard.

At a 550 Kbps rate, the optimised stream is consistent, of “good quality” 480p standard definition, and avoids lagging and freezing, according to the firm, which tapped UK-based Cobham for the advanced commercial aircraft server that contains its streaming optimization technology.

Airmont claims, for example, that streaming Netflix through its solution consumes 50% less bandwidth than through a standard Internet connection, allowing for other Internet activity such as messaging or emails. 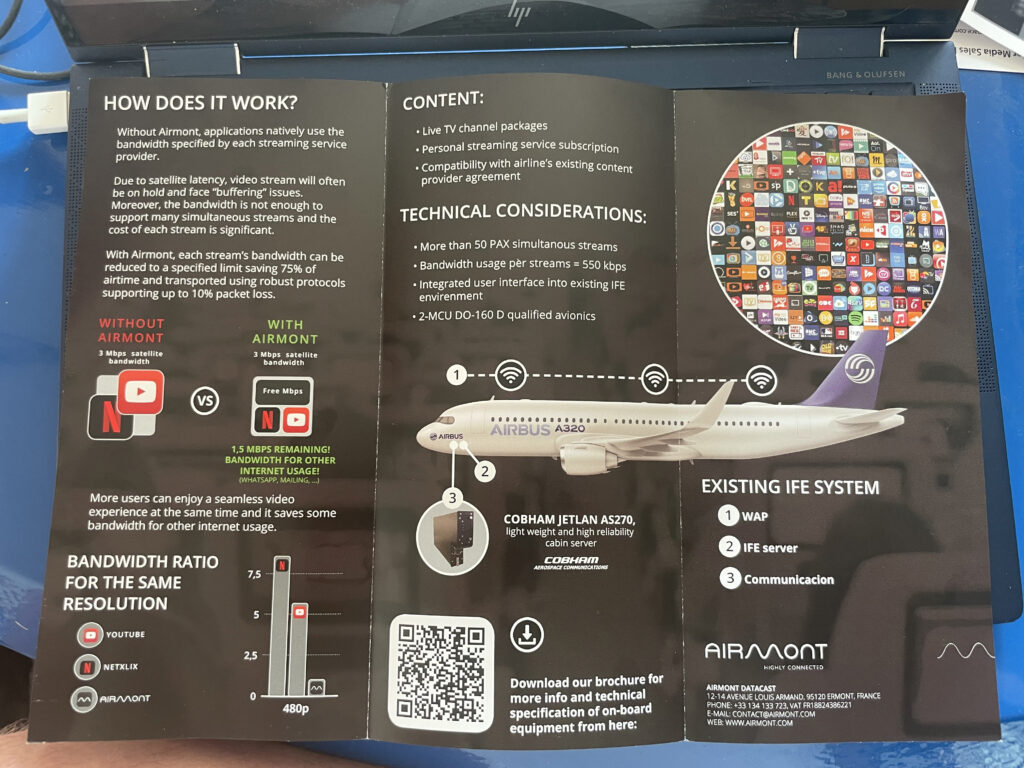 Without Airmont, applications natively use the bandwidth specified by each streaming service provider. With Airmont, each stream’s bandwidth can be reduced to the specified limit. Photo of Airmont brochure credited to Fintan Horan-Stear

But the technology can support a range of different speeds and ergo, streaming quality — from 120 Kbps up to 2 Mbps per stream, with the latter capable of supporting higher definition content streams.

By allowing airlines to specify their own requirements, it is possible to differentiate the experience for different cabins or different Internet packages. For example, a premium carrier may wish to set a streaming rate in business class that is above the baseline recommended rate. Similarly, airlines could offer upgrade packages to drive ancillary revenue.

While the technology sounds ambitious, it is borne from experience. Jean-Francois Gault, the founder and executive chairman of Airmont, has built a career in aviation connectivity. He co-founded routing software provider Satcom1, which focused on optimizing IFC and is now owned by Honeywell. And Airmont’s technology has already made headway in the business aviation community, as well as onboard yachts.

Speaking to Runway Girl Network at the Aircraft Interiors Expo in Hamburg, Gault said, “We believe that what people want to watch is in their phones.” Moreover, he added, “The future is streaming.”

Nevertheless, he doesn’t see Airmont as a replacement for traditional IFE. “This is designed to be a complementary experience,” rather than something that makes seatback screens obsolete. “We do not see ourselves in competition with anyone.”

Airmont also allows for multiple linear TV channels to be offered in-flight — whereby passengers can watch a TV program on the channel it’s presented on at its scheduled time. The company revealed that it already has an agreement in place with France TV.

Gault also suggested that passengers will be able to effectively cast their own streaming services from their phone to the aircraft’s IFE screens in the same way Apple TV and Chromecast work on the ground. He demonstrated this functionality at AIX with France’s Molotov TV service, which provides live, catch-up and on-demand programs from publishers and television channels in a single interface. Outside of Airmont’s solution, no additional applications were required, though the system can also be integrated into airline apps as well.