Streaming Netflix on a business jet via the latest satellite connectivity links is entirely possible, but it doesn’t necessarily make for cheap moviegoing. Add in the simultaneous broadband Internet requirements of other passengers on board and there’s a chance that someone will need to compromise or accept a reduced standard. Watching movies at a reduced quality is hardly an acceptable compromise if you’re paying big bucks for said connectivity service.

Enter Airmont, a French company that provides a wide range of communication platforms for land, sea and air. Using patented encryption technology, the company’s Airmont-Cast solution is able to compress and stream media – Netflix, Twitch, YouTube, TV applications, etc – to Android, iOS or Windows 10 devices while consuming only a portion of the bandwidth available from the jet’s standard Internet pipe.

During the recent European Business Aviation Convention and Exhibition (EBACE) in Geneva, Airmont executive chairman & founder Jean-François Gault explained how Airmont is seeking to usher in a revolution in how private jet customers view streaming content with Airmont-Cast.

“We offer an over-the-top service, complementary to whatever IFE and connectivity is already available on the aircraft. It enables customers to access streaming video content from their phone or other device in a way that’s compatible with the bandwidth capability of [the] plane’s satellite links. The way we do that is by delivering their content in a highly compressed form, but maintaining quality when they view it,” said Gault.

By using a fraction of the bandwidth that would normally be consumed, operators can enable multiple users on board and reduce costs, he said, noting that Airmont-Cast can also make reliable streaming available to those with smaller bandwidth packages (to wit, several years ago RGN observed Airmont’s compression and aggregation technology support live TV streams via L-band links).

At this year’s EBACE, Gault provided a remarkable demonstration of the Airmont-Cast solution. First, he streamed a news broadcast at 180 Kbps, and achieved more than acceptable quality. He then did the same thing with a steadily increasing amount of bandwidth. But while the quality improved as bandwidth increased, the change was barely sufficient to warrant the extra bandwidth and, therefore, expense. 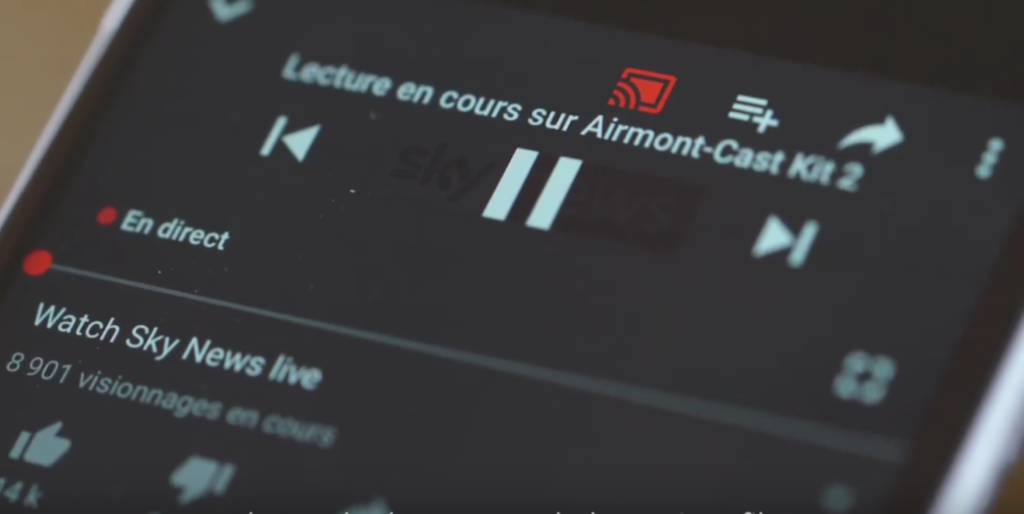 Throughout the demonstration, Gault accessed Airmont-Cast through a ‘remote control’ on his iPhone, emphasizing that the solution employs the native cast compatibility of most mobile devices. There’s no Airmont-Cast app to download. Image: Airmont

By now, the system’s impressive quality and cost-saving potential was obvious to your writer… how it worked, less so. Gault explained that individual customers subscribe to Airmont-Cast, accessing their subscription through a smartphone, for example, while using the WiFi aboard a business aircraft. When content is chosen, the request passes through the Airmont-Cast Gateway via the satellite link to a server, part of Airmont’s ground infrastructure.

The content then streams through a regular ground-based broadband link, via an encoder, which compresses it, and back to the aircraft via the satellite connectivity pipe. On reaching the aircraft, an Airmont-Cast decoder makes the content available for viewing on any monitor, mounted or in the palm of your hand.

Two very small boxes are all that’s required on board – the Gateway and the decoder. Right now, these are standalone items, but Gault expects more versatile, permanently installed equipment to become available before the end of the year.

The Airmont-Cast subscription will remain with individual customers, but aircraft operators will have the option of offering compatibility as part of their standard service.

“The connectivity service providers could argue that we’re encouraging people to spend less on their connectivity by using reduced bandwidth,” Gault noted, “but we believe we’re helping more people enjoy different content on the same aircraft simultaneously, each of them using less bandwidth than if they streamed by conventional means, and that has to be good for everyone.”

Even business jet operators are paying attention to the cost of streaming media via satellite connectivity. Image: Airmont

SpiceJet gets down to business on former Jet Airways 737NG twinjets