Airbus and Safran-GE joint venture CFM will flight test a direct hydrogen combustion engine aboard Airbus’ A380 MSN1 test platform, the companies announced today, as part of a ‘ZEROe’ testbed programme that includes a planned first flight date by the end of 2026.

The engine will be attached to the left-hand side of the top rear fuselage of the four-engined A380, rather than having one of the underwing engines swapped out, along the lines of the way that engines are attached to the Honeywell 757 testbed or the side of the Rolls-Royce test 747.

Crucially, it will be a traditional ducted turbofan rather than the unducted RISE concept CFM revealed in June 2021, with GE Aviation vice president and general manager of engineering Mohamed Ali confirming that it will be a modified GE Passport engine, scaled down from LEAP, and which powers the Bombardier Global 7500 business jet.

[Press Release] CFM and @Airbus to pioneer #hydrogen combustion technology by signing an agreement to work together on a hydrogen demonstration program that will take flight around the middle of this decade. #ClearAmbition https://t.co/l2qLc3hhyc@SafranEngines @GEAviation pic.twitter.com/1gfMXirffz

Airbus chief technology officer Sabine Klauke confirmed that the structural modifications to the A380 could potentially be used for a later ducted turbofan demonstrator.

Inside the A380, four 100kg liquid hydrogen tanks will be installed towards the rear of the aircraft. Early renderings and information from Klauke at the event suggest this might well be where Korean Air has its onboard duty-free shopping showcase. 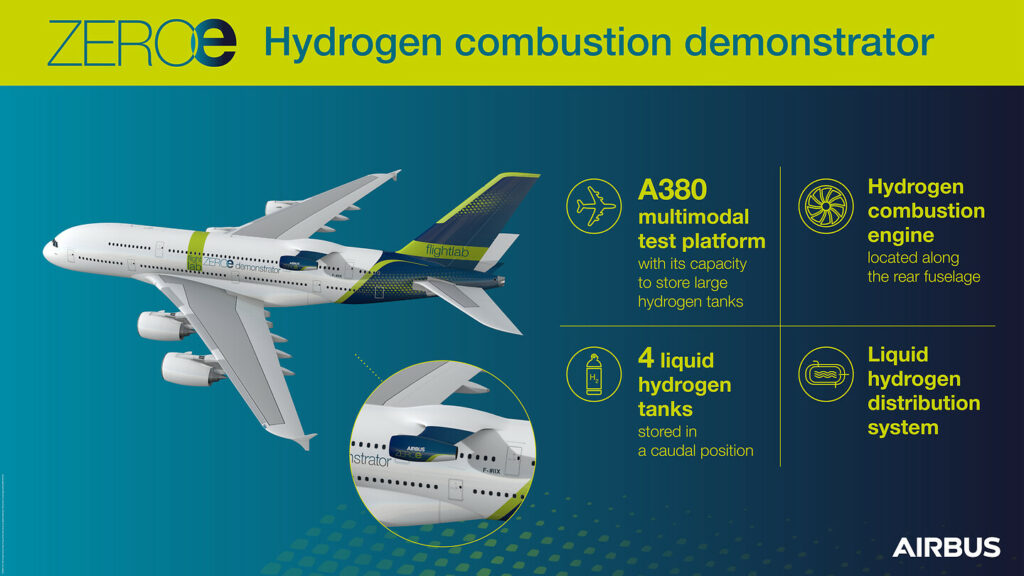 The GE Passport engine will be attached to the side of the A380’s fuselage. Image: Airbus

Explained Klauke, “the position [of the engine] is here to really well measure… the atmosphere as well as the overall system, so we have a really good integration between the tanks and the engine… and we also want to measure everything that is happening in the atmosphere.”

The testbed will include a full sensor array around the engine as part of the flight test programme. Flight deck modifications will include a separate throttle for the hydrogen engine, and a specific display showing its performance to them as well as to test engineers onboard and on the ground.

A separate fuel distribution system will then fuel the single engine, which will include both a cryogenic fuel delivery system, including new fuel pumps, piping, seals and other elements.

Significant engineering advances will also need to take account of the higher temperatures and faster burn of hydrogen combustion compared with jet fuel. The choice of material for the tank — metallic or carbon fibre reinforced plastic — is also yet to be chosen, with Klauke confirming these will be contained in a separate hermetically sealed container for safety.

Klauke also confirmed that both the kind of propulsion and the style of airframe for the eventual ZEROe concept demonstrator will be selected “in a couple of years from now”, linked to the various “technology bricks” including options like fuel cell power.

Responding to a question from Runway Girl Network as to what the partnership foresees as the biggest challenges, Airbus Americas chairman and CEO Jeffrey Knittel said: “this has got to be a holistic solution, hence the partnership. Sabine [Klauke] and I have both talked about the supply chain… airports… airlines. The biggest challenge is working through the technological bricks, making sure the entire ecosystem understands the opportunities that we’re looking at, the challenges that we’re facing, and bringing the resources necessary to solve those problems together. This is a step, a concrete step in that direction.”

Safran president and chief executive officer Gaël Méheust elaborated in response to RGN’s question that “for us, the challenge is really technical. We’re going to start with an engine that runs with jet fuel, and the goal is to have this engine be operated with hydrogen.”

Méheust highlighted “transforming the liquid hydrogen into a gas that we can burn, into a new design combustion chamber with a redesigned fuel distribution system, and all the controls of the engines… there is a lot of work to be done, but it doesn’t seem to be insurmountable.