“These new meals demonstrate our commitment to prioritizing sustainability and openness while still providing an unrivaled passenger experience,” said Junko Yazawa, Senior Vice President overseeing Customer Experience Management & Planning. “The meals include healthy, sustainably sourced ingredients and are prepared with the same degree of precision and dedication as all of our inflight cuisine.”

Passengers traveling in business class will be able to select a healthy rice bowl topped with a plant-based cutlet. In addition to being meat-free, this sustainable meal contains less fat and fewer calories, presenting a satisfying option for health conscious travelers.

ANA has long been recognized for the excellence of its inflight dining options, and recently launched a series of healthy meals in collaboration with its elite “THE CONNOISSEURS” culinary partners. Made up of distinguished chefs and sommeliers from Japan and abroad, THE CONNOISSEURS work to ensure that ANA is able to offer a diverse set of culinary options that are prepared with the finest ingredients and the highest possible attention to detail.

At ANA Catering Service, approximately 248 tons of food waste and 28 tons of oil is collected every year (as of 2019), and since 2008 the ANA Group has recycled 100% of the waste into compost and animal feed. Moving forward, ANA will utilize more food products produced through this composting operation in keeping with its commitment to the goals of ANA Future Promise. 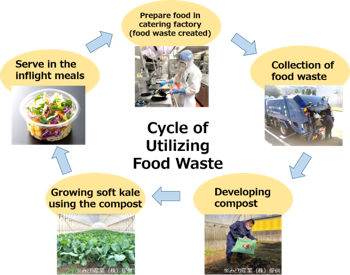 The decision to offer numerous inflight dining options and eco-friendly meals are part of the ANA Future Promise initiative which originally began as a way to place sustainability and social good at the center of the airline’s response to the disruption caused by COVID-19. ANA has since expanded the scope of the initiative and in addition to prioritizing sustainability, ANA Future Promise now places an emphasis on ESG, hygiene, and openness. The initiative will improve the overall consumer experience while also placing ANA in a position to achieve the ambitious Sustainable Development Goals that the airline has long been committed to. By uniting a range of programs under a single banner, ANA employees will be empowered as they work together to achieve the 2030 and 2050 sustainability benchmarks.

Founded in 1952 with just two helicopters, All Nippon Airways has grown to become the largest airline in Japan. ANA HOLDINGS Inc. was established in 2013 as the largest airline group holding company in Japan, comprising 71 companies including ANA and Peach Aviation, the leading LCC in Japan.

ANA is a launch customer and the largest operator of the Boeing 787 Dreamliner, making ANA HD the biggest Dreamliner owner in the world. A member of Star Alliance since 1999, ANA has joint venture agreements with United Airlines, Lufthansa German Airlines, Swiss International Airlines, Austrian Airlines and Brussels Airlines – giving it a truly global presence.

The airline’s legacy of superior service has helped it earn SKYTRAX’s respected 5-Star rating every year since 2013, with ANA being the only Japanese airline to win this prestigious designation for eight consecutive years. ANA also has been recognized by Air Transport World as “Airline of the Year” three times (2007, 2013 and 2018); it is one of only a select few airlines to win this prominent award multiple times.

In 2021, ANA was awarded the 5-star COVID-19 safety rating by SKYTRAX, recognizing the airline’s initiatives to provide a safe, clean and hygienic environment at airports and aboard aircraft, embodied in the ANA Care Promise.

All images credited to ANA

Press Release: Caeli Nova concludes Series A round of financing