British Airways customers will be welcomed back on board with new ‘Best of British Menus’ with the September edition featuring a traditional British Roast dinner.

The airline’s roast, which will be available in First and Club World, will provide customers flying across the globe a taste of a quintessentially British dish.

The chefs will also be creating themed deserts on its monthly menus, with September’s theme being ‘All Things Botanical’ including an elderflower and white chocolate dessert with compressed apple and elderflower sorbet.

In October, customers can expect to see another great traditional roast featuring chicken, as well as lamb hot pot and Welsh rarebit with chutney. The new dessert menu will celebrate the British apple season with treats such as apple mousse, with granny smith sorbet or British apple compote with vanilla custard and crumble.

Other classic dishes that will feature on menus will include gastro pub classics such as chicken pie with mash, pork pie with piccalilli, shepherd’s pie, sausage and mash, as well as chicken bacon leek and mushroom pie. The menu also features vegetarian options using British produce, such as butternut squash gnocchi with blue cheese sauce and wild cavolo nero, and handmade ricotta mezzaluna with truffle cream and grilled asparagus. 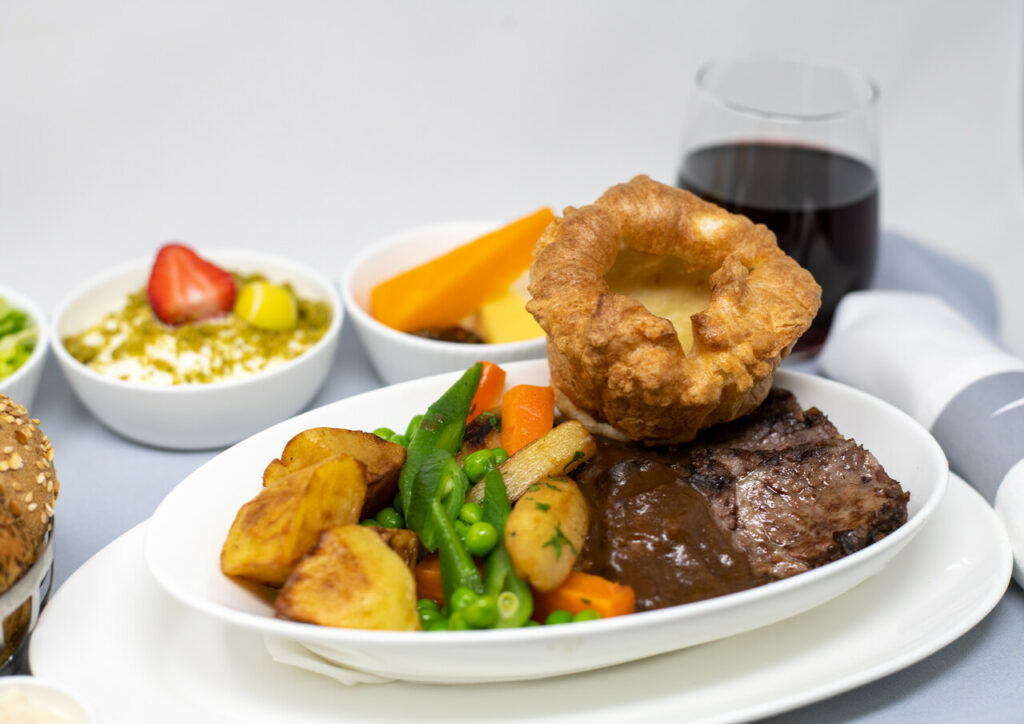 Sajida Ismail, Head of Inflight said: “As we look ahead to welcoming back customers who may not have flown for a while, we wanted to mark the occasion by offering a really special menu that celebrates the best of Britain.

Working with our catering partners, DO & CO and Newrest, we have created dishes using the best of British ingredients while they are in season. We are particularly excited to be offering a roast dinner on board. We know that Yorkshire puddings and crispy roast potatoes can be difficult to re-create at altitude, but our chefs have been working to make it happen, because we know that every British roast dinner should have them!”

The introduction of the new menus follows the introduction of other British Airways food and drink improvements for short-haul flights in its Euro Traveller (economy) cabin. The improvements include the introduction of ‘Buy Before you Fly’ menus including a selection of gourmet food from Michelin-starred chef Tom Kerridge, and the recent introduction of digital technology to ‘Buy on Board’ which will allow customers to order to their seat through a mobile device. The airline has also re-introduced free water and snacks on shorter flights in the Euro Traveller cabin. The changes come as part of the airline’s pledge to reduce food waste as part of its broader Sustainability commitments.

Customers booking with British Airways can do so with absolute confidence, thanks to the airline’s flexible booking policy. Customers are able to exchange their booking for a voucher or move their dates without incurring a change fee if their plans change. British Airways Holidays’ customers also have access to a range of additional flexible booking options, as part of the company’s Customer Promise, including securing a holiday with a deposit from just £60 per person and lounge access for those spending over £1,500 per person.

All long-haul British Airways flights include a food and beverage service, across all cabins.  Customers can enjoy a starter, main and dessert, with a choice of hot, cold and alcoholic drinks.

British Airways has introduced a number of measures at the airport and on board to look after the safety and wellbeing of its customers and crew. These include social distancing measures, the wearing of face masks and hand sanitiser stations. Prior to travel customers will also receive details of how they can prepare for their next flight.

The airline is cleaning all key surfaces including seats, screens, seat buckles and tray tables after every flight and each aircraft is completely cleaned from nose to tail every day. The air on all British Airways flights is fully recycled once every two to three minutes through HEPA filters, which remove microscopic bacteria and virus clusters with over 99.9% efficiency, equivalent to hospital operating theatre standards.