Space tourism — and the brand new commercial passenger experience it will offer — took a giant step towards becoming a reality on 11 July, when Virgin Galactic successfully reached the edge of space with a full crew aboard its rocket-powered SpaceShipTwo VSS Unity spaceplane.

This was the 22nd test flight of VSS Unity and the first test flight with a full crew in the cabin, including Virgin Galactic founder Sir Richard Branson.

VSS Unity achieved a speed of Mach 3 after being released from the carrier mothership, VMS Eve. The vehicle reached an altitude of 53.5 miles — and the crew experienced weightlessness — before it glided smoothly and safely to a runway landing at Spaceport America in New Mexico.

“The crew fulfilled a number of test objectives related to the cabin and customer experience, including evaluating the commercial customer cabin, the views of Earth from space, the conditions for conducting research and the effectiveness of the five-day pre-flight training program at Spaceport America,” said Virgin Galactic in a statement.

But what exactly should passengers expect aboard the company’s six-passenger commercial suborbital spaceflights?

On its website, Virgin Galactic describes the #PaxEx thusly:

Our launches begin with a smooth runway takeoff before our spaceship and mothership climb together to just below 50,000 feet. Once past the thickest layers of atmosphere, our ships don’t require huge amounts of fuel to reach space. We call this energy-efficient, flight-like ride an Air-Launch.

Next, our pilot releases spaceship from mothership. The spaceship’s rocket ignites, sending the craft up to space a little over Mach 3. The colors outside the window change from blue to indigo to midnight black as you reach space and the rocket motor switches off.

Nearly 300,000 feet above Earth, the cabin becomes your playground to unbuckle and experience weightlessness. The planet peers back at you through the ship’s 17 windows as you see home for the first time. 16 cameras throughout the cabin record every moment of the experience in HD.

Preparing for re-entry, the ship’s wings raise up 60 degrees. After the ship descends to thick atmosphere, the wings are lowered and the pilot glides the spaceship to a smooth landing back on the same runway you took off from. And just like that, you’re home.

Following Sunday’s historic flight, Branson said: “I have dreamt about this moment since I was a child, but nothing could have prepared me for the view of Earth from space. We are at the vanguard of a new space age.

“As Virgin’s founder, I was honored to test the incredible customer experience as part of this remarkable crew of mission specialists and now astronauts. I can’t wait to share this experience with aspiring astronauts around the world.” 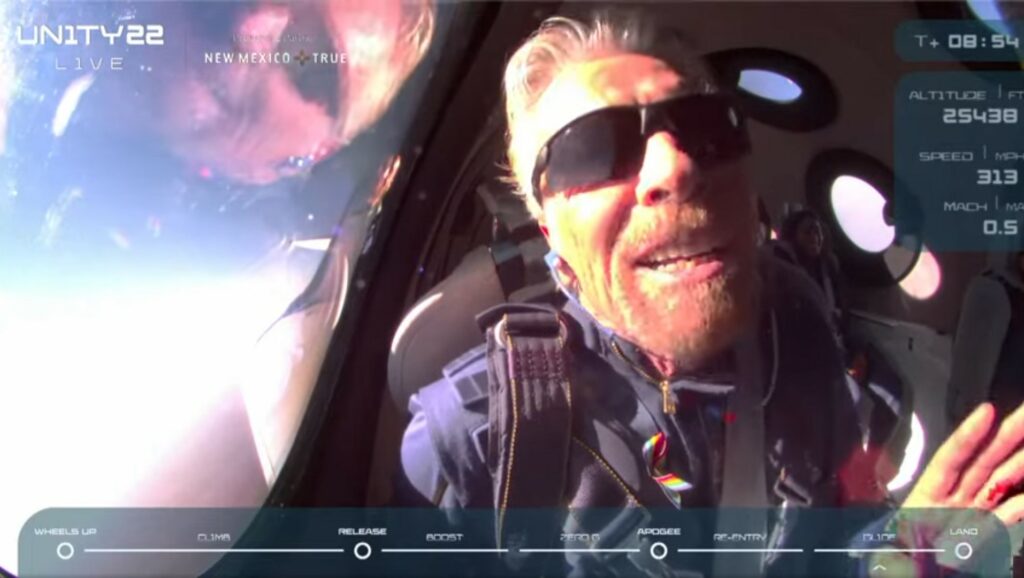 Richard Branson talking to cameras as he enters the edge of space. Image: Virgin Galactic

Some journalists and space enthusiasts pointed out that American aerospace engineer and entrepreneur Burt Rutan, who played a pivotal role in the design of the spacecraft technology, also deserves some of the credit.

One person that deserves a little credit today is Burt Rutan. The SpaceShipTwo configuration was his idea. Its feathering technique creates what Rutan called a "carefree re-entry." Rutan's friend, X-15 pilot Michael Adams, lost control during re-entry and died in 1966. https://t.co/Sy1gfE1hoh

The American Institute of Aeronautics and Astronautics (AIAA), which is the world’s largest aerospace technical society, lauded the successful Unity 22 mission, saying it marks “a major step forward in humanity’s quest to extend the human neighborhood beyond planet Earth. Virgin Galactic is helping move us closer to the day when space travel is widely accessible to people everywhere.”

The association said it wanted to especially congratulate Unity 22 mission specialist, VP of government affairs and research operations Sirisha Bandla on her part in the flight.

ASTRONAUT SIRISHA BANDLA — Welcome back to Earth 004 — those wings look good on you!!!!! So many tears today. Congrats to @SirishaBandla , @virgingalactic and the entire #Unity22 crew! pic.twitter.com/CsXAl5Fl6i

In addition to Branson and Bandla, the mission specialists in the cabin were Beth Moses, chief astronaut instructor and Colin Bennett, lead flight operations engineer. The VSS Unity pilots were Dave Mackay and Michael Masucci, while Kelly Latimer and CJ Sturckow piloted the VMS Eve.