The UK is in a troubling and worsening COVID-19 situation, with its advanced vaccination programme going some way to mitigate the deadliest effects of one of the world’s worst per capita case rates.

At the same time, the UK government proceeds with plans to remove most if not all domestic restrictions in England on 19 July, leaving those who have not been eligible or able to be fully vaccinated (some 35% of the over-18 population, and the vast majority of the under-18s) unprotected against the Delta strain.

Arriving in England in late June from France via the Eurotunnel cross-channel car train was thus already something of an unsettling experience for your author, and certainly more so than similar trips within the last year.

The hard-won experience from those previous visits produced a streamlined and less outrageously costly, if still frustrating, experience with postal PCR testing.

For Amber list countries such as France, the UK required then — and, for anyone not fully vaccinated by UK authorities, will continue to require — a PCR test to be sent off via mail on days 2 and 8 of the ten-day quarantine.

The unregulated cost of these tests from private providers (NHS tests remain banned for travellers) remains expensive, to the order of £200 (some US$275) or more, and few to none at even this eyewatering pricing range — for an idea of the profiteering here, France plans to introduce charges of €49/£42/$58 for testing — give guarantees on test turnaround time.

Your author being familiar with the situation, a tip-off from UK consumer organisation Which? revealed a provider of the two tests for £99 (just over $135). Yet even here the disconnect between government regulations and private health provision broke down.

The long two-day drive required an overnight stop in the UK, but there was no way that the provider could send it for arrival at the overnight stop hotel to enable it to be delivered there rather than, potentially, a delivery being attempted at destination prior to your author’s arrival.

The postal testing service was also slow to the point of incredulity. The day 2 test result took until very late in the night of day 5, while the 8 test result took until day 12. Knowing this, your author secured an in-person £85 (about $117) day 5 test from the pharmacy chain Boots, which is couriered in batches to its labs and was back within 36 hours. 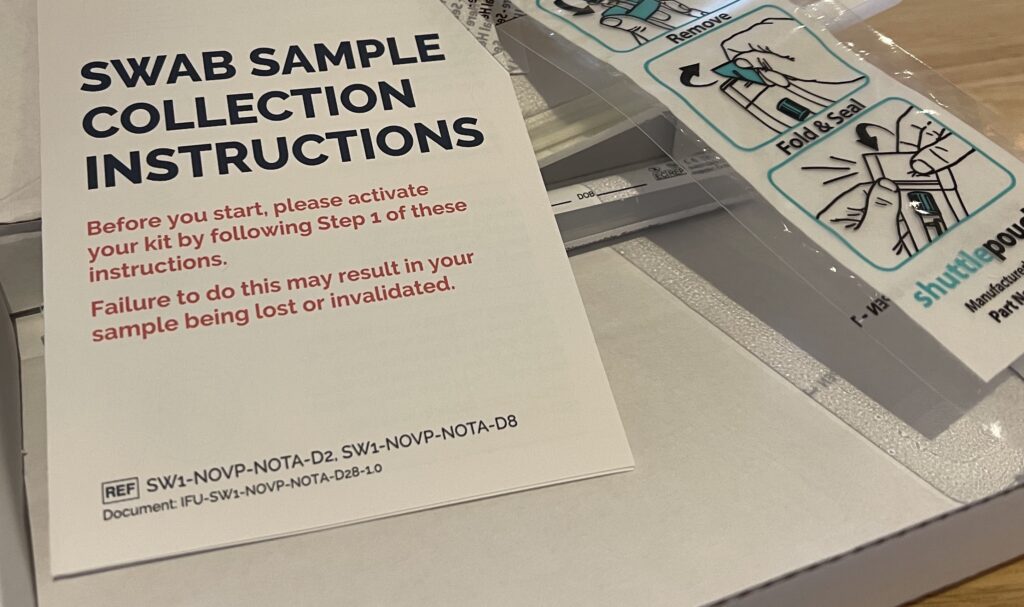 Yet beyond the testing, the process of crossing the Channel via the Eurotunnel auto-train itself was surprisingly disorganised, with passengers funnelled into unmanaged queues and processed by unmasked staff.

On arrival at the Calais departure terminal, only three of the fourteen checkin lane booths were staffed, with passengers being directed to park up and go inside the terminal building. 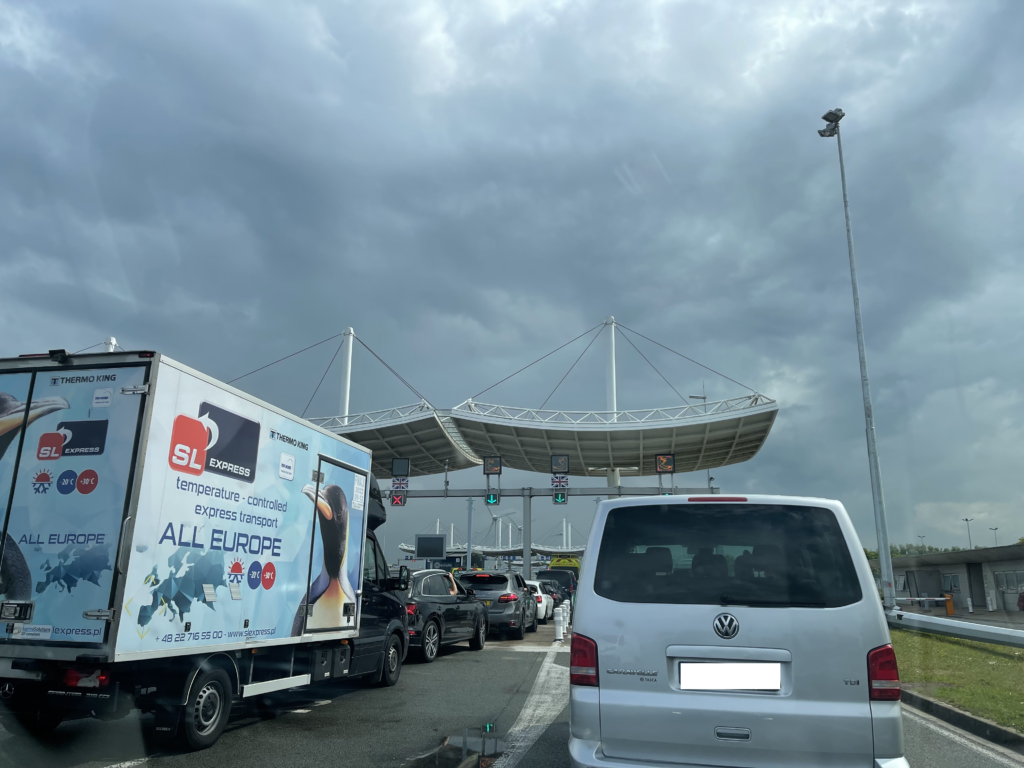 Only three booths were open, directing every passenger into the main terminal building. Image: John Walton

Both were unmanaged group queues, waiting for three working desks in the two small rooms with no open windows. In the second room, staff were not wearing masks — at a time when this was strictly legally mandatory in France and UK case numbers were already skyrocketing.

It’s hard to see how having these six staffers in the terminal, potentially exposing passengers and each other to COVID-19, would be any efficiency gain compared with staffing six of the eleven unused checkin lane booths — where passengers could remain safely isolated in their cars. This would be the normal procedure, and indeed had been the pandemic procedure the previous three times this journalist has traversed the Channel with Eurotunnel in the last year. 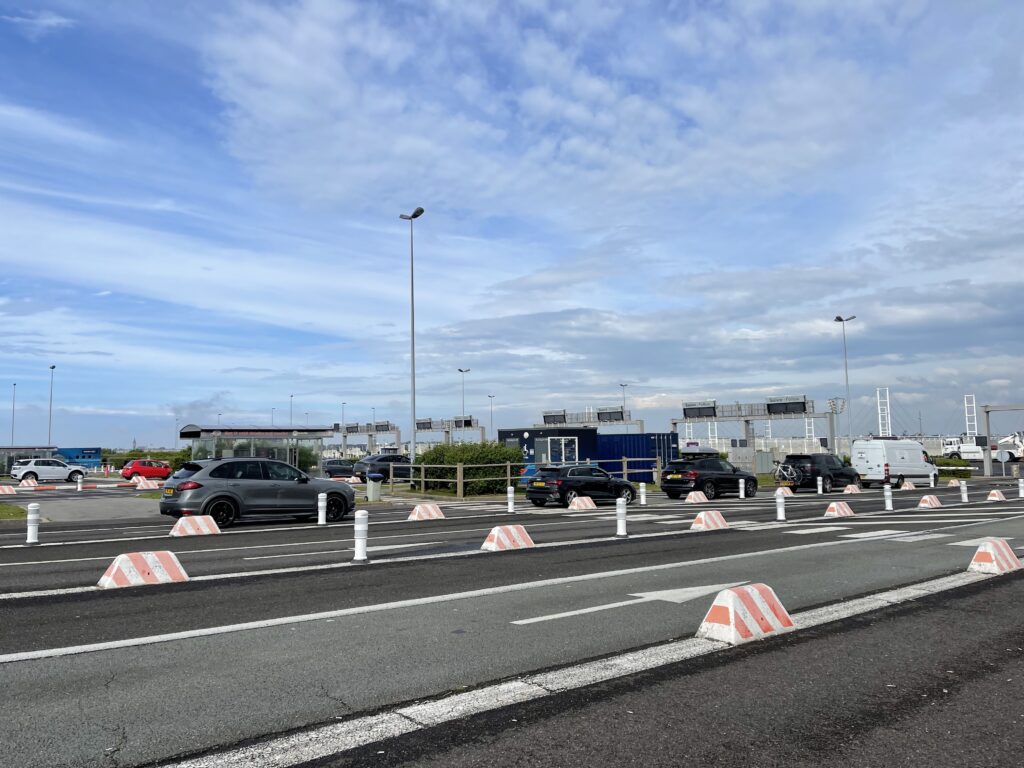 With travel volumes still very low, it was baffling that the processing could not be done at the booths. Image: John Walton

At a time where the UK’s case rate continues to climb at a stratospheric rate, with warnings about the capacity to test hundreds of thousands of new cases a day, it is perhaps the least of things to be contemplating the issues faced by incoming travellers.

But the apparent squandering of a world-leading vaccination drive by the country’s National Health Service is symptomatic — figuratively and, unfortunately, literally — of the way that UK political decisionmakers continue to operate during this pandemic. Unless matters change substantially, the prospects for the travel industry operating to and from the UK in the near future seem dimmer than ever.

Prepare for forms and more forms when flying Europe-US