The United Kingdom is in an enviable epidemiological position at present: emerging from a months-long lockdown, with its National Health Service executing an admirable vaccination programme, its citizens are beginning to look at resuming some international travel, even while the “UK variant” of the SARS-CoV-2 virus that causes COVID-19 is posing greater and greater problems in many other countries.

Yet as the requirements for testing before, during and on return from travel start to emerge — as the Report of the Global Travel Taskforce [PDF], staffed by over ten government entities, is released — the practical picture for travellers is still opaque.

It seems there will be a green/amber/red traffic light categorisation of countries according to risk, where green countries will require less testing and quarantine on return than amber countries, while red countries will require managed hotel quarantine. The system will be launched from 17 May at the earliest, but the full criteria have not been announced, making planning complicated at best.

This is, in some ways, understandable: the situation is dynamic, and it would not be advisable to give firm dates that then need to be changed.

But it is the private for-profit testing requirements, and indeed costs, that have been causing consternation in the UK, where the National Health Service (NHS) provides healthcare free at the point of use.

As your author has been experiencing over the past ten days after travelling to the UK, in contrast to the NHS’s excellent record in the vaccination campaign, these for-profit tests are uncoordinated, and eyewateringly expensive.

Runway Girl Network spoke with Rory Boland, travel editor at UK consumer champion Which?, who explains that “most travellers understand that health comes first and testing is required, but the current price of tests in the UK is very expensive, more than in many other countries. If the government wants to open up travel to everybody rather than just those who can afford those prices, it needs to tackle the issue.”

The cost of the mandated for-profit testing is astronomical

Your author arrived in the UK nine days ago at the time of writing, under the conditions that would, at present, be an “amber” country, and was therefore required to present:

As a French resident with a Carte Vitale health service card, the pre-departure test in France was free, and the local testing centre said that the free tests were not only for residents. Which? estimates that this would otherwise cost €54, some US$65.

(The UK requires that the tests be in English, French or Spanish, which will be an added complexity for many countries. That the UK border guard in France had trouble translating “Absence de détection du SARS-COV2” on the French test printout was an early sign that even this part of the system is not as robust as it should be.)

(Your author also elected to pay extra for the “test-to-release” option on day 5, for a further £97 or $135, not least because the self-isolation quarantine is a stay-indoors order with no exemption for exercise or other reasons to be outside until the return of the day 8 test. Your author has, at the end of day 9, not yet received the results of the day 8 test. Indeed, if this were to fall over a weekend or holiday, the mailing time could add one or two days to the isolation time.)

Up to $500 per person may not be a dealbreaker for some business travel, as indeed it was not in your author’s case. And some airlines and airports are subsidising some kinds of tests in some cases.

But for a family looking to visit relatives in a “safe” country overseas who they might not have seen in over a year, or for people of average means simply wanting to take a holiday in a warmer climate, the pricetag to cover four family members might be simply out of the question, even before one takes into account the need for all travellers at present (and many travellers under the new system) to self-isolate. Not everybody has the kind of job or the size of home that means this is feasible.

There are real questions of equity here, and not just of means — but of geographical location, particularly around the 72-hour window for PCR testing, which creates a “postcode lottery” problem with the mostly postal testing in place.

Your author’s UK base is with family in a rural area, and despite spending hours of research on the UK government site, there are no in-person private testing sites within the same county, and indeed it is unclear where the nearest ones are — perhaps a two-hour drive to the nearest large city, Birmingham? Effective testing, delivered on time cannot just be for those who happen to live close enough to a for-profit testing site.

The private testing is uncoordinated and sometimes even undelivered

For the required day 2 and 8 testing, the UK government simply lists providers alphabetically with their region of the country (“South East”, or more often “Nationwide”) and the price of testing. With nearly 100 providers, the lack of location information — which surely must be held — is as frustrating as the price range, which runs an unexplained (indeed, inexplicable) gamut from £169–£549.

The day 5 testing providers, meanwhile, are even worse: no pricing, and at the time of writing the 440 separate providers are presented alphabetically in a way that resembles nothing so much as what the yellow pages for taxi companies or plumbers used to look like: A1 Cars, 007 Plumbing, AAA Taxis.

Transport Secretary Grant Shapps suggests that “more competition in the marketplace” might help. But it is hard to see how adding another 440 providers to an entirely uncoordinated list will help.

Your author spent $500 for three tests, from the same company. The day 2 and 8 tests were to be sent to one test lab, and day 5 to another. The instructions were inconsistent between the tests. Only the day 5 had illustrated diagrams.

The UK National Health Service, which has done such an exemplary job with the rollout of the vaccination programme, has its own set of illustrations that it sends out with tests — your author knows a volunteer on the AstraZeneca vaccine test who receives them weekly. These are substantially more detailed than the ones your author received, and likely to result in a much more reliable test. 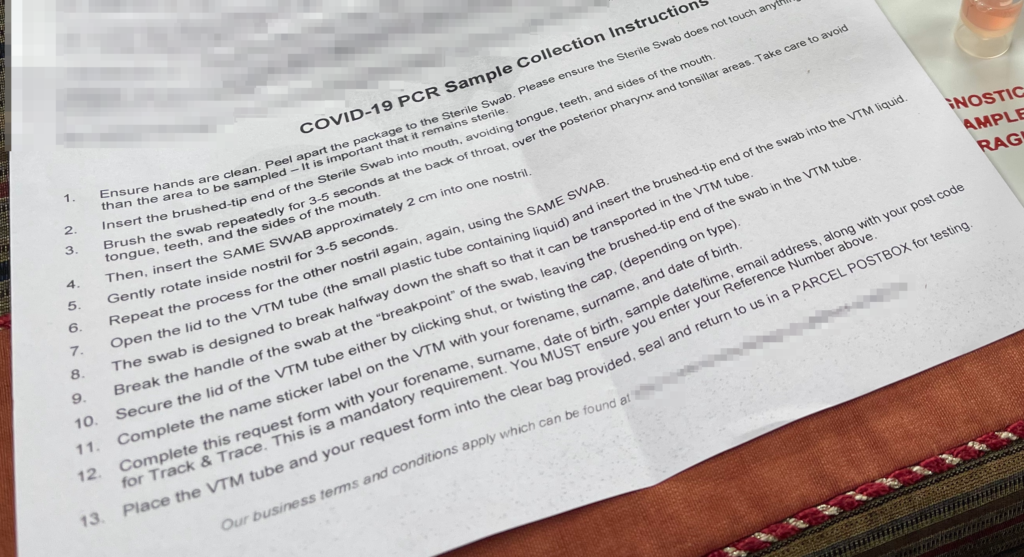 Perhaps explaining where the posterior pharynx and tonsillar areas are in some way might be useful. Image: John Walton

Moreover, the posting procedures were different for the day 5 test, and were substantially slower. The test was used on 5 April, mailed first thing on the 6th, but the result was not sent until 9 April (day 9). If this had been a pre-departure test, it would have expired.

The day 2 test, from a different provider, arrived in an email addressed to a different person. Imagine trying to explain that to an unimpressed border guard.

As icing on the cake, the company selling the tests insisted they are not liable for any delay in the mail — so absolutely no consequences that your author’s day 5 test results arrived on day 9.

There must be a reasonable solution

The issue with the UK government abrogating public health testing to the for-profit medical sector is underscored by the ongoing scandals with tests not being sent from government-approved providers — search for “001Doctor” or “LatusHealth” on Twitter for just two examples.

There are also ethical concerns to consider. In its November 2020 editorial Covid-19: politicisation, “corruption,” and suppression of science, the British Medical Journal stated: “The UK’s pandemic response relies too heavily on scientists and other government appointees with worrying competing interests, including shareholdings in companies that manufacture COVID-19 diagnostic tests, treatments, and vaccines. Government appointees are able to ignore or cherry pick science — another form of misuse — and indulge in anti-competitive practices that favour their own products and those of friends and associates.”

Why isn’t government building testing capacity at a reasonable cost within the NHS? If free tests in the UK were for some reason not possible, what if every citizen were given an allocation of one set of outbound and return NHS-provided travel PCR tests for 2021, allowing travel to a green or amber country as required? If the science continues to recommend hotel quarantine for a “red list” of countries, it seems reasonable that this be chargeable at cost, perhaps with exceptions or means-testing for (say) travel in extremis such as for a funeral or medical emergency.

“There are solutions out there to explore,” says Which? travel editor Rory Boland. “Other regional and national governments have either introduced capping or purchased large numbers of tests at scale, and then charged these at cost for private use.”

The clock is ticking, with the UK supposed to open to outbound international travel as early as 17 May, though holiday airline Jet2 has now cancelled travel through 23 June.

Without solving this testing problem, travel risks becoming a luxury only available to the rich for whom hundreds of dollars worth of tests per person is an option. That’s not just inequitable for travellers: it’s also a massive reputational problem for the internationally unilateralist post-Brexit UK — and for the wider travel industry as a whole.