A recent report published jointly by the Federal Aviation Administration and the United States Department of Agriculture examines 30 years of wildlife strike data. While the report shows that strike management, mitigation risks, and reporting has improved overall in the United States, the stakes remain high for aircraft, particularly in general aviation.

Strikes involving birds, mammals, bats and reptiles feature in the data. From 1990 to 2019 — before the COVID-19 crisis saw a large portion of the world fleet grounded — the FAA observed a 9.3-fold increase in the number of strikes reported annually, with 2019 achieving a record high of 17,228 strikes, up 6% from 2018.

However, the number of strikes that proved damaging has only increased slightly since 2010 and remains below the record 743 in 2000. 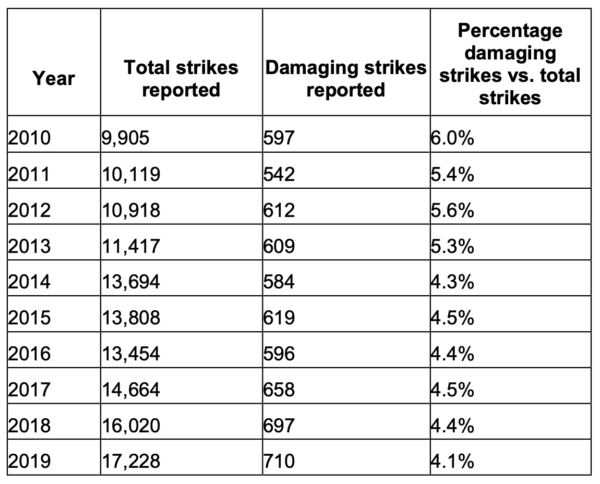 In 2019, there were 710 damaging strikes; this averages to about two damaging strikes per day, with an estimated 70,000 aircraft flying daily over US airspace. Image: FAA

That said, damaging strikes have not declined for general aviation.

“While the commercial and general aviation sectors showed increases of 152 percent and 209 percent, respectively, in the rate (per 100,000 movements) of reported strikes from 2000 to 2019, there was a 7 percent decline in the damage strike rate for commercial aircraft,” the study’s authors state.

“However, there was a 57 percent increase in the damage strike rate for general aviation aircraft.”

The economic impact of wildlife strikes is substantial. Beyond aircraft parts replacement, there are also issues for commercial aviation of flight groundings and cancellations, with a knock-on effect that quickly adds up. Assuming that all strikes had an adverse effect on the aircraft or the flight, the losses to the US civil aviation industry is as much as $196 million annually.

However, due to incomplete incident reporting and reports filed before the conclusion of damage assessments, the authors estimate the actual costs to be significantly higher.

Data from wildlife strikes reported by airline and airport employees go directly to the FAA’s wildlife strike database, and in recent years, reporting has improved, attributed to a greater focus by the FAA and NTSB to raise awareness about the risks of strikes, the introduction of simplified reporting methods, collaboration with wildlife experts and funding for airport improvements.

However, many smaller regional airports used by general aviation still lag in providing adequate fencing and other protections from wildlife incursions.