“Through [Pennsylvania Station] one entered the city like a god. Perhaps it was really too much. One scuttles in now like a rat.” The late architectural historian Vincent Scully perfectly summed up the experience of departing or arriving in New York City by train in his 1969 book American Architecture and Urbanism. Penn Station, the once great cathedral to rail travel, had been replaced by an afterthought.

Just a tad over half a century later and the dignity of rail travel in New York City has been restored with the opening of the Moynihan Train Hall, the long awaited expansion to Penn Station. Well, sort of. That is the case, at least, for some passengers going to some places, and only some of the time.

The Moynihan Train Hall consists of a large atrium built inside the United States Postal Office Farley Building across 8th Avenue. Penn Station itself remains largely unchanged. The expansive train hall primarily houses Amtrak, seeing its daytime operations (the hall is closed from 1am-5am) moved from the cramped, dim, usually malodorous Penn Station to the gleaming new space across the street. The Long Island Rail Road has a minor presence in the hall, but more on that later. 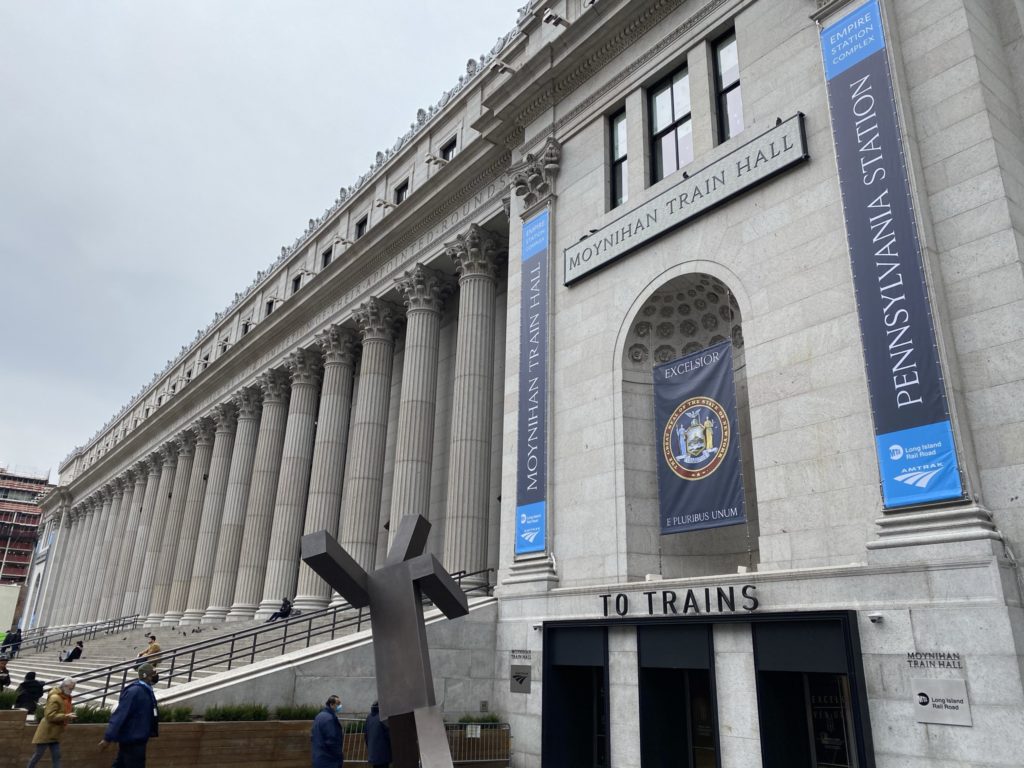 There should be no doubt that the Moynihan Train Hall is now, at least unofficially, Amtrak’s premiere rail hub in the nation. The 255,000 square foot passenger concourse is topped by a 92 foot tall skylight ceiling, bathing the hall in natural light during the day and dramatic lighting effects at night. Three permanent art installations are scattered throughout the hall, while expansive LED displays rotating through various calming imagery flank the interior walls. A food hall is planned to open in the fall of 2021. 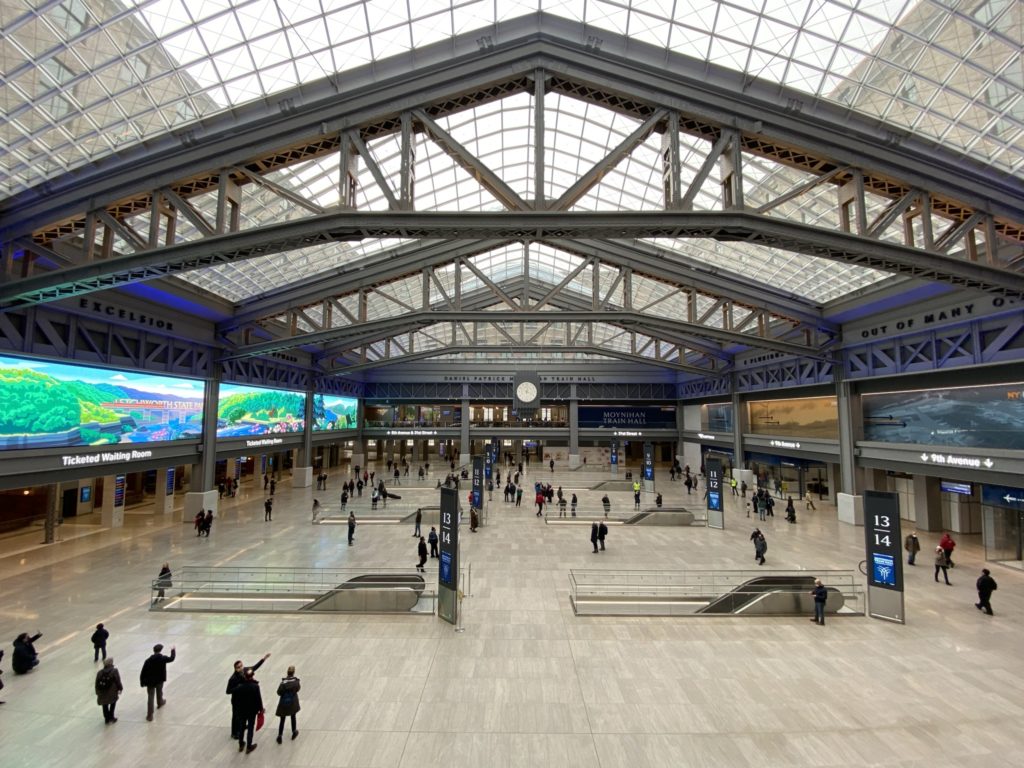 The hall includes new waiting rooms for ticketed passengers that appear to be a bit on the smaller side when compared to what was previously available in Penn Station, especially when accounting for the fact that the rest of the train hall includes absolutely no seating whatsoever. If you want to sit and wait for your train, this is where you have to go. The beautiful wooden benches are topped with thick blue cushions and flanked by numerous power outlets and USB ports. A dedicated set of restrooms are available inside the ticketed waiting room, which should come as a relief to anyone who has previously braved the restrooms in the old Penn Station. 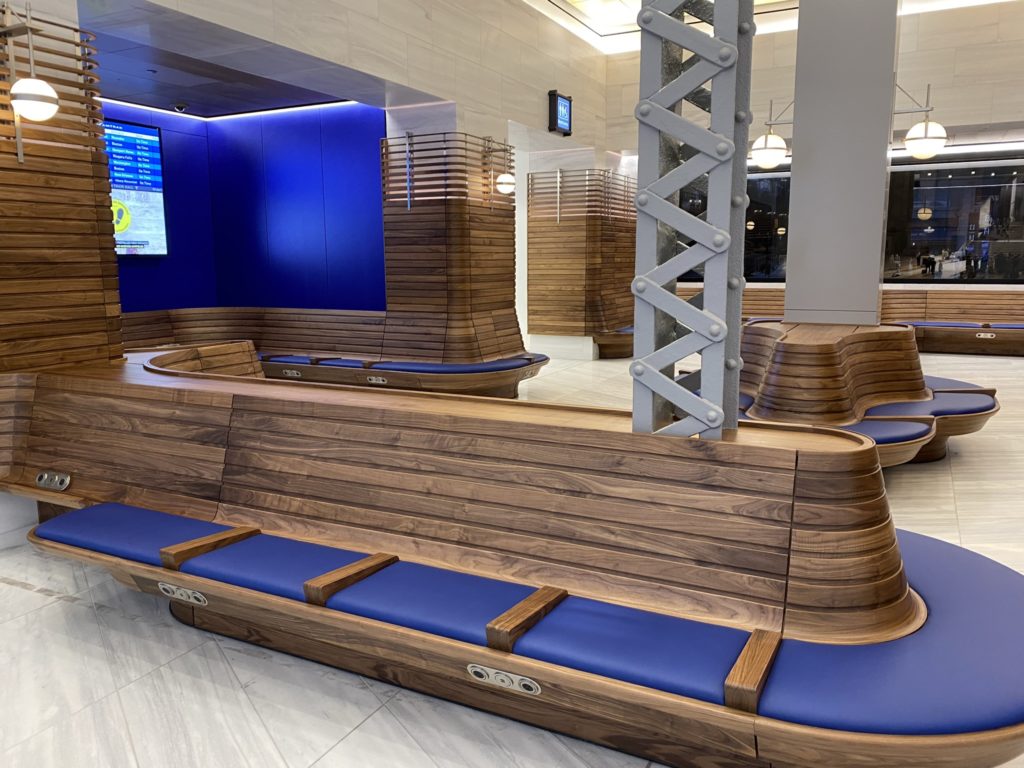 A new Metropolitan Lounge is located on the second floor of the hall and while it also is a bit on the small size the limitation on eligible passengers should help to keep the crowding down. This new lounge is a giant step up from the existing Club Acela back in Penn Station. The two spaces cannot be compared. 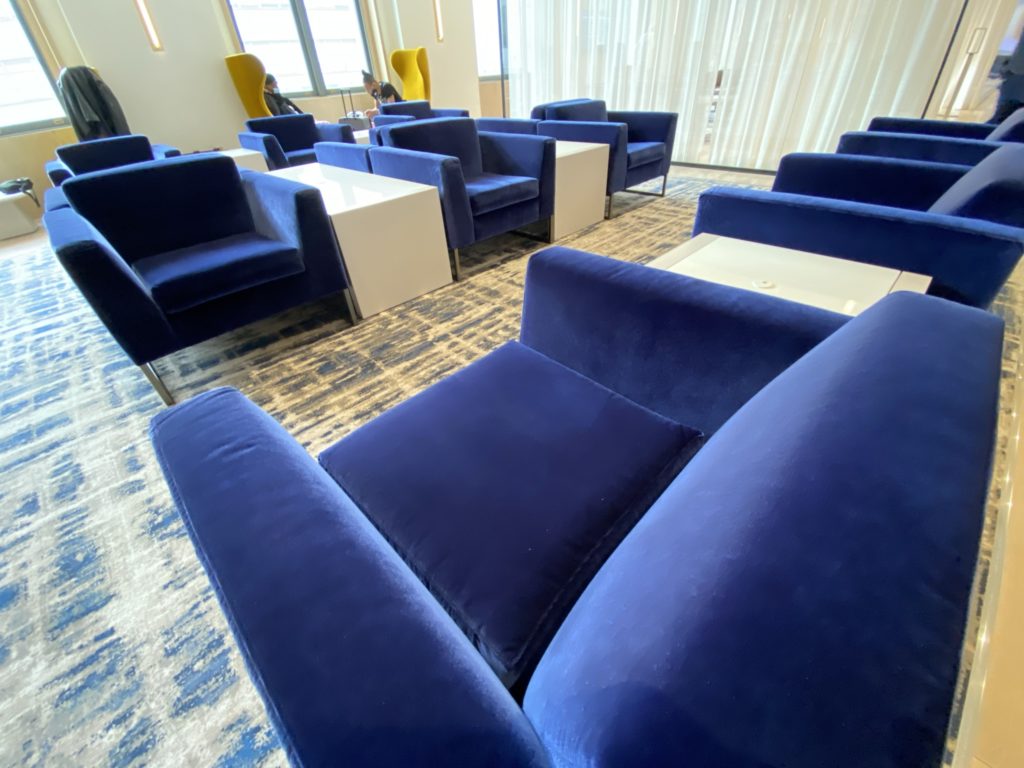 The new space has clearly taken many of its design cues from premium airline lounges, most similarly the Chicago O’Hare United Polaris lounge and American’s Flagship Lounge at JFK.

The lounge features numerous different types of seating, a dining area where hot and cold food will be served once COVID-19 restrictions are lifted, a dedicated customer support counter, and restrooms exclusive to the lounge. 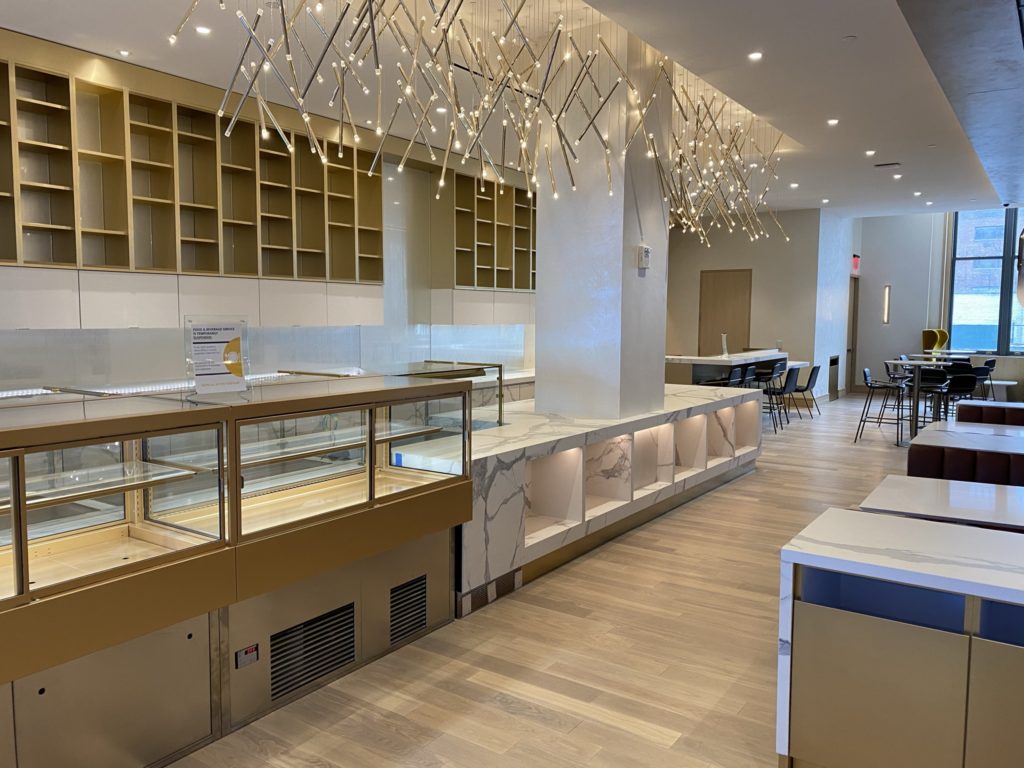 A balcony providing an elevated view of the entire hall extends along the width of the lounge. Passengers in the lounge will also be afforded priority boarding for trains.

Penn Station serves as a primary gateway to New York’s three area airports, though access to all three remains indirect and slow.

A dedicated kiosk for AirTrain information exists, though the directions provided by the display are lacking in detail and real-time information, instead providing information that was not valid on opening day due to track work.

Access to Long Island Rail Road tracks is fragmented, with five tracks only accessible by heading down a level to a different corridor. Passengers looking for New Jersey Transit or trains to Newark Airport will have to scuttle back to Penn Station, as NJ Transit has no presence or signage whatsoever in the new train hall. 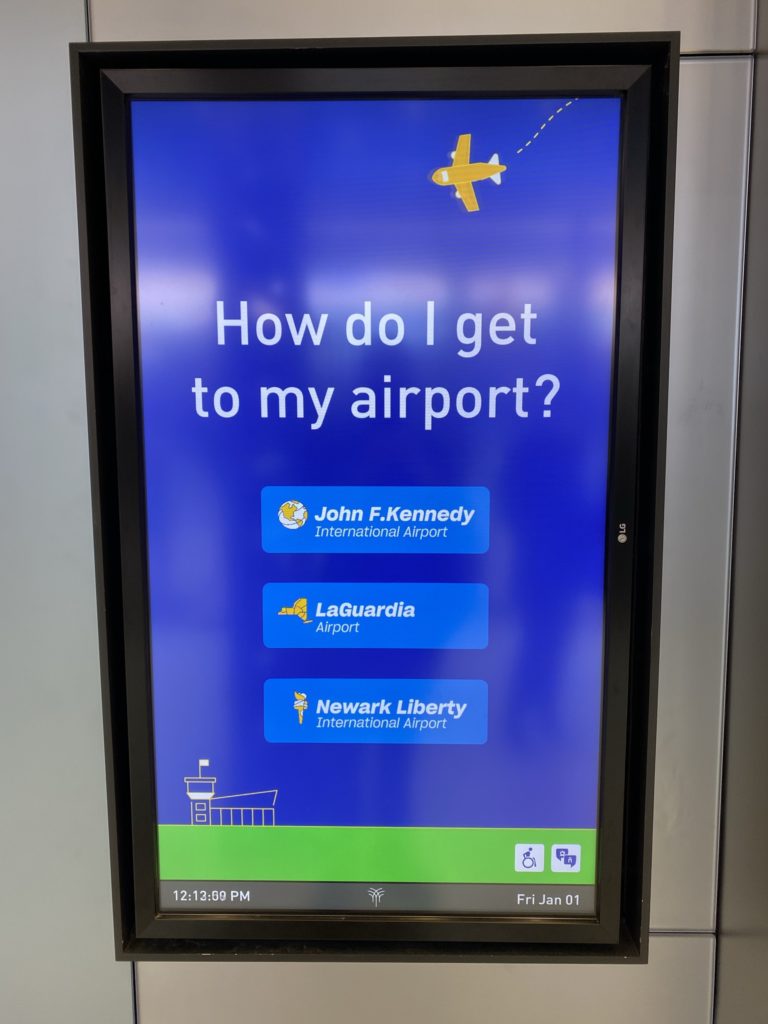 The Moynihan Train Hall is a monumental step in the right direction for rail travel in New York and the United States. It may have its imperfections and passengers will still get lost due to the overall size and fragmented nature of the complex, but the next time I take Amtrak I won’t time my arrival at the station to be just minutes before departure. I may just stick around a while and actually enjoy my time. 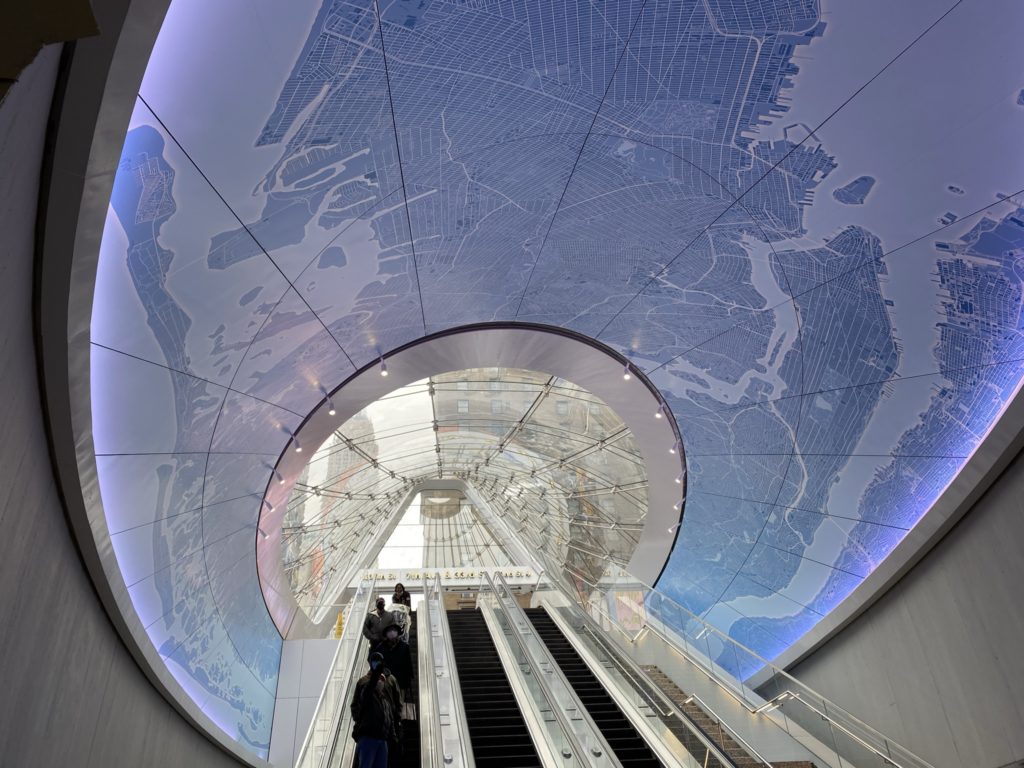