Who knows if we’ll see A380s flying again, and if so how many? It seems clear that, for many airlines, the downturn caused by the coronavirus crisis will either effectuate or accelerate the reduction in the superjumbo — and in first class. Lufthansa has already announced that the six A380s scheduled for sale to Airbus in 2022 will be permanently decommissioned.

But as ever in aviation, something will gradually replace first class: more spacious and more expansive business class, highly designed, is the most likely. After flying Singapore Airlines’ latest first class product recently, it may be helpful to consider some of the lessons from this product, especially if it turns out to have been the zenith of a generation of first class products.

Let’s start as you enter the suite. There’s a lot of space and, with a few exceptions around the doors, it’s entirely private. Within the suite, the layout means that, when you board and interact with the crew, you’re essentially staring directly at the person across the aisle from you because the open doors are positioned opposite to each other. That’s especially true when you are literally facing the door while dining. Could some way not have been found to stagger the sliding and non-sliding sections of each suite door? 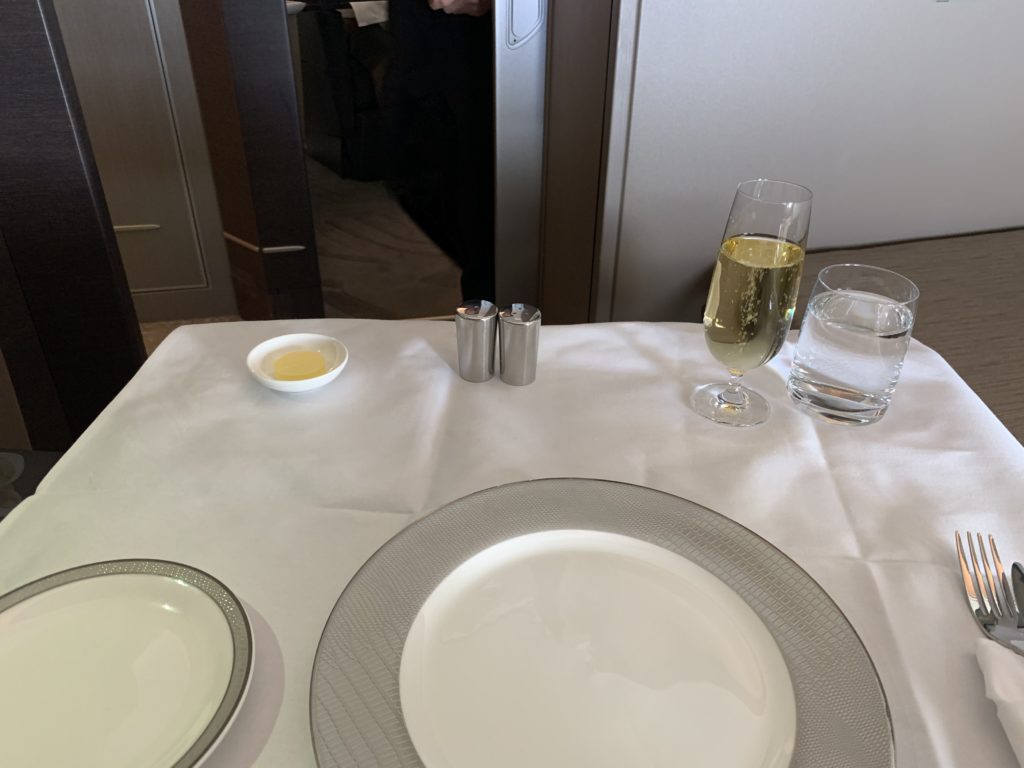 While dining, you’re staring straight at the door, and at the suite occupant opposite. Image: John Walton

The single rotating armchair faces, alternately, a wall, the door, or the foot of the bed and the 32″ IFE monitor, which can be controlled with a touchscreen tablet. 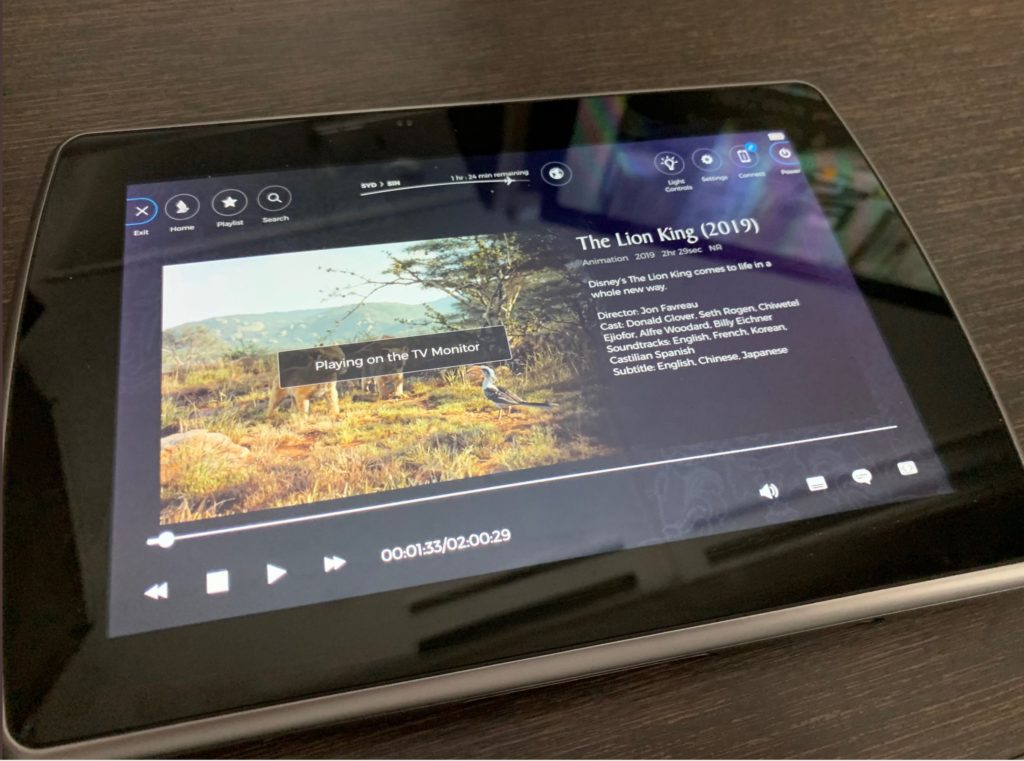 The chair isn’t hugely adjustable or comfortable: there’s no deep-relaxation Z-bed here, and that feels like a missed trick for day flights in particular. The old Singapore Airlines Suites were much better in this regard.

The slow motorized rotation of the chair to face various parts of the suite on board the A380 is awkward in a sort of Dr Evil fashion, meaning you either have to stand up and follow the chair in its rotation or to remain seated and lift your legs like some sort of odd calisthenic practice or scoot your feet around. It’s just odd, unlike home chairs you move with your feet, which could perhaps have been a more elegant solution. 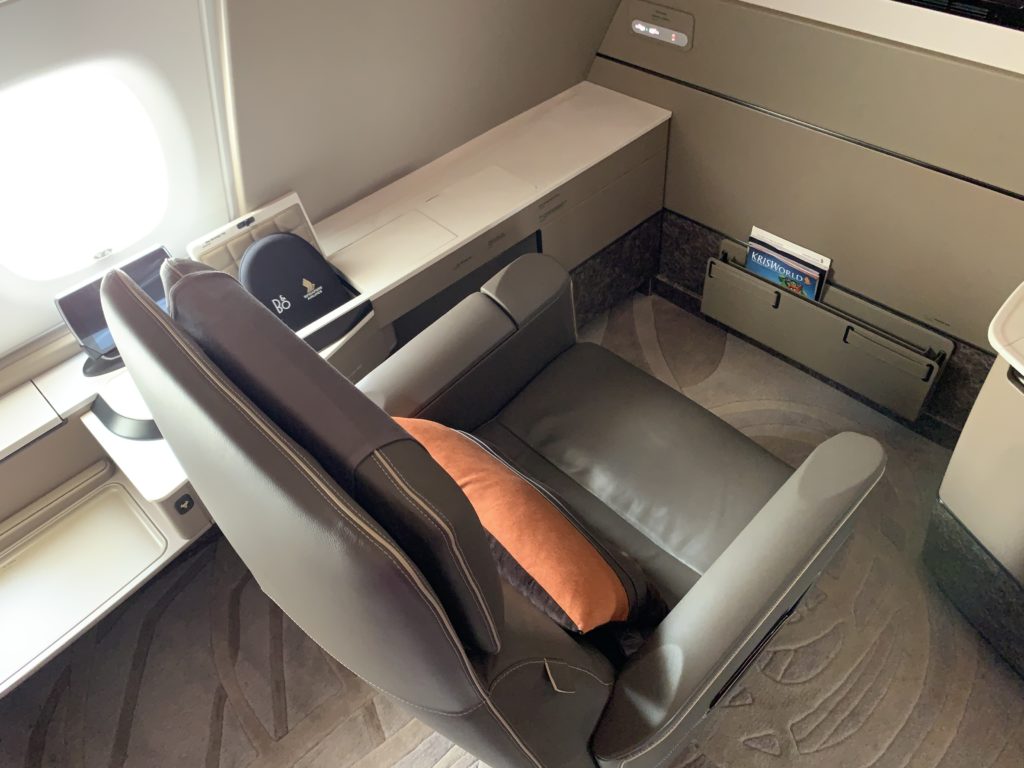 If we were choosing a home armchair, would it look like this? Image: John Walton

To its credit, Singapore Airlines’ decision to adopt a companion app for the IFE systems on its newer A380s and other aircraft types – enabling passengers to sync their personal device with the onboard system – may be prescient, as it readies them for a more touchless passenger experience, which is sure to gain in popularity in a post-pandemic world.

I paired my smart phone with the IFE system, and could have used the device to access any pre-set playlist or forgo the tablet controller entirely and instead navigate the IFE via my phone’s intuitive GUI interface. 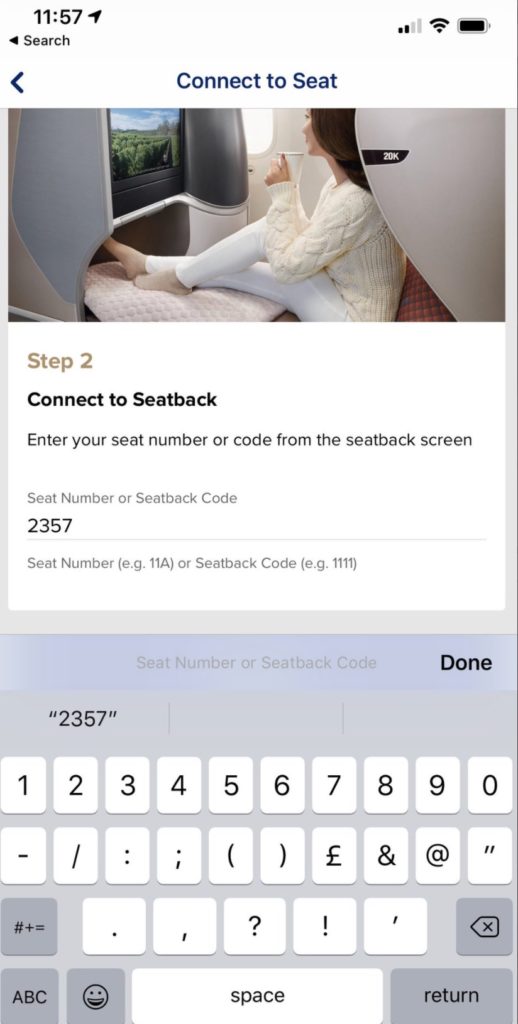 Aesthetics are inherently personal, but there are certain universal principles that are important to adopt. The various elements of the first class suite don’t speak the same design language, particularly around shapes, curves, angles and patterns.

Yes, these are first world, 21st Century problems. But figuring out how the transition between functional spaces work will be crucial for future products. 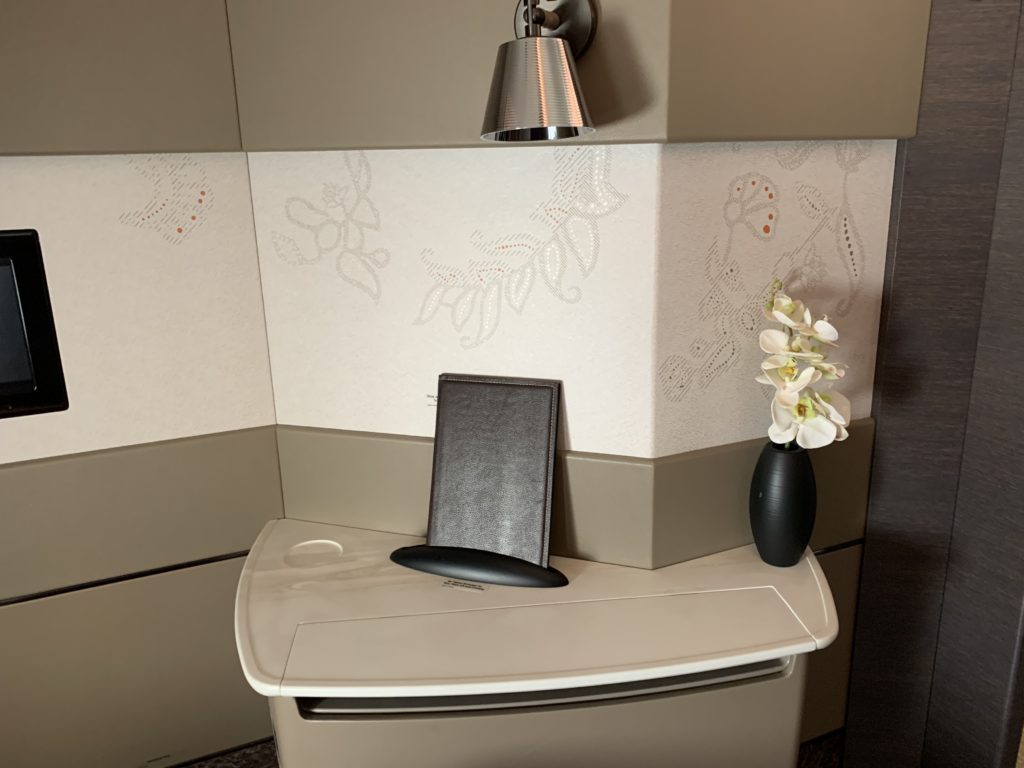 The table is an interesting and thought-provoking concept, but in execution it leaves much to be desired. Image: John Walton

The sharp squares of half of the window-side console don’t follow into either the chair or the table setup. It’s all very much a confusion of design elements that could do with simplification and refinement — definitely something to take away for the next generation of products. 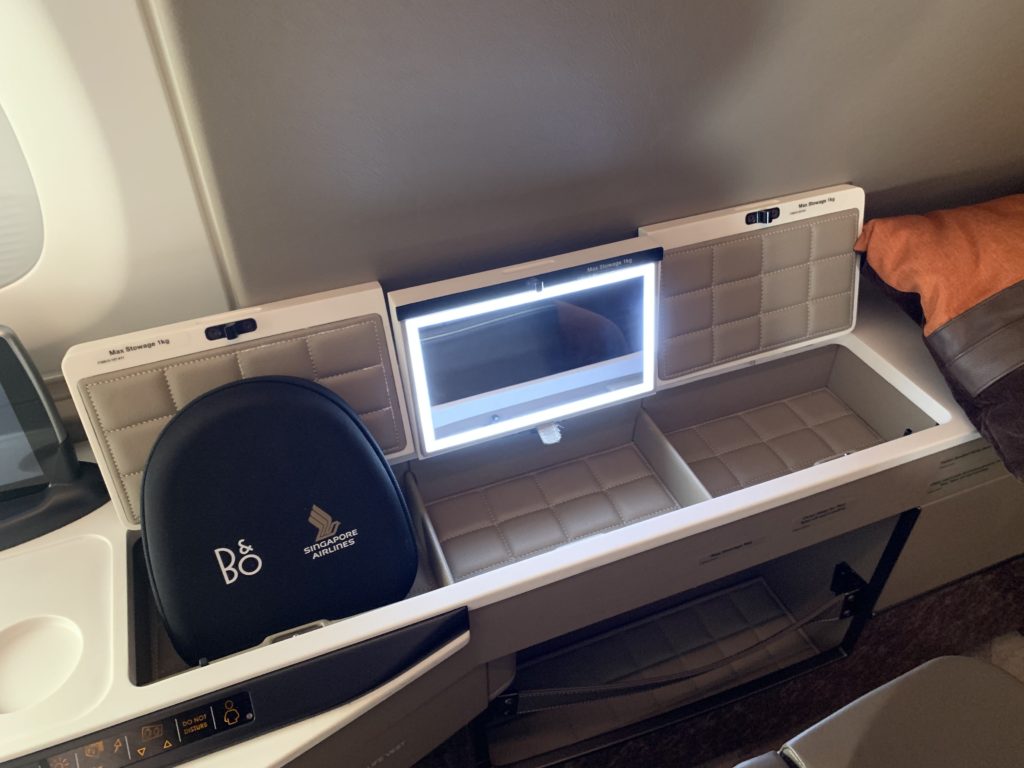 The design language of multiple storage spaces don’t carry over to the rest of the suite. Image: John Walton

It’s hard to think of a recent airline product launch that hasn’t experienced fit and finish teething problems, and this one is no different: something else to take away for the future. But it was nonetheless a surprise to see that some of the thermoplastics were becoming visibly unglued, and the fabrics separating from what they were attached to.

There’s really no need for this to look clunky — or to have thermoplastics coming unglued. Image: John Walton

It was also striking how clunky the bunk looked when folded away. It felt a little too Amtrak and not enough Orient Express or even Indian Pacific. Particularly in comparison with the previous generation of Singapore Airlines Suites, where the bed folds invisibly into the wall, this felt like a step backwards. 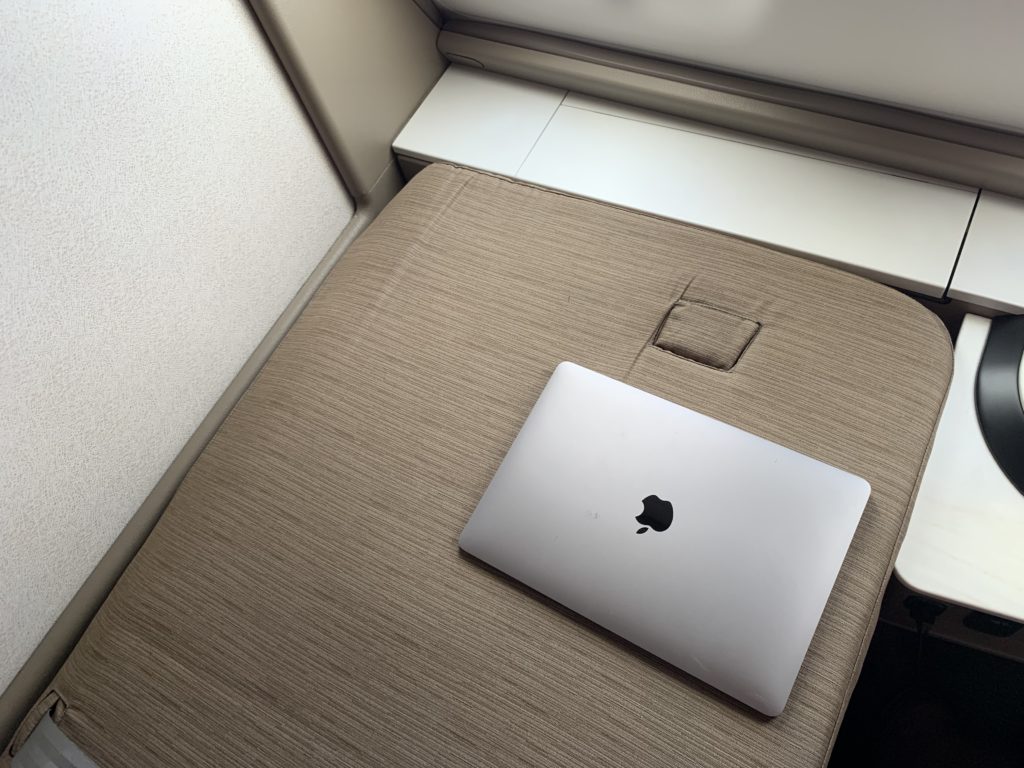 The bed is neither very wide, nor very soft. (13 MacBook Air for scale.) Image: John Walton 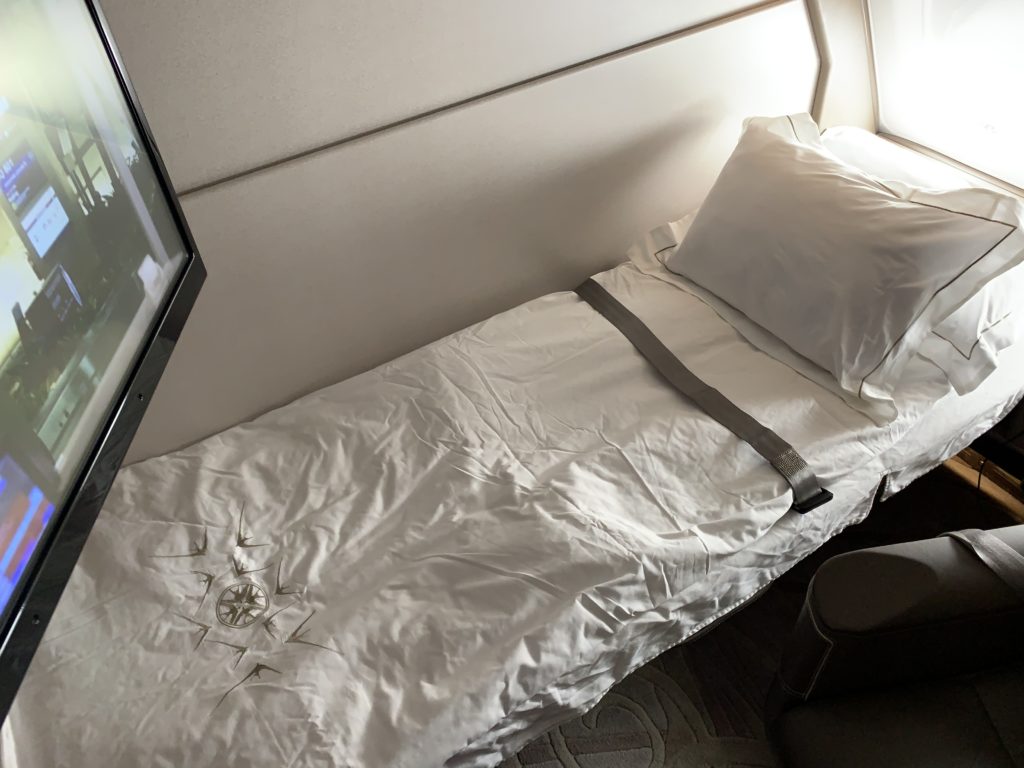 Future products will need to think about whether additional bed size can be found within a larger space like this. Image: John Walton

Outside the suite, Singapore Airlines, like many carriers, has made the most of the aircraft’s prominent “forehead” space at the front of the upper deck to house extra-large lavatories. It was very pleasant to have space to change clothes that did not involve tiptoeing around floors right next to the lavatory bowl.

Can some space — convertible, even? — be created for this purpose on aircraft without the A380’s nooks and crannies? 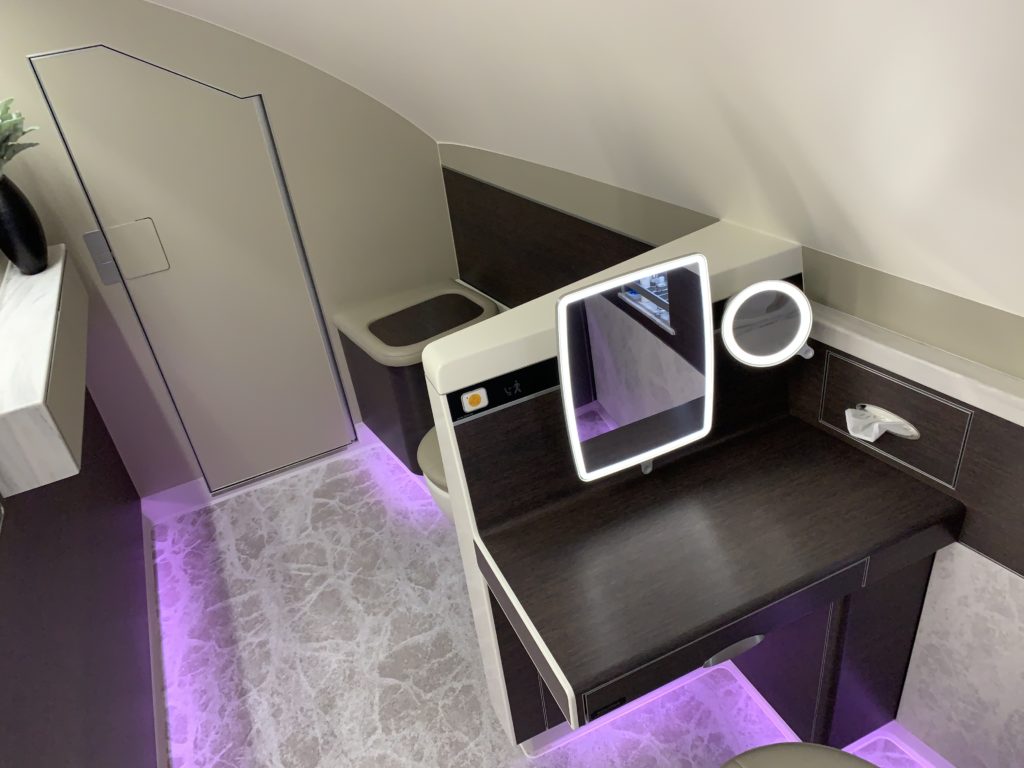 Roomy lavatories with changing spaces are definitely something to try to replicate. Image: John Walton

Lastly, there seem to be competing schools of thought in premium cabins about whether or not passengers want to enjoy the view out the window or not. This product is firmly in the latter camp: it’s almost impossible to look out of the windows from any part of the suite except for if you’re seated cross-legged at the head of the bed. Can a happier medium be found for those of us who enjoy gazing out at the wide blue — or green, or red, or golden — world below us? 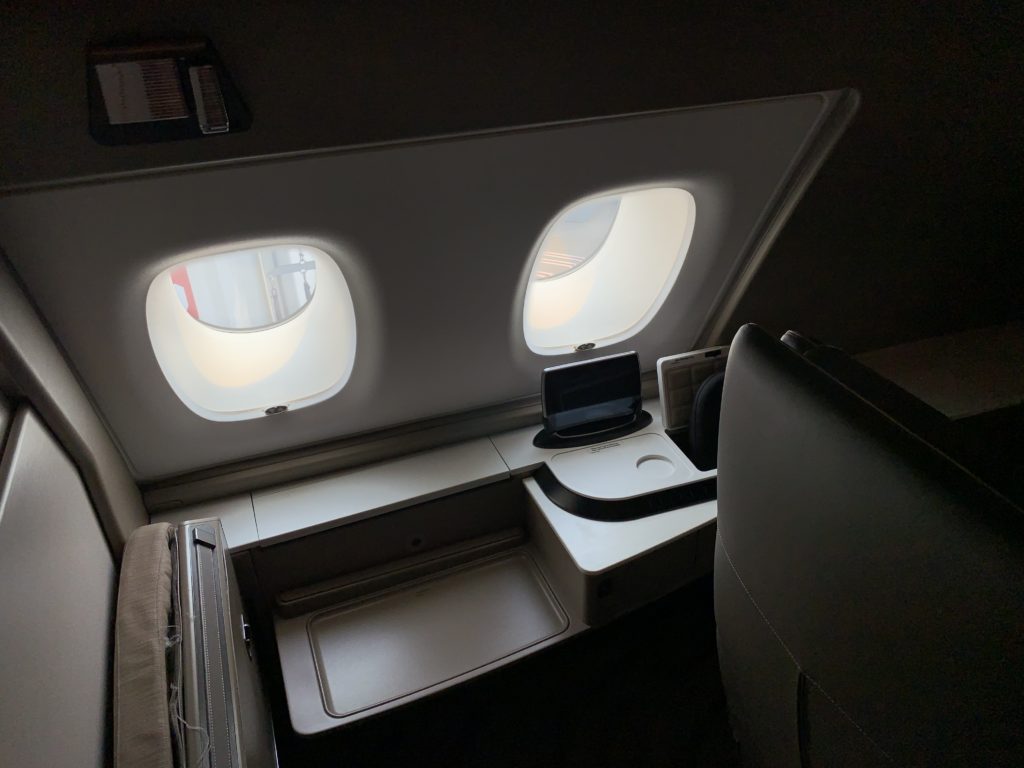 It shouldn’t be impossible to enjoy the view from a window seat. Image: John Walton