Having successfully supported inflight broadband transmissions via its electronically steered antenna (ESA) while switching between LEO and GEO satellites in the Ka-band frequency, Gilat Satellite Networks believes it is well-positioned to secure a meaningful slice of the ESA market for inflight connectivity (IFC) in both commercial and business aviation.

“The market for ESA antennas will develop over time. Given the clear advantages of ESA antennas we believe that the end-game for nearly all IFC will be conformal ESAs,” said Gilat VP mobility and global accounts Ron Levin in reference to what Gilat sees as a vast opportunity in the aero sector.

He cautioned that the move to conformal ESAs in aero will, of course, take time, as there are existing install bases of mechanically steered antennas “providing adequate service today and they will take time to phase out”.

Also, admittedly, ESA technology still needs some maturing before it goes fully to prime time. The bottom line though is that the long-term ESA market is as large as the aggregate number of commercial and business aviation planes in operation.

The Gilat executive has reason to be optimistic. During recent flight tests in North America, Gilat’s ESA showed high performance and instantaneous Ka-band switchovers between – and operating on – Telesat’s Phase 1 LEO satellite and its Anik F3 GEO satellite on board Honeywell’s Boeing 757 commercial test aircraft, across several flight tests.

For the demo, Gilat’s ESA was installed under the radome of Honeywell’s test aircraft (see the image below with dotted line around the radome). 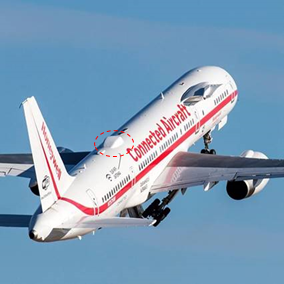 Asked by RGN if Gilat followed the ARINC 792 standard for nextgen, flat panel antennas, Levin explained: “The installation on board Honeywell’s Boeing 757 testbed aircraft took advantage of the existing fittings, penetration holes and installation scheme using a modified adapter plate, custom made by the Honeywell team.

“The whole ESA terminal includes only 2 LRUs; the ModMan which is installed in-cabin and the ESA antenna installed under the 757’s existing Ka-band radome. Gilat’s ESA terminal architecture doesn’t include external KRFU, KANDU nor KPSU, which greatly simplifies the installation process and overall operation and maintenance.” 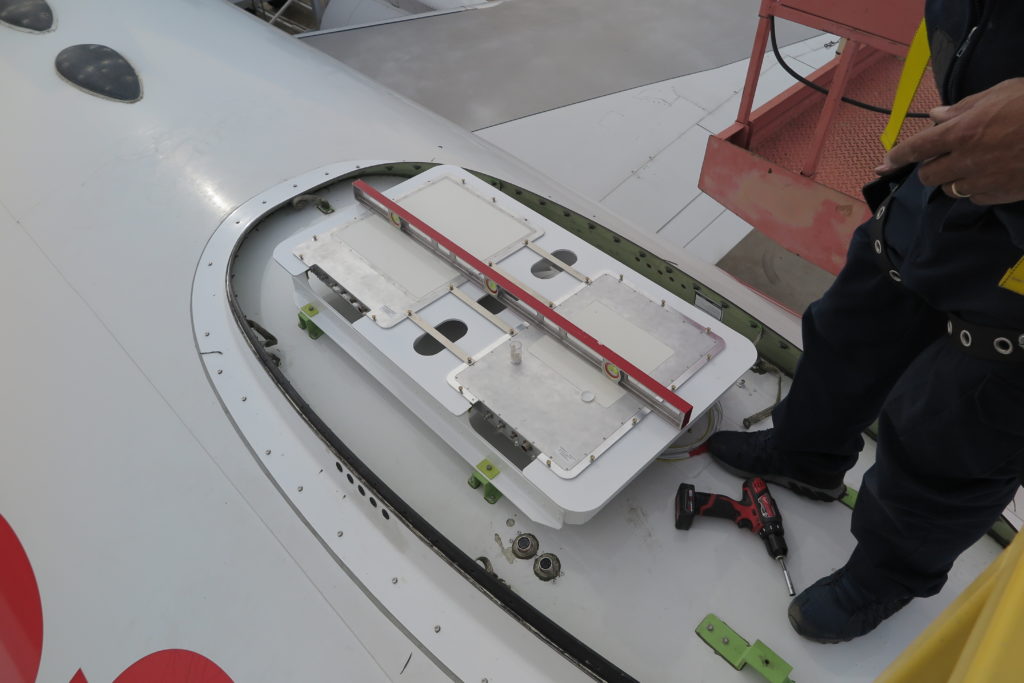 Gilat is now laying claim to being the first to support inflight connectivity via an ESA over satellites in non-geostationary orbit (NGSO).

Such collaboration amongst stakeholders is increasingly common, as a growing faction of industry is eager to adopt a more standardized approach to developing and installing inflight connectivity systems. To wit, the Seamless Air Alliance last week released an IFC standard that breaks down IFC into eight functional components. Does Gilat have any plans for adhering to the Seamless standard at some point?

“Gilat believes in ‘open architecture’ and standardization and our products support the required interfaces for integration with 3rd party systems. We are evaluating and are already engaged in preliminary discussions with the Seamless Air Alliance and at the same time we are reviewing their standard for roadmap planning,” responded Levin.

He noted that Gilat’s ESA technology is ready now and Gilat can bring a fully certified product to market within 12 months. “Since this market is customer and project-driven, actual time to market will depend on business considerations. The market where we see the most immediate demand is indeed BizAv, where smaller jets cannot fit a TMA while the fuselage curvature does not allow for a mechanically steered antenna. This market is also the sweet spot for our current technology,” he said. 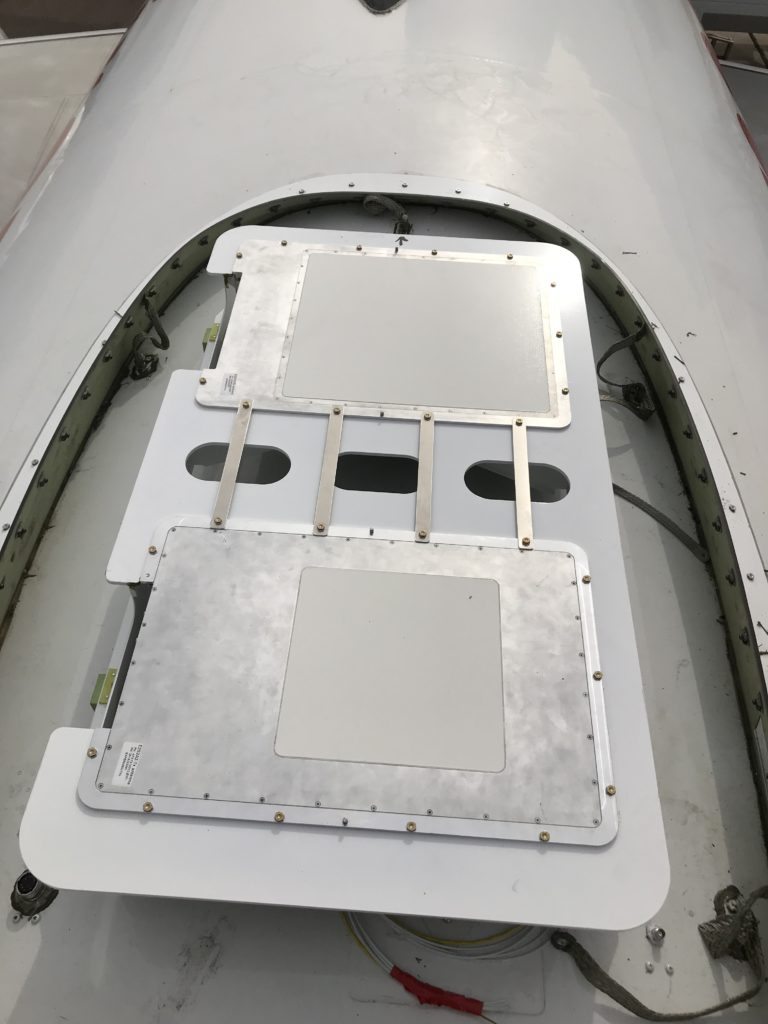 Telesat’s forthcoming LEO network and OneWeb are just a couple of the NGSO constellations being built out. Maintaining a NGSO-agnostic approach, Gilat expects to support multiple services for IFC. “We are working with some of them and believe there is a place for more than one constellation in this market,” said Levin in broad reference to NGSOs. “Gilat’s ESA will be able to work with any of these constellations.”

Comtech Telecommunications recently agreed to acquire Gilat for $532.5 million. But until closing of the merger agreement Gilat remains an independent company. “After closing Gilat will become a wholly-owned subsidiary of Comtech and will maintain its own brand. As such there are no plans to change Gilat’s aero plans,” said Levin. 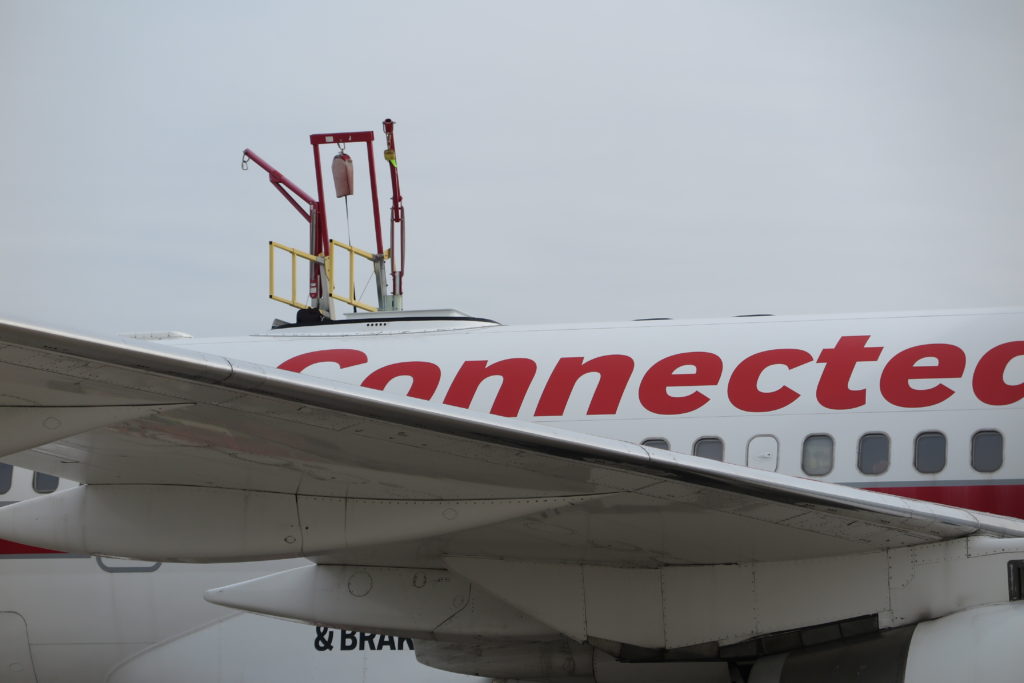 All images credited to Gilat