The airline invited Runway Girl Network to join the inaugural flight between Seattle Tacoma International Airport and Singapore’s Changi Airport in business class. While SIA comped the Airbus A350-900 flight and one night at a hotel, our opinions remain our own.

Preflight festivities are always a good time. The inbound aircraft landed at Sea-Tac with a water cannon salute, and a rainbow. 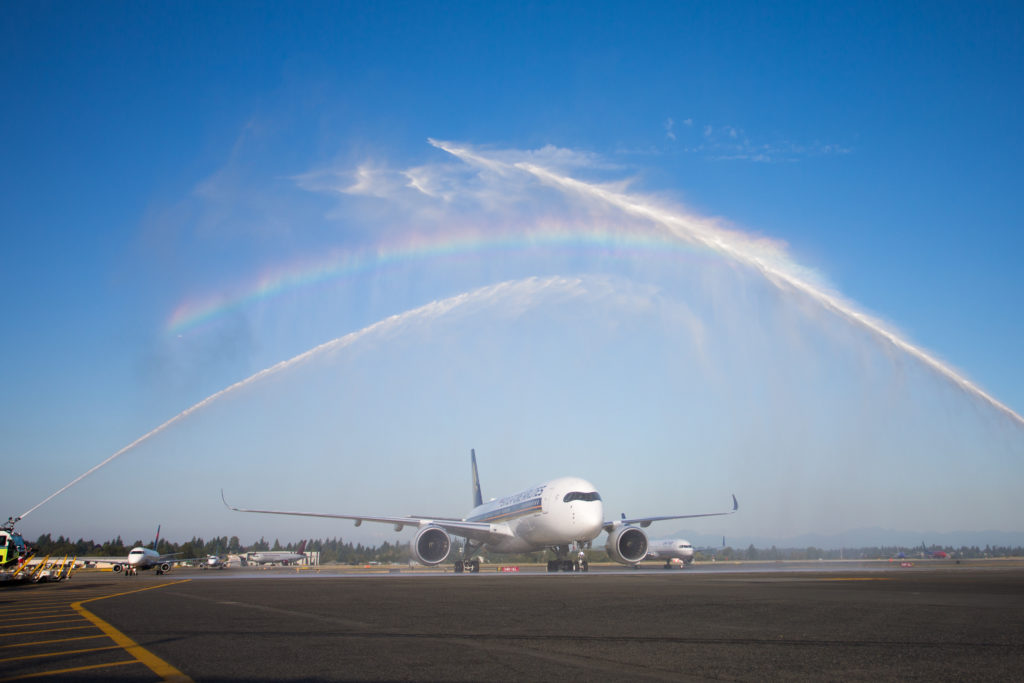 Executives from the airport and the airline welcomed the new flight, and boarding passengers were provided a goodie bag complete with aircraft model. 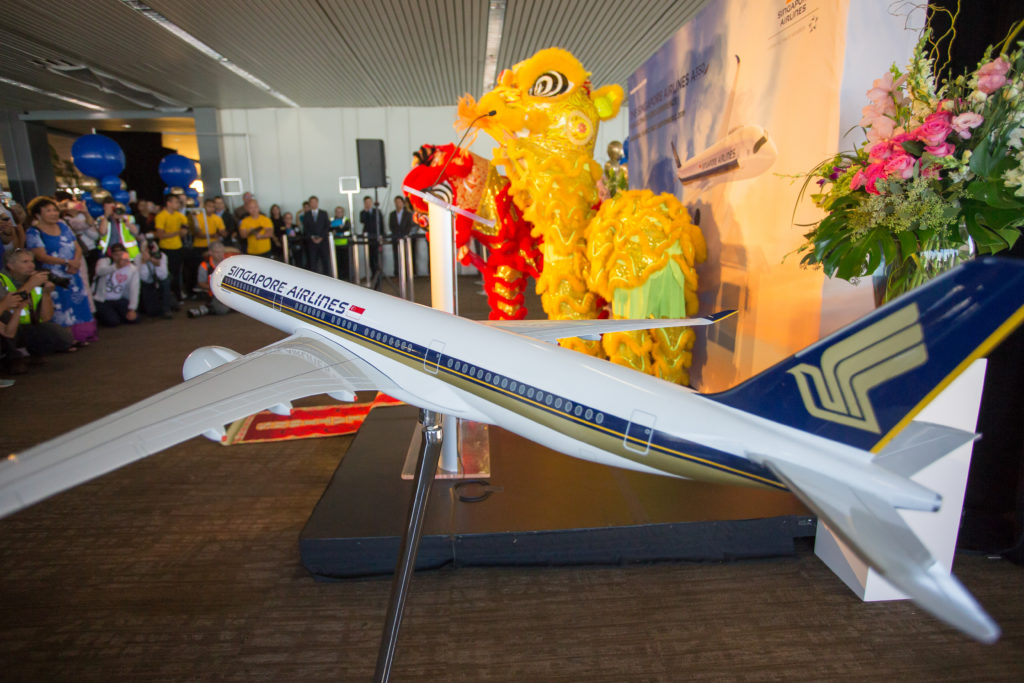 The flight to Changi took off a bit late, which is hardly unusual for first flights out of a new station. With 15 hours aloft, there’s a lot to cover, so let’s dive right in.

One of the highlights is Singapore’s world renowned catering, and this flight did not disappoint. A black cherry flan, inspired by Seattle’s renowned cherries, was delicious. A baked chicken entree with cheese shavings, rosemary, and veggies was absolutely superb, ranking as one of the best meals I’ve ever had in-flight. And a surprise mid-flight snack of local Top Pot doughnuts was a welcome treat. 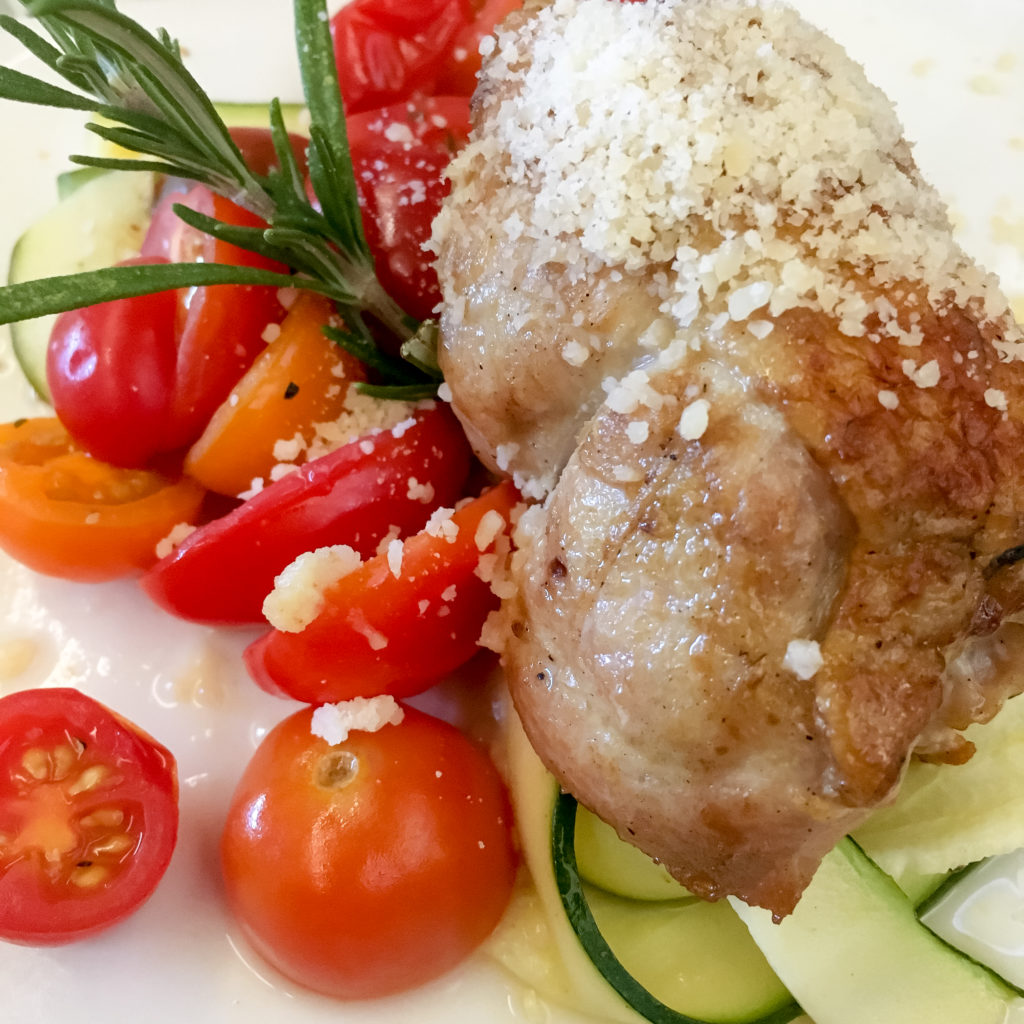 But what struck me were some of the smaller points.

First, the portion sizes. The airline has moved away from gut-busting entrees and appetizers, moving to smaller plates overall across the board. I still had a culinary adventure during each of the two meal services, while not being so overfull that I’d need to be rolled off the plane after landing. I like that.

It’s Singapore, so if dinner wasn’t enough or you simply wish to engorge yourself, you can. Snacks between meals range from guilty pleasures like chips and chocolate to quasi meals such as sandwiches and soups. Drink service continues throughout with a range of wine, spirits, and cocktails/mocktails. 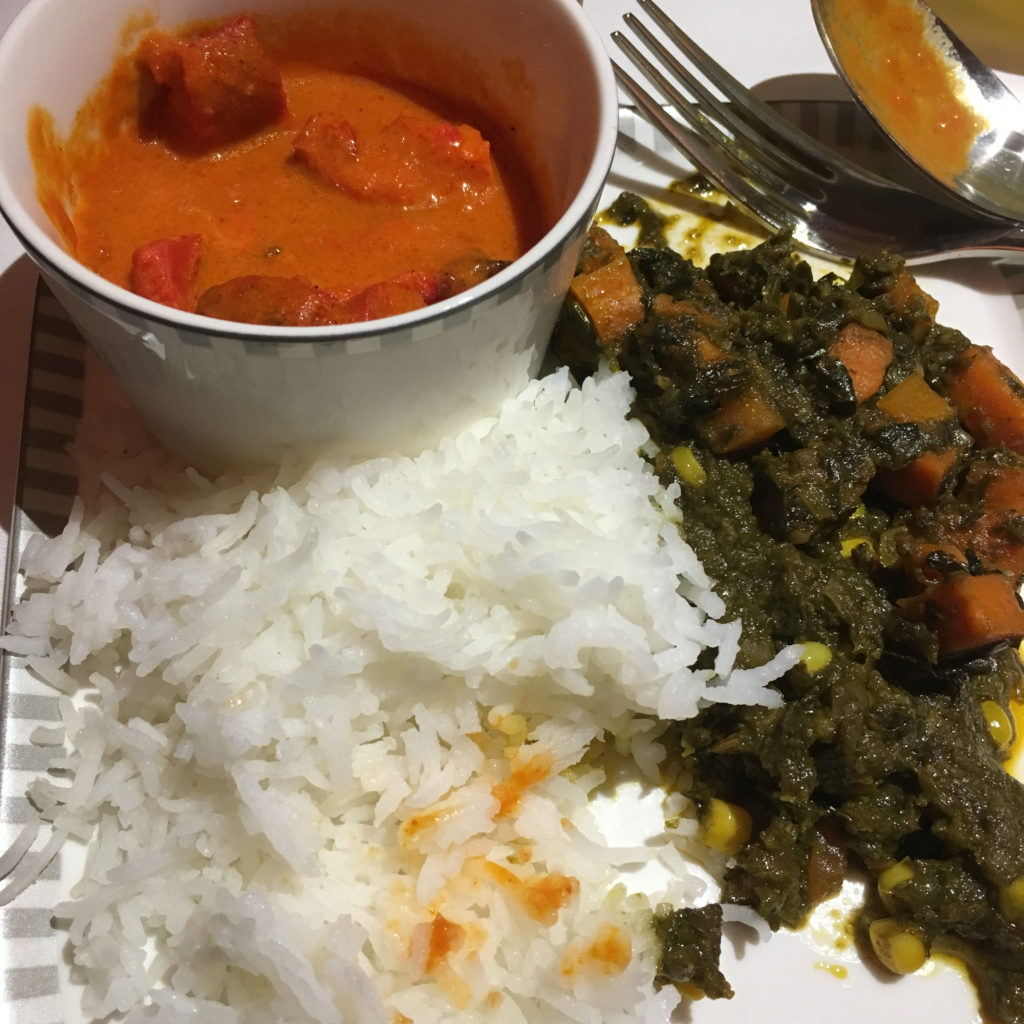 Second, food waste. It was refreshing to see so many plates, my own included, headed back to the galley virtually clean. In an industry that, when put into perspective, borders on luxury, on an airline that prides itself – quite rightly – on being luxurious, its great to see a focus on reducing waste.

Third, mocktails don’t get enough love. I enjoy a great whiskey, but on long flights alcohol isn’t my friend. The mocktail, of which Singapore offers a dozen or so, offers a way to taste something new and interesting while staying hydrated. I’d love to see more airlines move into this space. 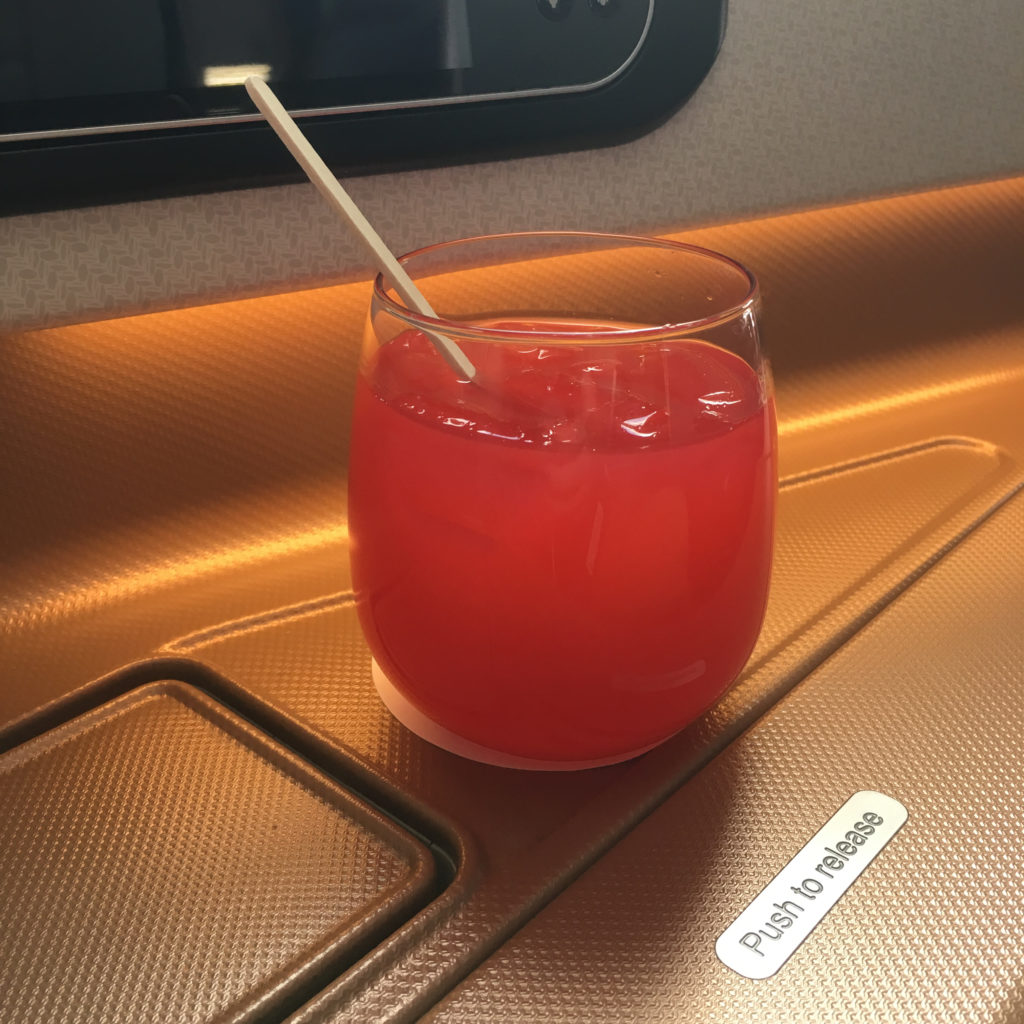 The seat itself is generally good. Singapore outfits the business class cabin with 42 seats in a two-cabin, industry standard 1-2-1 configuration. I had seat 19A, a bulkhead at the foot of the second cabin. It has all the usual accouterments, like international power ports, USB chargers, seat controls, reading lights, storage, and a clever vanity mirror. 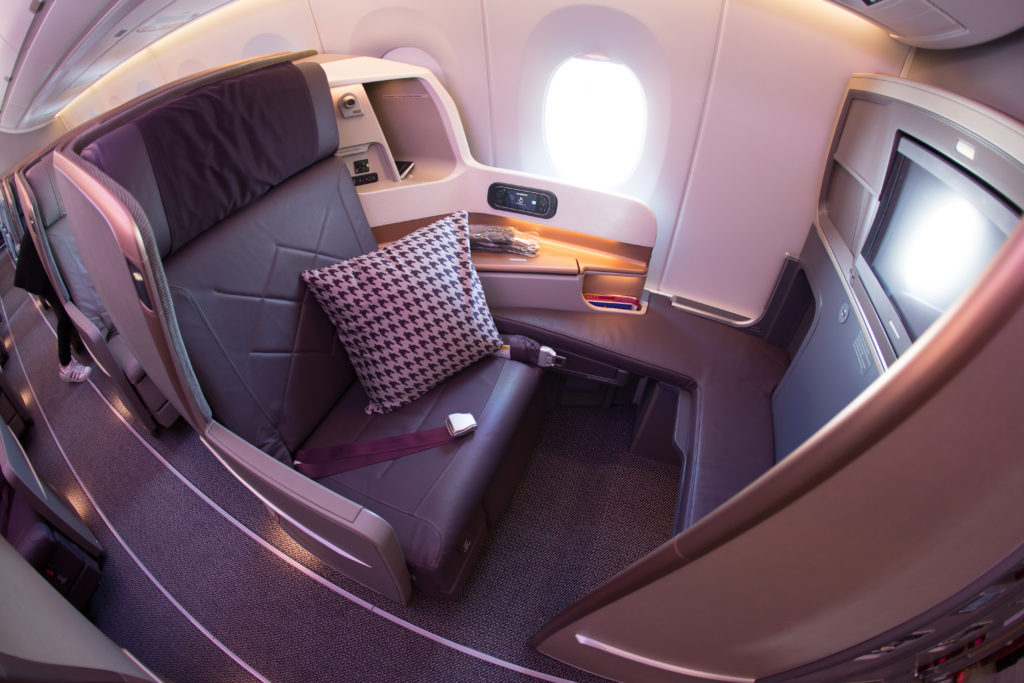 The inflight entertainment screen is enormous and fantastically crisp, and the mattress topper was exceptionally comfortable. I appreciated the ‘do not disturb’ button, and the additional privacy afforded to those in bulkhead seats like mine. The three pillows and large duvet were great, too. And the 28” of seat width is virtually palatial. 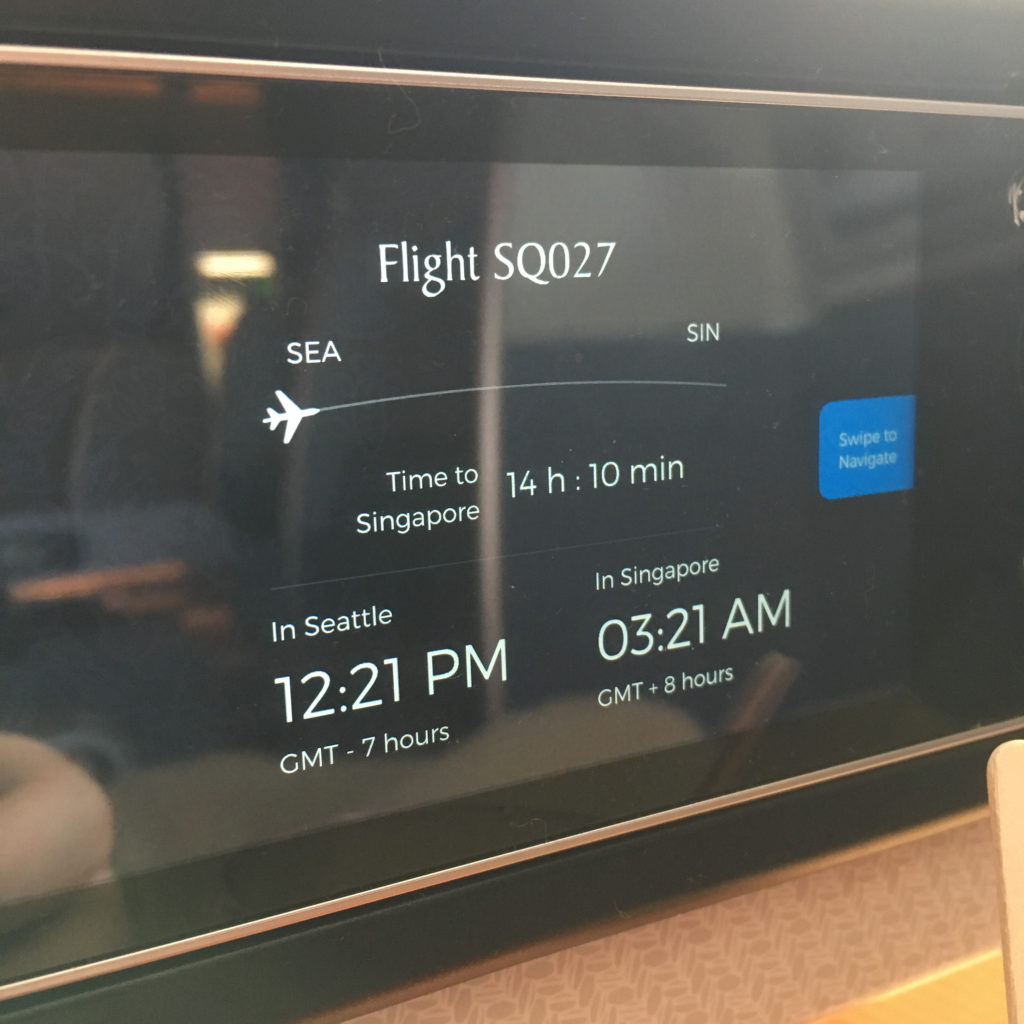 The bespoke Jamco seat only partially reclines into a lounge position before stopping. To go full flat requires putting the seat back full and upright, getting out of the seat, and then folding it over into a bed. The relatively small pitch of 60” requires a footwell to accommodate the full 78” length, which isn’t unusual, except that the seat design requires the passenger to sleep angled across the seat instead of inline. It doesn’t bother me, but I know it definitely bothers others.

Singapore stocks its Panasonic Avionics-driven IFE system extremely well, with well over 1,000 TV shows and movies to choose from and almost the same number of music options. The screen can only be controlled via a tethered remote, which itself has its own screen. The system is intuitive and easy to use. 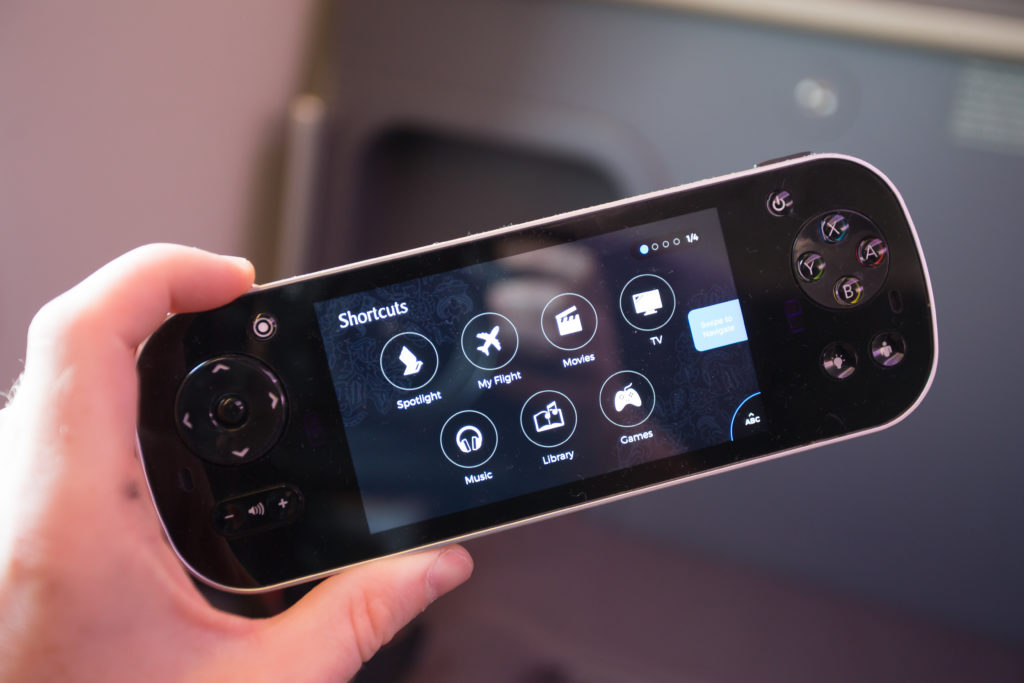 The airline offers 49 shows with complete seasons available, including my favorite, Barry, which I binged-watched straight through. It is a welcome change to the usual two to five seasons that many other airlines carry.

A handful of wellness videos provide realistic ways to keep as limber as possible on a long flight. And for those wondering, yes, Sleepless in Seattle was available for viewing.

The Internet, also provided by Panasonic, was a little off on the flight. Passengers were treated to 30MB of free data, after which prices ranged from $5US for 15MB to $15 for 300MB.

The free package disappeared in six minutes flat checking emails alone, while a $10 100MB plan installed on my phone lasted a big longer when restricted to chat apps and basic email. Business class passengers were supposed to receive 100MB free, but for whatever reason it did not work and was not redeemable.

The flight landed on time 15 hours later at 5pm the next day. The timing is fantastic, and lines up well with both evening regional connections onward or adjusting to the new time change. Had this flight been available when I was flying to Southeast Asia in July, my journey would’ve been cut down by eight hours.

Overall, it’s a great new addition for Seattle, and one I imagine I’ll be utilizing again soon.