What kind of #AvGeek would I be if I chose to fly the same airline twice on the world’s busiest route? Not willing to find out, I traded low-cost carrier Jin Air for Korean Air proper on a Jeju Island to Seoul return flight. Once again having a smorgasbord of different aircraft to choose from, I went with Korean’s newest fleet type, the Airbus A220-300, formerly known as the C Series.

Jeju International Airport is a bit of a chaotic terminal, so I ducked into the Korean Air lounge utilizing Priority Pass. The lounge, located before security, is not worth the price of admission, with sparse food and beverage options and some moderately comfortable chairs. But the lounge experience was at least salvaged by a fantastic view of the airfield. 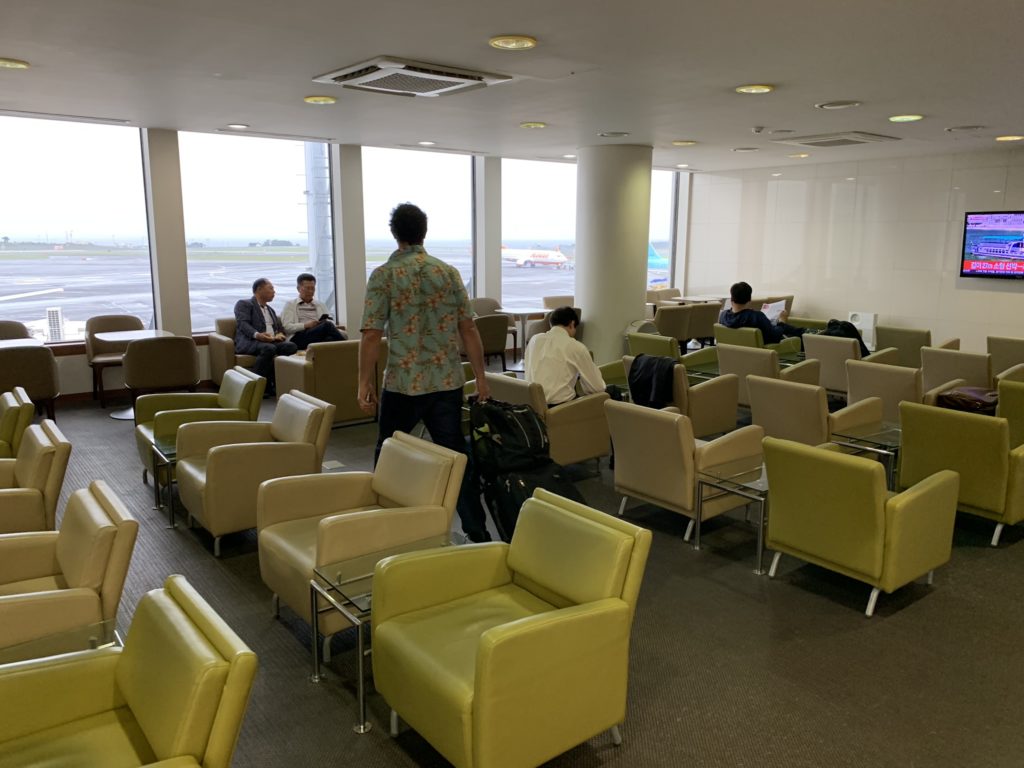 With dozens of flights departing for Seoul every hour, often within minutes of each other, it’s kind of like playing flight roulette to pick the winning service. My flight was running slightly behind schedule due to what was described as “aircraft connection”, but announcements and signage attempted to communicate the delay to passengers.

The A220 is the only aircraft type in Korean’s fleet to not offer a business class product. The first few rows feature extra-legroom seats with 36” pitch, which the carrier bills as “premium economy”. But the aircraft features the same 2-3 layout for the length of the cabin.

I picked a regular economy seat for this flight, figuring the naturally wide seats of the A220 would make up for any potential pitch issues. But I discovered that the seats towards the back of the aircraft are actually quite roomy. The physical seat, however, was a bit stiffer than I typically prefer.

Each seat features a USB port powerful enough to actually charge an iPhone rather than just power it, supplemented by an AC power outlet under the seat. This traveler appreciates when an airline brings power to the people. 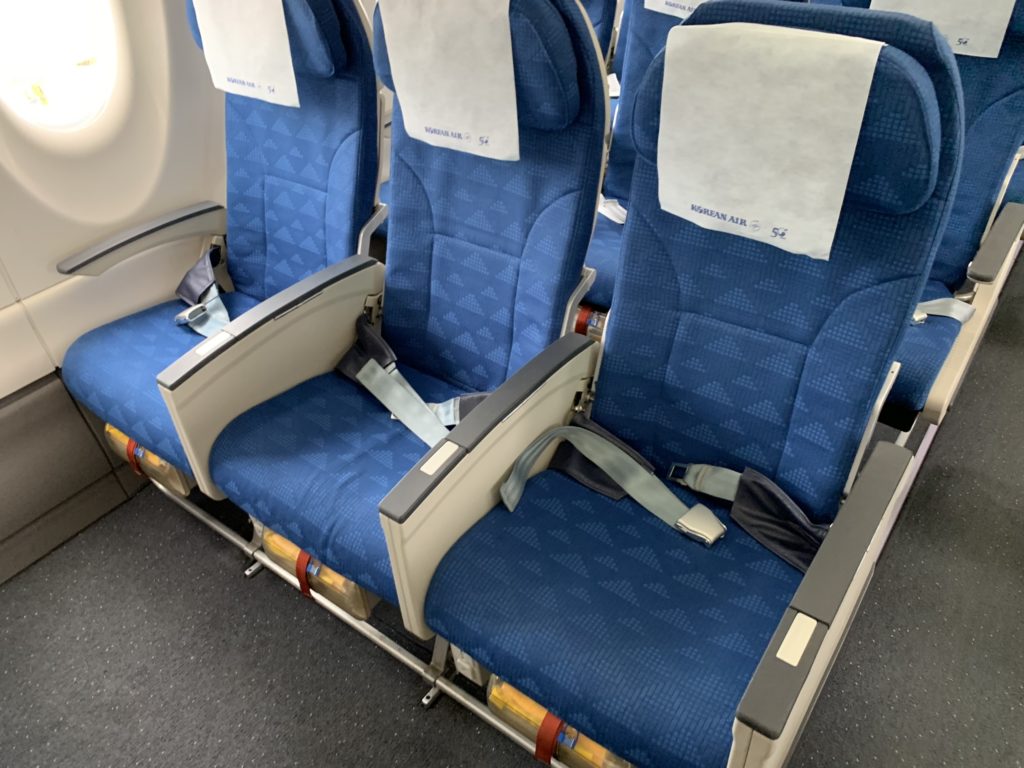 The carrier’s pre-flight and onboard messaging indicates that the wireless system requires a special app to be downloaded; this is separate from the Korean Air app, and let it be said that Korean’s implementation of the system leaves a lot to be desired.

The seats lack a tablet holder, which seems like a big miss for a new aircraft delivered with a streaming system from day one, and in light of the volume of holders on the market. The available content was also severely lacking to the point that I question the system’s value. Six movies were loaded, as was a single episode of “How I Met Your Mother”. 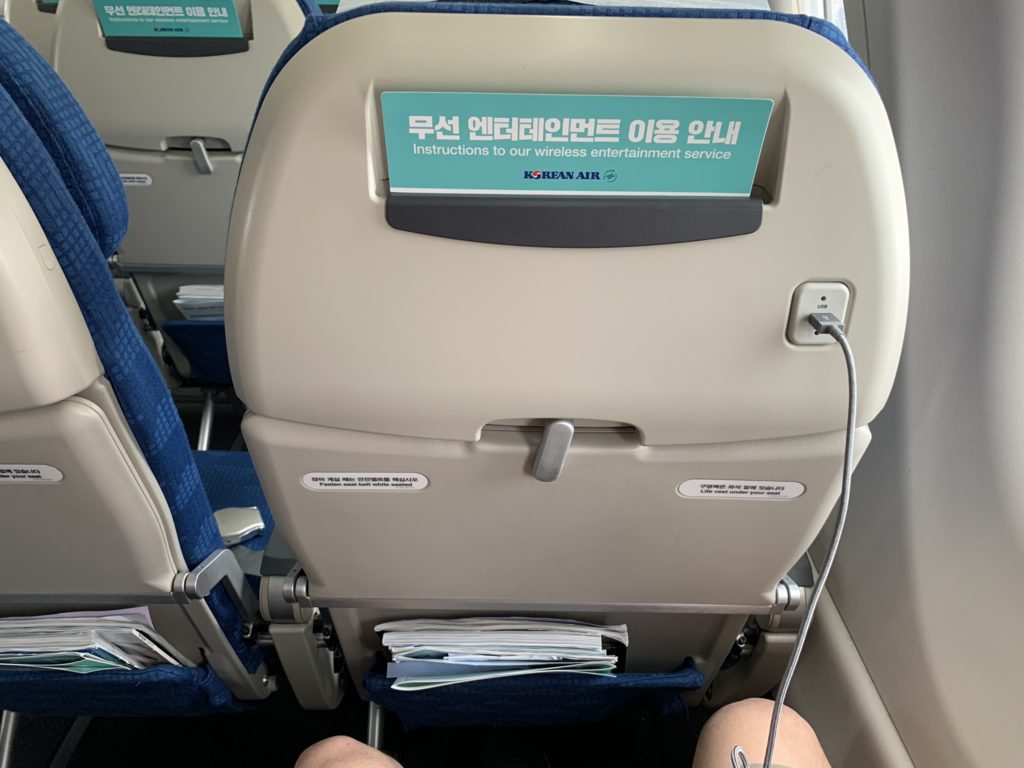 At least a moving map was available and working. Annoyingly, the app didn’t seem to be fully compatible with the iPhone X series, so the gesture bar remained fixed on the bottom of the screen rather than fading away as it normally does when video is playing.

While the Jin Air flight to Jeju Island offered a super quick but fully featured buy-on-board food and beverage service, Korean’s onboard service was quite a bit more limited. Jin Air and Korean are owned by the same parent company.

The options available on the Korean A220 seemed to be water, warm Coca Cola, or orange juice. That was it. If there was an option for additional items or to purchase a beer, it wasn’t made known to passengers. I much preferred the low-cost carrier (LCC) approach, where everything was offered for a fee but at least it was available.

At the end of the day on a one-hour flight on the world’s busiest route, differentiators such as streaming entertainment might not matter all that much (with that said, a growing number of business travelers on short-hop flights in the US want to be connected to the Internet).

What’s important is that I got where I needed to go on time and comfortably, which is something not all airlines on the route are able to deliver. I would happily choose to fly Korean’s A220 again, but I do wish the onboard service was enhanced at least a little bit. 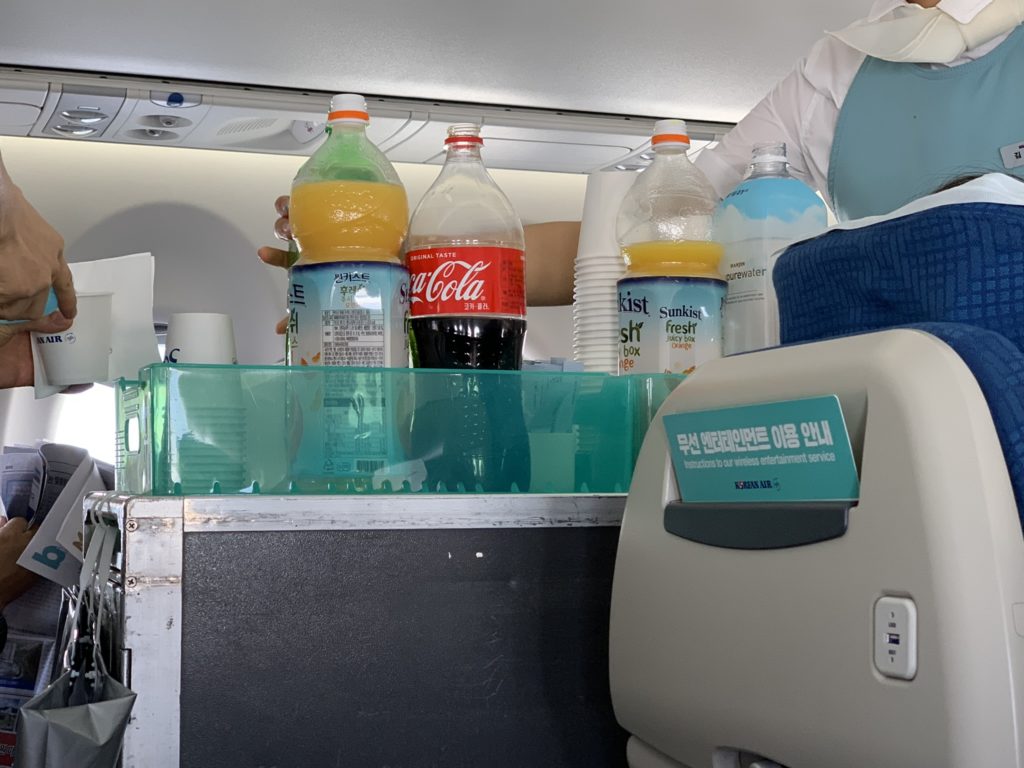