Just ahead of a Paris Air Show that looks to see an almost unprecedented amount of change in the regional aircraft sector, Mitsubishi Aircraft Corporation is renaming its Mitsubishi Regional Jet (MRJ) to Mitsubishi SpaceJet. At the same time, its future smaller variant, the MRJ70, is growing within the size allowed by US scope clauses and will be known as the M100, with the former MRJ90 now the M90 and the MRJ70 designation “now retired”. A new cabin with larger bins and the promise of inflight connectivity are also added to the program.

Seating 84 in a typical single-class seating at 31” pitch, and a maximum of 88 passengers at 29”, in the US market the M100 will seat 76 passengers in the usual two and a half class (domestic first, extra-legroom economy, regular economy) configuration. Mitsubishi suggests that might look like four rows of 1-2 first class seats, three rows of 2-2 extra-legroom economy, and thirteen rows of regular economy.

It’s a marked change for a manufacturer in the running to purchase Bombardier’s CRJ Series regional jet, and indeed the M100 is sized and shaped to be a key replacement for those aircraft in US service. Mitsubishi had previously been banking on changes to the scope clause permitting the MRJ90 in regional fleets that have not materialized. The airframer plans to launch the M100 program formally later this year, and head of global market strategy Steve Haro confirms to Runway Girl Network that entry into service is planned for 2023.

“Formal launch of the SpaceJet M100 program is expected later this year,” says the airframer.

Somewhat oddly, the new M100 fits between the old MRJ70 and 90. Image: Mitsubishi

There’s key movement on the cabin front, which had previously been in a type of stasis. Where the MRJ-era aircraft had relatively small flip-up bins that could take only relatively small bags — and side-on only — new imagery from Mitsubishi shows larger pivot bins that look set to accommodate substantially larger luggage and open up the overhead area. A reworked ceiling, a new pearlescent effect on the cabin sidewalls, and upgraded seats also feature. 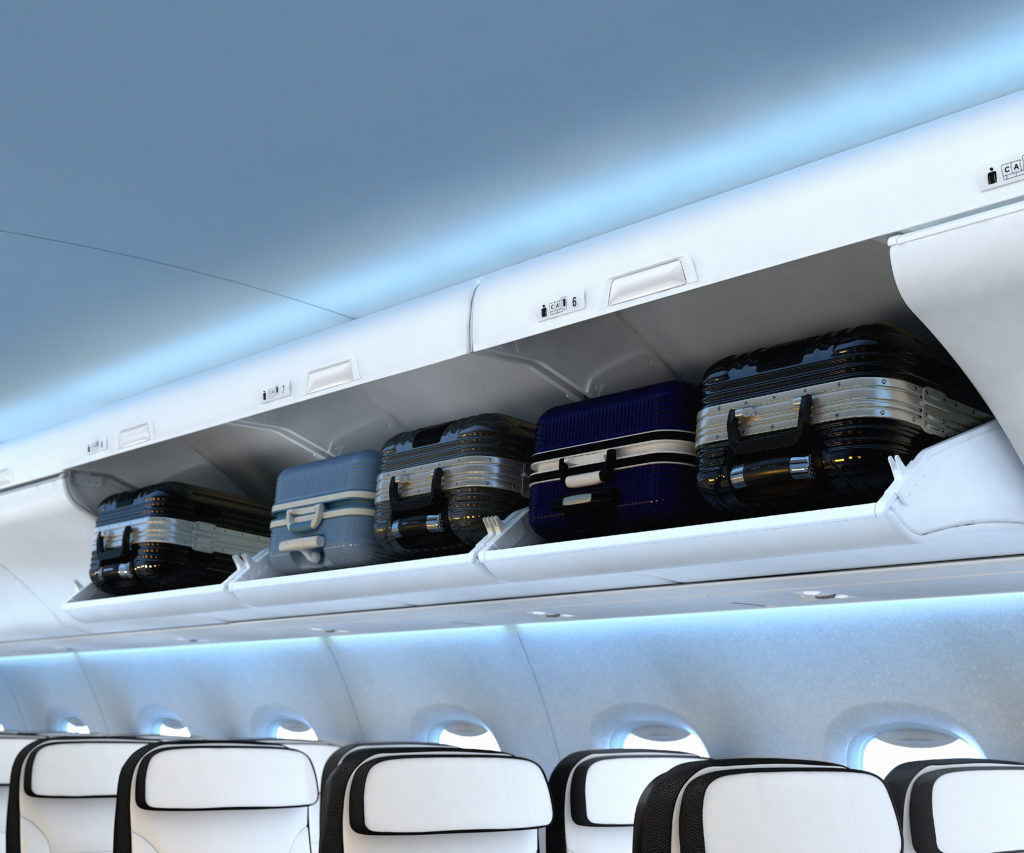 “We are still working with Safran, previously Zodiac Aerospace,” on the cabin and seats, says head of new program development Henry Tam. “We looked into the passenger experience and the operator experience. One of the key feedbacks we got over the last two years is that they want more carry-on bags on the aircraft. So when we looked at different configurations, at different options, we settled on the pivot bin because it would allow us to put rollerbags wheels first to accommodate as many rollerbags on board as possible.” 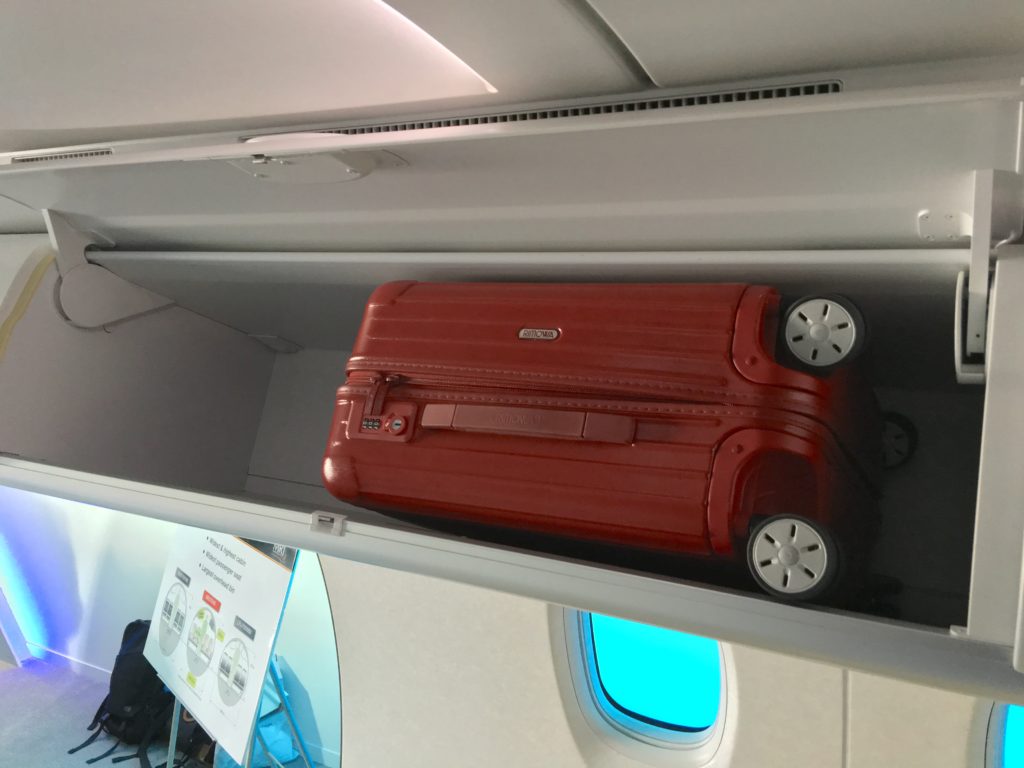 When asked whether these were based on Safran’s ECOS design, Tam notes that, “I’m not too familiar with the detailed naming of the previous Zodiac bins, but we have been working with them for the past year to design and fine-tune these bins.”

Mitsubishi is also on the hunt for new seats, Tam says. “We are putting the existing Safran seats into the mockup, but we are actually looking for new seats to improve the comfort and the customer experience, so we have not made any new selection at this stage, but we are looking for better alternatives and opportunities.”

“For the M100 what we don’t want to do is lock ourselves in” before the 2023 EIS, says Mitsubishi marketeer Haro. “As you know, this area — wifi and connectivity — about every eighteen months has a step-change in performance. There’s many things that are on the table right now.”

In terms of satellite connectivity, Haro says, “Right now we’re obviously provisioned for Ka, Ku, which are the current standard. What Viasat and others that are out there are doing is that there are the low earth orbit satellite systems they are putting up. Our difference is that we’d have a lower profile antenna: right now it’s phased array, but there could be new technologies that are flat panel, that are going to be much more lower profile, less drag, that allows us the ability to take advantage of the latest satellites that are going up.”

Notably, Mitsubishi is not looking at the current generation of antennas and radomes for the M100. “Today we have mechanically steered antennas, which are very protrusive and heavy. You have to have a lot of structure around that. We’ve eliminated that as an option for our M100 aircraft. It’s going to be flat panel. It could be phased array technology, but it could be something else. For sure there are several things out there that are in work that we’re looking at,” Haro says.

The systems architecture, too, is still in motion, Henry Tam explains. “When we design the system architecture for the CMS and the IFEC, we’re trying to have an agnostic architecture so that it’ll be very easy to put different systems on. It’ll be very upgradeable, and we can try to make it as plug and play as possible with any of the providers.” 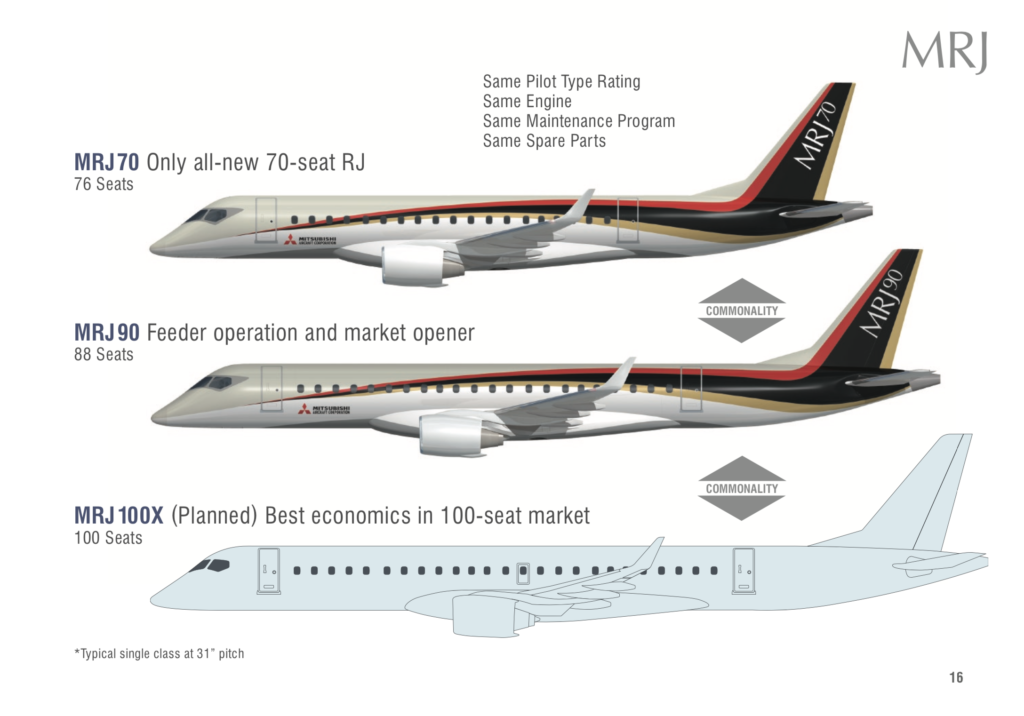 “What we see is that the M100 has quite a bit of flexibility and can be very efficient between 65 seats all the way up to 84 seats and even 88 seats in a European high-density configuration,” Haro says. “Really, the M100 is designed optimized around that North American three-class configuration around 76 seats. The M90 looks like really a good option for more the international market outside the US. It also has a larger cargo area, which some operators take advantage of. It’s up to the individual airline needs, and it’s aligning the right product to the need of that particular customer.”

(It’s not clear how Mitsubishi expects to resolve the issue of the M90 aircraft code already being assigned to the McDonnell Douglas MD-90, however.)

The 76-seat M100 scope clause sizing is crucial since the vast majority of the orders and options of for the aircraft are from US regional airlines that operate as “express” or “connection” carriers. Its maximum range will be 1910nm, which in the US context would permit flights from LAX to far western Pennsylvania or halfway across North and South Carolina. That’s slightly less than the standard specification of the MRJ70, but that aircraft offered extra-range ER and LR options boosting it to 3090 and 3740nm, respectively.

The M100 base model’s range from Los Angeles will get it most of — but not all — the way across the US. Image – Great Circle Mapper

With the scope clauses restricting the size of regional jets in the United States, the market for this class of aircraft has been significantly distorted. It will be interesting to see whether the M100 version of the SpaceJet secures additional orders from outside the United States at Le Bourget this week. Both its max-pax 29” and “typical” 31” all-economy layouts seat just four passengers fewer than the numbers previously given for the MRJ90.

Mitsubishi is also studying a further stretch of the SpaceJet. While 76 seats is the sweet spot for the US thanks to the scope clause, the international niche is, Haro and Tam confirmed, around the flight attendant to passenger ratio of 1:50.

Chuckling about potential confusion with the previous MRJ100X stretch, Haro noted that, “now we’re looking at what’s beyond the M100, and that is something up to 100 seats. We have product development studies going on right now, and we haven’t defined yet because we’re still out talking to customers exactly what that market niche is, but we realize it’s going to be something slightly larger than the M100.” 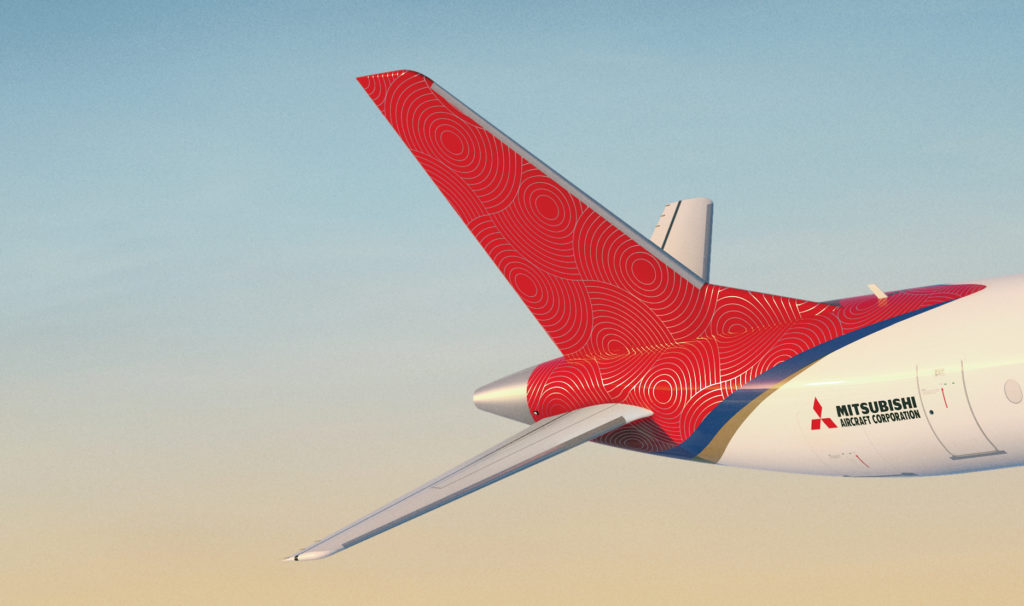 The MRJ to SpaceJet transition comes with a new livery, including an attractive metallic tailfin. Image: Mitsubishi

Travelport exec on why education is key to achieving industry diversity