Just over a year ago, I was impressed by the IAG low-cost carrier Vueling’s Eurobusiness seating, sold as its “Excellence” fares. But with recent changes by the LCC that killed Excellence and replaced it with two new ticket options — Family and TimeFlex — has Vueling got better or worse for business travelers and premium leisure passengers? I tried it out on one of Vueling’s longer routes on a return trip between Lyon and Gran Canaria, one of the airline’s longer routes.

Vueling also offers four seat buy-up options: Space One in the front row, Space Plus with extra legroom in rows 2-4, Space in the exit rows, and the “front and back rows” that allow easy-off (in the case of that back rows, that’s only in the event that a rear set of stairs is used). 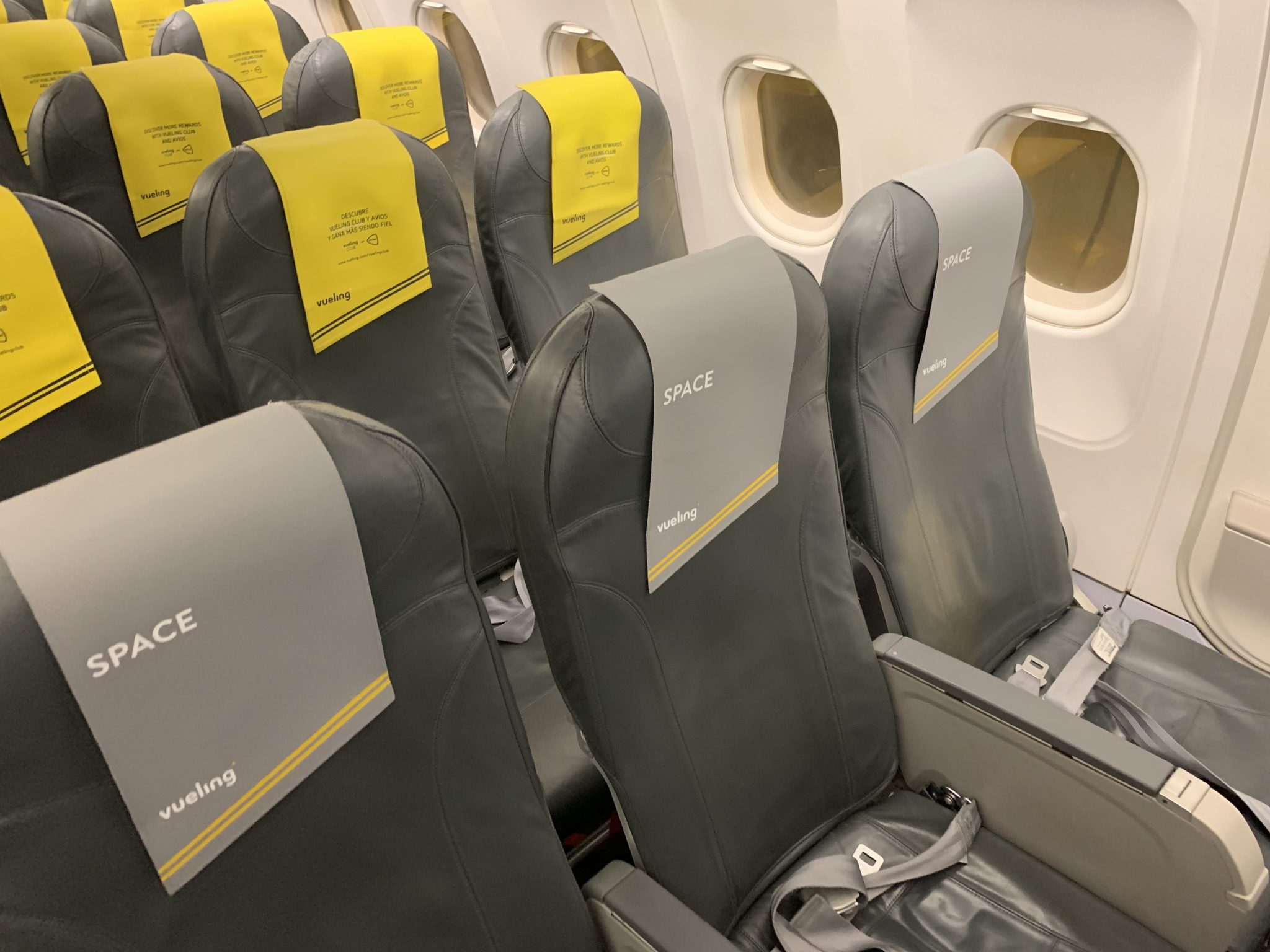 When I flew, the Family fare was not offered as an option, so I chose Optima on the outbound and TimeFlex on the return, since I was checking a bag. The TimeFlex pricing premium was only five euros over Family on the return, and I was traveling with older family members who appreciated the flexibility and airport fast-track. (That was well worth it: there was no checkin queue at Lyon on the outbound, but the line at Gran Canaria was immense.) 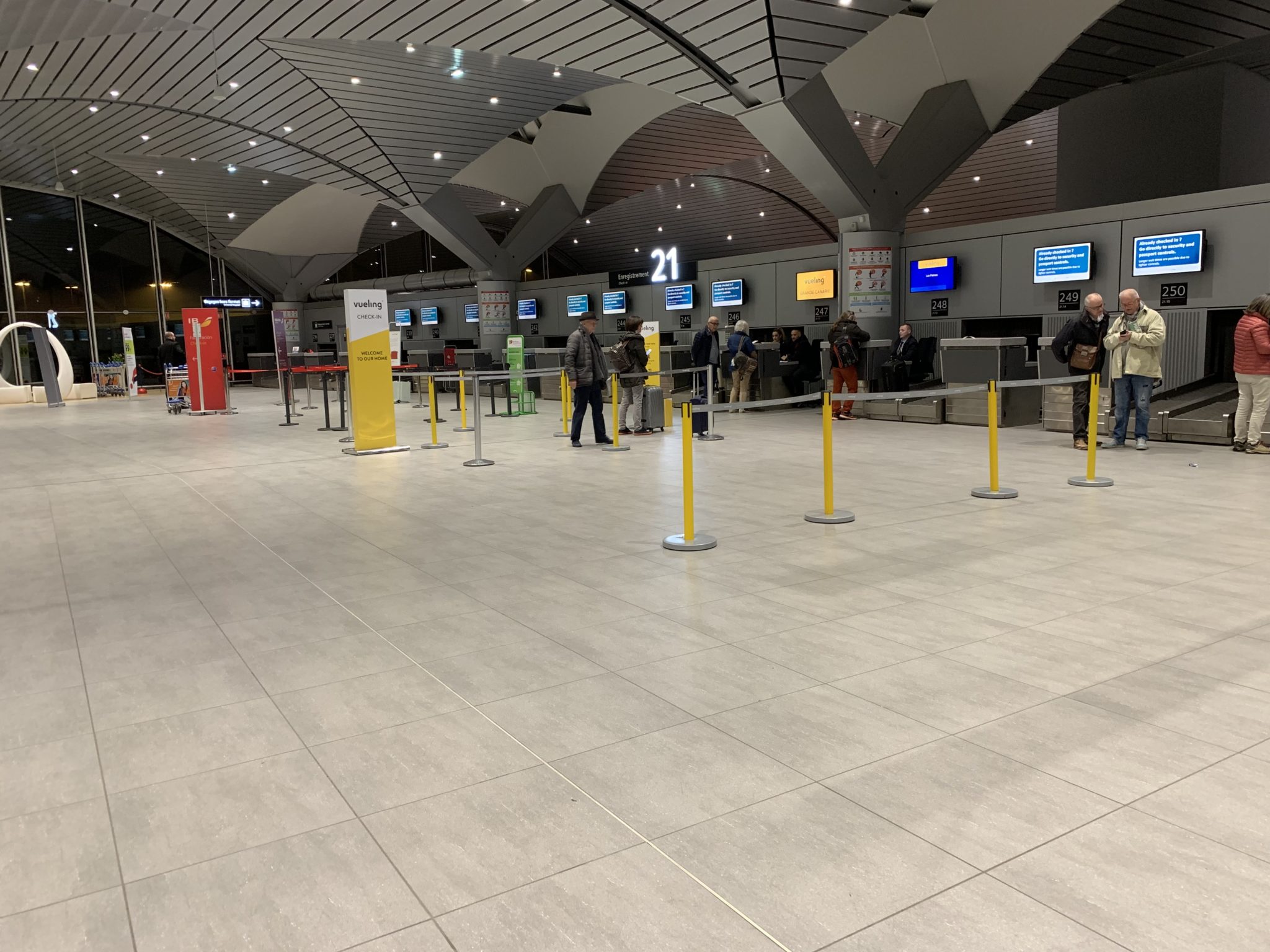 Checkin at an empty Lyon airport was queueless and easy. Image: John Walton

I also chose an extra seat both ways on these 3h30m flights: as a 6’3”/190cm traveller built for comfort rather than speed, I appreciate a bit of extra space and the ability to pop my own carryon under the spare seat, and given that the flights themselves were very cheap — 55€ one way, 99€ the other — I thought it good value and would do it again.

Checkin, however, was interestingly varied. At Lyon, the agent had seemingly never seen someone booking an extra seat, and so called over a colleague, with a lot of rather Gallic shrugging and an upgrade of my pair of seats in row 26 to blocking off half of row 15 but issuing me a single boarding pass. At Las Palmas, by contrast, the process was less confusing to the agent, but I was issued two boarding passes, although only one of the stubs was taken at boarding. Consistency in this area for passenger expectations would be smart.

At Lyon, I didn’t miss the lounge access, mostly for the reason that none was available last year with Excellence, but also since the airport’s lounges are uniformly uninspiring, especially in the older Terminal 2 that Vueling uses. At Las Palmas, the outdoor beer terrace proved an equal greater draw to the relatively unimpressive lounge.

Priority boarding on the return flight was offered but entirely unhelpful since it was a bus gate.

On the outbound flight, I was surprised that the older Vueling seat ended up being quite comfortable, even in a regular legroom row, although I was very glad to have bought the second seat to be able to change position frequently and to not have a neighbour’s elbows in my side. 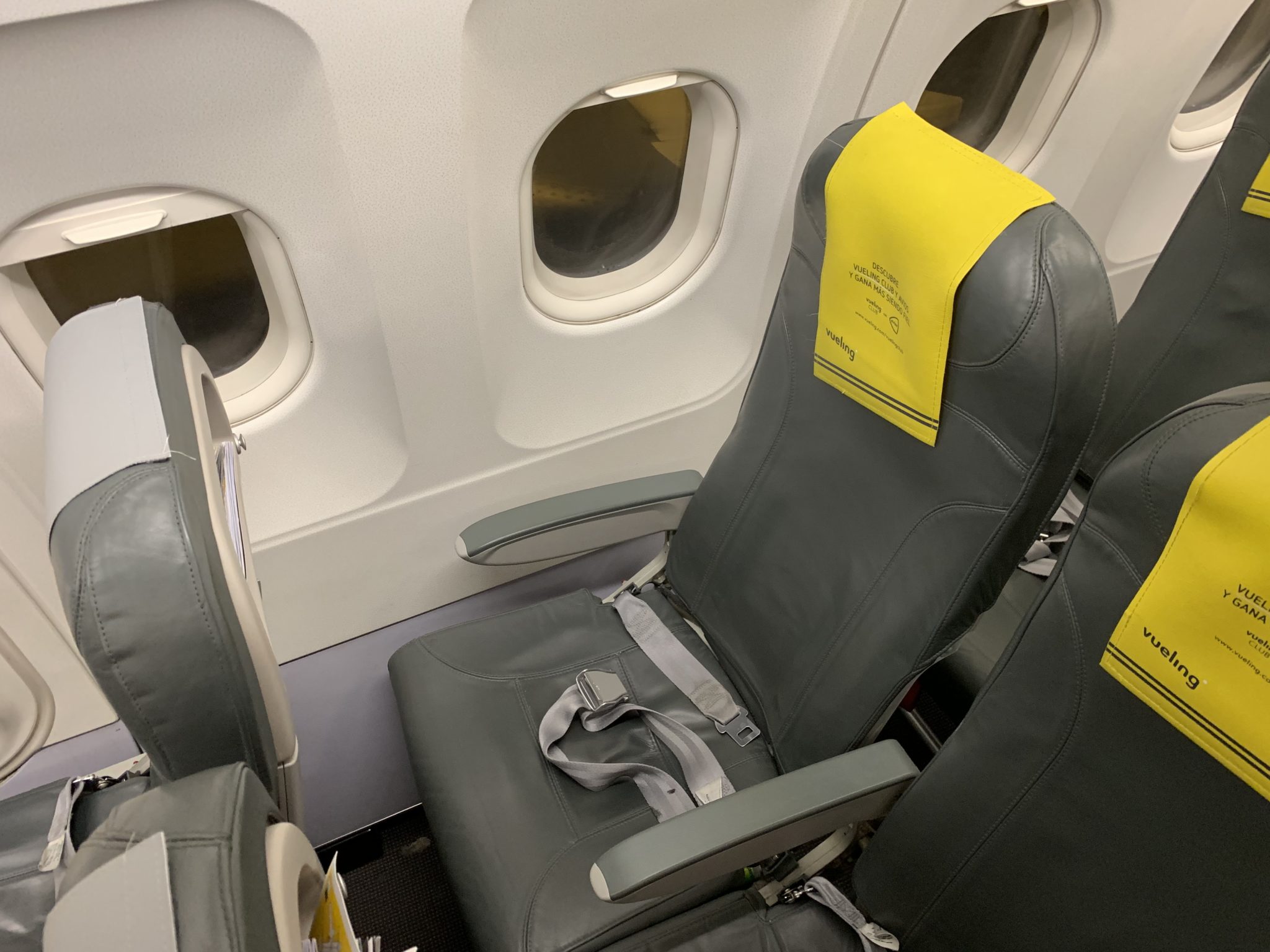 Overall, the older seats were more comfortable for this long flight, but the legroom tradeoff is worth it for the newer ones. Image: John Walton

On the return, the newer seat, which I believe is the Recaro SL3510, was less comfortable to sit in, and I also missed the strap-on headrests in row 1 from the Excellence days. A rolled-up jumper did the trick, though. At-seat power was very welcome on the return flight, but it doesn’t seem like there’s any way to predict whether you can rely on it. 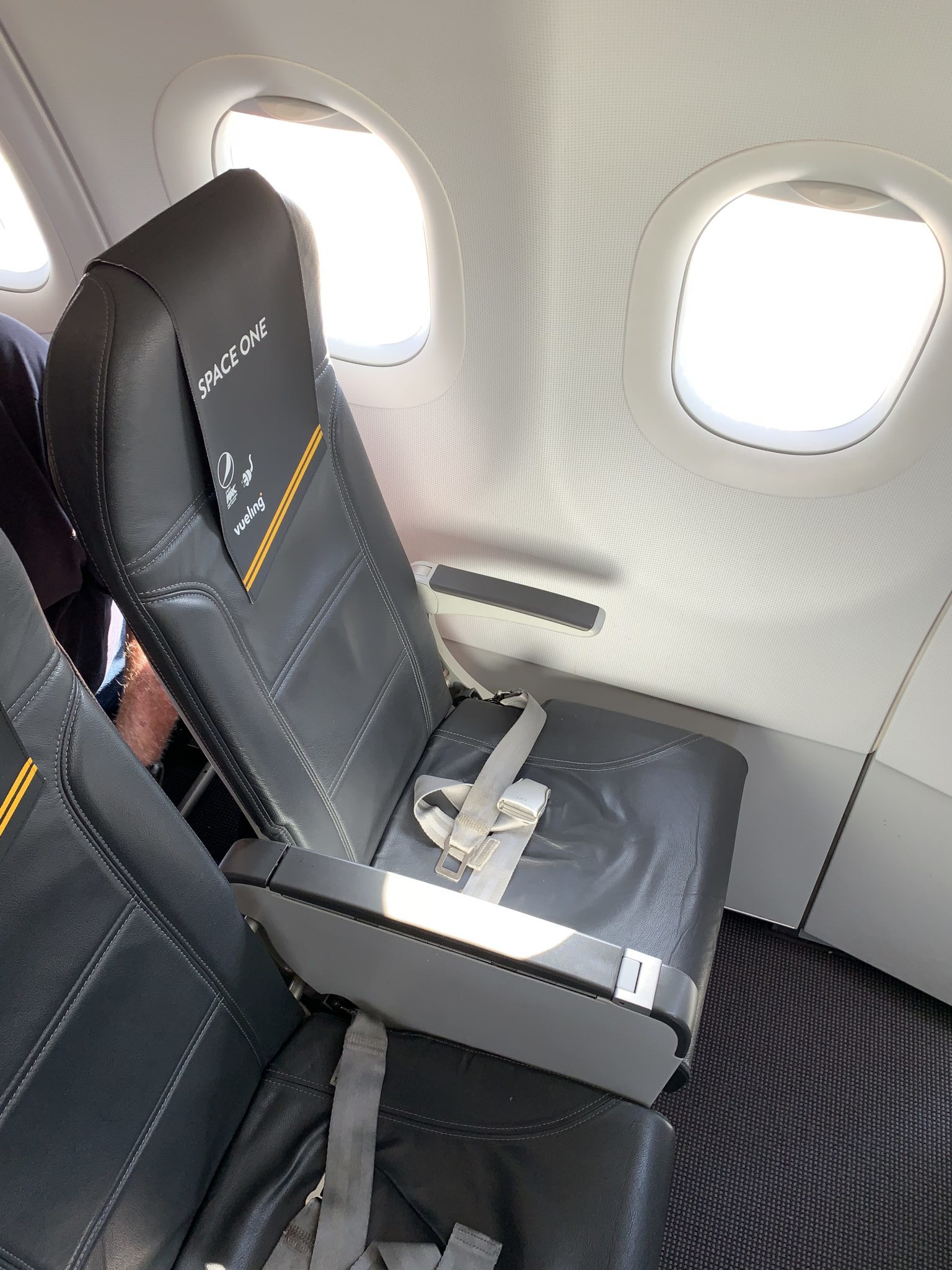 The last difference between Excellence and the “buy yourself an extra seat” option was the onboard meal. Vueling’s food has never been exactly exciting, although the sandwiches are fine. Frankly, given the non-mealtime flight departure times, forking out 6€ for a bottle of reasonable Cava wasn’t a big loss, and an extra few euros for the sandwich package wouldn’t have broken the bank. 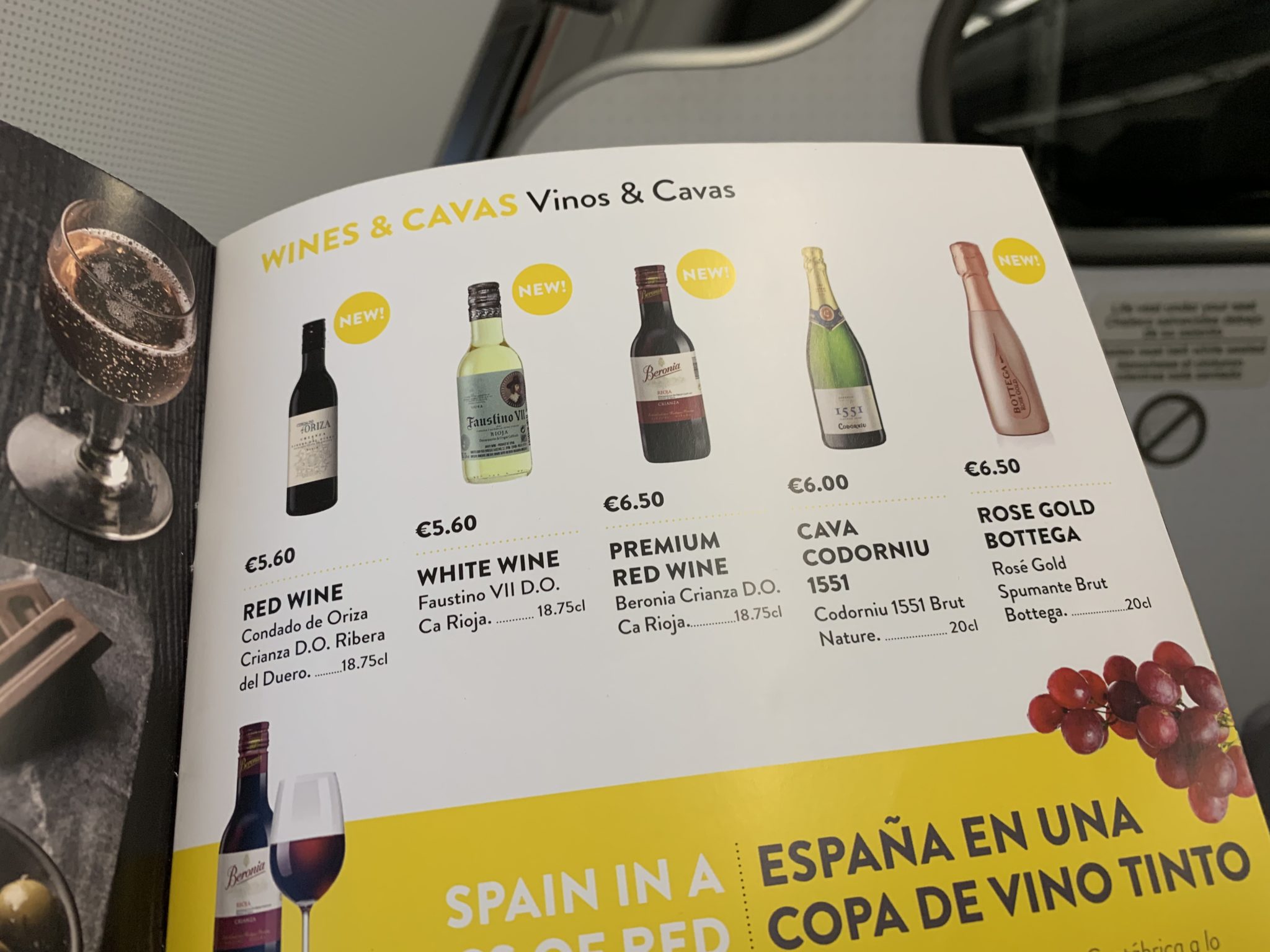 Inflight, it was typical Vueling: inconsistently grumpy. The flight attendants on the outbound were efficient and passed through regularly with the trolleys, but on the return even my low expectations weren’t poor enough. The crew blocked row 1 passengers’ luggage with their own rollaboards, which could easily have been stowed at the back of the plane. Their language skills were poor, with no French on this route to France. They were hostile throughout, snapping at passengers who were waiting for the lavatory to stand behind the line of the bulkhead wall even when there was no crewmember sitting in the jumpseats nor any trolley preparation going on. This seems to be an ongoing problem with Vueling, and it’s not a pleasant experience.

Overall, though, do I miss the Excellence fares? Not really, although that depends on pricing: I never saw Excellence for twice the price of the base seat fare, but the calculations are subjective. Which are the most important parts of a Eurobusiness fare: the seat, the extra legroom, the free food & drink, the airport experience, the baggage, or something else? That answer will vary for every passenger, and it will be interesting to see how Vueling’s offer evolves over time. 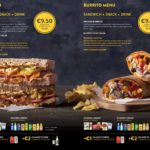 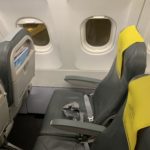 On my outbound flight, I picked row 15 to try out the pitch. Image: John Walton 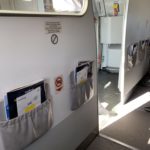 On balance, I’d pick the bulkhead seating again, despite the unfortunate lack of cutouts for feet. Image: John Walton 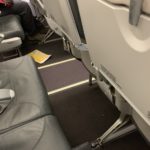 Legroom was surprisingly not terrible, though of course the extra seat helped. Image: John Walton 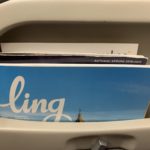 IFE on board both flights was limited to “ling”. Image: John Walton 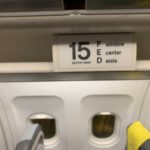 I chose to sit behind the wing on the outbound to truly try out the seat pitch towards the rear of the aircraft. Image: John Walton 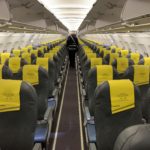 “Blah Airlines” could have been modelled on Vueling’s cabins. Image – John Walton

Closing doors in business while opening windows in other cabins