Whether business or holiday, all over the world, more and more people are travelling by plane. But cramped seating and always the same, tedious grey cabins are taking the magic out of travelling by air.

It doesn’t have to be this way, though, as the Crystal Cabin Award shows. The award for aircraft cabin innovations and on-board products is the sector’s most highly regarded honour amongst media and the industry alike, and it is being presented for the 13th time in 2019. This year’s field impressively demonstrates that there is no shortage of fresh ideas. For the first time, more than 100 submissions were received from all over the world. 94 concepts from 22 countries made it to the shortlist — a new record for the sixth year running.

Entrants include airlines, suppliers, universities and major aircraft manufacturers — put simply, a who’s who of the industry. The international expert jury, gathering at Aircraft Interiors Expo, the world’s leading trade show, in Hamburg, will decide just who gets to raise the aviation industry’s most coveted trophies this year.

Turning First Class into a suite: a place of your own with a virtual view

The magic of air travel is still, of course, a question of money. If you have the means, you can fly more exclusively now than ever before. The new First Class Private Suites on the Emirates Boeing 777 prove the point. As separate compartments, they shield passengers from the rest of the cabin, lending the whole experience the feeling of a private jet. And personnel can be summoned by video call at any time. That’s not all that technology is achieving here, either. Thanks to high-resolution real-time wall monitors, even the internal cabins have an unobstructed window view — something no other internal cabin can offer. 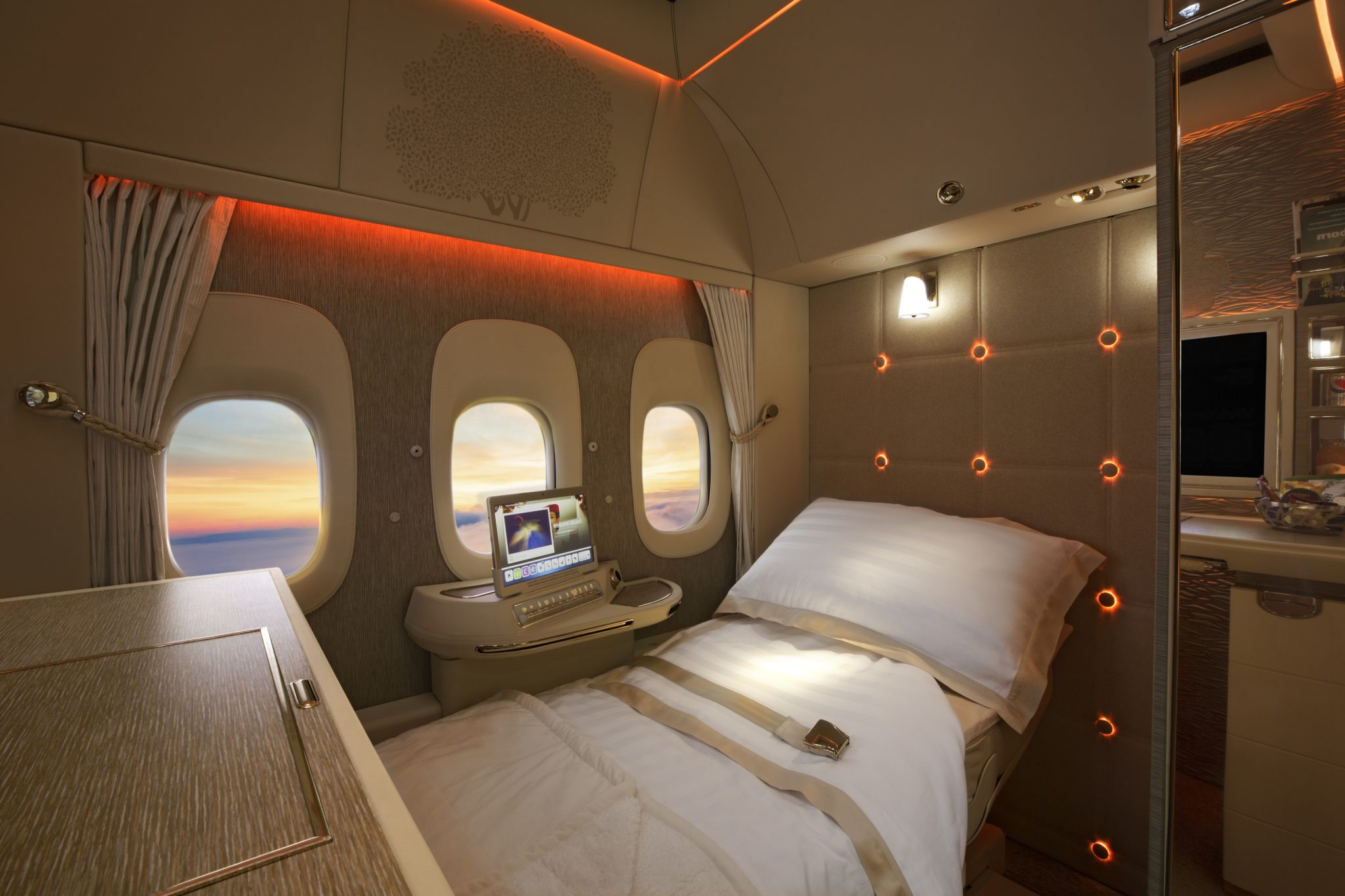 And despite such high-end ideas as the Emirates suites, less and less long-haul flights are offering First Class. The focus is increasingly shifting to Business Class. Here, too, the trend to privacy and separation can be seen. Meetings and full calendars are sapping people’s energy, so that business passengers are more interested in calm and relaxation than in luxury when they fly. A good example of how the industry is responding can be seen on the shortlisted entries from Panasonic. The technology company has equipped a Business Class sleeper seat with a partition that not only absorbs noise but can also play calming music or the sound of rainfall if the passengers wishes, accompanied by appropriate mood lighting. And the nanoe air filtration system extracts pungent smells from the Business Class cabin, for example after meals, improving the air in the cabin.

There’s good news for “cattle class” passengers, too, with plenty of shortlisted ideas for the Crystal Cabin Award aimed at making Economy travel more pleasant. The spectrum ranges from ergonomically adjustable long-haul seats from Recaro to a self-service counter for snacks and drinks from Collins Aerospace. The trick with this solution, called “Flex Duet”, is that it can be folded out from partitions in front of the aircraft door during flight, giving a purpose to otherwise wasted space. Also rethinking confined spaces is north Germany’s Krüger Aviation with its Future Lavatory. The new toilet cabin concept requires the same amount of space as conventional aircraft lavatories but is much easier to use and includes a baby change table with animated animal figures and an extra seating area for getting changed before landing. 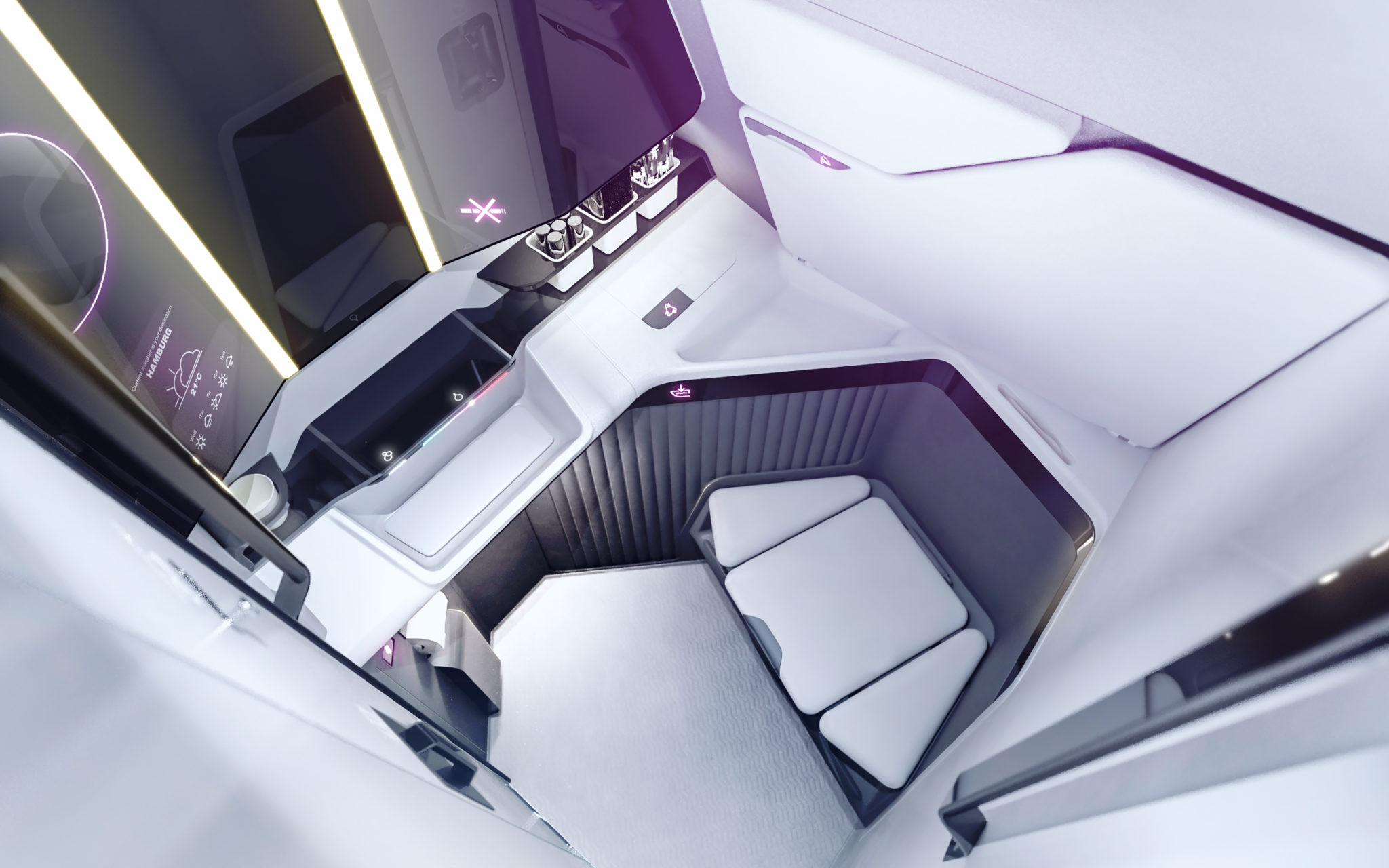 Ushering in the classless society: revolutionary ideas for air travel

The different cabin classes have been around for decades, but they are far from an inviolable law of nature. As a number of submissions in this year’s shortlist show, it’s possible to revolutionalise the way we imagine the cabin layout. The most radical idea comes from a student at Korea’s Hongik University, working in collaboration with seat manufacturer Adient. Called “1 for all”, it interweaves the various seat classes to achieve the maximum possible use of space. First Class and Economy passengers may find themselves next to one another or even above or below one another. A contrasting concept bringing passengers together is the Ultraflex-Zone from AIM Altitude, a response to the trend towards ultra-long-haul routes such as London-Australia. Passengers of all classes can use the snack bar, relax in lounge chairs, work on a presentation at a laptop workstation or do something for their physical comfort in the yoga zone. 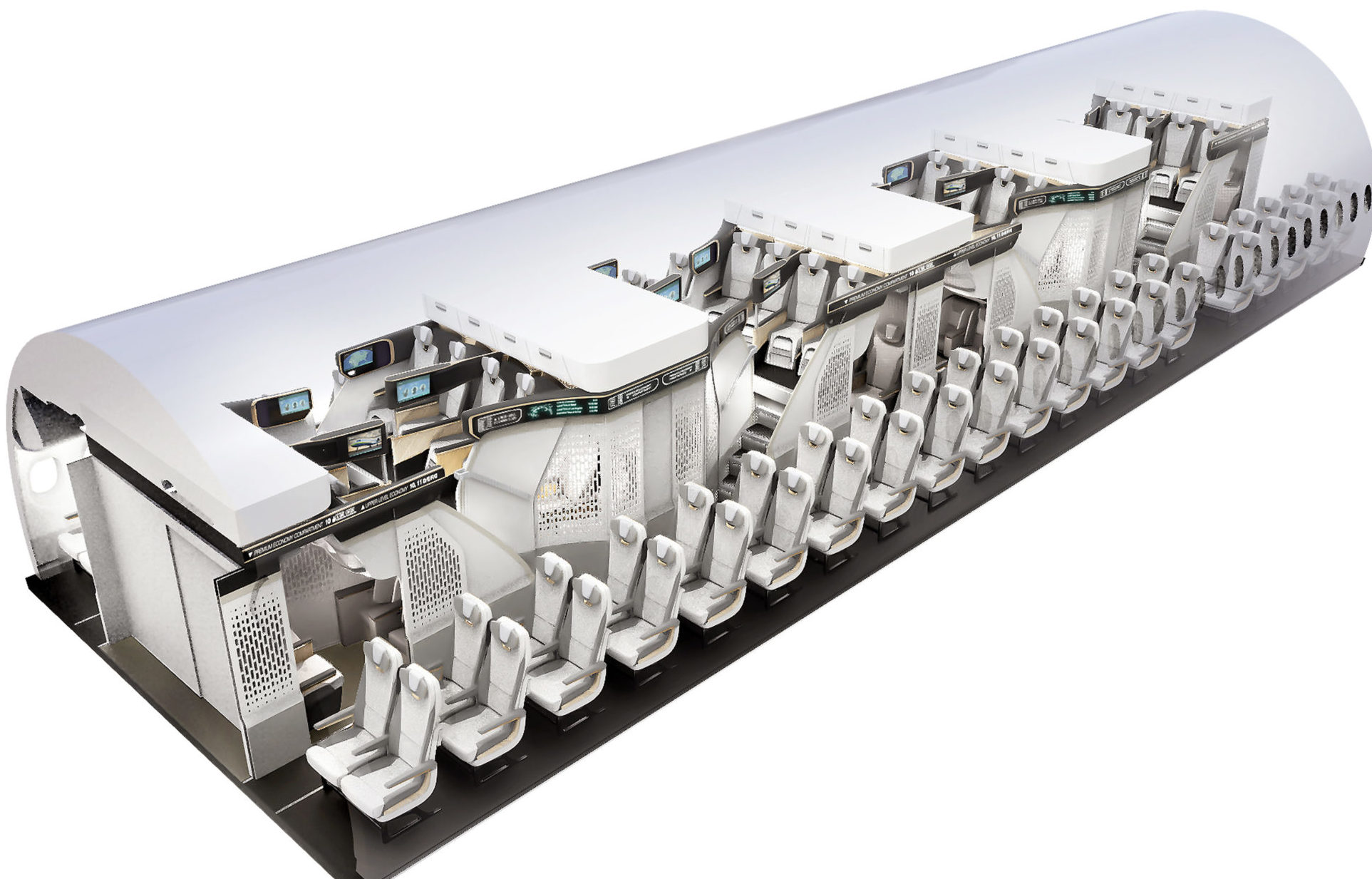 Aviation as a climate villain? Sustainability concepts for air travel

It’s not only the passengers that the Crystal Cabin Award wants to look after. The industry is also exploring ways to achieve lasting reductions in the CO2 footprint to lower the impact on the environment. Sometimes, it’s as simple as the amount of drinking water being taken. The tanks are often filled to the brim even for a short hop, which in turn increases the fuel consumption. Canadian company International Water Guard has developed a system allowing crew to check the fill level in a matter of seconds while on the ground, and to specify the refill level in five percent steps. Supplier Safran wants to save weight, too. The “Essential” sleeper seat for Business Class has no heavy mechanical components at all, relying instead on innovative cushion forms. The result: 25 percent less weight and almost 20 percent more space for the passenger. 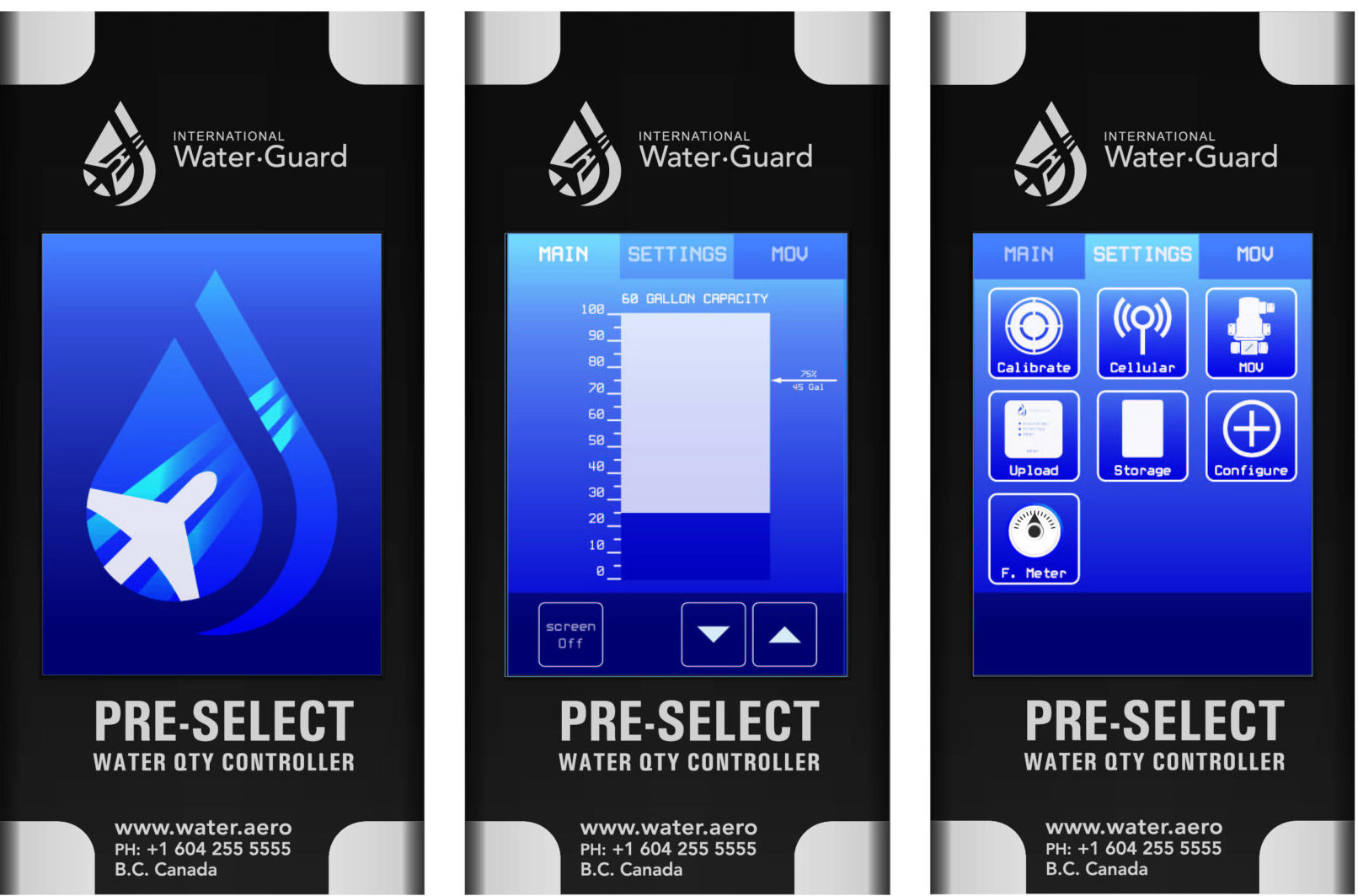 These days, almost every passenger has a smartphone with them. This opens up whole new possibilities for airlines and service providers, as demonstrated by a concept from the University of Cincinatti: Instead of eating aircraft meals, passengers can use their smartphones to order a meal from one of the restaurants at the departure airport. The meal is delivered to the airport at the gate and served hot during the flight — in an environmentally friendly cardboard box, of course. Smartphone technology can be used for health and comfort on long-haul flights, too. ACM shows the way with its SMEATED app. Sensors in the seat continuously monitor the passenger’s posture and alert the app if there is a danger of back problems after landing. The app then advises the passenger on how to sit more ergonomically.

Personalised on-board entertainment: flying in the age of Netflix

Another trend in the current Crystal Cabin Award season is personalised in-flight entertainment (IFE) systems. One of the pioneers is myKrisworld from Singapore Airlines, almost as userfriendly as a streaming service. Passengers changing flights in Singapore, for example, but continuing with the airline, can resume a film or series where they left off on the previous flight. The RAVE-Ultra system from Safran, meanwhile, offers an ultra-HD monitor and the highest levels of bluetooth compatibility. At long last, in-flight viewing is like a home cinema. 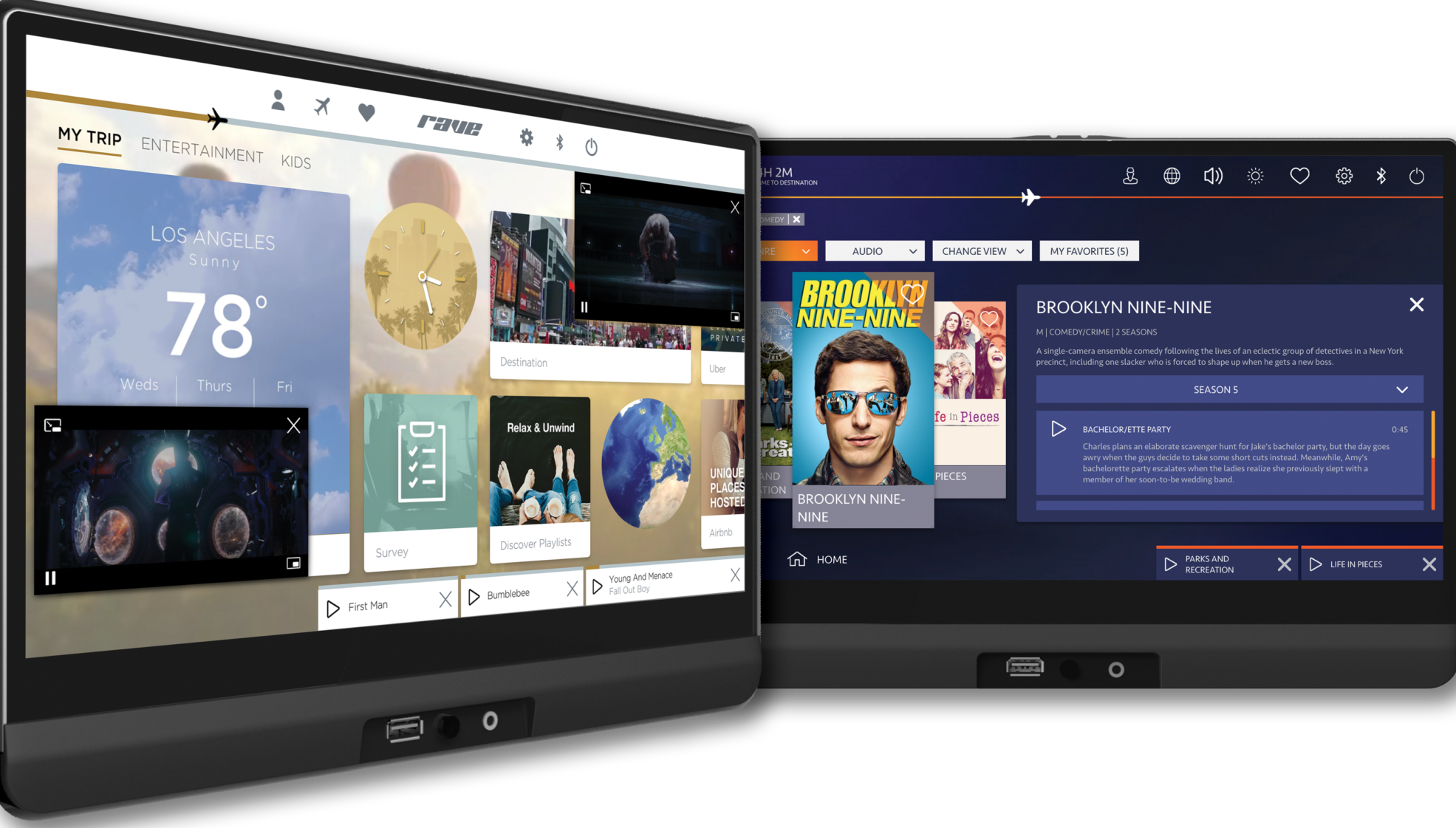 This year’s Crystal Cabin Award and its eight categories

The Crystal Cabin Award, an initiative of cluster Hamburg Aviation, is presented in eight categories: “Cabin Concepts”, “Cabin Systems”, “Inflight Entertainment and Connectivity”, “Greener Cabin, Health, Safety and Environment”, “Material & Components”, “Passenger Comfort Hardware”, “University” and “Visionary Concepts”. For each category, the 27 expert members of the jury select three finalists, announced at the beginning of March. The finalists get to pitch their concepts to the jury in person at the world’s leading trade show for aircraft cabins, the Aircraft Interiors Expo (2 – 4 April in Hamburg). The winners of the 2019 Crystal Cabin Award will be announced and at a gala dinner in Hamburg on the evening of 2 April. For the first time in its history, the prize ceremony will take place in the trading floor hall of the Hamburg Chamber of Commerce.