Cathay Pacific is taking a multi-pronged approach to continuing the development of its onboard soft product, with the revamped business class catering model already seeing benefits of the carrier’s use of both technical advancements and a pioneer group strategy to engaging cabin crew.

The benefits of moving to a hybrid on-demand model (a structured first meal and on-demand service thereafter) are wide-ranging. Cathay Pacific has seen a dramatic increase in service speed on board, a significant cut to the amount of time needed to train crew and the opportunity to plug in big data to learn more about passengers and their preferences.

Previously, the airline would have expected a major service change like a catering concept revamp to take four years in training, switching over routes progressively as crew learned how to carry out the new service style to avoid what general manager customer experience and design Vivian Lo jokes would be “operational hell”.

Getting Cathay Pacific’s people on board with the new plan — and quickly — was the first step. “With the way we’ve structured the current service, we’ve responded a lot to what the crew was saying in terms of difficulty: simplifying complexities of equipment, platings, etc. We will be able to complete all crew training within a year to a year-and-a-half,” Lo explains to Runway Girl Network.

The key? “You start with a pool of volunteers, a strong, very engaged and committed pioneer group,” Lo says. “You train them very well, launch the service and trial until you’re comfortable, then you scale up the training.” 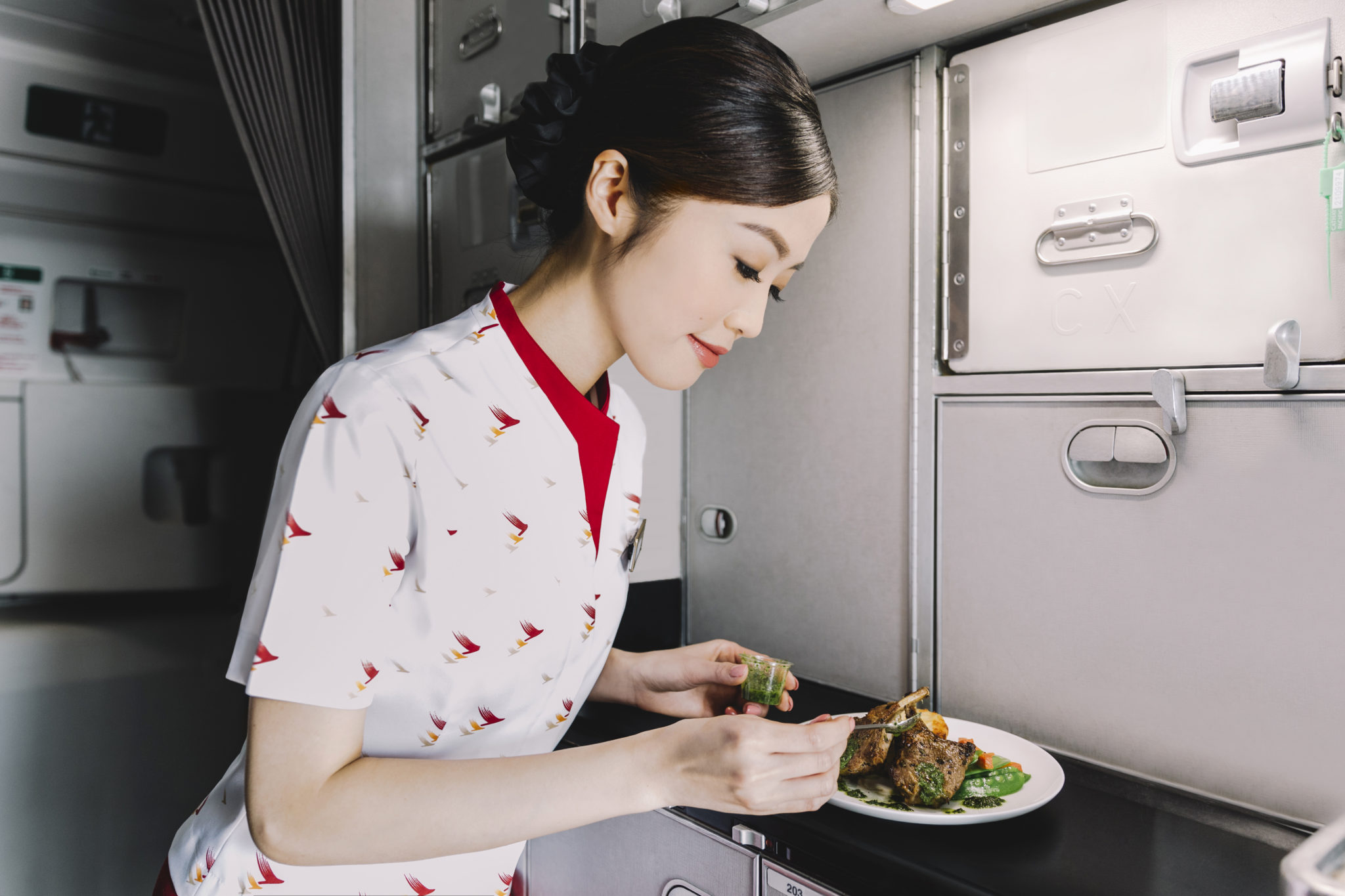 Getting the crew started with production and plating as soon as possible is a big plus. Image: Cathay Pacific

Some of that adaptation includes feedback and an iteration of the concept, including where something might be too complicated or not working properly. Rapid feedback to Lo’s team enables changes to be made much more swiftly than in the past.

“Obviously, in that ramping up stage you will inevitably start to have people who are serving – on that flight – the new service for the first time. So you’ll see very good service and then a little bit of learning, and a lot of adaptation from our side.” As an example, Lo says, Cathay Pacific is increasing its collaboration with catering and inflight services.

“Once, when we launched with a particular port, the mashed potato was a bit sloppy, or they have understated the portion. In the past it would take a long time for that to be fed back to us. We actually managed to catch that within the first few days, and addressed the caterer issues.” 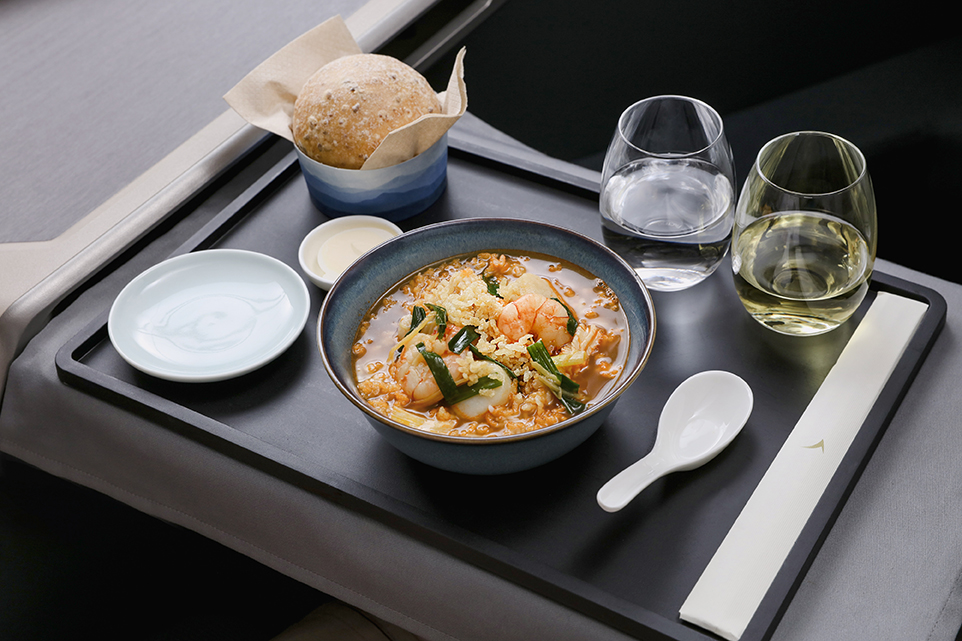 Another example: when Lo’s team designed the new Hong Kong favorites line, the char siu pork with noodles was very popular, while a pumpkin curry was beloved by the team but ordered less by passengers. Feedback and data from the pioneer group allowed the team to speedily adjust the loading scale of these two dishes to meet demand. 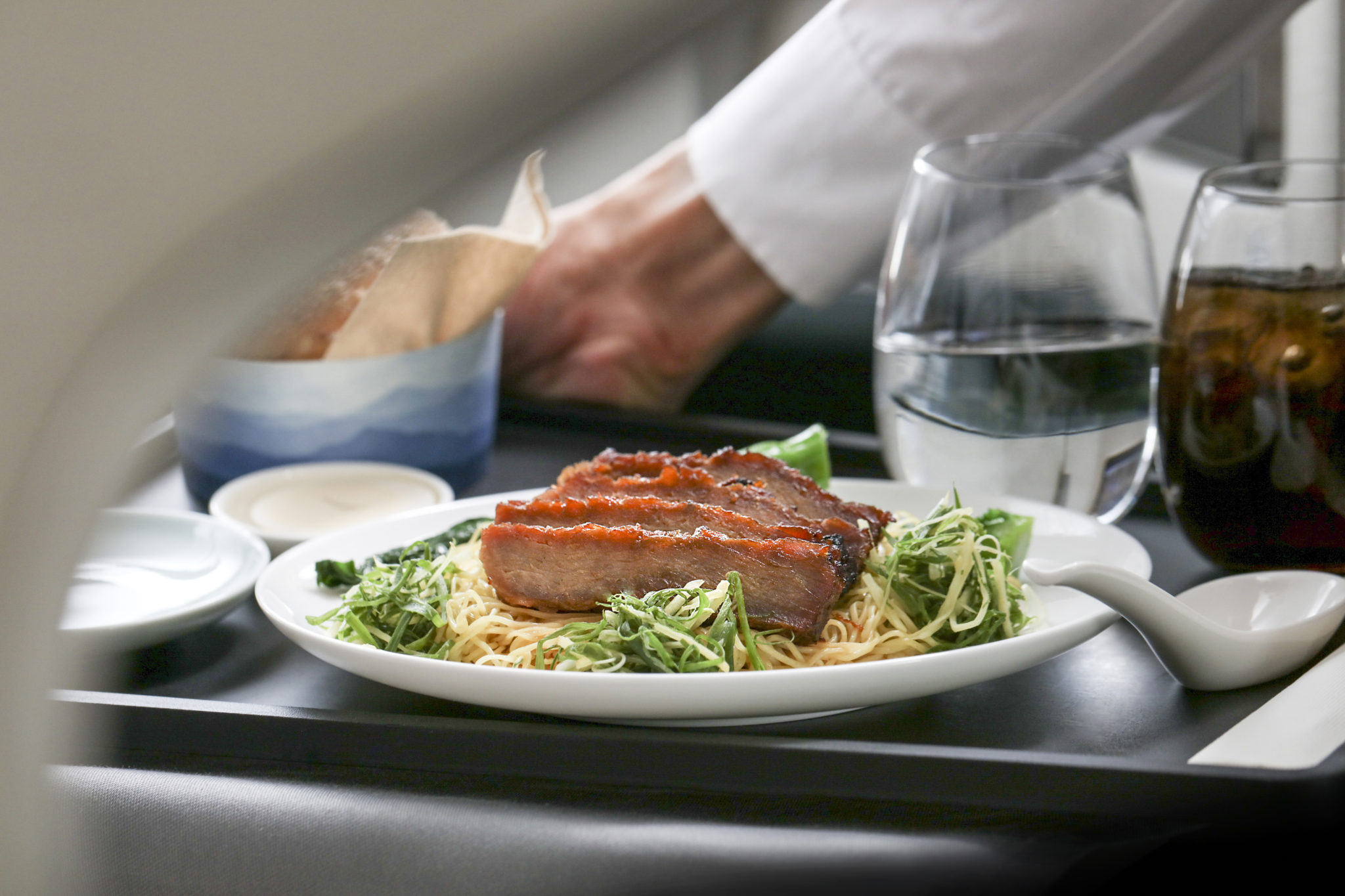 That feedback and data is increasingly digitalized thanks to work that Cathay Pacific is doing with Apple to start onboard ordering via iOS devices.

“We used to assume that this can only be done when we have connectivity for all the fleet, but we managed to find out that we can achieve that even with peer-to-peer kind of communication. We’ve been working with Apple in terms of the prototypes, so the crew can take the orders. The tablet in the galley receives the order and [the galley crew] start doing plating and preparation.” 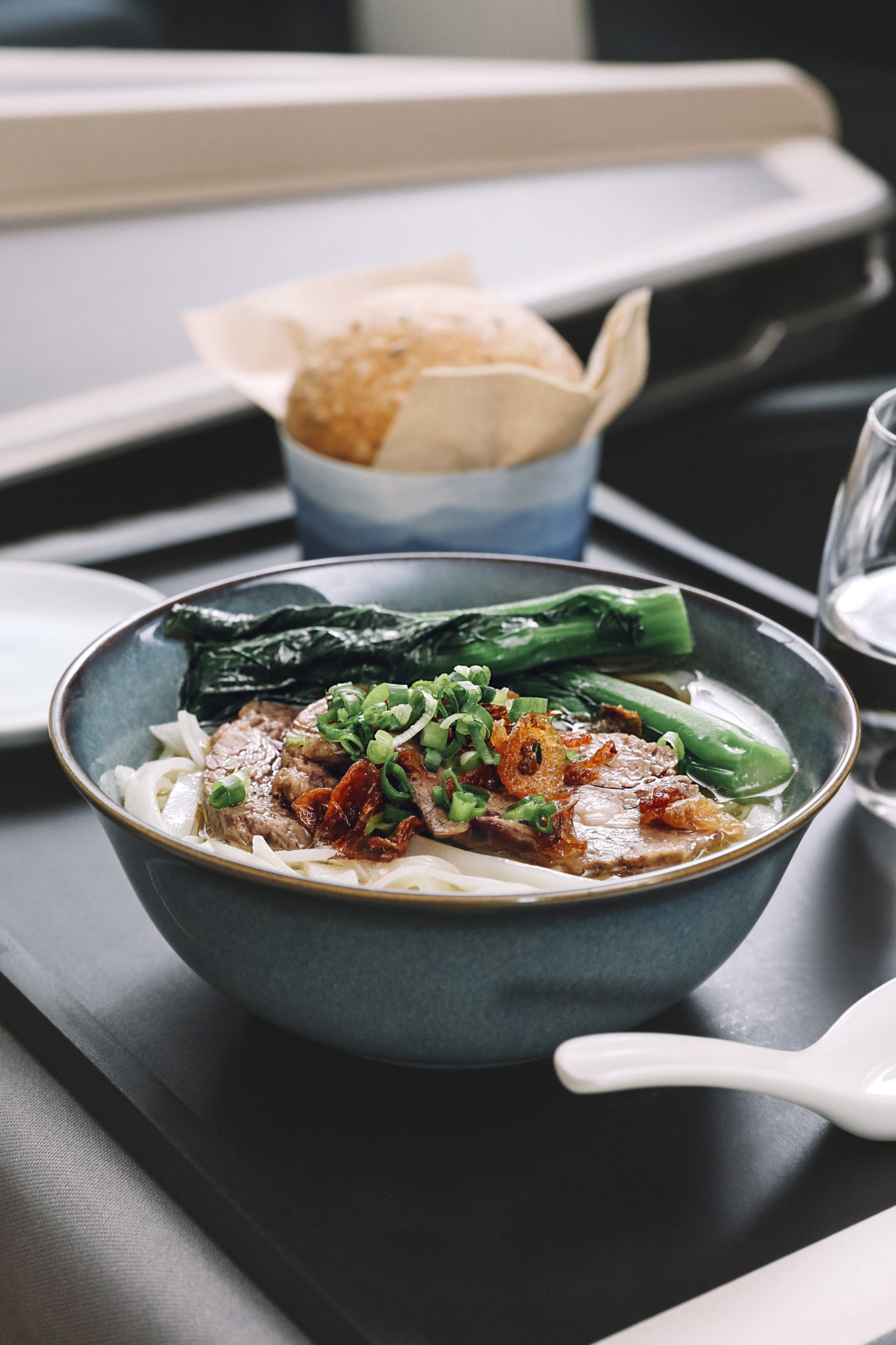 Some Hong Kong favorites are more favorite than others. Image: Cathay Pacific

The benefits to the crew – and of course to passengers – are multifold. For a start, meal preparation can begin as soon as the first order is taken, rather than waiting for either the whole cabin or an interim drop of a paper list by the order-taking crewmember. Whether that’s the first passenger to have their order taken or the last, that’s much less wait from order to meal delivery. The carts for table-laying and delivery can also be balanced and loaded much faster, and more efficiently, with a greater view of what each passenger has ordered.

In addition to removing this critical path from the service, “we take out a lot of the walking to and fro, and also you have actual data about preference, and the crew can know how to merchandise and suggest, ‘would you like to try our curry’,” Lo says. 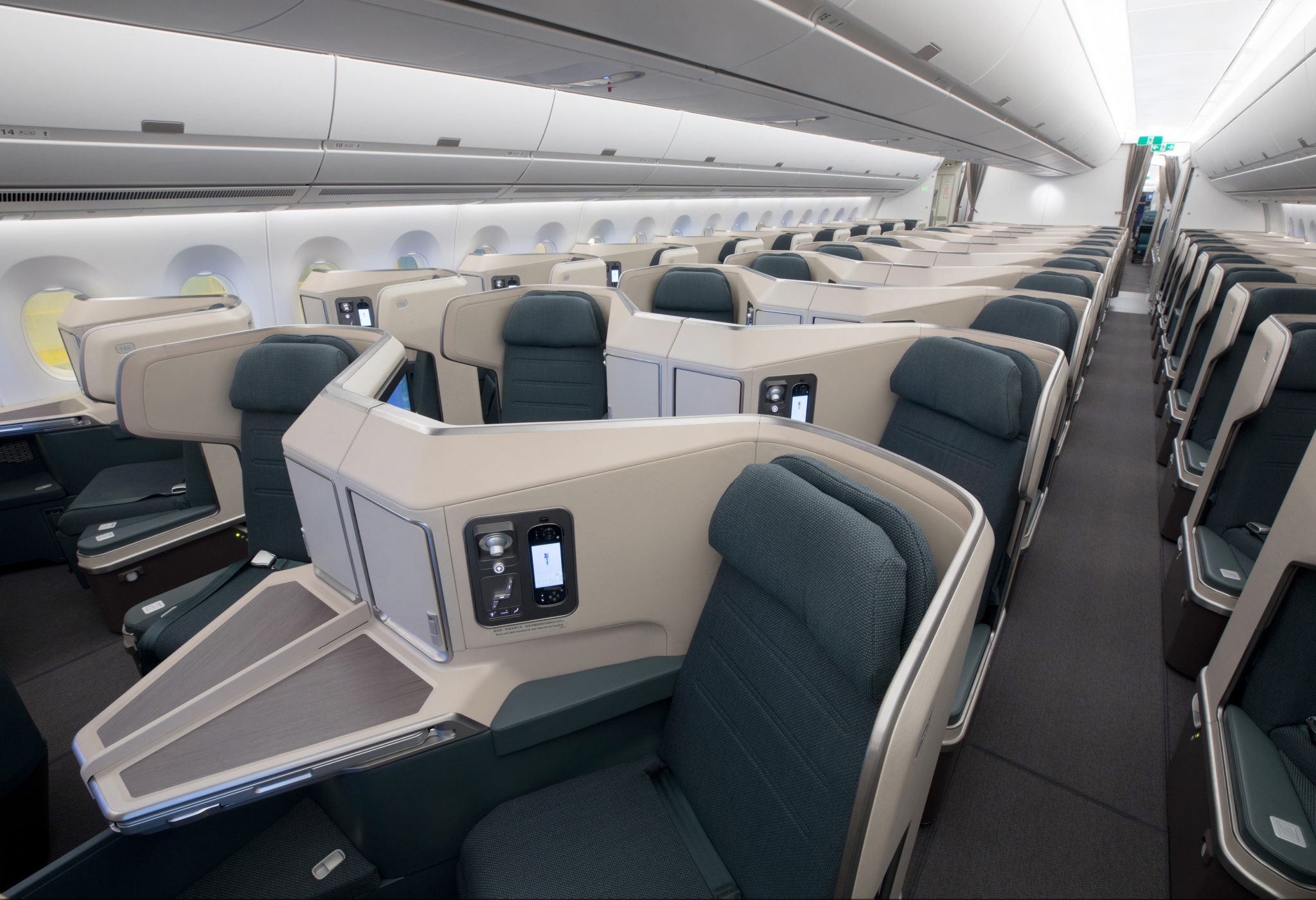 Reducing the time from order to first bite in a large business class cabin is crucial. Image: Cathay Pacific

From the headquarters service design perspective, too, Lo concludes, that data is fed back faster and more usefully. “I know what [passengers] have ordered on record and have analytics. I know on a more real-time basis after the flight what is more preferred, instead of having to wait for complaints and crew reports before I know something is wrong, so my load ratio in the future will also be significantly improved.”