It’s no secret to travelers visiting Japan that the country’s rail network is world-class. The reach of the Shinkansen bullet train network is continuing to grow, trains operate frequently and almost invariably on time, and the passenger experience is delightful. Japanese people, too, love their trains, with racks upon racks of tourist train options displayed at stations. Many of these are specially designed “Joyful Trains”, and are either converted older trains or purpose-built for the tourism market, with new, unique cabins, bars, shops, and other facilities to attract travelers.

Japanese railway companies — there are six ex-state-owned JR passenger train operators, broken up by region — are now seeking to attract overseas visitors beyond their traditional first trip along the Tokyo-Kyoto-Osaka-Hiroshima route to the west of the country.

JR East, which operates in the Tohoku region to the north of Tokyo on the largest island of Honshu, is taking steps to attract more international travelers onto its Joyful Trains, many of which it has created to revitalize the hardest-hit coastal regions from the 2011 Great East Japan Earthquake.

It’s doing so in a variety of ways, improving local services at the same time as it seeks to attract tourists. The most recent #PaxEx improvement is an online booking service in English, Korean and both Chinese character sets for overseas visitors, which allows prospective passengers to reserve their seats on these high-demand services before arriving in Japan, since tickets are not sold overseas. 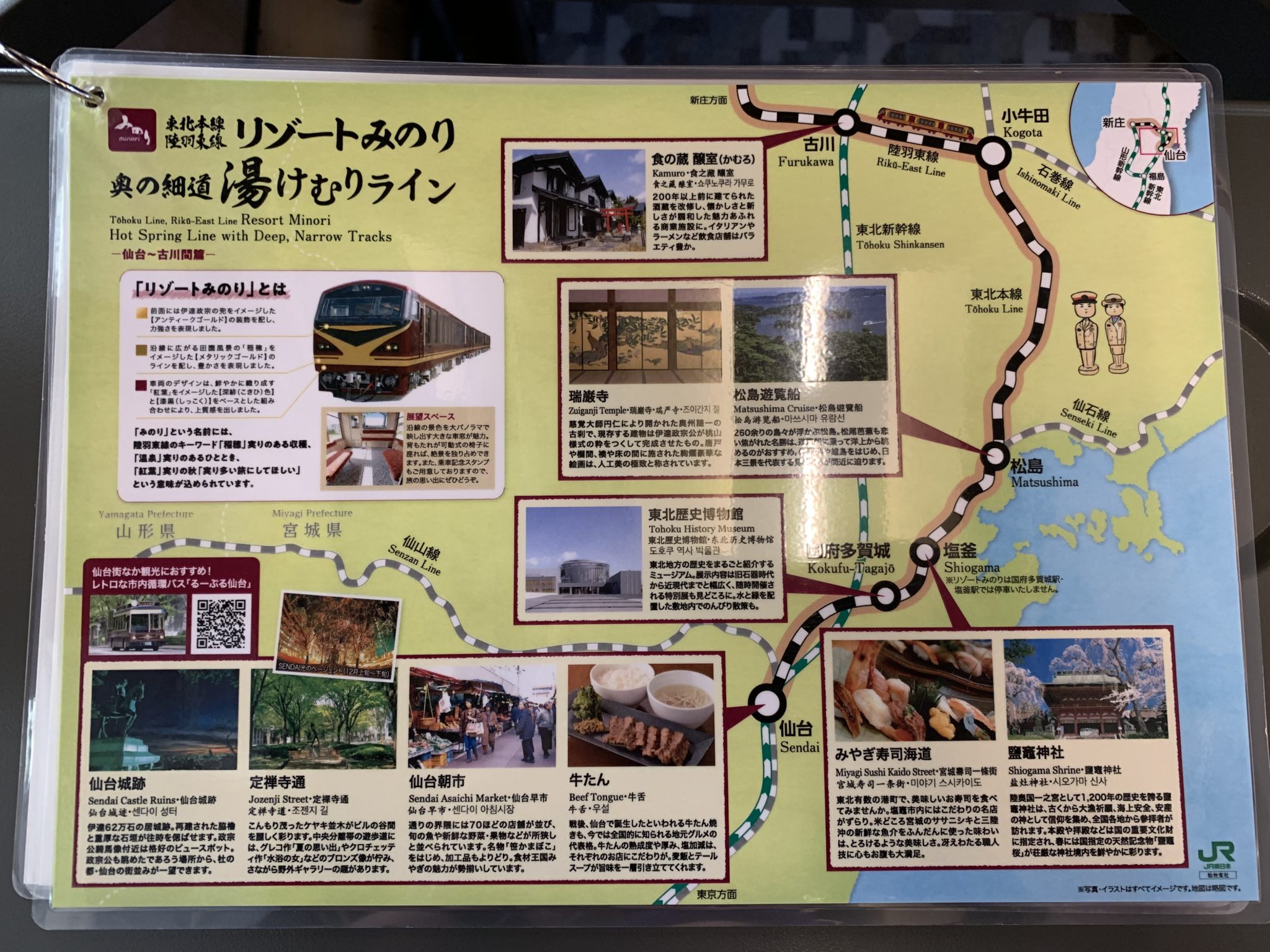 An increasing amount of soft product collateral is being translated into English and other languages. Image: John Walton

One example of these trains is the stylish blue-liveried Resort Umineko, Japanese for seagull, which trundles down the scenic Sanriku Coast from Hachinohe (on the main Shinkansen line north from Tokyo) to the small city of Kuji, which was hard-hit by the 2011 tsunami.

The train is a completely refitted version of the iconic 1970s classic KiHa 40 series diesel multiple unit, and runs on most weekends and public holidays. Inside, seats reminiscent of the traditional Japanese aesthetic join specially designed swiveling panoramic chairs to provide passengers with a choice of experience.

Intriguingly, this three-car train is both a Joyful Train and a regular passenger service. Whichever car is to the front of the train operates as the Joyful Train, requiring special tickets and reservations. The other two cars serve the communities along the line as a local train, and when Runway Girl Network travelled on the service on a sunny afternoon in mid-November the train was impressively well used by both tourists and locals. 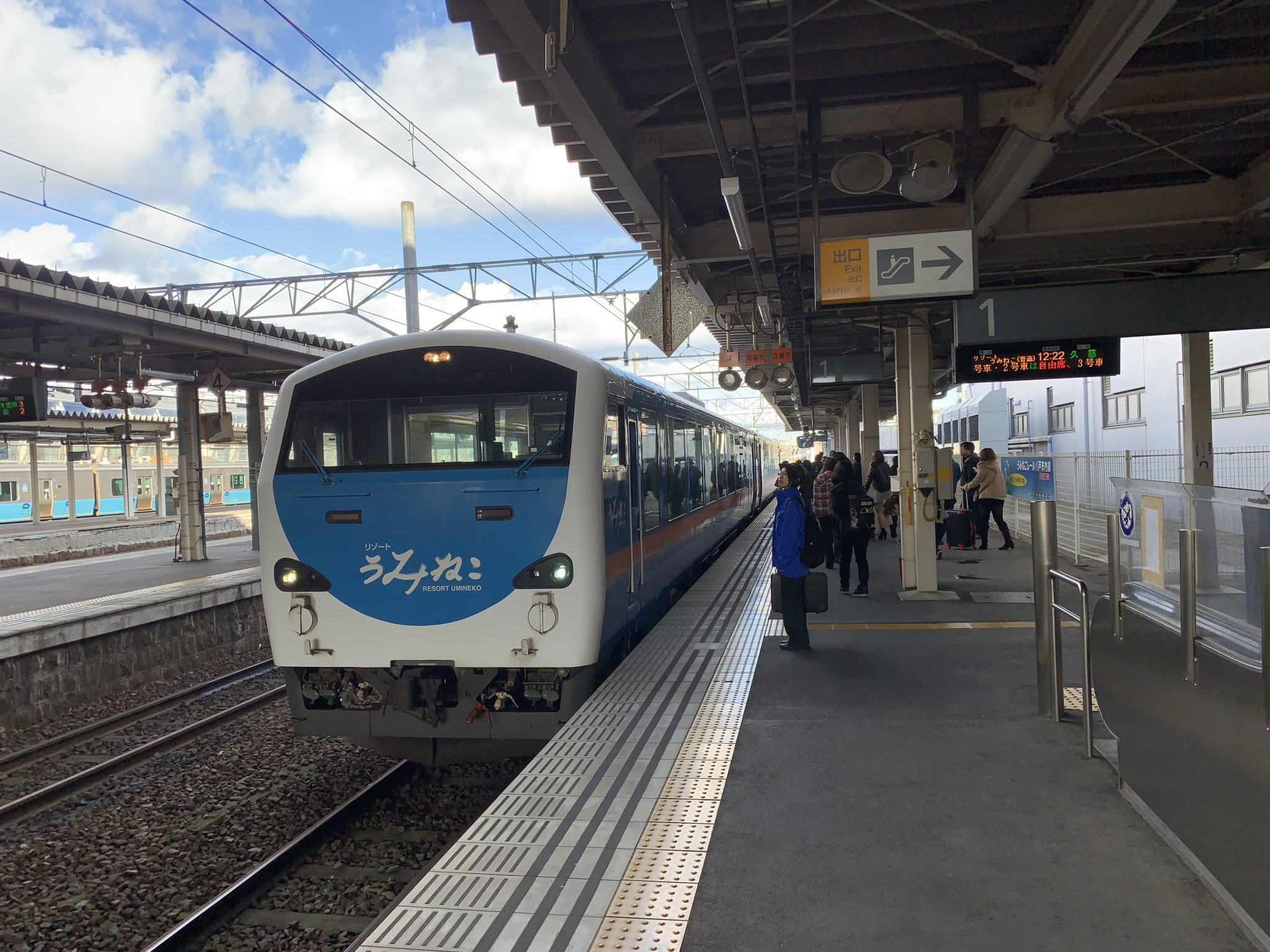 Patronage for both the tourist and regular traveller part of the Resort Umineko was impressive. Image: John Walton

To an extent, these trains are a bit of a checklist for people who enjoy riding trains, which helps to revitalize local economies. People living in cities might otherwise not have visited these small communities, which are themselves fascinating and tourist destinations in their own right: Kuji is home to Japan’s most northerly ama, women free-divers who descend over ten metres without apparatus to collect fresh seafood. A small museum a short walk from the station features exhibitions and produce from the divers for tourists to purchase, while a small station restaurant serves up delicacies such as sea urchin riceballs and bento boxes. 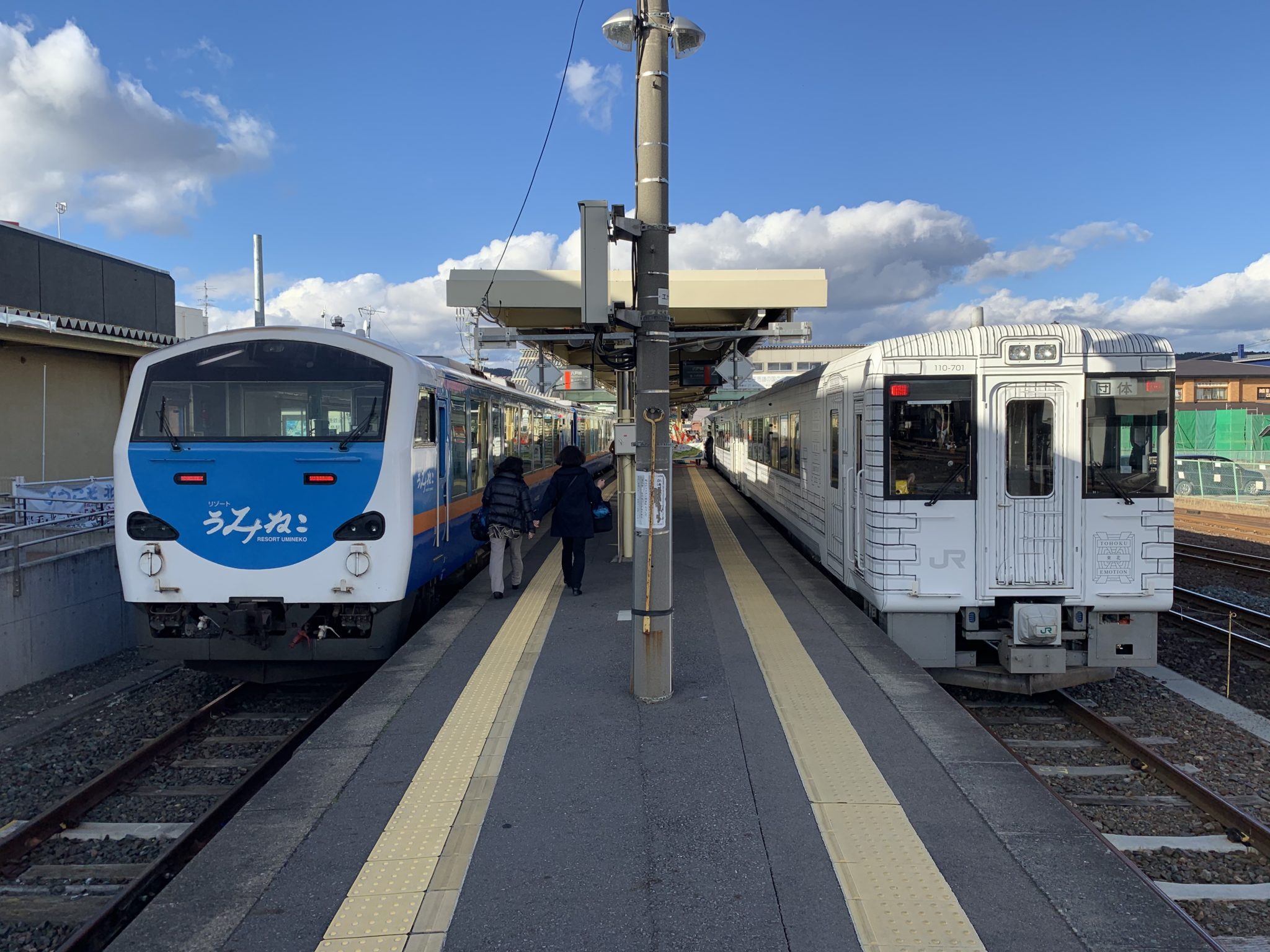 Elsewhere in Tohoku, the Resort Minori is one of JR East’s earlier Joyful Train models, celebrating its tenth birthday this year. Similar in construction to the Resort Umineko — it’s a converted classic diesel from the same forty-year-old family, with a custom-designed interior — it departs from Sendai, the capital of Miyagi Prefecture and the largest city in Tohoku, with updated soft product including waving welcome committees, maps, and souvenir stickers. 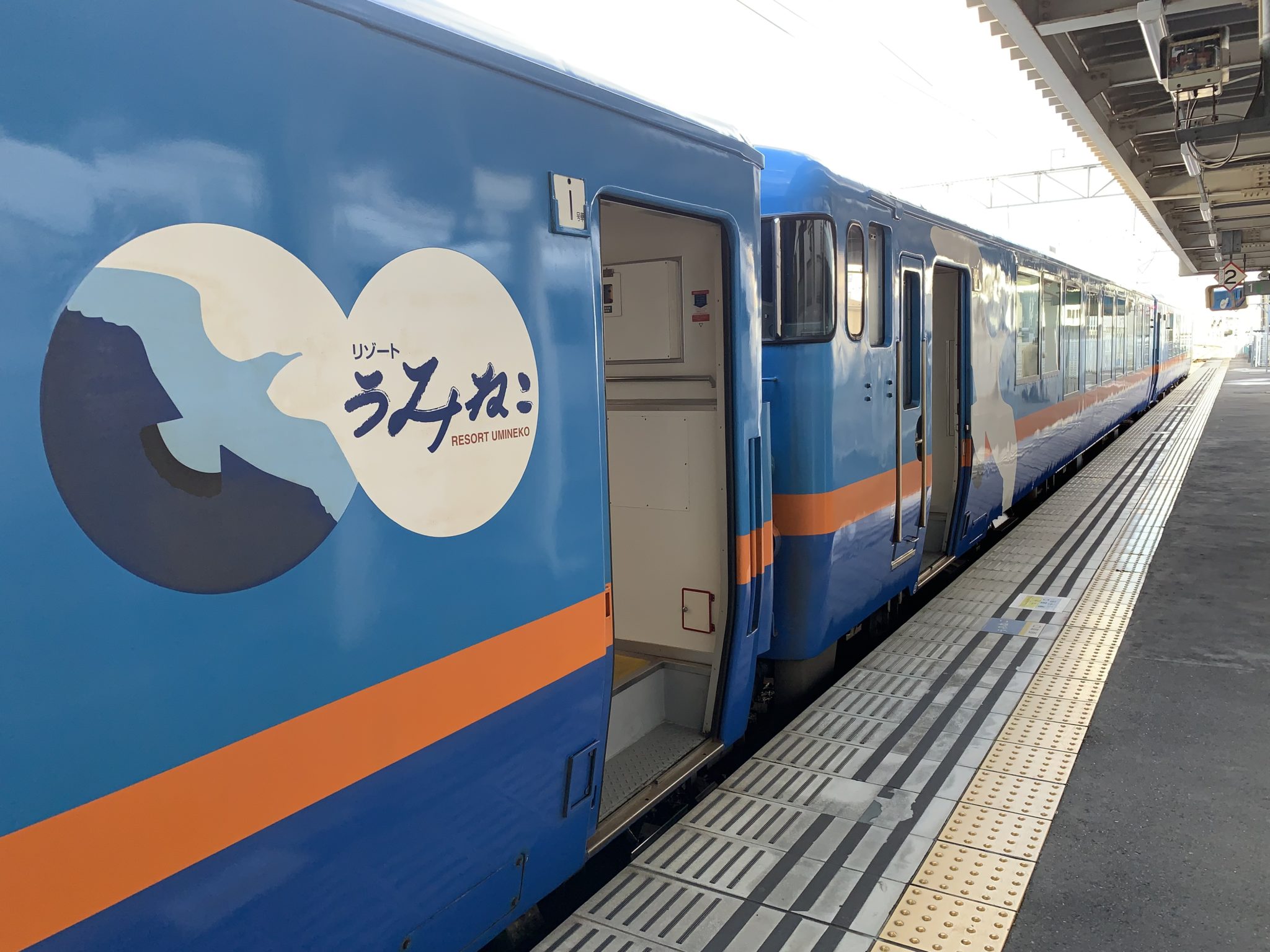 Both Joyful Trains are converted from older KiHa railcars, largely relegated to the smallest and oldest lines in regular service. Image: John Walton

Running first north along the sea to the scenic pine-clad archipelago of Matsushima, one of the famous Three Views of Japan, the train then swings east along the Riku East Line, famous for its hot springs and mountain views, finishing at Shinjo, where passengers can either take the Toreiyu Tsubasa (also known as the footbath Shinkansen) or the regular Tsubasa Shinkansen service back to Tokyo. 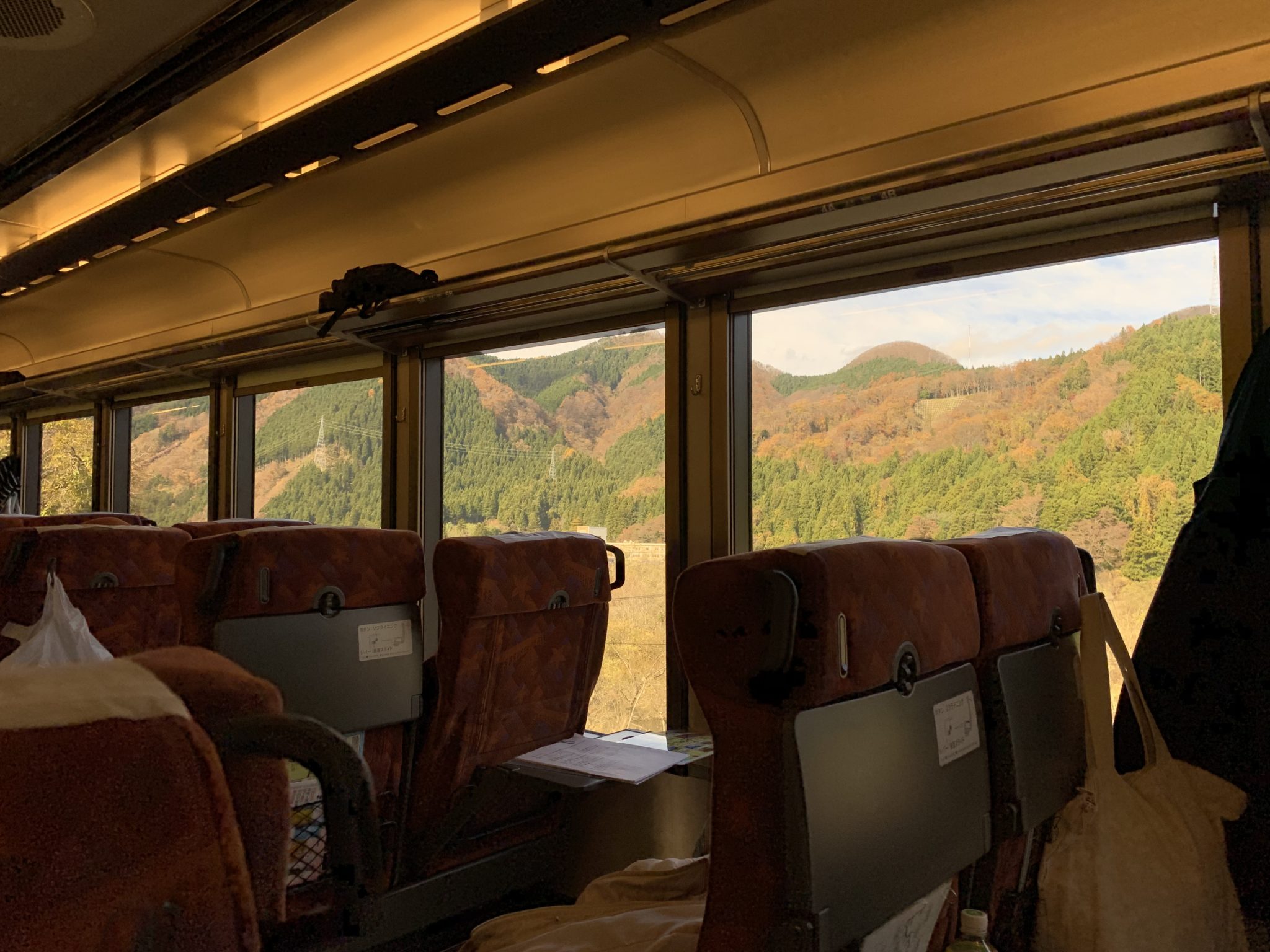 Unlike the later Resort Umineko, the Resort Minori is entirely a Joyful Train, and is clearly themed for the autumn leaf-peeping crowd with its warm oranges and reds. Like many Joyful trains, it slows for particularly scenic views, and makes a twenty-five minute stop at the mountain hot-spring town of Naruko Onsen, where even the station has footbaths for passengers to dip their feet into, and where local shops near the station offer traditional handicrafts including the famous kokeshi dolls and lacquerware. 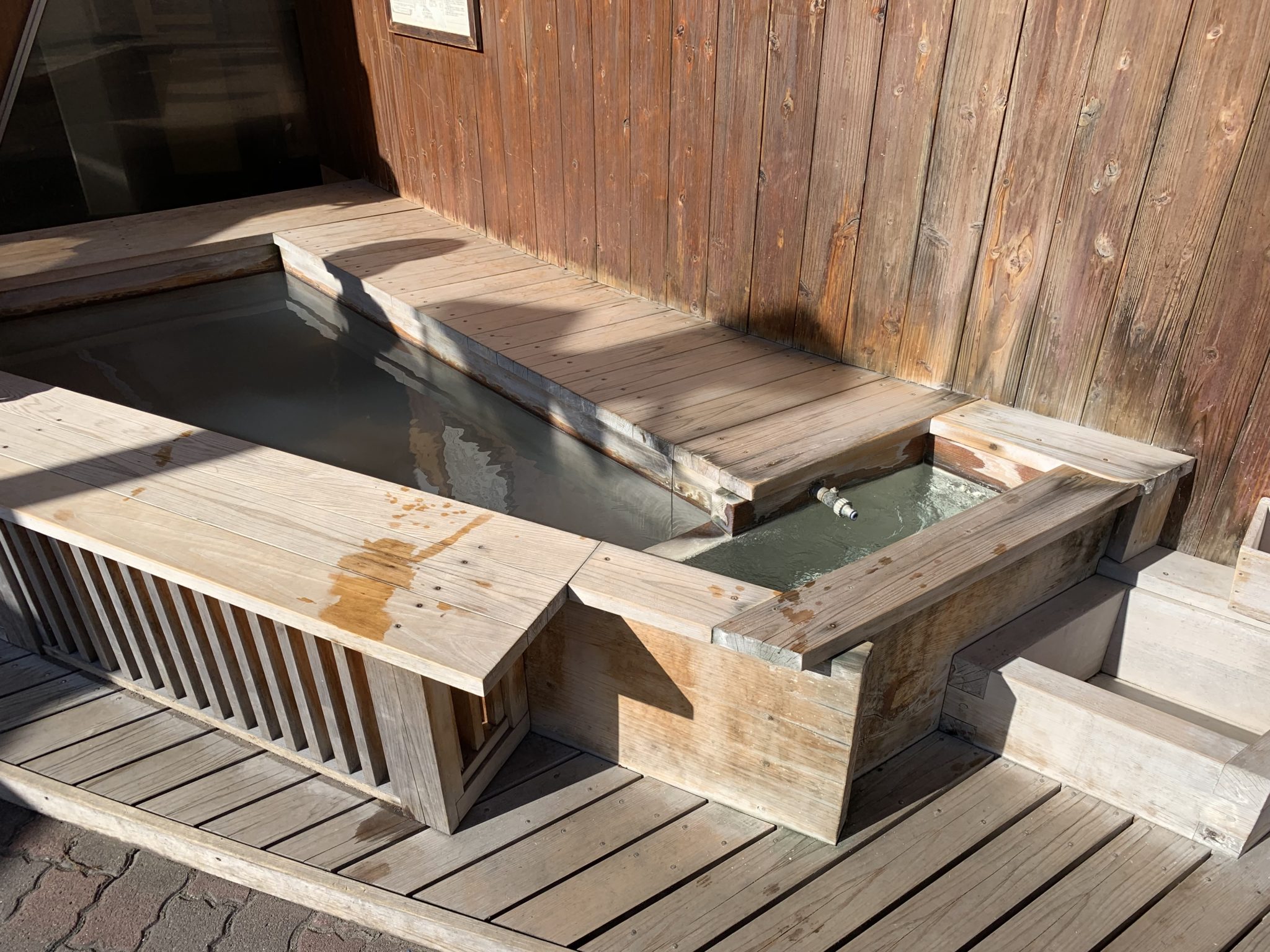 A quick footbath during a twenty-minute stop? Why not? Image: John Walton

Inside both of these uniquely designed trains, the front and rear car both offer panoramic views, and the very front of each car has a large window overlooking the driver’s shoulder, with a high bench allowing passengers to get a view right down the track as the train rolls along. 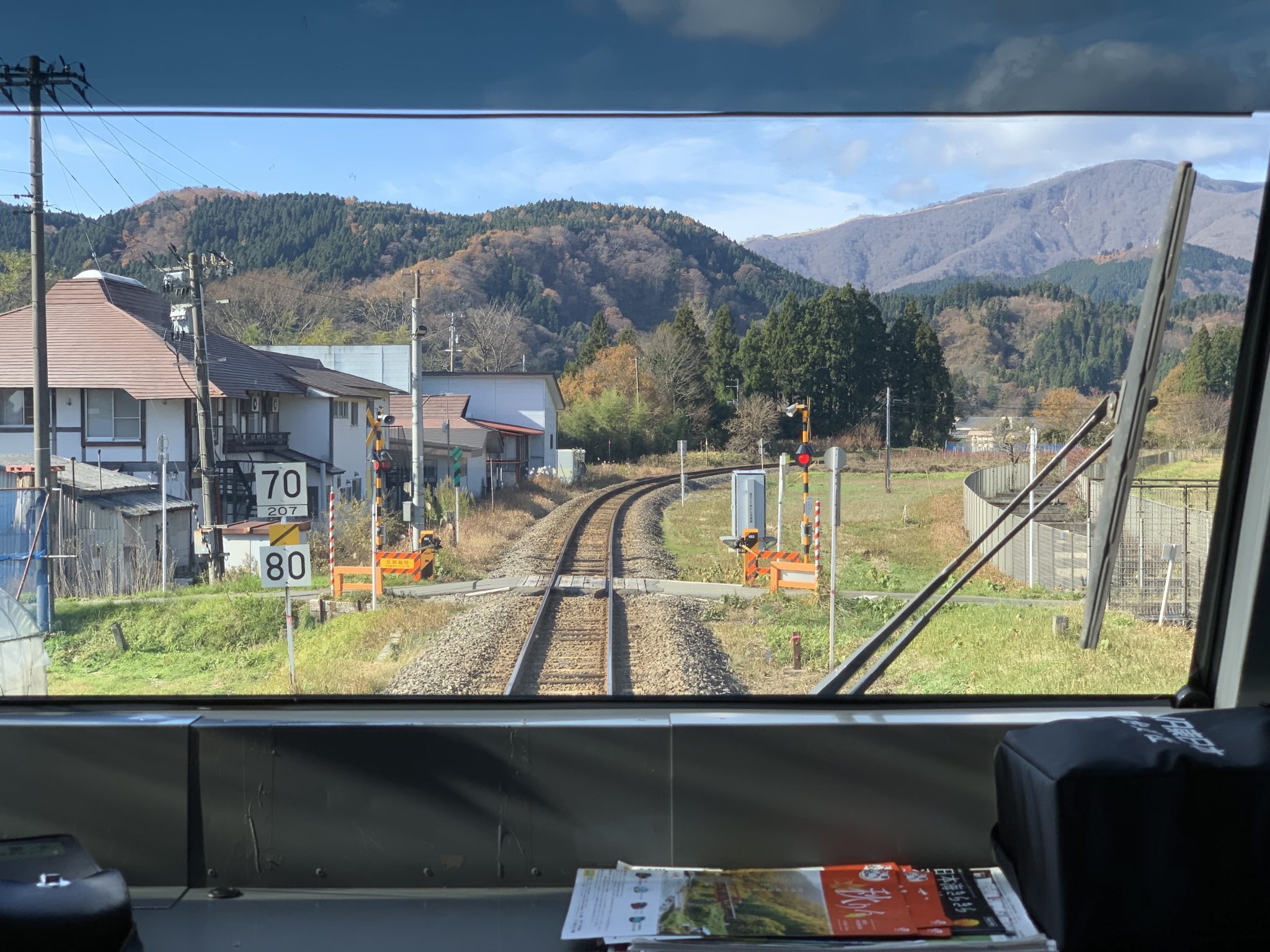 A driver’s eye view out the front of the train is a real pleasure. Image: John Walton

Windows are larger than normal, and facilities for disabled passengers, people with reduced mobility, and those with particular medical requirements are impressive, with barrier-free access options, wheelchair spaces, accessible bathrooms that include stoma facilities, and more. 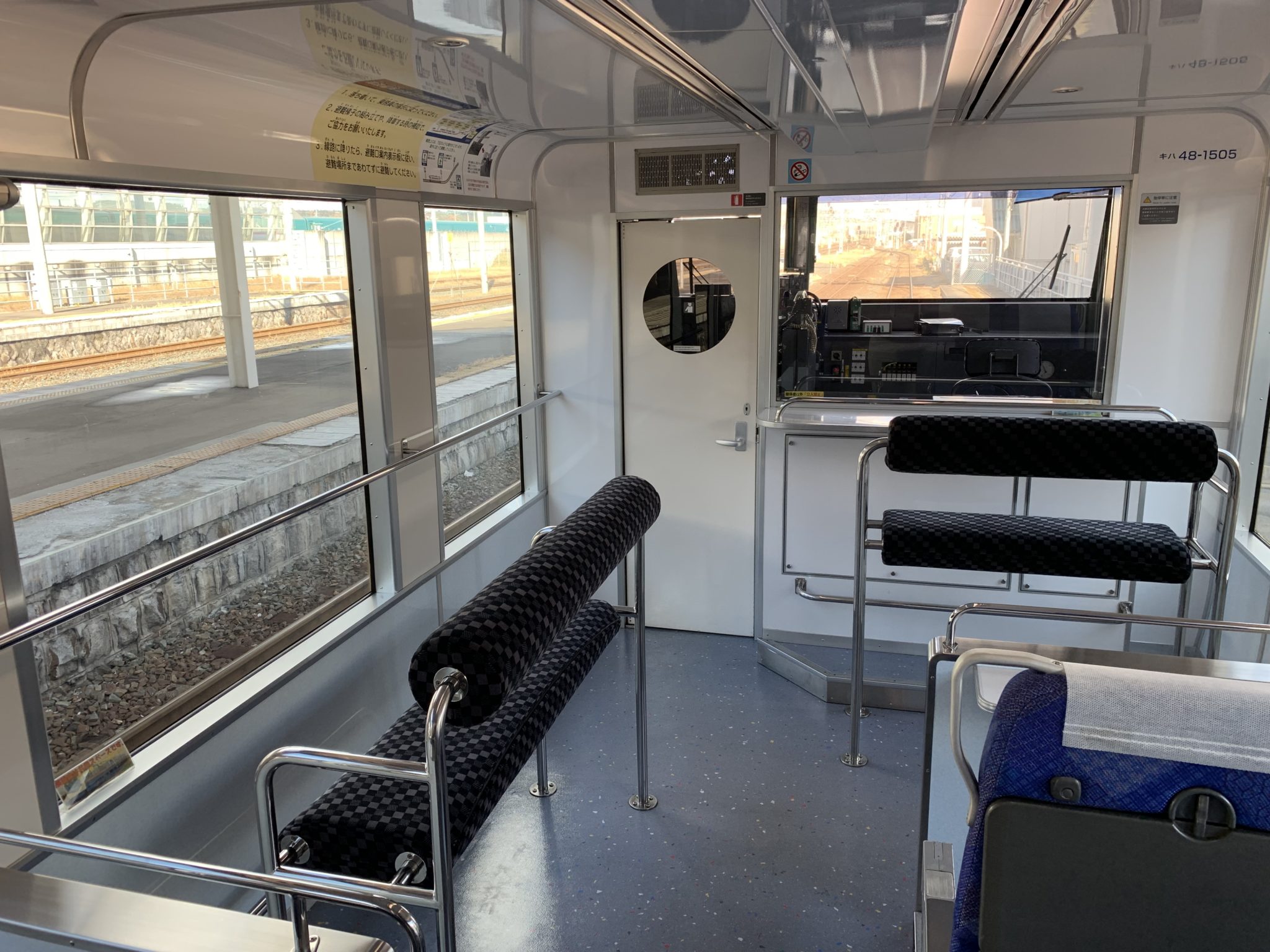 Kids and adults alike enjoy the driver’s eye view from the front of the train. Image: John Walton

But it’s the warmth of the welcome that’s most striking: tiny stations roll out their staff and local volunteers to hold banners and wave to the trains, there are special stamps and giveaways issued to passengers, and multilingual information in hard copy form is starting to roll out to many of these services. It’s this part of rural Japan that many overseas travelers find most appealing yet most difficult to access, and the steps taken by the railway companies to open up these opportunities to international visitors are a key part of getting there. 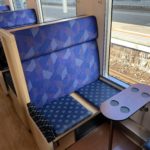 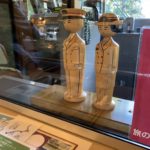 The Resort Minori’s driver cab features a pair of JR staff-themed kokeshi dolls, which are local handicrafts from the region. Image: John Walton 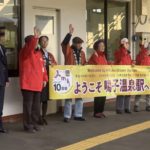 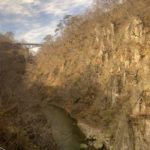 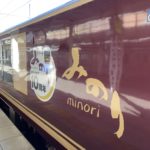 Japan is a world leader in reducing access barriers, and these trains are no exception. Image: John Walton 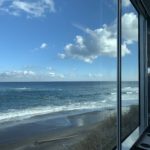 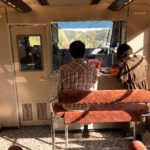 Creating “third spaces” within the train is popular and a big draw. Image: John Walton 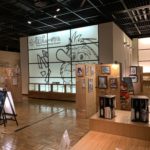