Denver International Airport (DEN) has been the subject of conspiracy theories dating as far back as its construction in the 1990s. In recent years, with the progression of social media, the airport has embraced the publicity brought on by said theories, including the current Great Hall Project. In several areas throughout the terminal, the airport has placed construction signage referring to the end of the world.

When driving to the airport, passengers are greeted by a 32ft towering blue horse sculpture, officially known as Blue Mustang, though locals refer to it as “Blucifer” because of its glowing red eyes. During its construction, a section of the statue fell on its artist and severed an artery, killing him.

The main terminal also houses some curious objects, such as murals that depict violent scenes of death, and the airport’s ceremonial capstone mentioning the New World Airport Commission and featuring the symbol of the Freemasons, a fraternal society sometimes connected to the Illuminati by conspiracy theorists.

Also feeding into the theories is the layout of the runways at DEN, which resemble the Nazi swastika symbol. The 53 sq mile sprawl of the airport has also led to speculation that the airport may house secret underground facilities or bunkers to house the Illuminati during the apocalypse. The airport opened in 1995, over a year behind schedule, and two billion dollars over budget. 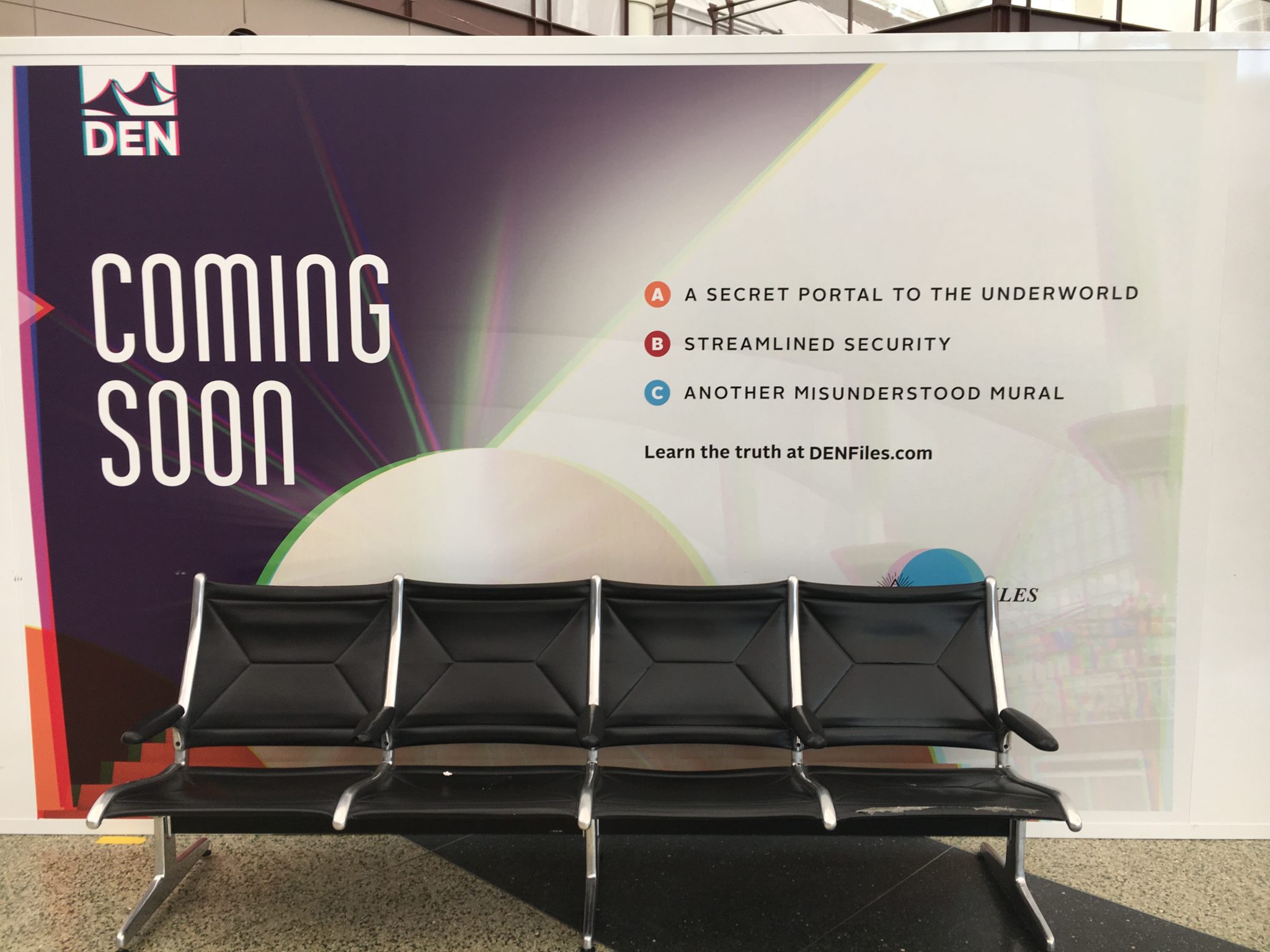 DEN is taking advantage of the many theories out there. Image: Paul Thompson

The nation’s fifth largest airport (by passenger volume) is undergoing a major revamp of the Jeppesen Terminal, which houses its check-in and TSA screening facilities. After the creation of the TSA following 9/11, the airport created two massive screening stations at opposite ends of the terminal, which of course were never part of the original design. The Great Hall project will relocate passenger screening to the same level at which passengers check in for their flights, and promises to enhance the screening experience.

Runway Girl Network reached out to the media team at DEN for an elaboration of what exactly “enhanced screening” will mean to passengers, but did not receive a response. However, given the current trend, one might expect biometric screening to be implemented.

In addition to the relocation and enhancement of passenger screening, the Great Hall will receive a major makeover. The project is Denver’s first public-private construction partnership, and once completed, the terminal will be “an oasis” for travelers, including upgraded dining and retail options, as well as passenger use facilities such as elevators, escalators, and restrooms. The airport expects to be able to handle an estimated 80 million passengers annually, upon completion.

DEN is also spending $1.5 Billion to add 39 gates to its three existing terminals. The airport’s Master Plan features a scheme for two additional concourses, a second terminal, and up to six additional runways, which would give the airport a staggering twelve runways. One of the current runways measures 16,000 feet in length, the longest commercial runway in the United States, and would be more than suitable for Airbus A380 operations. However, no airline currently operates into DEN with the A380. The only two airlines currently serving DEN with A380s in their fleet are British Airways and Lufthansa.

At this point, it’s wishful thinking to have a need for twelve runways, but as a Denver resident and traveler who takes dozens of flights per year, it is my opinion that DEN needs a premium international terminal. The three lounges at DEN (One World, Star Alliance, and both United lounges) are modest in terms of size and luxury, which I think must be part of the reason the airport hasn’t attracted more premium international airlines. In fact, Emirates Chairman and CEO His Highness Sheikh Ahmed bin Saeed Al Maktoum earned his Bachelors’ Degree at the University of Denver. The 777-200LR in Emirates’ fleet could easily cover the 6,752 nautical mile hop from Dubai to Denver, with range to spare.

DEN is getting an American Express Centurion Lounge, but that is planned to be built on the C Concourse, which is primarily home to Southwest Airlines, who does not currently offer an AMEX card to provide benefits to their Rapid Rewards frequent flyer members. It is an interesting location choice, but the C Concourse is the only concourse without a premium lounge of any sort.

The Great Hall and gate expansion projects are expected to be complete in 2021, totaling $3.3 Billion, and expanding the airport’s aircraft capacity by 35 percent.