Boeing’s 787 Dreamliner final assembly facility in South Carolina is well-known, but many people are unaware that the airframer has an assortment of other facilities in the area that also support its business. One such facility is the Interiors Responsibility Center, or IRC as it is called internally. Runway Girl Network toured the IRC as a part of the festivities around last week’s 787-10 Dreamliner delivery to Singapore Airlines.

At the dawn of the South Carolina 787 program, all Boeing-made cabin fixtures including crew and attendant rest stations, ceiling panels, class dividers, stow bins, closets and partitions were produced in Washington’s Puget Sound region, and were then shipped cross-country to North Charleston for installation on the aircraft. As the production rate increased, Boeing saw the need to build a second facility for the production of these fixtures near its second final assembly line.

Boeing director IRC South Carolina Michelle Bernson provided our tour of the facility, which is divided into two areas. The capital equipment area includes equipment such as machine presses and multi-axis routers. The second area is the assembly area, which we were shown.

Upon entering, it becomes obvious that Boeing has applied policies and manufacturing techniques from other parts of its business. Pedestrian walkways are clearly defined by paths painted on the floor. Ergonomic principals are applied as well, such as pneumatic tools and hoses suspended from the ceiling.

The most interesting application brought here from other sites is the constantly moving assembly line. At its 737 Final Assembly facility in Renton, Washington along with the 777 line in Everett, aircraft progress down the line at a rate of about two inches per minute, or 10 feet per hour. At the IRC, moving lines are used for the fabrication of overhead bins, closets, and crew rest areas. The fixtures are placed on racks that are moved robotically along a prescribed path.

Many of the fixtures are produced using a material called Nomex honeycomb core, which is made with a structure of aramid fiber paper, then coated in a resin and cured, creating a product that is both rigid and incredibly lightweight. Once the material is pressed into shape and refined, the necessary supporting structures and hardware are added, such as door hinges and handles. We were given the opportunity to hold a stow bin door, and it felt remarkably light, given its size. 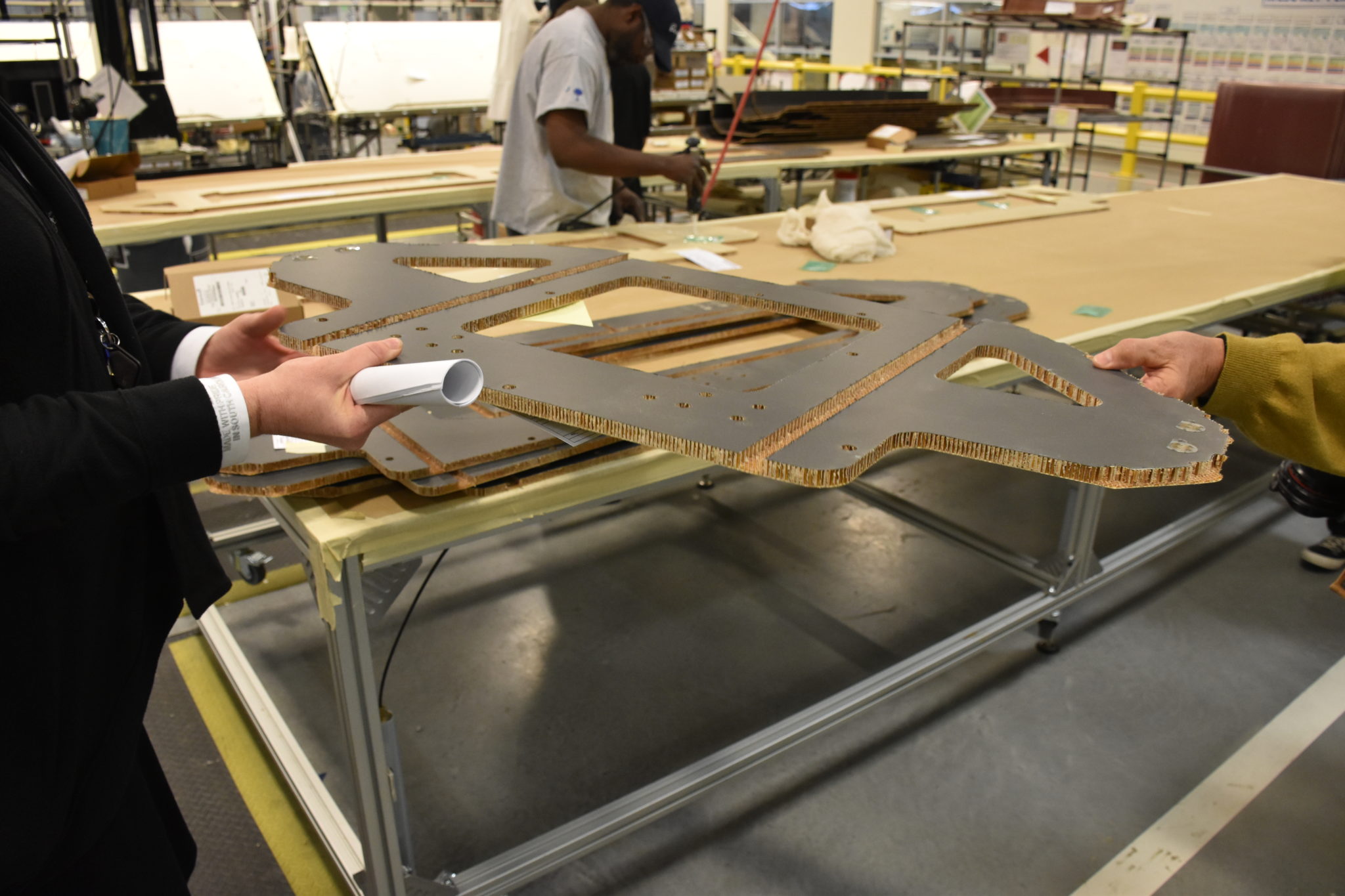 Following the overhead bin assembly, we saw the station at which closets are assembled. This also takes place on a moving line. These closets of various sizes typically hold items such as coats or jackets, hand luggage or even wheelchairs. Bernson mentioned the ergonomic capabilities of the moving line, having the ability to raise, lower and tilt, to make it easier for the mechanic to do his or her work without having to require assistance to move these pieces, which can weigh 200 pounds or more. 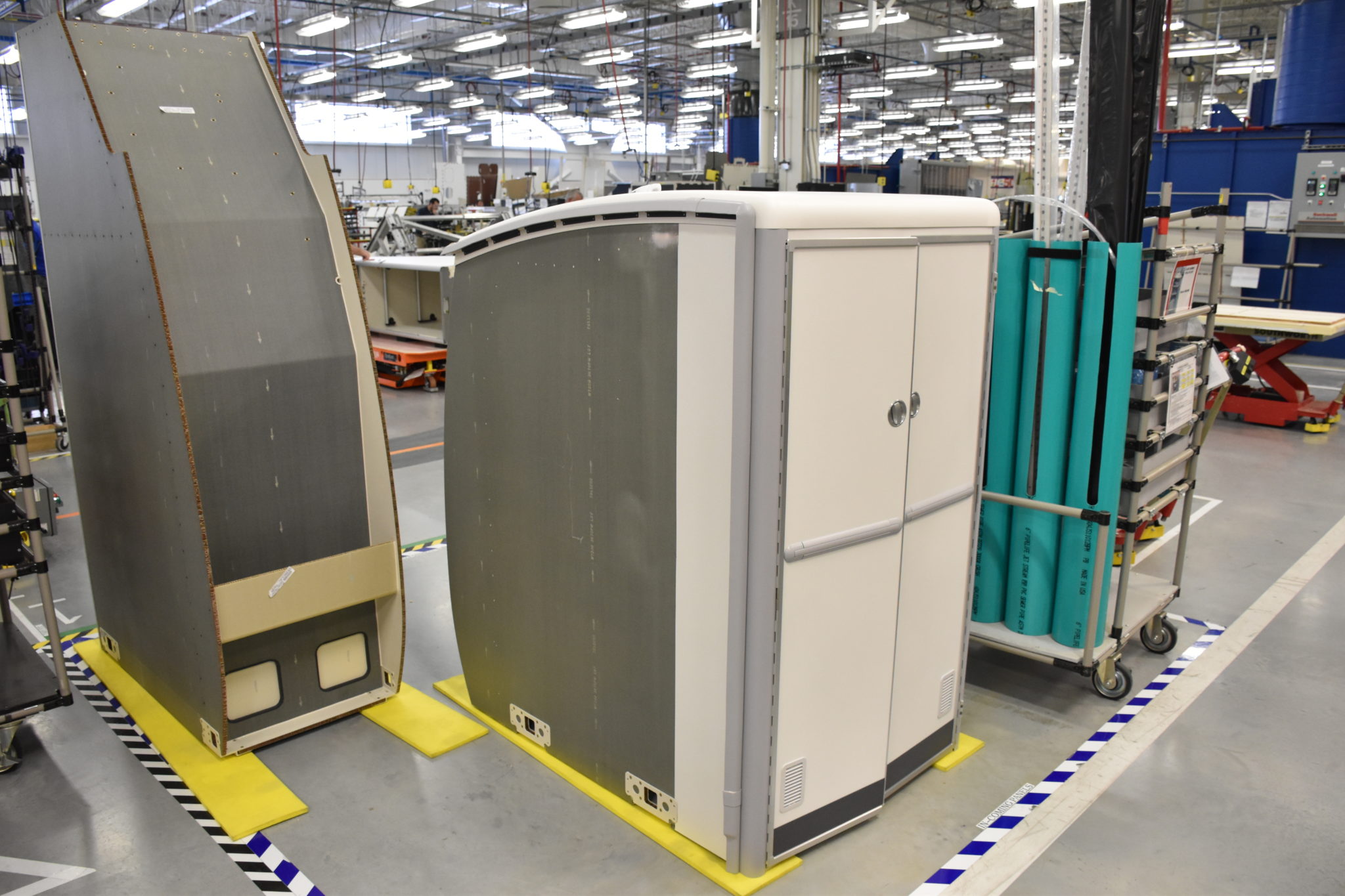 The final station we were shown was the crew rest assembly area, which is also completed on a moving line. Bernson said the moving line has reduced the completion time from 13 days to only three.

On the 787, Boeing provides the option for both a flight attendant rest and a pilot rest, which includes an entrance enclosure and a bunk line. On Singapore’s 787-10, there are no crew rest areas because the planes will be used for relatively short regional routes. For those who opt to install the rest areas, the pilot rest is usually located in the forward galley, just behind the flight deck, while the flight attendant rest area is in the very back of the aircraft, above the economy cabin. 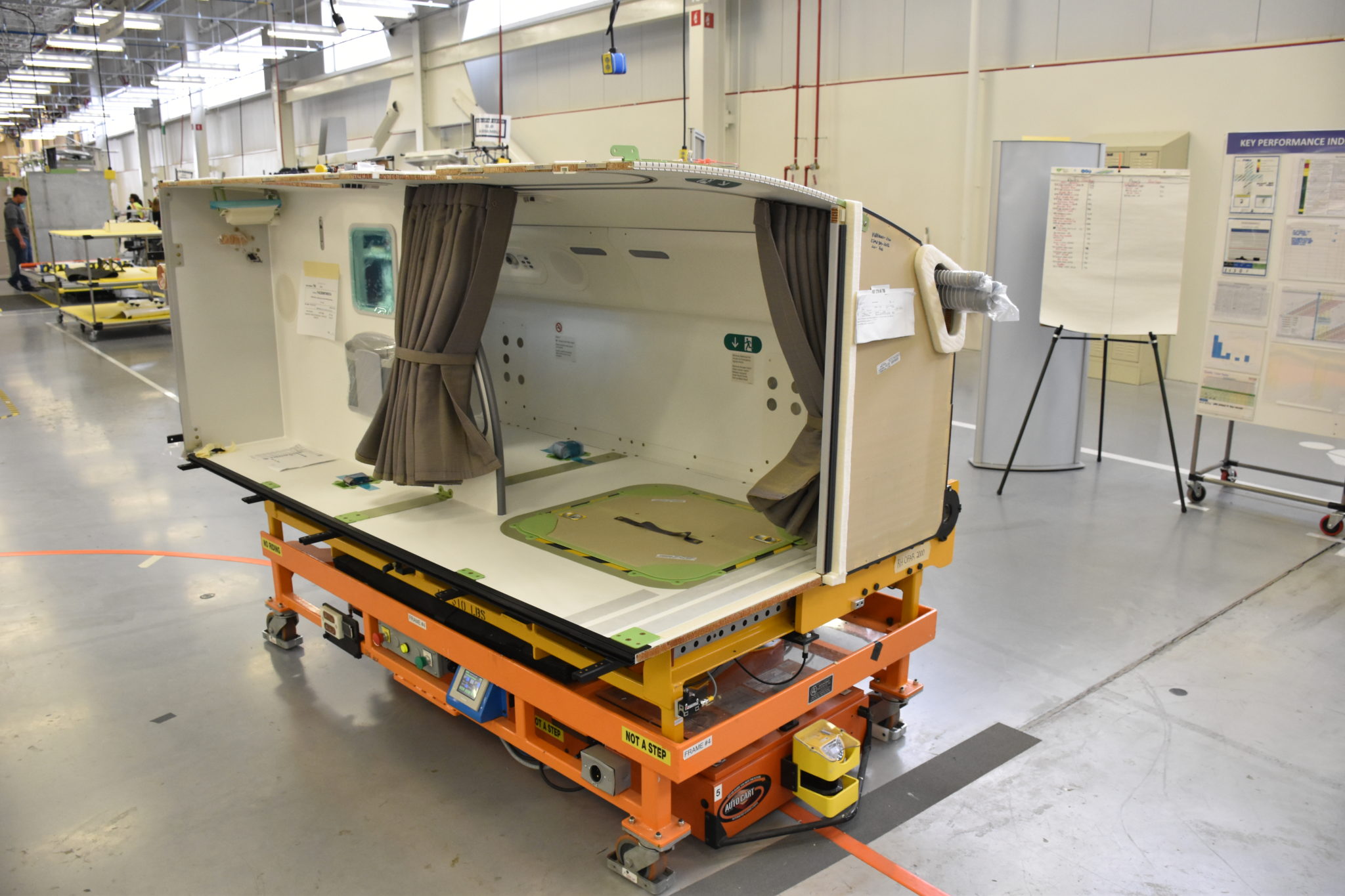 Boeing opened the 300,000 square-foot facility in January, 2012. It is located in Ladson, SC,  just over ten miles northwest of the final assembly and delivery centers.