Seven years after Air New Zealand unveiled its Skycouch “cuddle class” seats, the airline is developing new options for infants, children and the adults looking after them to make travel more comfortable on the Kiwi carrier’s longhaul fleet.

Runway Girl Network sat down with Air New Zealand’s head of aircraft programmes Kerry Reeves to learn more about the changes to the existing belt system and the new children’s restraints on offer, comprising four separate products: the Cuddle Belt, the Infant Harness, the Infant Belt, and the Skycouch Pod.

“While the Economy Skycouch was initially marketed to couples when it was introduced in 2011, we found it suited parents with young families especially well and these updates have been made with them in mind,” Reeves says. “We have spoken to many customers who have travelled on the Skycouch and their feedback has helped to inform the updates and refinements we are introducing this year.”

“The Skycouch Cuddle Belt, which was previously only certified to allow two adults or an adult and a child travelling together to lie down side by side on the Skycouch, has been updated to allow two children to use it providing greater flexibility to families,” Reeves explains. “The cuddle belt itself is manufactured from the same seatbelt material as normal seatbelts but uses a unique attachment system to make it very simple for passengers to use.”

Reeves highlights that the Skycouch’s Cuddle Belt is manufactured from regular seatbelt material provided by Amsafe (the manufacturer of other seatbelts within the Air New Zealand fleet), but features what the airline calls a unique attachment system to increase ease of use by passengers.

“It’s fastened to the seat in front to ensure a safe but comfortable restraint system for two occupants to remain lying down in the event of turbulence,” Reeves says. 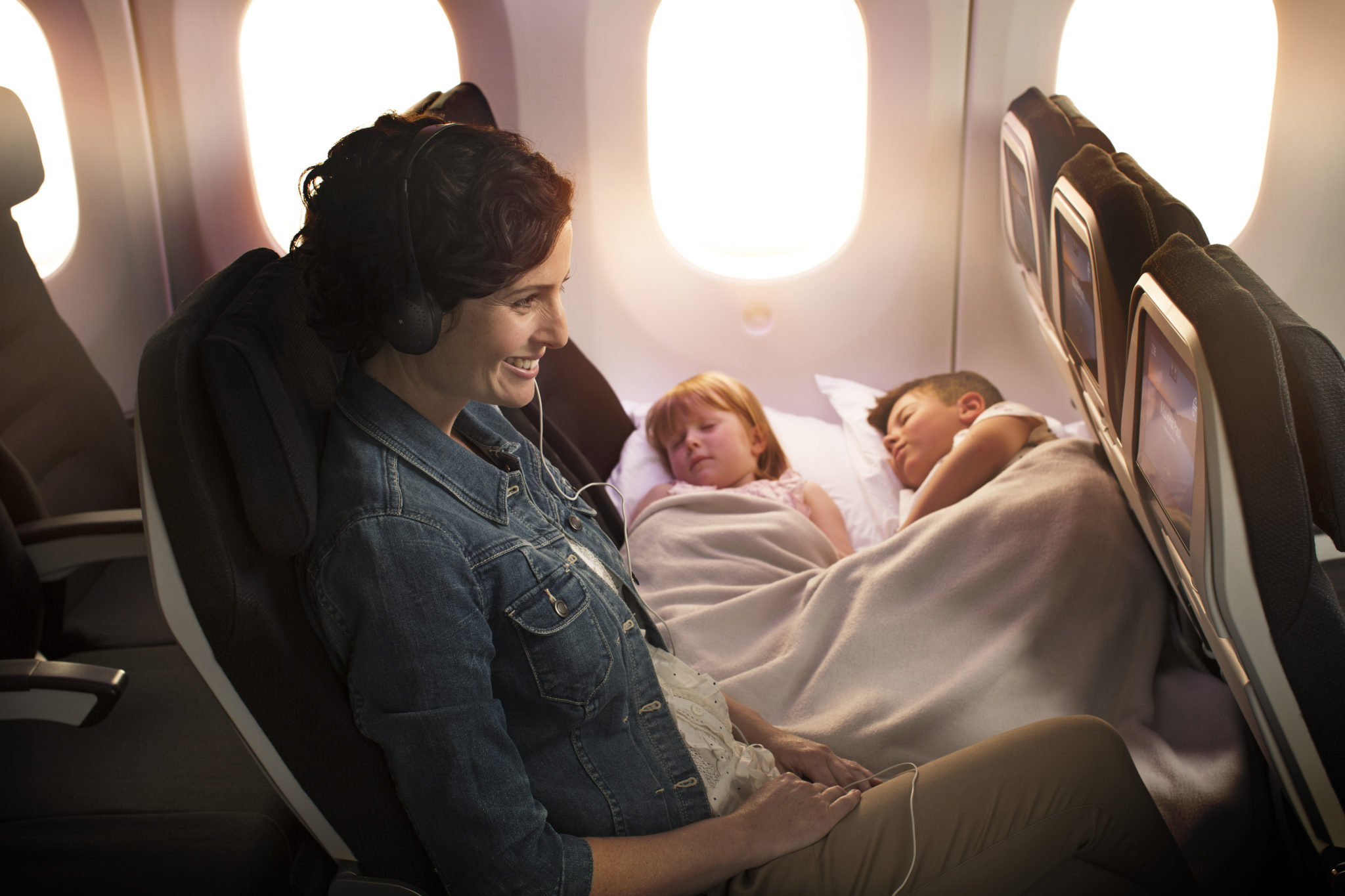 The Skycouch adds options for two children to be safely restrained by the new Cuddle Belt. Image: Air New Zealandjpg

The changes involve a relatively simple modification in order to add one extra seatbelt attachment to the seat, and will be explained by an updated crew briefing on board, and through a new version of the instruction card for the Skycouch. Air New Zealand will also use the card to explain the new options for infants, while savvy travellers will also be able to do their research in advance with information clearly provided on the updated “Skycouch Infant Harness, Belt & Pod” section of the airline’s “Flying with children and infants” guide.

Air New Zealand is also updating its single-infant harness, which is the basis of the restraint system for the airline’s tiniest travellers, enabling further options to keep them comfortable and safe.

The infant harness comes in three sizes: small for infants shorter than 65cm and weighing up to 5kg, medium for kids of 65-85cm and 5-10kg, and large for bigger children measuring 85-110cm and 10-18kg.

To use the new infant belt, the belt is looped through the infant harness and secures to a clip in the window seat of the Skycouch.

The infant belt also loops through the Skycouch Pod, a kind of mini-bassinet available for smaller infants that fit within the height limit of the pod, 70cm. The pod is 32cm wide at the head, 22cm wide at the foot, and 15cm deep. 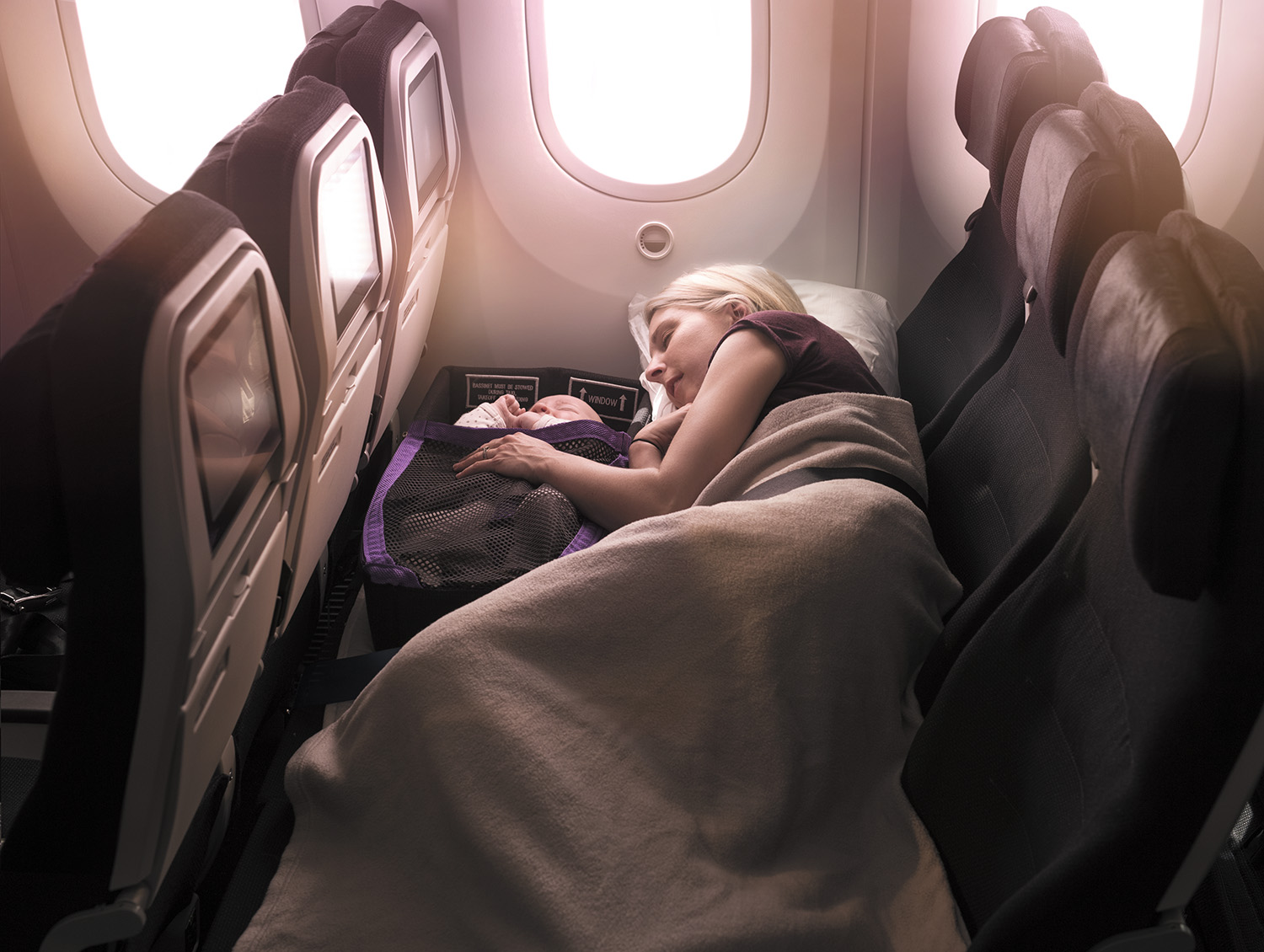 Reeves tells RGN that, even if customers are not familiar with the product, “the Skycouch can be booked as a part of the normal booking process in advance, and if available can also be booked as late as check-in for the flight on the day.”

The airline is currently seeking certification and regulatory approval, and expects to roll the new products out onto its Boeing 777 and 787 fleets “from mid-2018”.

In addition to its own fleet, Air New Zealand will also be offering the new children’s options to airlines to which it licenses the Skycouch product.

Press Release: PXCom and LATECOERE to team on landscape cameras