When it comes to corporate social responsibility, airlines have a unique opportunity to raise awareness of good causes, including partnerships with non-profit organisations around the globe. They also happen to operate 200-foot-long flying billboards. Making the most of the fact that its aircraft operate for a wide variety of carriers around the world — and that they would otherwise be painted in a nondescript livery or plain white — Portuguese wetlease specialist Hi Fly is supporting an environmental cause with its Turn the Tide on Plastic-liveried Airbus A330-200.

Hi Fly’s aircraft supports the Portuguese boat in the Volvo Ocean Race 2017-18, which also wears a ’Turn the Tide on Plastic’ paint scheme. The airline “joined the project in cooperation with the Mirpuri Foundation, the main sponsor of ‘Turn the Tide on Plastic’ boat, and AkzoNobel that provided the coating to personalise the aircraft,” Mirpuri — also the founder of the eponymous foundation, which has a wide social remit — says. 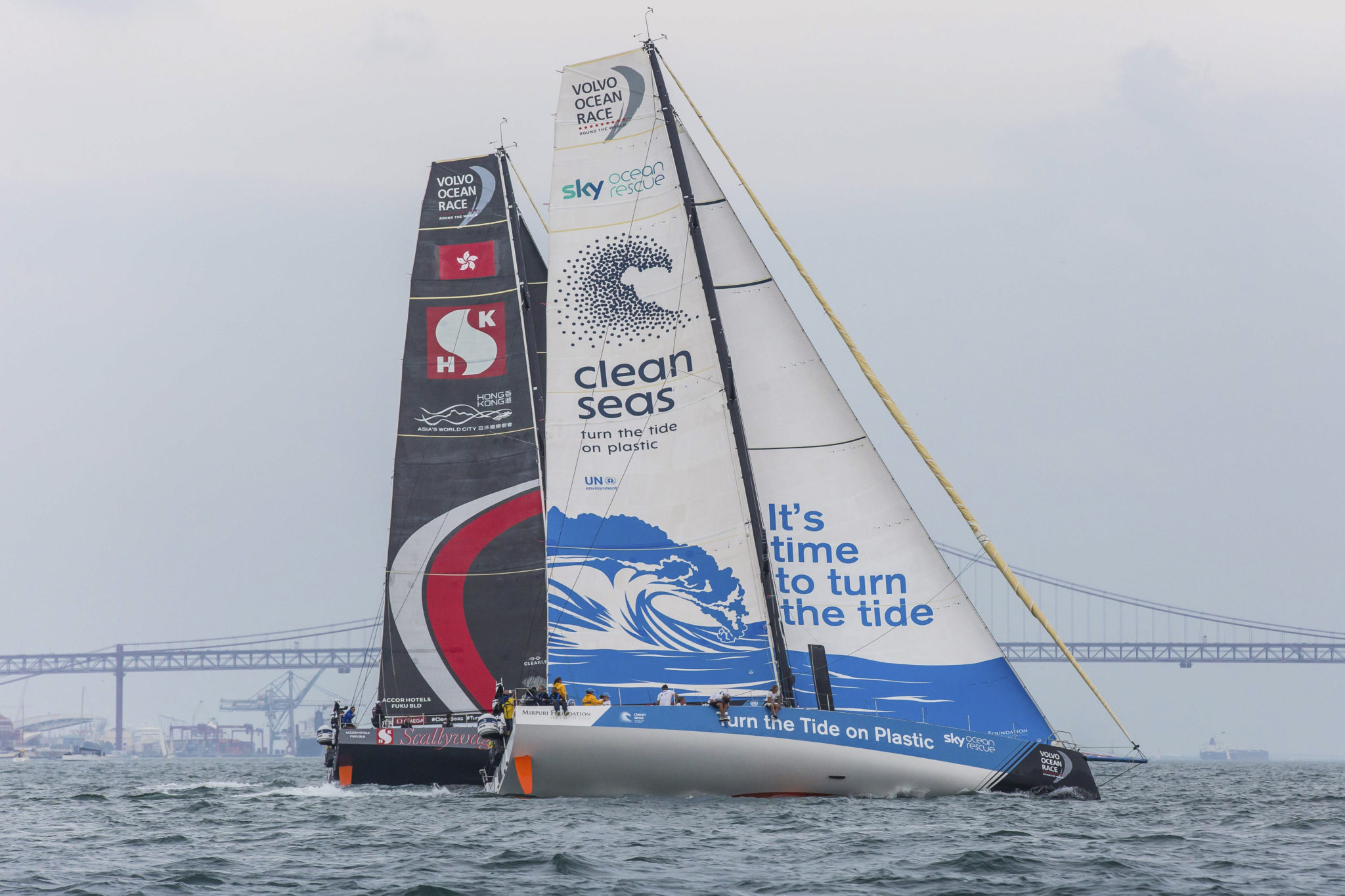 The Turn the Tide on Plastic A330 is partnered is a Volvo Ocean Race boat. Image: Mirpuri Foundation

Turning back the proverbial tide on plastics is, from an environmental perspective, a substantial but much-needed effort, with Mirpuri citing statistics that state at least eight million tonnes of plastic makes its way into our oceans. It then has a dramatic effect on wildlife, creating “dead zones” the size of the United Kingdom.

Because they cannot be seen too often, & because the tide may just be beginning to turn in terms of the fight against plastics, here – again – are Chris Jordan's canonical images of albatross chicks on Midway Island, their bodies rotted down around the plastic that killed them. pic.twitter.com/twpUDLQIsi

Hi Fly represents the challenges facing the world’s oceans visually on the A330, with a livery designed and created internally by the airline’s marketing department. A particularly striking black side represents today’s plastic-filled oceans and a blue side suggests cleaner oceans in a more positive tomorrow. The livery is expected to last through the end of the race in June of this year. 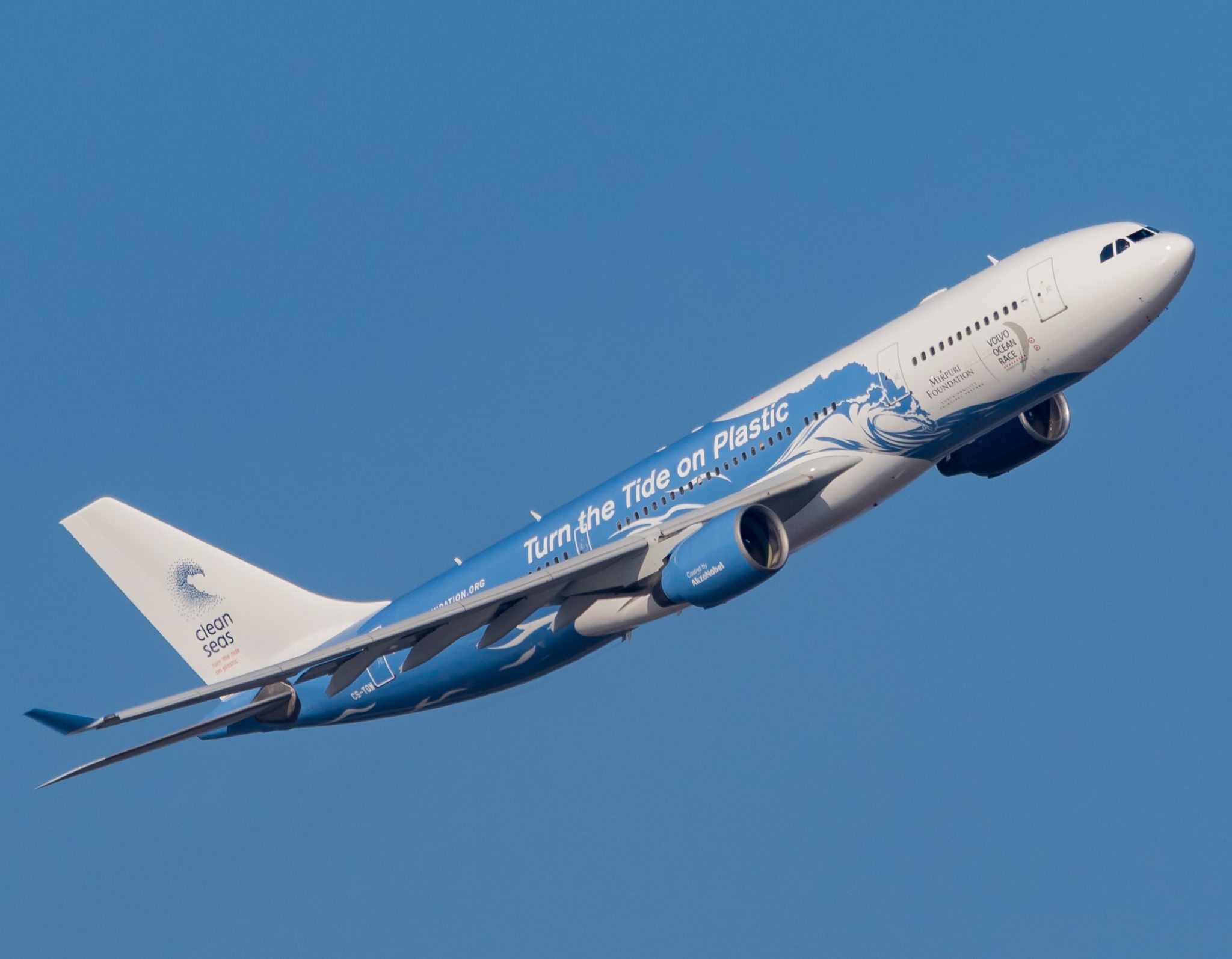 The blue side of the A330 highlights a more hopeful future. Image: Hi Fly – Leonardo Sanchez

The jet, registered CS-TQW, originally delivered to Swissair, and operated by a half-dozen carriers from Algeria to Vietnam, is currently jetting between New Zealand and Perth as part of Air New Zealand’s substitutions following engine issues with its 787-9 fleet, but has flown worldwide fulfilling Hi Fly’s contracts.

The very fact that Hi Fly’s wetleased fleet is seen in so many locations is a big plus for the livery and its global message. “It has been already in more than twenty destinations across the five continents,” Mirpuri says. “The countries visited by the aircraft include the UK, Belgium, Portugal, Spain, India, China, Russia, Nigeria, Brazil, Guinea, Congo, Guyana, Jamaica, USA, Canada, French Polynesia, New Zealand and Australia.”

Since the livery was applied, the aircraft has been in nearly constant service, with more than 2500 flights with a maximum of 266 passengers on board — let alone the number of people who will have seen the aircraft’s striking paint scheme from the ground or at an airport.

More widely on Hi Fly’s corporate social responsibility (CSR) agenda, the Mirpuri Foundation is the channel for much of the airline’s environmental work, which comprises both marine and wildlife conservation efforts. Mirpuri sums up the marine aims of his foundation as “projects that can help determine how to best protect and conserve marine species and ecosystems as well as how to better educate the public and lobbying for conservation law and policies.”

In addition to these conservation initiatives, Hi Fly also supports the foundation in its work in the fields of performing arts, social responsibility, plus education and research in the fields of medicine and aeronautics.

The foundation itself has a Hi Fly Airbus A340-300 painted black to raise awareness of the work it is doing, which includes an aviation training centre offering financial support to students with high potential but low financial resources, whether pilots, flight attendants, engineers, ground operations staff or flight dispatchers.

“Only by acting together we will achieve our ultimate goal to make the world a better place for future generations,” Mirpuri says. “I am incredibly proud to count on two amazing teams to do their best spreading our message not only in the sea but also across the skies.”