In responding to the market demand for premium economy — in the context of supply constraint among existing seatmakers in this end of the market — Aviointeriors is taking a three-product strategy. The Italian seatmaker is producing what chief executive officer Ermanno De Vecchi tells RGN is a “more traditional seat”, in addition to its current Canova recliner seat and the Adagio PE version of its upcoming business class product, as well as a range of older business class products.

The new seat, De Vecchi says, is planned “for traditional applications in a very short lead time. You need to follow the market, in any case. The expectations the customers have are very high in terms of lead times. We cannot tell them ‘no, sorry’. We need to equip ourselves in order to give them the correct answer. This is the approach we have had and we will have.”

Indeed, Aviointeriors’ six-month speed to market with its staggered Solstys clone Galileo suggests De Vecchi’s claim is to be taken seriously. And Aviointeriors is not just looking for the big name contracts either. “We are equipped to make the effort in order to achieve this expectation in little batches. We feel that we will be able to keep much more importance in the premium economy market due to that. It’s a reason why currently we are also working on the new premium economy seat, which we will present in Hamburg,” at the Aircraft Interiors Expo, De Vecchi says.

At Hamburg, expect also more information about Adagio PE, the non-fully-flat version of Aviointeriors’ latest business class product. Details are, quite literally, sketchy, with pencil drawings and a basic rendering the extent of the picture we have so far for the product. But, like the full business class version, the keys to Adagio PE are the stagger that takes passengers shoulders out of alignment with their neighbours, plus the privacy of a “dividing wall pulled back to enhance sense of larger space”, as well as the amenity of a “small console surface to the side of the passenger”. 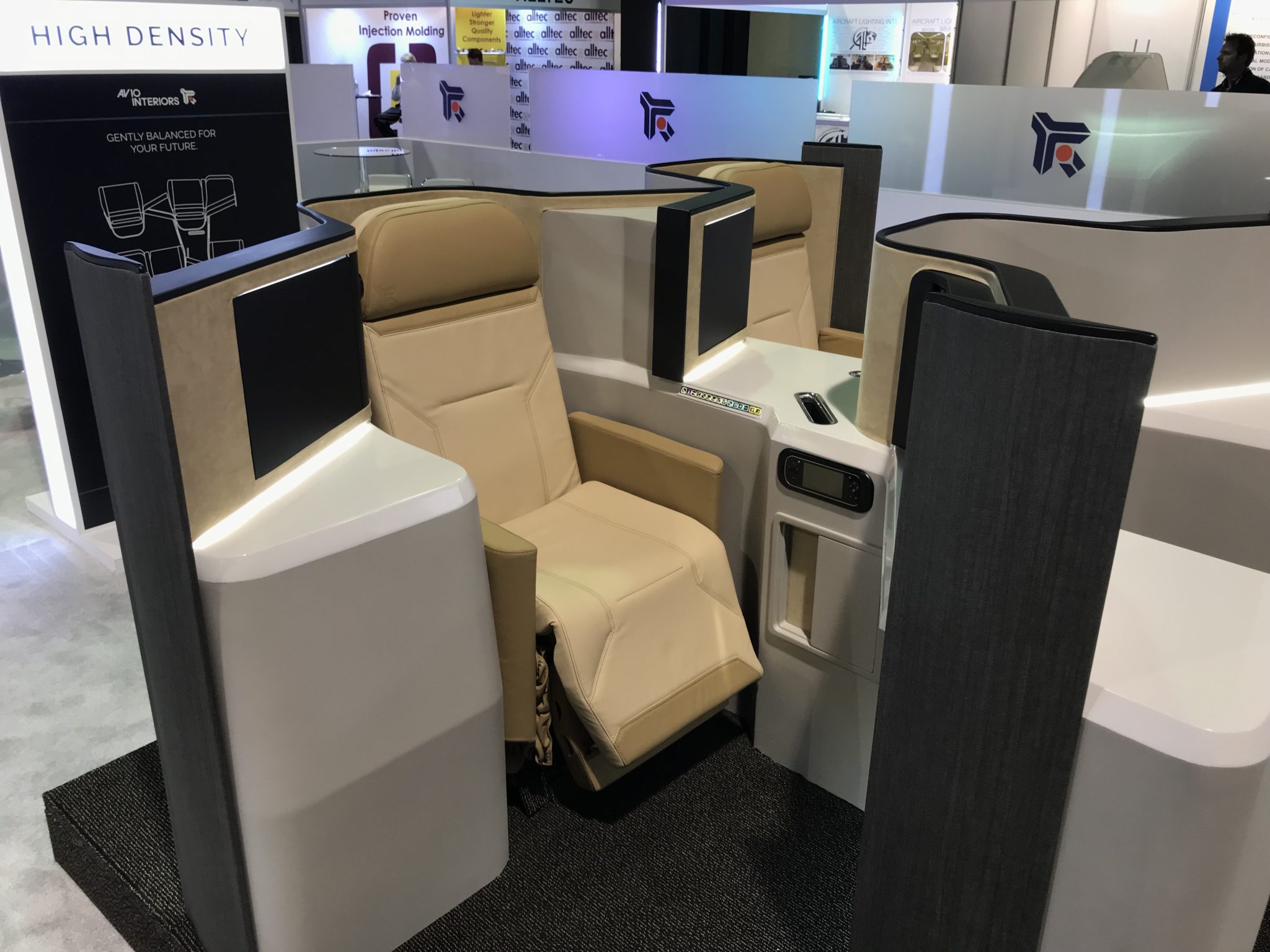 Interestingly, “the customer I mentioned for Adagio will also sign an agreement for Adagio PE, as we call it. We will be able to start production, full production in the end of next year,” De Vecchi tells RGN, which means that the airline will have both the full Adagio business class up front and its premium economy derivative in the middle of the plane.

“The customer realized that they will have not only the advantage from the maintenance point of view,” De Vecchi says, “but will also have an advantage from the look of the cabin point of view. You will have a first class or business class depending upon the customer, and then you can have a premium economy class with the same LOPA, with the same style, also with different basic seats.”

It’s an interesting proposition as the “comfort canyon” between premium economy and business class grows, largely due to the increase in space and privacy in business rather than in premium economy, which largely looks the same as it did when it was introduced in 1993-4 (by Virgin Atlantic or EVA Air, depending on who how you measure it).

Previously, airlines have tried not to bring too much of the design language of the business cabin into premium economy, in order not to dilute the appeal of business class — and of course the lucrative income that results from it. It will be fascinating to see how Aviointeriors’ customer (and any design partners they use in the creation and production of their business and premium economy seats) attempts to avoid upwards cannibalisation.