We live in a time when many aspects of the aviation experience are so ingrained into the cultural zeitgeist that they become fodder for comedians. Airline safety announcements — especially the requirement for airlines to demonstrate the use of a seatbelt — are particularly popular targets for derision, with George Carlin’s routine a firm classic. Even Virgin America’s well-known safety dance video rolls its eyes at the need to do so.

But the fact remains that passengers in survival situations often lose valuable seconds because, in a crisis, crash investigations show that human minds forget that the seatbelt works differently on an aircraft.

Indeed, more than one airline specifies the use of “release your seatbelts” rather than “unfasten” or “unbuckle” for shouted cabin crew wording during an evacuation because of the possibility that the first syllable of the latter two words is either unheard or does not register with disoriented passengers. 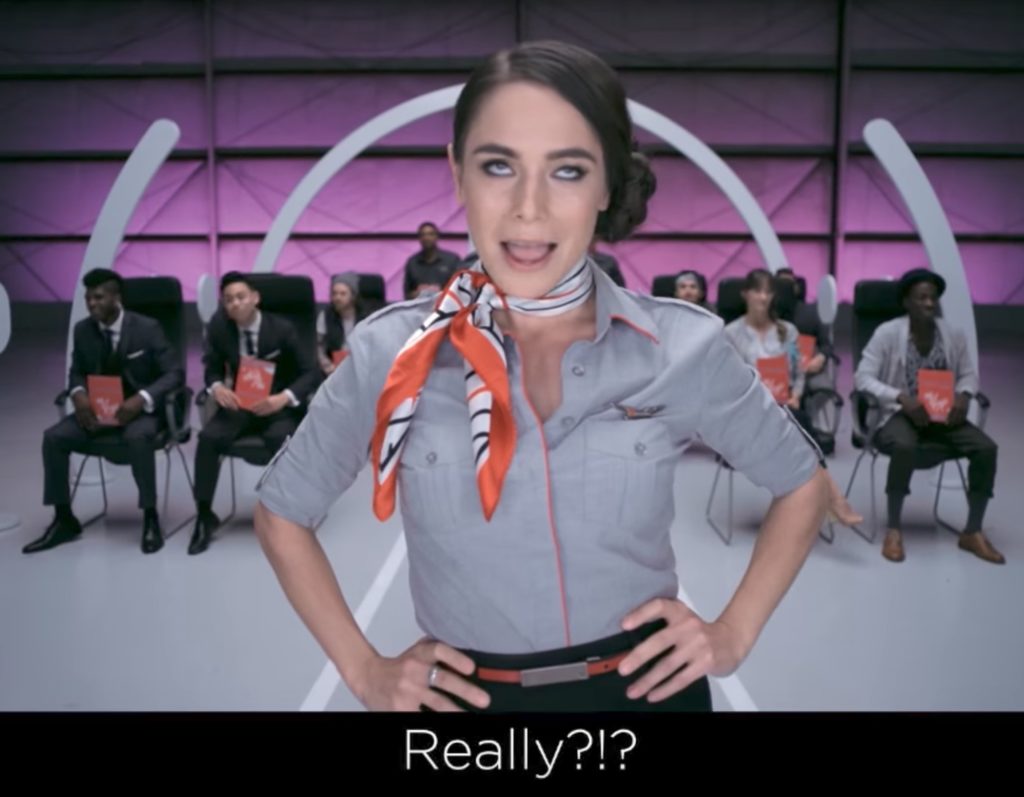 The Safety Dance may roll its eyes at the need to remind passengers about seatbelt use, but it saves lives. Image: Virgin America

But the old adage of a picture being worth a thousand words is a truism for a reason. Airlines are still required to perform either a manual or video-based safety demonstration, and to include how to fasten and unfasten a seatbelt — including where the mechanisms are different in premium classes, owing to variations in seat manufacturer, the requirement for in-seatbelt airbags to pass the head injury criterion in certification testing, or for other reasons.

These demonstrations are vital to communicating safety messages to passengers, and they are changing to adapt to modern times. In recent years, e-cigarettes have been added to the spiel, as have admonitions to passengers to leave items behind in an evacuation, and not to move their seat if a personal electronic device is lost within it, instead calling a crewmember. But even before the age of the viral advertising safety video, the operation of seatbelts was highlighted as a problem for emergency evacuations.

As just one example, in the March 1992 icing-related crash of US Airways flight 405, a Fokker 100 taking off from New York LaGuardia, resulting in 27 deaths, “some passengers tried to move from their seats while their seatbelts were still buckled, and other passengers had difficulty locating and releasing their seatbelt buckles because of disorientation,” a NTSB report noted [PDF].

It is clear that passengers do not always remember how to carry out what should be a basic task following an incident. It makes sense for airlines to be as crystal clear as possible about how to do so.

RGN scrutinised recent safety videos for more than forty major and smaller airlines from all corners of the earth for the location and context in which their safety videos demonstrate seatbelts. Almost a third of airlines showed seatbelts being fastened within the cabin and seat environment, which is likely to be the most useful in reminding passengers that seatbelts on a plane work differently.

Seven airlines’ videos showed seatbelts in a stylised or virtual environment that wasn’t exactly a cabin, but resembled one: American Airlines’ cabinesque office chairs, for example, or the (in)famous Virgin America safety dance.

Two videos showed belts outside the cabin environment, but not in an environment where other belts are routinely used that would potentially be confusing. These were LATAM’s skiers on a snowy virtual mountain, and Virgin Atlantic’s superhero cartoon.

Six videos, however, showed belts not in the cabin environment, but in an environment where other types of belt mechanisms might be used. These ranged from on a ferryboat (Singapore Airlines), in cars (Virgin Australia, Air New Zealand, Oman Air), in a golf buggy (United) and on a window-washing derrick (Qantas).

Airlines and regulators would do well to consider whether it makes sense to revisit the way this crucial information is supplied to passengers. A few seconds can make the difference between successfully evacuating an aircraft and death.