Hopping over the Channel to the Paris Air Show from Heathrow to Charles de Gaulle, I was delighted to spot an Air France Boeing 787-9 Dreamliner as a flight option alongside the usual narrowbody Airbus A320 family aircraft, and plumped for an inexpensively priced business class ticket since I was carting two full suitcases to Le Bourget (and am always one to try out a new product when available). The new Zodiac Cirrus seating, too, was a massive improvement over the usual Eurobusiness economy seating with the middle seat kept free — which, alas, I had on my return from CDG.

From a distance, the world in Air France business looks blue…and more blue. With a fair bit of grey and a few tiny splashes of red. It might feel a little unimaginative, but in the variety of surface materials, the shading of the blue-white-grey — and those red accents — the overall effect is generally elegant. 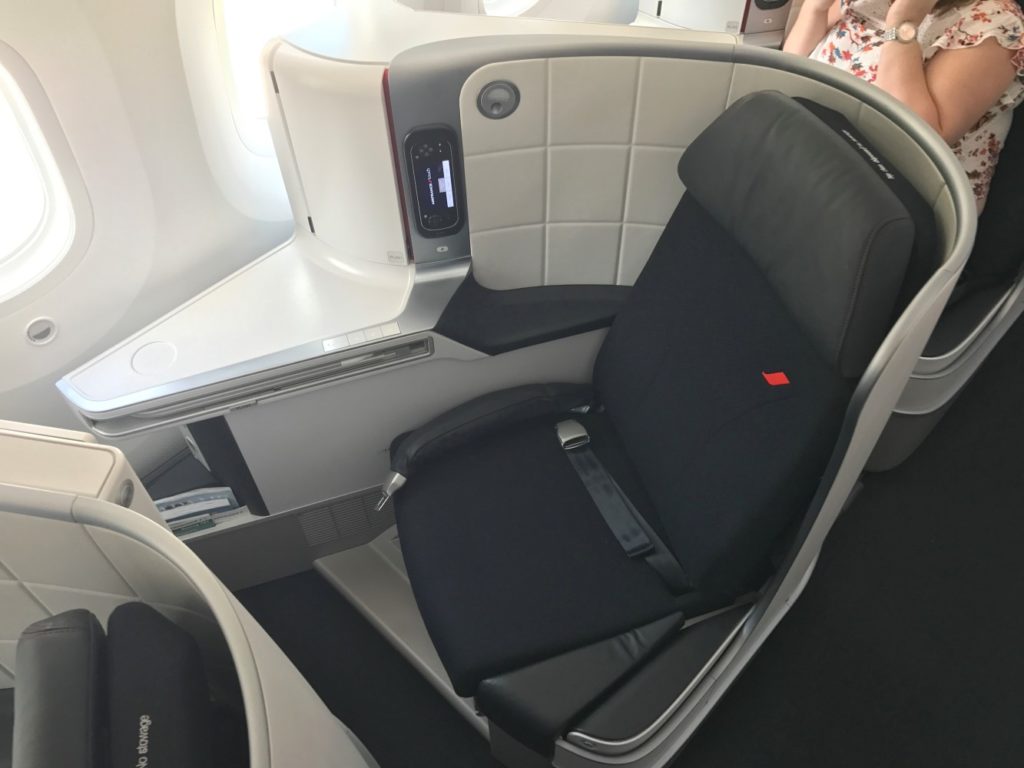 Small flashes of red match are eyecatching in their sparseness. Image: John Walton

The way the grey edge surface around the top and side of the seat shell extends into the silver panelling that contains the inflight entertainment handset socket, and continues down the seat control strip, for example, ties the design together.

The stitching that creates the soft rectangles in the shroud is attractive, and the red cheatline between the inflight entertainment handset panel and the side cupboard is pleasingly on brand. 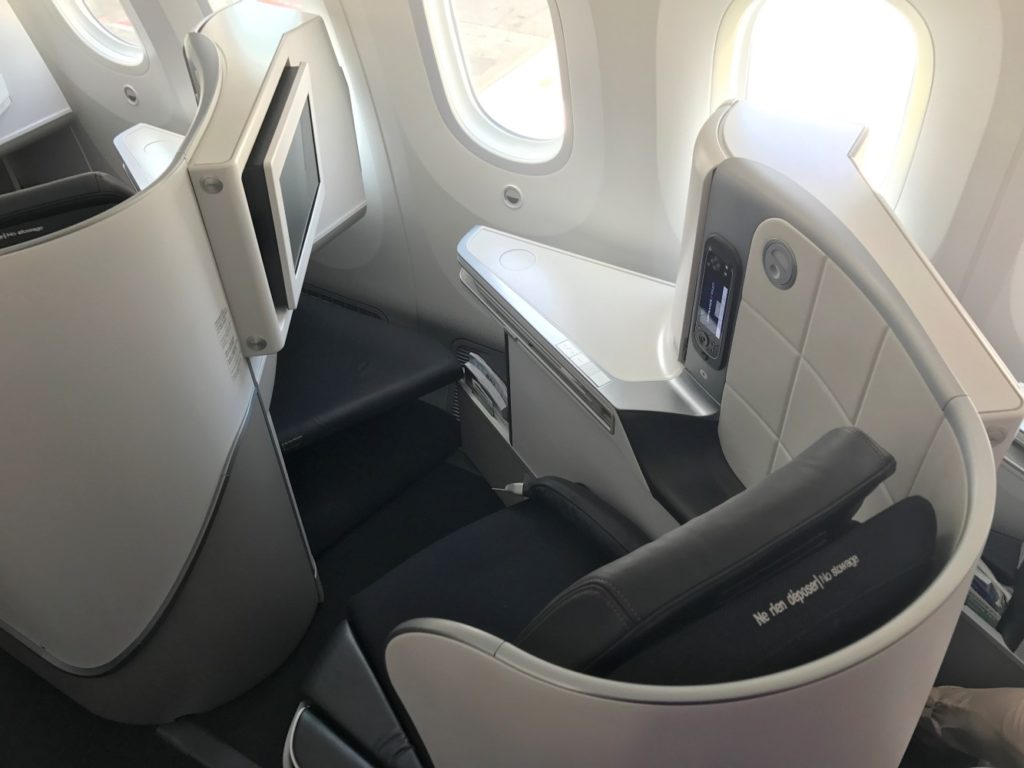 Following the silver flashing around the seat, it’s clear that there’s been careful design thought put into the product. Image: John Walton

A delightful — and useful! — surprise is the elastic strapped holder in the small side cupboard, ideal for phones, glasses and other necessaries. This is smart design innovation that improves the passenger experience. 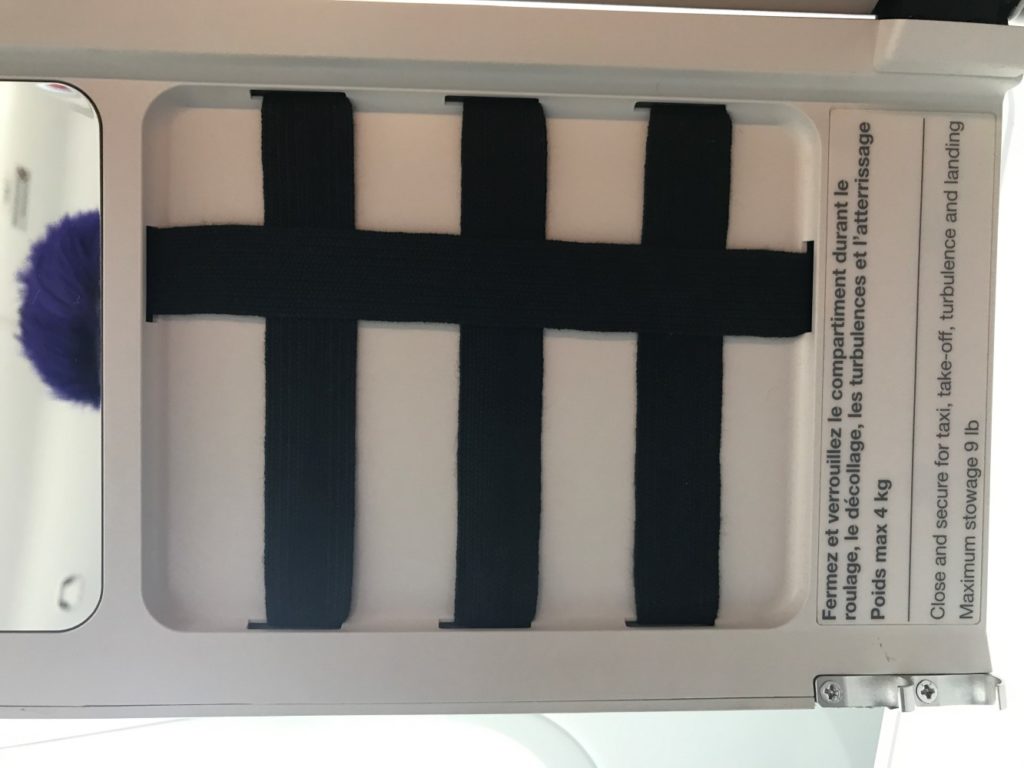 There are flaws with some of the seat design, however.

The major flaw is a lack of adjustable Z-bed style legrest. Instead, the oversized ottoman is intended to serve. For an airline that operates a number of non-overnight flights with these aircraft, not having a La-Z-Boy style recliner seat is an unfortunate omission. Instead, the ottoman is oversized so that the seat reclines to meet it for bed mode. 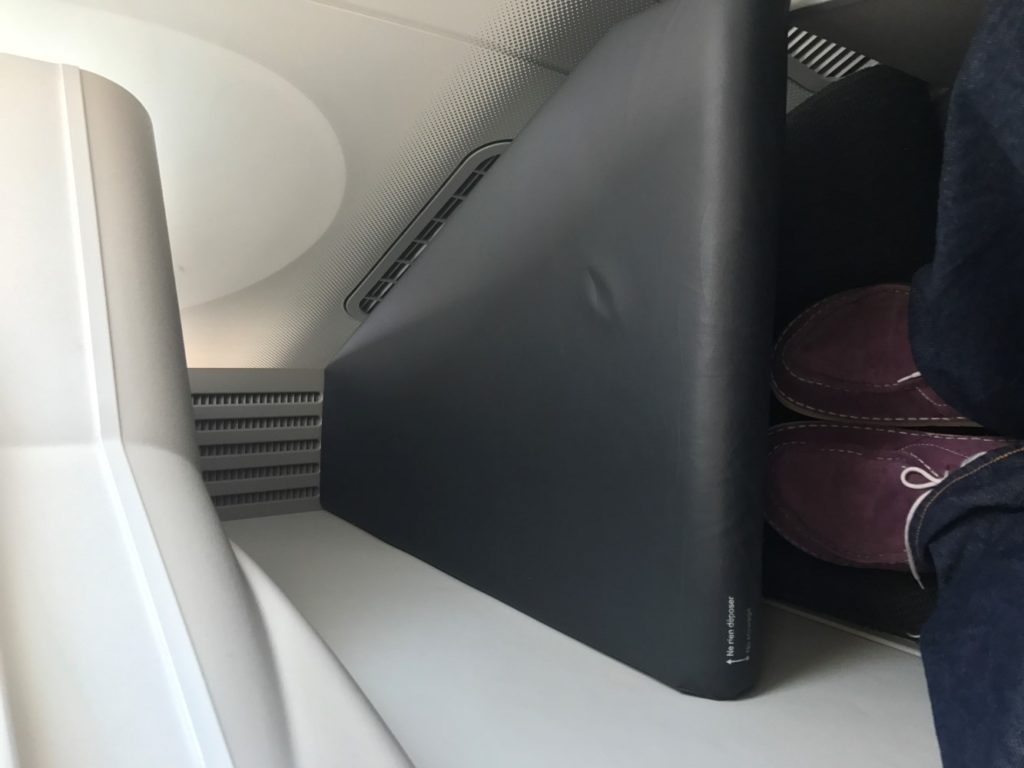 Alas for the lack of legrest. Image: John Walton

In a safety concern, I nearly lost my phone down the side of the seat since. Unlike earlier implementations of the Cirrus seat, there is no shelving between the seat and the sidewall, meaning personal belongings (plus dirt and assorted detritus) can easily end up slipping over the ineffective lip of the side console. This apparent oversight is surprising given Air France’s past problems with personal devices slipping between the gaps of a prior-generation 777 seat product.

From a usability point of view, locating the seat controls at a point where taller passengers’ elbows will naturally fall — at least, my 6’3”/190cm elbows did — could have used a rethink. At several points in the sub-one-hour flight the seat surprised me by moving forward as I rested my elbow on the surface. These controls could also use an improvement in contrast — white on silver is difficult to make out — and the metal surfaces around the control buttons are not wearing well, even on this four-month-old aircraft.

The printing on the button releasing the side cupboard, too, was surprisingly worn for an aircraft delivered so recently.

While it’s impressive that the main table can be fit into so small a side console — the 787’s narrower cross section requiring a redesign compared with wider jets like the 777 — the table itself was surprisingly small when unfolded. 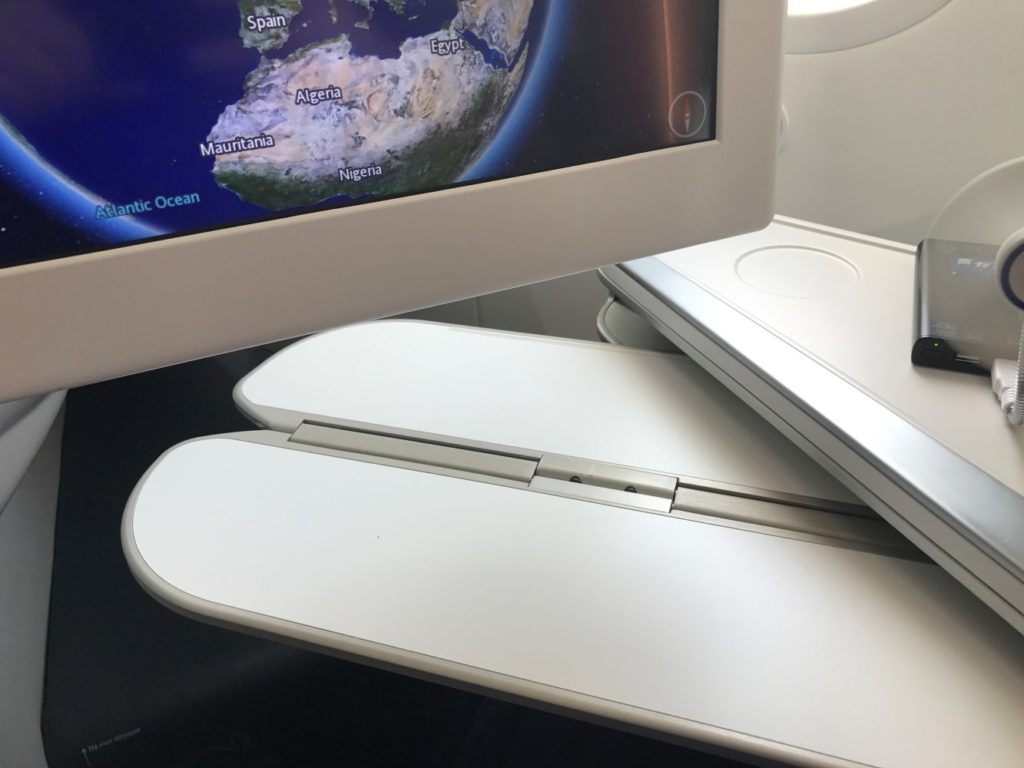 Lastly, I found the inelegant and clunky way that the inflight entertainment unit attached to the seat wall in front disappointing in its integration. This is what passengers will be staring at for a significant proportion of their flight, and it’s simply ugly. 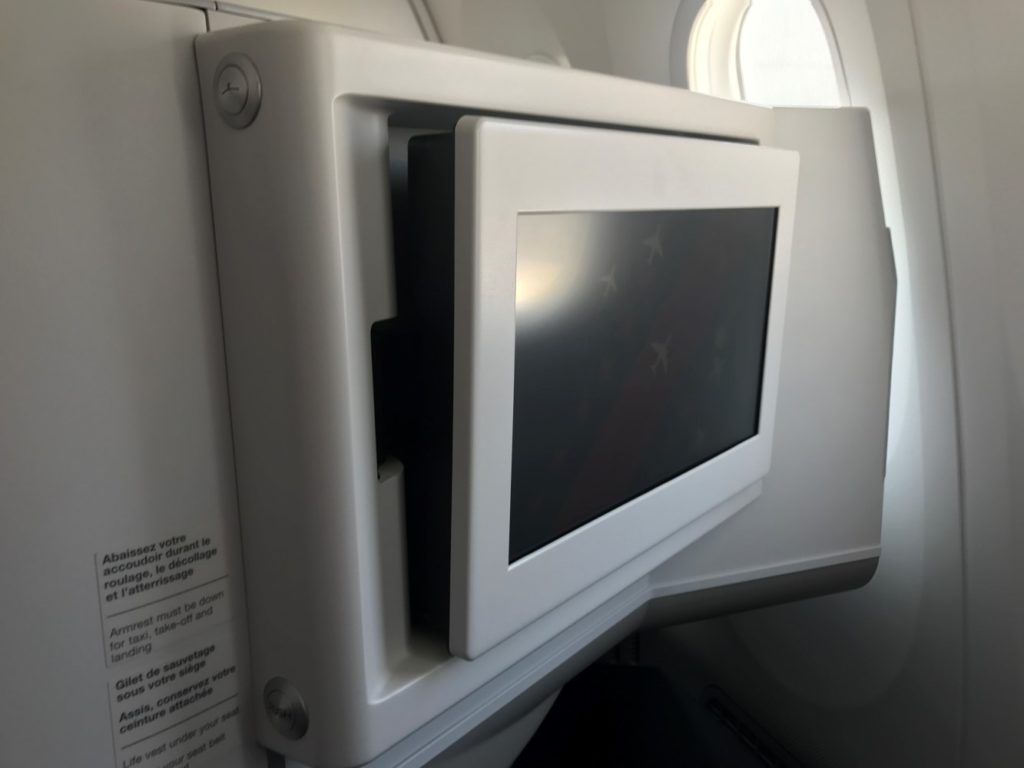 It’s hard to call this IFE housing anything but clunky. Image: John Walton

Overall, it struck me that the interior designers at Air France have done an excellent job making the product feel as premium as possible, although it feels a little disappointing that some of the inelegant aspects of the hard product haven’t been designed out.