In a bold move towards improving the survivability of aircraft flight recorders for commercial aircraft worldwide, Airbus is working in partnership with L3 Technologies and DRS Leonardo to combine and duplicate audio and data recorders, together with a automatically jettisoned recorder for use in longhaul and extensive overwater flight operations.

To start, the partnership is combining the flight data recorder with the cockpit voice recorder in one smaller device, the cockpit voice and data recorder (CFDR). The reduced size enables an Airbus A320 family aircraft to carry two of the fixed, crash-protected, combined recorders instead of one of each of the separate black boxes, increasing redundancy and the likelihood of readable information surviving a crash.

The data storage of the CFDRs will also increase, enabling a total of 25 hours of voice recording, and increasing the amount of data that is available to investigators, pursuant to aircraft tracking standard requirements from UN body ICAO and European safety regulator EASA. Current recorders are only required to contain two hours of voice recording.

For longhaul aircraft or those with significant overwater missions — including the A321LR, A330, A350 XWB and A380 — the partnership has designed the automatic deployable flight recorder (AFDR) as a separate jettisonable and float-capable unit automatically deployed in the event of water contact or what Airbus calls “significant structural deformation”. This would not, for example, include a hard landing, collision with catering truck, or similar mishap, the partnership confirmed in a press conference at the Paris Air Show. 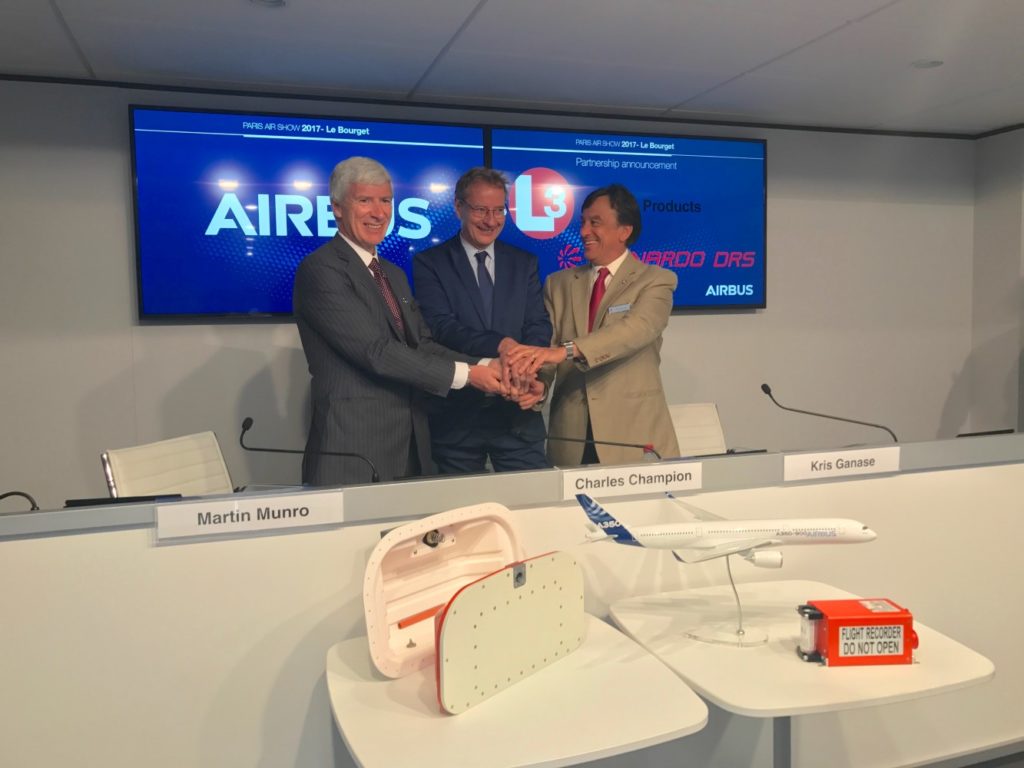 The deployable AFDR will also contain 25 hours of cockpit voice recording alongside flight data recorder information, plus an emergency locator transmitter to aid the rescue and recovery effort. “The deployment mechanism for the recorder is a spring that’s preloaded,” Martin Munro, VP and general manager of DRS Leonardo’s Canadian facility confirmed.

“When a series of ball bearings are released, the shaft comes up and causes the recorder — the beacon airfoil unit, as we call it — to release from its  tray. There are two mechanisms for triggering the deployment of the recorder. One is a loop in the aircraft that detects the structural deformation of the aircraft, and that triggers the deployment. There’s also a hydrostatic switch built into this unit, and as the unit goes down below two meters in the water it will automatically trigger the release.” 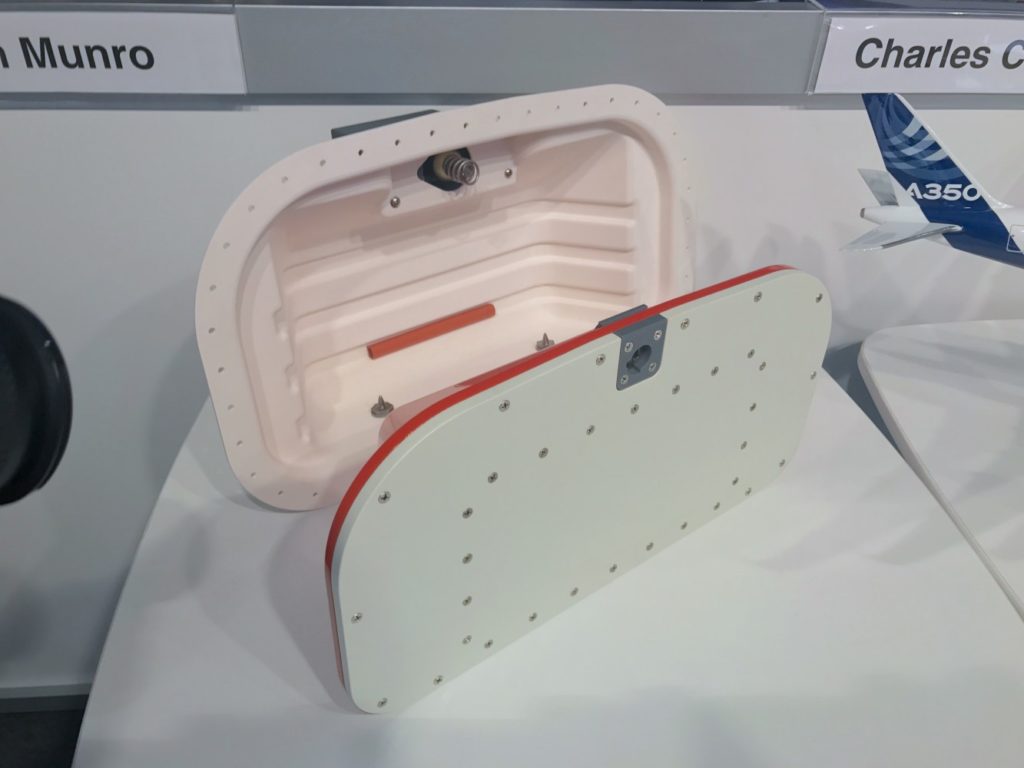 The deployable recorder sits in a tray and is automatically ejected in the event of a crash. Image: John Walton

Airbus expects to receive certification and launch the system in 2019, initially on the A350, Airbus’ commercial EVP of engineering Charles Champion confirmed.

However, and surprisingly, Champion told Runway Girl Network that this work is going on in parallel — rather than integrated with — work to transmit the information written to the recorders over inflight connectivity in the event of the detection of abnormal flight.

“Connectivity is managed in a different manner,” Champion said. “This is only storage, passive in a way. In parallel we are working with Rockwell Collins in order to be able to transmit data. This is a solution that is not on all aircraft — it depends a lot on what is the connectivity solution chosen by the airline. The challenge is to have full connectivity coverage in order to transmit the data. I think they are complimentary. We are discussing also and working currently in terms of transmitting data, but not associated with this. They are two separate avenues.”

While Kris Ganase, President of L3 Aviation Products Sector, noted that “right now we are just talking to Airbus” regarding the technology, Champion confirmed that Airbus does not intend to keep the technological advances in recorder type and audio quantity to itself: “We have no patent on that, and as it is an improvement of safety, this is free for L3 to discuss with other manufacturers if they wish to introduce it on their aircraft.”