What if I told you that, for the equivalent of ten US dollars, you could upgrade from narrow 17” ten-abreast economy to spacious, comfortable 8-abreast premium economy style seats? On Japan Airlines, you can, and I flew the world’s busiest air route by number of passengers carried to take a look at the #PaxEx involved.

Tokyo Haneda to Sapporo New Chitose has long been famed for its ultra-high capacity domestic widebodies, from the Boeing 747 to today’s 777 fleet. JAL uses nearly twenty-year-old 777-200 (not -ER) aircraft that it acquired through absorbing domestic carrier Japan Air System in 2006, outfitted with six-abreast first class seats up front, eight-abreast class J in the middle, and many rows of 3-4-3 economy with few seat monuments to break up the view. This aircraft feels simply cavernous, especially for a one-and-a-half hour flight.

Class J isn’t business class in any sense other than the seat and for some frequent flyer mile accrual purposes. There’s no lounge provision or airport priority, and after trying to check in at a kiosk it turned out I should have printed a 3D barcode at home to scan, so I was ushered politely to a pleasant and efficient desk agent. JAL’s booking and checkin systems were the one disappointment in this experience: the website booking path feels like someone’s GeoCities homepage from 1997, and there’s no mobile boarding pass system (or if there is, it’s hidden in Japanese-only menus and I never saw a single person using it).

JAL’s Haneda terminal is small and efficient, and I was through security in moments. While there are a few restaurant options, I decided instead to pick up a drink and a rice ball from one of the many convenience stores and watch the incredibly fast aircraft turns for which Japanese airlines are rightfully renowned.

Today I'm in Class J, the uniquely JAL domestic semi-business class (2-4-2 recliners on the 777, not 3-4-3 down back. #thatjohnonJL #PaxEx pic.twitter.com/ohrvqLyye6

I was impressed by the amount of ranked seating available, and by the thoughtfulness of travellers, none of whom took up two or three seats with their baggage. Indeed, the permitted size of carryon bags in Japan is smaller than internationally, which made a big difference to the passenger experience on the ground and in the air.

My 3:30pm departure took a ten minute delay, and JAL expects to board this 777-200 in ten minutes. I bet they can do it, too… #thatjohnonJL pic.twitter.com/hFlcE05lVA

Despite a delay of five minutes to boarding, there was a refreshing lack of “gate lice” passengers milling around near the podium and getting in the way.

On boarding, Door 1L was used for first class and Class J, with door 2L for the rest of the plane. On arrival in Sapporo, interestingly, one door was used for each aisle, with galley curtains preventing crossover and speeding up the process. I found my seat, in the section of Class J seats behind 2L abutting the main economy seats (no bulkhead here) and popped my rollaboard overhead, marvelling as a 375-seater aircraft filled up completely in ten minutes.

Anywhere else, this would be a #PaxEx miracle. Boarding started: 1527. Boarding completed: 1537. #thatjohnonJL pic.twitter.com/mPePGGBFBq

The seat was very comfortable, even for a passenger rather taller and broader than the Japanese average, similar to a very generously pitched eight-abreast 777 international premium economy seat, with decent recline and legroom, although the legrest was clearly designed for people with shorter femurs than mine.

In the air, Gogo’s Ku-band inflight connectivity switched on and performed very well throughout the flight despite being free on a limited-time basis — normally I’d expect it to be swamped with demand, but it worked very well for browsing and even let me watch some 720p YouTube.

The crew passed swiftly through with a beverage trolley, with paper cups offering the same choice of nine non-alcoholic beverages as in regular economy.

I enjoyed a small cup JAL’s faintly disturbingly neon green Sky Time, but was pleased that I still had a bottle of water in my bag — since all the beverages are poured from larger bottles or cartons, and the crew are serving 375 passengers in about 60 minutes, there was no opportunity for “the full can” or a refill. (I’m sure, though, that if I’d popped up to the galley, they’d have poured me another one.)

Arrival at Sapporo’s New Chitose Airport was remarkable for three reasons: firstly, the bowing ramp agents standing in the jetbridges awaiting the aircraft, secondly that every single bag arrived on the belt with the handle facing outwards for passengers’ convenience, and thirdly that there was a “recombobulation station” at the baggage claim doors with recycling bins for passengers to remove tags and any wrapping from their checked bags before proceeding with their journey.

All in all, I wish every 90-minute flight I take were like this one.

Yes, of *course* the flight attendant ensures that the JAL logo on your glass of Sky Time is facing you. #PaxEx #thatjohnonJL pic.twitter.com/WQtZD13Rmv 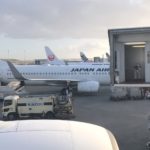 A bow welcomed us to Sapporo. Image: John Walton 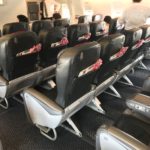 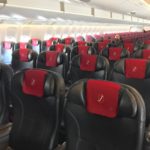 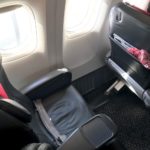 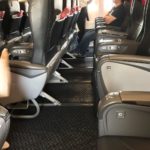 I didn’t see anyone using the onboard radio IFE, but quite a few people were on the Gogo Ku-band wifi. Image: John Walton 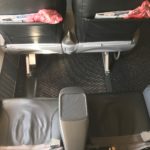 I was impressed by the pitch of Class J. Image: John Walton 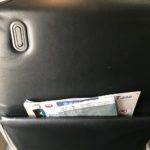 While not exactly full featured, Class J’s seats come with a coathook and spacious pocket big enough for a waterbottle or laptop. Image: John Walton 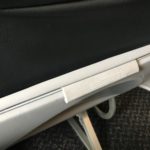 This small bungee and tag allows a suit jacket or coat to be folded over. Image: John Walton 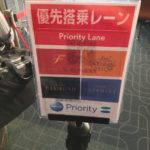 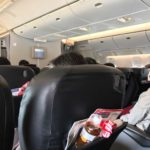 Most passengers seemed to bring a snack and drink with them. Image: John Walton 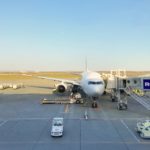 JAL’s nearly 20-year-old 777 felt fresh and new inside and out. Image: John Walton 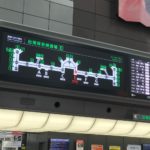