Delivering true innovation in business class is increasingly difficult. Airlines must balance a trio of demands: privacy, comfort, and profitability. And the product must also deliver at least a smidgen of luxury, particularly for airlines that are retiring the first class cabins on their intercontinental fleets.

As if that wasn’t hard enough, a segment of the market remains keen on comfort when traveling as a group, a challenge that typically works counter to the privacy goal as those passengers want to interact with each other on board while (hopefully) not disturbing other travelers. Qatar Airways is eager to deliver on that sweet spot. After nearly two years of hype, the carrier introduced its new Qsuite product at ITB Berlin 2017, with the aim of drawing in customers from both its competitors in the Middle East as well as from legacy airlines in the United States, Europe and Asia.

The Qsuite offers privacy in the form of a sliding door, allowing a traveler to be isolated from others while seated on board. Comfort comes in the ability to extend to a lie-flat bed with direct aisle access for all passengers. And luxury comes from the ability to convert pairs of center seats into a “double” bed, an option previously reserved for first class suites. For groups of three or four the center block can be further adjusted, opening up to create a family room or conference room on board. 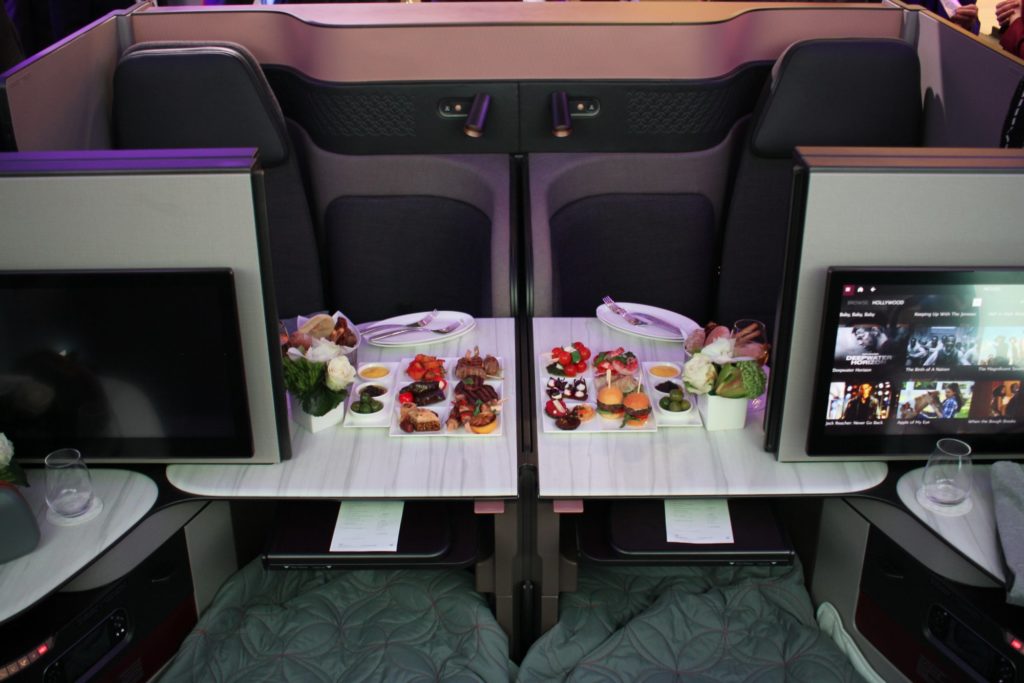 Communal flying can be supported with the block of four. Image: Seth Miller

As I tested the seat during the trade show I was impressed by its finishes, and the creativity of the seating layout. I’ll favor the rear-facing window over the block of four in the middle, but that’s a personal thing.

For a family of four traveling together, I think the product is hard to beat. Especially if there are younger kids involved and the parents want to keep them close and comfortable. But I also found myself questioning the use case for business travelers.

Putting aside the potential noise issues of conducting a business meeting in the middle of the cabin, the logistics associated with ensuring all four passengers can face each other are challenging. Dropping the divider between the bed pair is a manual process that flight attendants perform, typically during the turn down service. Switching from meeting space to bed – and putting the divider back -would potentially be disruptive and I cannot imagine too many business travelers wanting to cuddle with coworkers in the double bed.

The slight stagger in the seats (which allows for the foot wells to overlap and maintain density of seats in the cabin) also creates an awkward angle for the forward-facing passengers when the space is set-up for groups. The seats are extra wide at the shoulders but when a traveler slides in to the middle to be able to see the others in the group they must face slightly outwards; it is not the greatest of ergonomics.

It is also unclear what will be the advance assignment policy for these seats. If I want the cuddle seat pair for travel with my wife, can I be bumped out of those seats if a family of four books later? Not that getting seats together is ever a guarantee, but in this case the company is marketing the four-seat product differently. 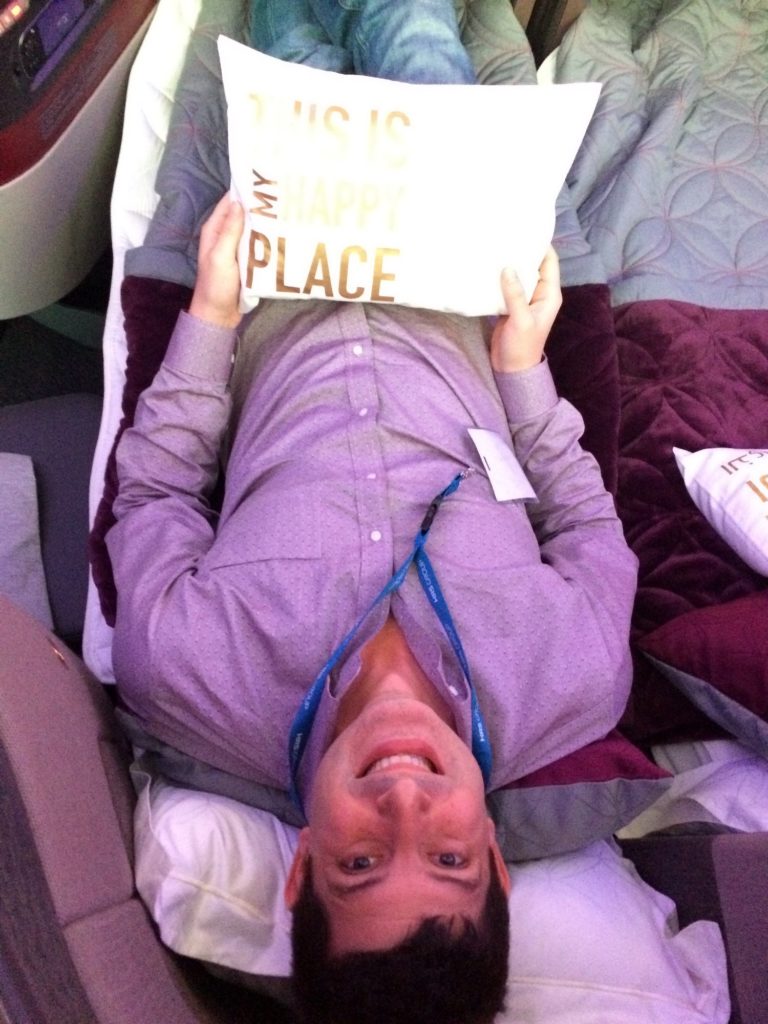 “This is my happy place” is the slogan Qatar Airways is using to launch the Qsuite product and I was definitely happy in that seat. Image: Seth Miller

As for profitability, only time will tell, but the cabin density remains consistent with other business class products meaning that Qatar Airways is at least competing from a reasonable starting position.

Qsuite was not the only business class product on display at ITB Berlin. United Airlines brought its Polaris mockup to the show and the responses I heard from visitors to the booth were mostly positive. That is good news for United, though its celebrations must be tempered as the carrier’s manufacturing partner Zodiac announced last week it is “still dealing with some industrial issues, essentially in the UK (Cwmbran), generating significant disruptions and delays that are currently being addressed.”

United needs these seats ASAP, both for its 14 new Boeing 777-300ERs to be delivered in the first half of 2017 and also for the company’s retrofit project set to begin in the second half of the year.

United CEO Oscar Munoz addressed the issue during a recent investor presentation, stating that the airline is “not happy” and that it has employees on site at the Zodiac facility, working to expedite delivery of the seats. More specific details on any delays are not yet known.

Aussie indie Girl Asleep is asleep at the wheel