Since 2015, Air France has been slowly refurbishing its narrowbody Airbus A320 family of aircraft with new B/E Aerospace and Recaro economy class seats, adding several rows to each fleet type and reducing seat pitch to a snug 29”.

Now down to the last few remaining A321s, Air France has added a slight #PaxEx twist to its plan. For its 11 Airbus A321s that operate medium-haul flights, USB ports are being added to each armrest from nose to tail.

With in-seat power still a rarity among European narrowbody fleets, Air France has bucked a stubborn trend. The modifications will run through April. The solution broke cover on social media yesterday.

USB in the armrest. First I've seen that. Convenient. pic.twitter.com/sYjjy0j5B1

“Air France considers USB as an essential asset and necessary component of the IFE offer,” says Air France spokesperson Maxime Patula. “Individual USB port is also integrated in the definition of the standard of future aircraft.”

Patula also confirms that USB ports will also be coming to the first batch of medium-haul A320s as part of a second round of modifications by the end of 2017.

At the same time, Air France has quietly rolled out inflight entertainment on select medium-haul flights. Well, sort of. The carrier has not actually installed seatback screens or even a streaming system of any sort. Instead, it has become the largest airline, by far, to offer “pre-download” content. Through an updated version of the Air France Press app, passengers can download movies and other content to their own devices within 30 hours of flying. The content is then unlocked during the flight without any hardware installed on board the aircraft.

Asiana reveals its Airbus A350, complete with Wi-Fi and a new cabin

Elsewhere in #PaxEx, ahead of its March debut, Asiana has revealed details about its Airbus A350 cabins, including some surprises. The A350 will be Asiana’s first connected aircraft, offering both inflight Wi-Fi and GSM roaming services via Panasonic’s Ku-band platform. Pricing details have not yet been announced.

Additionally, Asiana’s A350 will be its first aircraft to feature extra legroom economy seats (not to be confused with a true premium economy cabin). Seats in the new ‘Economy Smartium’ section will be pitched at 36″, compared to 32-33” in economy. Economy Smartium passengers will also receive access to Asiana’s business lounges at Incheon, as well as an amenity kit loaded with slippers, a sleep mask, and dental kit.

Finally, UK-based leisure airline Thomas Cook has gone all in on streaming entertainment, bringing dual solutions to its core and leased fleet. The core European fleet will see PaxLife’s streaming system installed, while its leased ACMI fleet will have mobile AirFi portable units dropped in before flights.

Both solutions will offer a mix of free and paid content. Streaming entertainment will also be coming to Thomas Cook’s leased A330 from Air Tanker, though the installed solution has yet to be announced. 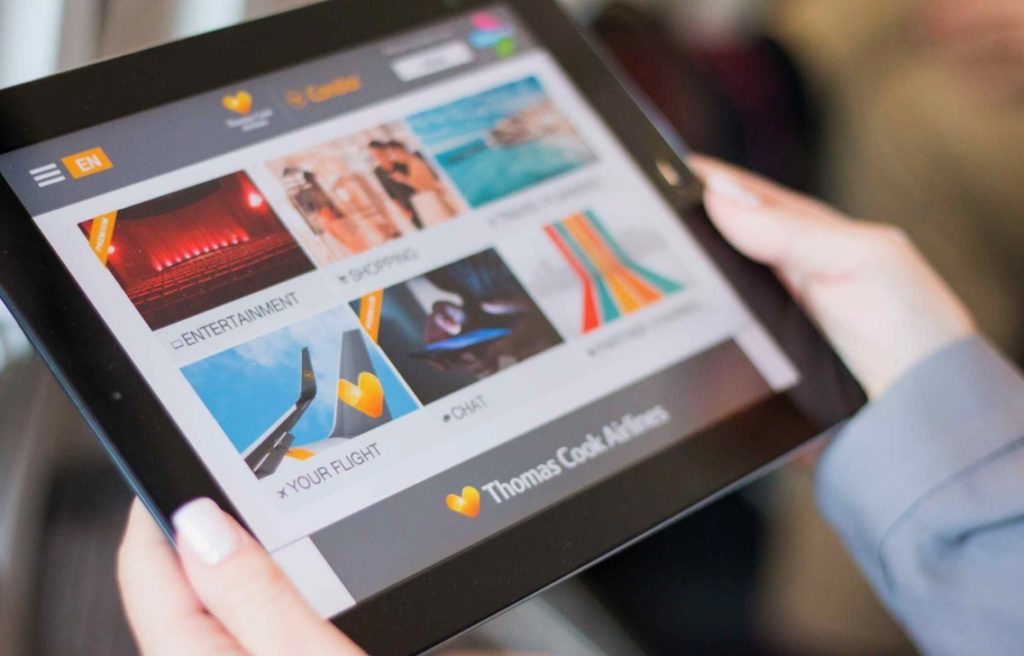