Non-francophones may never have heard of Air Caraïbes, the French Caribbean airline serving the leisure market between Metropolitan France (the European bit), Guadeloupe and Martinique. Previously, it hasn’t been a #PaxEx superstar either, with its ultra-high-density nine-abreast seating on its Airbus A330 fleet. So it’s not particularly surprising that Air Caraïbes is the launch customer for the ultra-high-density ten-abreast configuration of the Airbus A350 (indeed, we predicted as much). But the airline is also pushing the boundaries of premium economy and business class, and in doing so it’s changing the playing field for the rest of the industry.

To set the context: Air Caraïbes currently operates three 355-seater A330-300s and one 315-seater A330-200 for its longhaul services from France to the Caribbean.

So, in economy, the A350 is a slight downgrade, but not much. 16.5” on the A330 vs somewhere around 16.4” on the A350 is, while not ideal, hopefully mitigated by new seats and the distraction of on-demand inflight entertainment. In previous years, Airbus suggested that ten-abreast on an A350 gives a 16.4” wide seat, while more recently it has claimed is it working towards offering close to 17”. But whether or not they slice two thirds of an inch per seat off the armrests and aisle, the fact remains that fitting ten people into a space where nine fit comfortably is going to be uncomfortable.

The Classe Caraïbes section (which is really just economy seats, but in context is relatively pleasant) sees an upgrade, to the 3-3-3 layout A350 economy class standard of 18” wide seats. Nine-abreast A350 economy is, as a rule, a little better than 2-4-2 A330 economy. The problem is that, like Delta and a few other airlines with extra-legroom economy sections that sell these as premium economy-coded products, passengers comparing flights are not advised that these seats are not proper premium economy.

We are live from @aircaraibes 1st #A350. Take a look at our efficient business class seat EQUINOX 3D pic.twitter.com/ObcmahRWco

But it’s the Classe Madras business class that is really piquing my interest. Air Caraïbes has decided on Airbus subsidiary Stelia’s Equinox 3D seats in the same 2-2-2 configuration as their older 58” recliners — and the minimum pitch for Equinox 3D is, you guessed it, 58”.

Now, Equinox 3D isn’t exactly the most spacious of seats, with many passengers finding it discomfiting to be either elevated above or lowered beneath their seatmate. Philippine Airlines decided against continuing their Equinox 3D experiment in favour of going upmarket with Thompson Vantage XL. And while it doesn’t offer direct aisle access, like Hawaiian Airlines, Air Caraïbes’ largely leisure-focussed market may not mind if the midnight clamber from window seat to aisle is over a travelling partner rather than over Pat from Accounting.

Meanwhile, European charter carriers operating similarly sized aircraft on similarly leisure-focussed routes have their own opaquely-monickered front cabins made up of premium economy style recliner seats rather than business class style flatbeds. With AirAsia X looking to re-enter the European market, and with Tony Fernandes’ team’s love of tweaking the #PaxEx noses of full-service competitors’ hard product, is this the first turn in the direction of fully flat beds for premium economy prices? 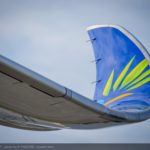 A bright and breezy holiday brand, but now with some really interesting PaxEx. Image: Airbus 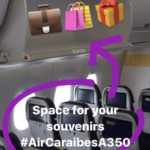 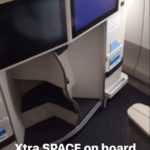 Airbus may have massaged the seat width numbers by offering this très petite armrest, but 10-abreast is still very tight. Image: Airbus 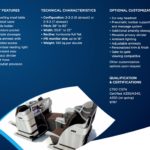 Denser flat beds are edging down to the bottom of the market. Image: Stelia 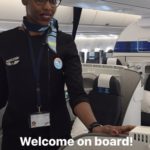 In France, as elsewhere, the upmarket leisure traveller has more options than ever. Image: Airbus