American Airlines Chief Pilot Kathi Durst has excelled throughout her 35-year aviation career, from her seven years in the United States Air Force through her twenty-eight years at American. As someone who has been open about her sexuality — Durst identifies as a lesbian — through some of the most difficult times for the LGBTQIA community, Durst’s story is a lesson in never giving up in the face of the word ‘no’.

Durst’s Air Force fighter pilot father was the inspiration for her to fly, she says, but “it was my mother who encouraged me to apply to the Air Force Academy for the second admitting class with women, the class of 1981. While I knew I was a lesbian at the age of three, I didn’t have my first girlfriend until I was a sophomore at the academy and certainly wasn’t out!”

“Many of the men at the Academy did not like the fact that women were now their classmates and colleagues,” Durst explains. “But, for the most part, I took the attitude that the laws had changed, women were here, and it wasn’t my issue to deal with. I was only 17 years old when I entered the Academy, and this was perhaps a sophomoric attitude, but oddly one I have carried throughout my aviation career.” 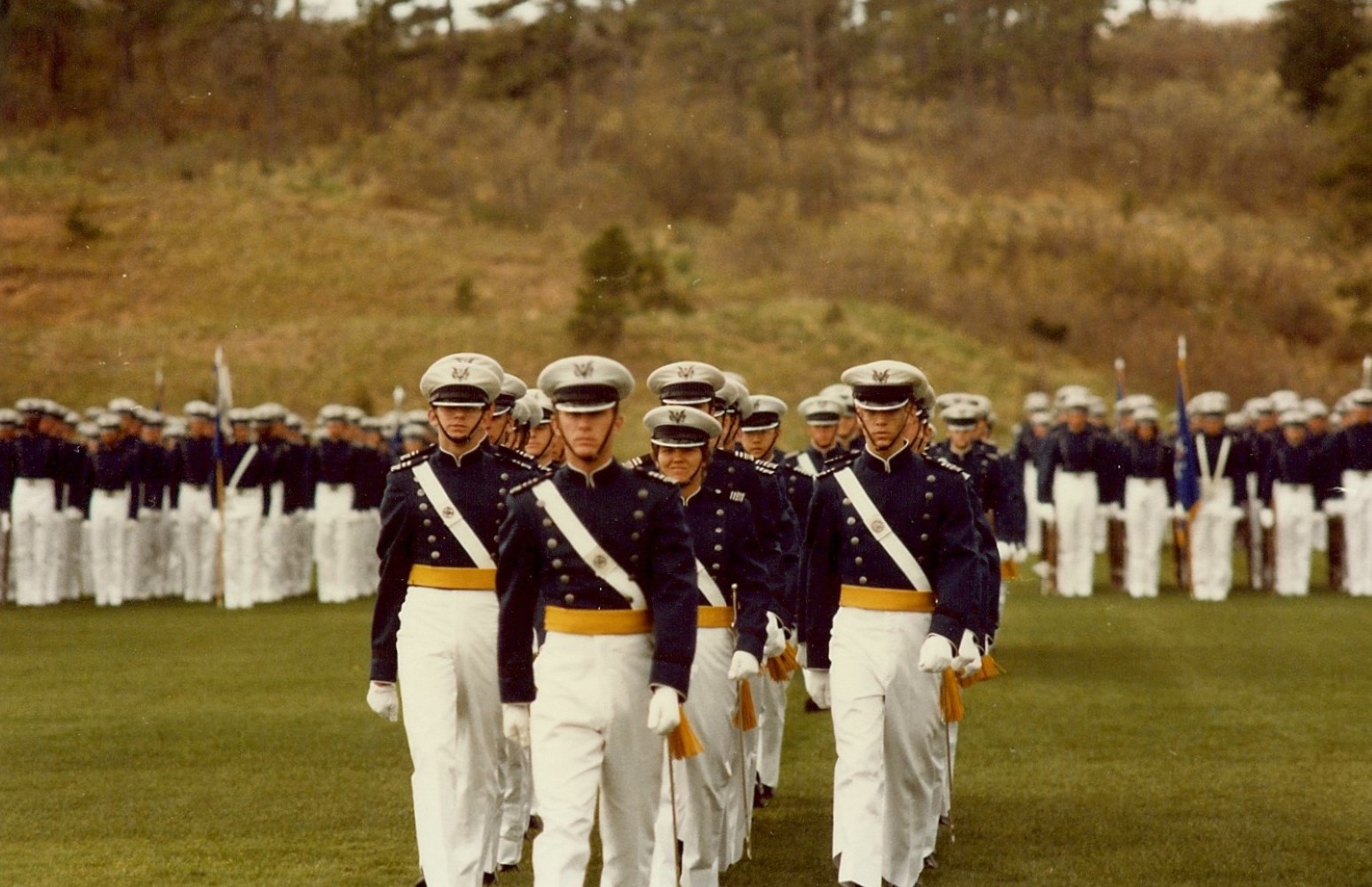 Durst was one of the first women to graduate from the US Air Force Academy. Image: Kathi Durst

“After graduating from the US Air Force Academy,” Durst says, “I was commissioned and attended pilot training at Williams Air Force Base in Phoenix, Arizona. It had only been a year that women were in each of the pilot training classes — usually two or three in each class of seventy. My Air Force career was from 1981–1988 and long before the “Don’t Ask, Don’t Tell” policy. I finished in the top 10% of my class, which by definition made me “fighter qualified”, but was unable to be awarded the F-16 that I so wanted to fly because laws didn’t yet allow women to fly fighter, attack, or reconnaissance aircraft. That wouldn’t change until I separated from the service. So, I elected to come right back as a Northrop T-38 flight instructor as the next best thing since it was supersonic, acrobatic, flew four-ship formation, and at low levels screaming around at 400 miles per hour just 1000 feet above the ground!”

However, the 1980s were not a welcoming time for a lesbian to be serving in the US military. “While I loved the Air Force and was proud to serve my country, I knew the government was aware I was a lesbian,” Durst notes. “While I might have been allowed to serve nineteen years it was probable that I would eventually be dishonorably discharged before I completed twenty years, losing any pension or benefits I might have earned.” That story was a common thread throughout the history of LGBTQIA military service people before and during the Don’t Ask, Don’t Tell years. 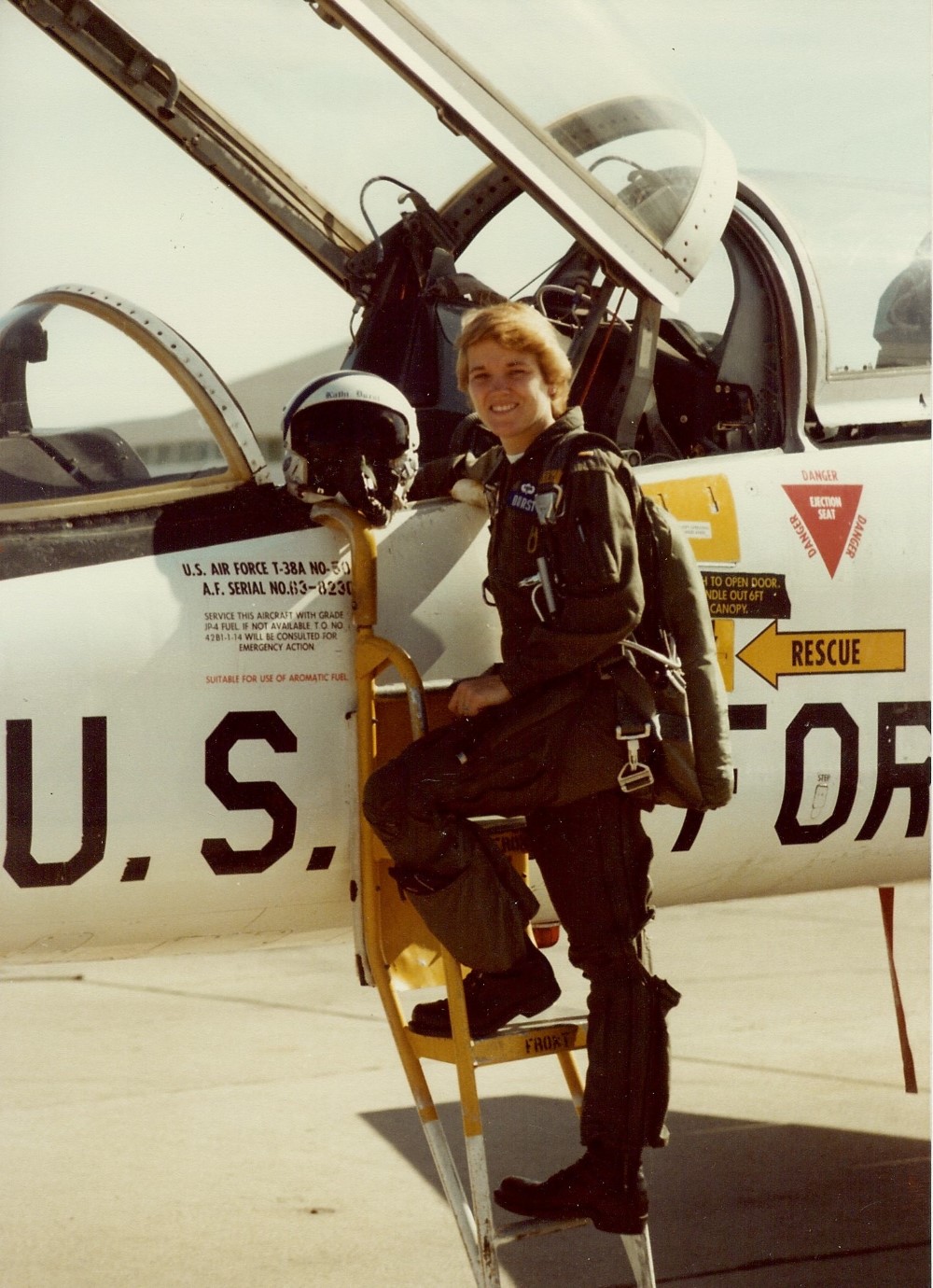 Durst, however, landed on her feet — or, rather, on commercial aircraft gear. “I was blessed to be immediately hired by American Airlines following separation from the Air Force [in] the summer of 1988. American was my first choice of companies because I knew they always had a focus on diversity. Not knowing the lay of the land, however, I remained closeted for my probationary year. Throughout the years I have flown as a flight engineer on the Boeing 727 and Douglas DC-10, upgraded to copilot in 1990 on the McDonnell-Douglas MD-80, followed by the Boeing 757/767, and finally upgraded to captain in 1999.”

Durst is currently one of American Airlines’ Chief Pilots for the Dallas/Fort Worth base, and is type-rated for the 727, 737, 757, 767, and Airbus A300. “Being one of four chief pilots at the Dallas/Fort Worth airport is an incredible opportunity to effect change. Ours is the largest crew base of any airline in the world. Not only do I get to interface with our 3,000 pilots, but I also have the opportunity to interact with other departments throughout the company. My job as a chief pilot is to make the work environment better for the pilots. To that end, I focus on ‘helping pilots live their lives and do their jobs’, the mantra passed down from our managing director of line operations, Captain Mark Cronin. The list of tasks is never-ending but the two areas that rise to the top are solving pay issues and highlighting procedures and policies that should be revised.” 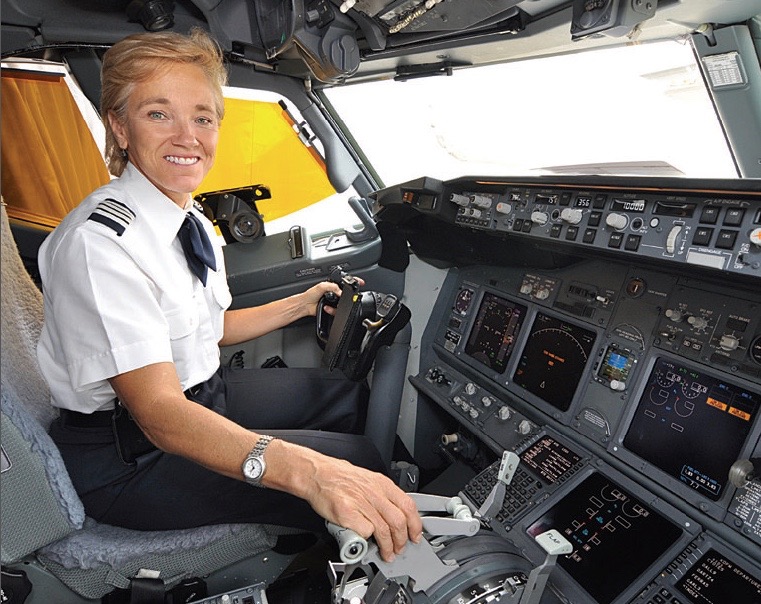 But while closeted in her first year at American, Durst found herself defending homophobic comments generally directed towards the male flight attendants in the cabin. “In the late 1980s and early 1990s, it was also obvious that many male captains, particularly the older ones that had never flown with women, didn’t care to have female pilots as part of their crew either. As I had done at the Academy, my response was that we were here to stay and it wasn’t my issue to deal with. Besides, I knew that they would be retired in the next five to ten years.”

In addition to the airline’s corporate support, Durst says, “in June 1994, a handful of devoted American employees — and advocates for the inclusion of LGBT workplace interests — formed the Gay and Lesbian Employees of American (GLEAM), the very first Employee Resource Group. Since then, not only has the group been the prototype for a successful Employee Resource Group for those groups that followed, as well as advocates for employees, GLEAM (now called PRIDE) advocated for American as the company for prospective talent to work for, and for LGBT customers and suppliers to do business with.”

“That’s not to say it made it cheery in the cockpit,” Durst notes, “but it formed a platform to be completely out knowing the company was fully supportive of every employee. We were safe (and encouraged really) to live truthful, transparent, and authentic lives while enjoying the freedom and opportunities to advance in our careers without fear of prejudice.” 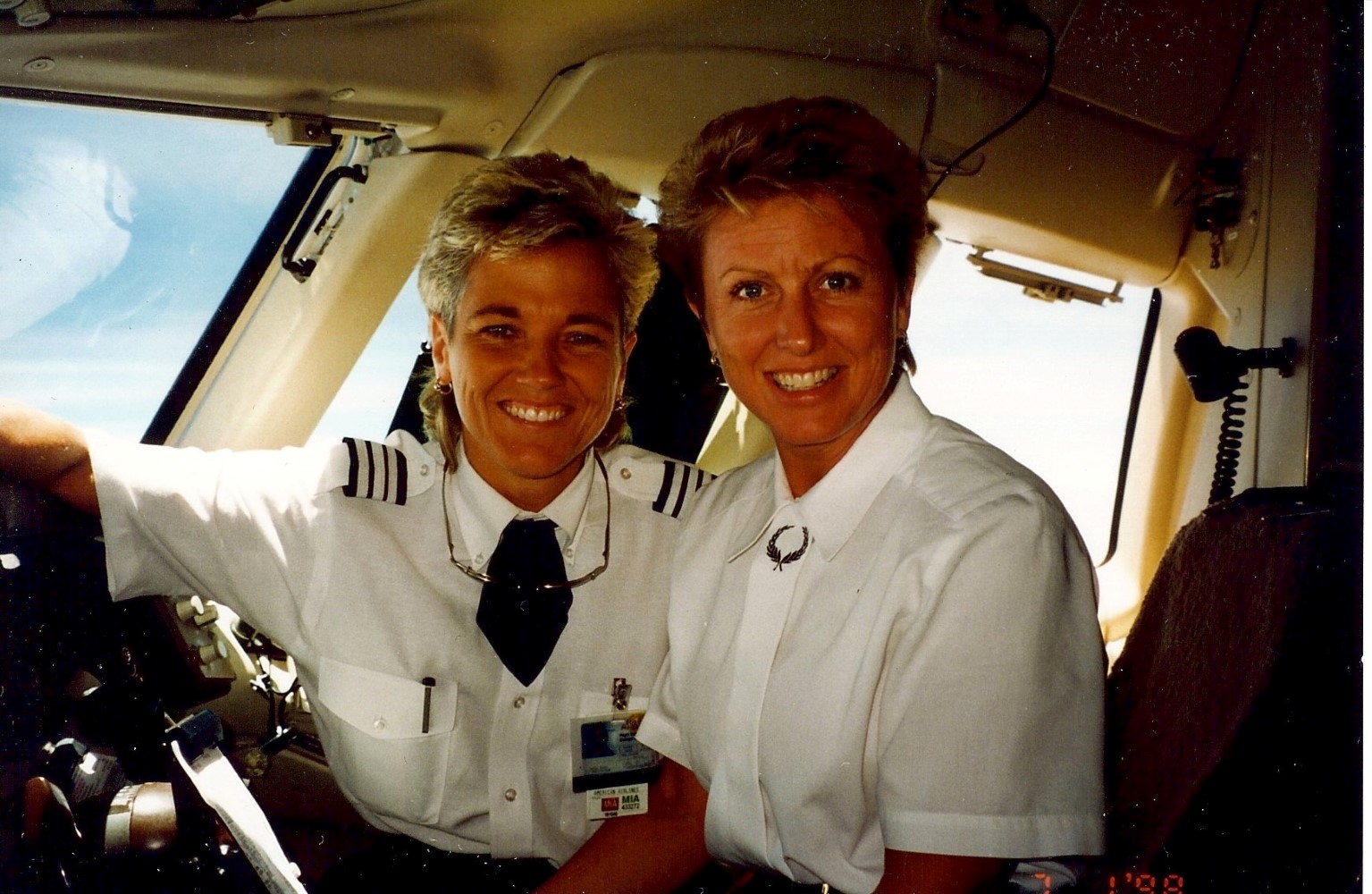 “American Airlines is the gold standard for diversity and inclusion in the workplace,” Durst says. “We are proud of being the first corporate sponsor of the Human Rights Campaign and have continuously been awarded 100 on their Corporate Equality Index since they began. We are the only airline that can claim that.”

Antipathy towards women and members of the LGBTQIA community continues within the industry, Durst notes. “I’ve become more compassionate through the years to those that are uncomfortable with GLBT pilots or women in general in a male dominated industry. It’s been my experience that even those that are outright homophobic or sexist aren’t going to have their minds changed much through debates at 37,000 feet, nor is it safe to have a conversation go south while flying. I never thrust my sexuality on anyone, but rather wait for the questions that invariably come. I answer as truthfully and thoughtfully as I can. Either they ask more questions or they don’t… I’m happy to follow their lead.”

“I’ve had much greater success in being as pleasant, helpful, and proficient at my job as I can in an attempt to form relationships first,” Durst says. “It’s only then that a closed-minded person begins to question their beliefs. While some of the questions thereafter may become uncomfortable or hurtful, I realize it’s the person’s thought journey that I’m trying to help. I’ve had decades to think about GLBT issues, so it is only fair to give this person time to come to grips with any resistance they may have. In the end though, there will always be the few that will never accept me or the GLBT community. I can accept that.”

Durst is overwhelmingly positive about the future, both in aviation and in society. “I believe every year things improve. Smart businesses realize that diversity of every kind creates happy employees and generate revenue profits. I’m very proud of American Airlines for choosing  me to be the first openly GLBT member as both a Fleet Captain for the 737 and now Chief Pilot. I don’t believe there is any other airline that can claim that. Even greater is that the fact that me being a lesbian never played into the selection process.” 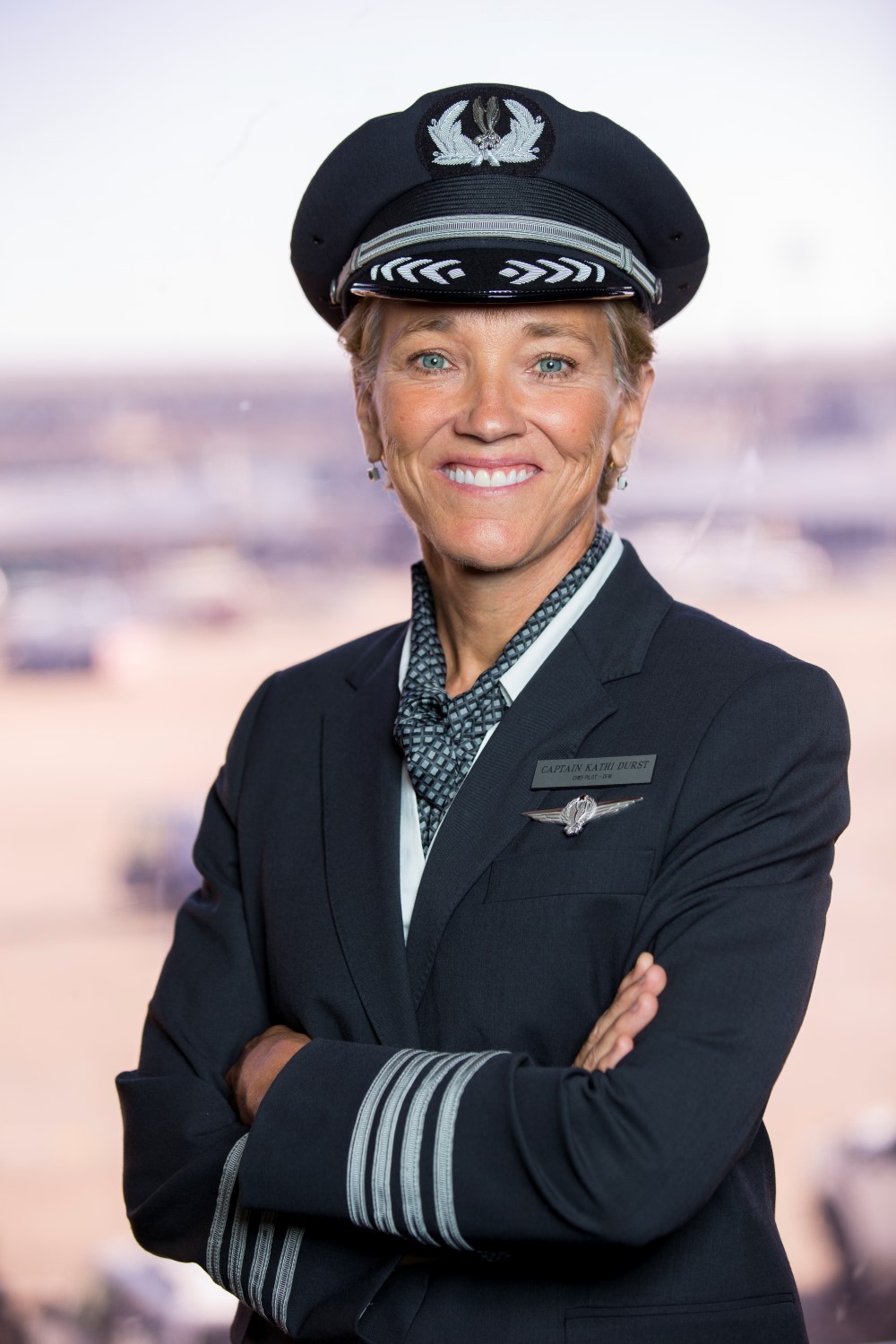 Durst is now a chief pilot at American’s DFW base. Image: Kathi Durst

“The world I envision,” Durst concludes, “considers sexuality or gender identity as just a fact, similar to your home address. Unfortunately we aren’t there yet. It will take continued collaborative efforts by individuals, companies, and organizations like the Human Rights Campaign to continue highlighting that discrimination in any form towards any group is unacceptable — and never in the best interest of anyone or any corporation. If there are any minorities out there reading this, I’d like to end by saying this: It’s never too late to follow your dreams. Don’t let anyone tell you you won’t succeed, because the only way to fail is to quit.” 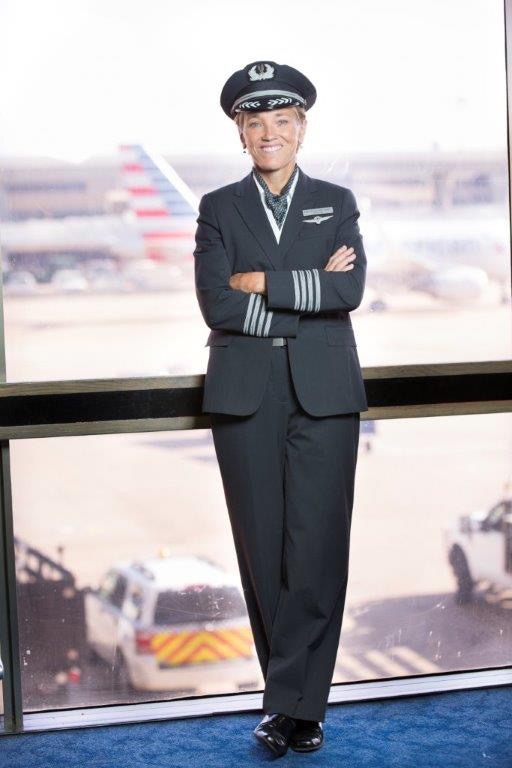 “The only way to fail is to quit,” Durst says. Image: Kathi Durst